Alienware’s M15 R3 is improved, but the competition is better

Share All sharing options for: Alienware’s M15 R3 is improved, but the competition is better

Alienware’s M15 R3 is a solid gaming laptop to introduce, or reintroduce, yourself to what the Dell-owned company is capable of these days. It’s a big improvement over the design of the original M15 released a few years ago, brushing away some of the try-hard LEDs and angular design for a thinner and more sophisticated look.

Don’t get me wrong, this is still very much a Gaming Laptop, clad with backlit keys, honeycomb-shaped air intakes, and a strip of LEDs surrounding its rear fan outtakes. Essentially, it’s a slimmed-down version of the humongous, modular Area-51M. But it’s built to attract gamers that want a slightly more refined and minimal look than what Alienware has been known to produce. With this, and support for high-end specs like a 300Hz refresh rate display, Dell shows that it’s tapped into what more gamers demand from a laptop.

There are familiar setbacks here that should raise an eyebrow if you’re considering other high-end options. For instance, this laptop (like its predecessor) has its RAM soldered onto the motherboard, preventing you from upgrading it in the future when it starts to get bogged down. And Alienware’s 32GB cap when you’re buying the machine is too low for 2020 standards, let alone the demanding games that are coming in the near future. Razer’s Blade 15 and the MSI GS66 Stealth are both comparably priced machines that let you easily add more RAM and storage after purchase — and they’re thinner than the M15 R3.

The battery life is also seriously lacking. It’s not wise to ever expect miracles in this department with gaming laptops, especially for one with a 300Hz refresh rate display. But even when I’m doing productivity tasks with balanced battery usage and lowered brightness, the six-cell 86Wh battery tanks in about an hour. The aforementioned GS66 Stealth that I reviewed has a 99Wh battery, and despite being a thinner laptop with a 300Hz refresh rate display and some faster specs, it somehow manages to last around five hours before needing a charge. Less demanding configurations of the R3 probably fare better (knocking the display’s refresh rate to 60Hz doubled the battery life to two hours, but that’s also nothing great), but it’s clear this laptop generally isn’t well-suited to be used on the go.

Our review of Alienware M15 R3 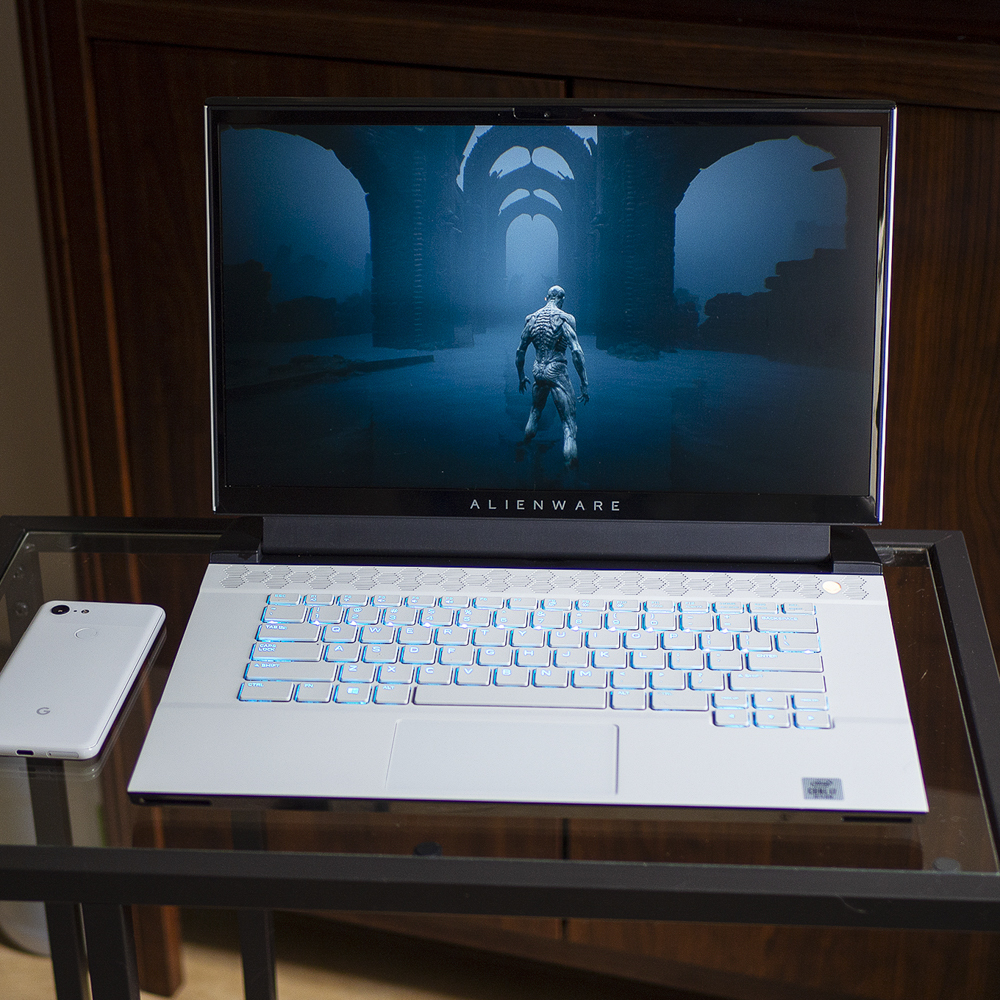 The M15 R3 serves up a few minor improvements over its predecessor, the M15 R2. For instance, cooling has been an issue for this lineup in the past, but this machine is able to keep relatively cool while it’s sitting on my lap. Its redesigned fans have more blades, and Alienware increased the amount of copper in the cooling system to better dissipate the heat. Granted, its fans still blast out very toasty air away from you, and the rear parts of the laptop are still too hot to touch after a while of playing games, but this newer design turns cooling into far less of an issue than before. Another new feature is the microSD slot along the laptop’s right edge.

You can spec this machine to be really powerful, with the latest 10th Gen Intel Comet Lake H-series processors, Nvidia RTX 20-series Super Max-Q graphics chips, and up to 32GB of RAM (the previous iteration topped out at 16GB). The 1080p display has a 144Hz refresh rate with a 7ms response time by default, but you can opt for an even faster 300Hz refresh rate panel with a 3ms response time, or go whole hog with a 60Hz 4K OLED screen with a 1ms response time.

For this review, I couldn’t resist testing out the fast 1080p 300Hz refresh rate panel, with Intel’s Core i7-10750H six-core processor, a full-powered RTX 2070 graphics chip (not the Max-Q version), and 16GB of RAM. Again, this isn’t the ceiling for the R3, more the middle-of-the-road option for serious gamers. But I wanted to check out something around the $2,100 price range because that’s a space where Alienware has some tough competition.

These specs provided consistently smooth gaming performance with max settings switched on for games like Death Stranding, Control, and new releases like Mortal Shell, to give a few examples. It’s also sufficiently fast for a mix of heavy Chrome usage, along with several other apps open concurrently. Even apps like Adobe Premiere Pro that take full advantage of your CPU and GPU aren’t a tough match for the R3. In our export test, this machine exported a five-minute, 33-second 4K video in three minutes, 42 seconds. It’s a solid result whenever the export speed outpaces the length of the video itself by this large of a margin.

Gaming performance is also great, and its full-powered RTX 2070 chip seems to make up for the fact that it isn’t a newer RTX 20-series Super Max-Q chip. Though, if your mind is set to amping up all of the ray-tracing features in games that support it, that’s unsurprisingly where this particular M15 R3 configuration starts to show some signs of weakness. In Control, having all ray-tracing capabilities switched on kept the frame rate around 40 frames per second with Nvidia’s AI-assisted DLSS feature turned off. Though, either turning on DLSS or just turning the ray tracing features down boosted and stabilized the frame rate, as expected.

You could take advantage of this laptop’s eGPU support down the road if you get your hands on an Nvidia RTX 3080 (along with Alienware’s $229 Graphics Amplifier that’s required to connect it). However, due to PCIe bandwidth limitations of its rear amplifier port, there are diminishing returns going this route and it might not perform that much better than the laptop’s built-in GPU.

The display on the R3 is great. As mentioned, this unit has the 1080p 300Hz refresh rate display, and it’s technically capable of showing your games running at up to 300 frames per second (despite a lot of horsepower in this machine, few actually get that high). Even during the most frenetic action in-game, the image was crisp with minimal tearing, bright at up to 300 nits, and color-accurate with 100 percent coverage of the sRGB color gamut.

To start using the Alienware M15 R3, you’ll need to agree to the following:

Final tally: there are five mandatory agreements and 14 optional agreements to use the M15 R3.

Lastly, I want to give credit to Alienware for its keyboard. Not only is it comfortable to type on, the keys are spaced in such a way where I personally make very few mistakes while typing. That’s not something I can usually count on with a gaming laptop. The trackpad, on the other hand, is far too small. What little that’s there is good (it supports the suite of Windows Precision gestures), but it’s a shame that Alienware didn’t go with a wider trackpad, like on the MSI GS66 Stealth.

Every laptop has its share of perks and trade-offs, but the M15 R3’s are tough to overlook. You might love or hate the design or that most of the ports are on the back of the laptop. But it’s less disputable that for the $2,136 that this configuration costs, you can get a better-engineered laptop that’s thinner with comparable specs. Both the Razer Blade 15 and MSI GS66 Stealth that I mentioned before come to mind as good options that can let you swap RAM and last longer when it comes to battery life.

If you have just a little bit more to spend than this Alienware configuration, there’s a GS66 Stealth configuration that includes an eight-core Intel Core i7-10875H processor, an RTX 2070 Super Max-Q graphics chip, with 32GB of RAM for around $2,350, though the amount of default storage is less at 512GB. Still, if you already have the money to get the Alienware, I think those additional upgrades are well worth the extra cost if you want to future-proof your gaming laptop investment as much as possible. And why wouldn’t you?

All in all, the Alienware M15 R3 doesn’t suffer from too many fatal flaws. It’s just that the competition is getting that much better, and the likes of Razer and MSI one-up Alienware’s offering with thinner design, better battery performance, and more comprehensive upgradeability. If the company can make its next iteration go more toe-to-toe in those departments, it’ll be a real contender.