A full-frame camera that fits in a fanny pack

When I first heard about Sony’s new A7C, I thought it was just a parts-bin camera — taking a lot of good things about the Alpha line and putting it into a new design. On paper, that’s exactly what the $1,800 A7C is: it’s the sensor, processor, and autofocus system of 2018’s A7 III in a body that’s closer in size to the A6600.

But what I didn’t realize is just how enjoyable it is to shoot with a full-frame camera that is actually small in size. I can stash it quickly into a small bag just like a small camera, but I don’t have to give up a large sensor or access to Sony’s line of great full-frame lenses. Other features stand out, as well: the sweet articulating screen that lets me easily vlog or the port compartments having actual doors instead of those bad floppy plugs. This camera may be small in size, but it’s a little ripper.

Our review of Sony A7C 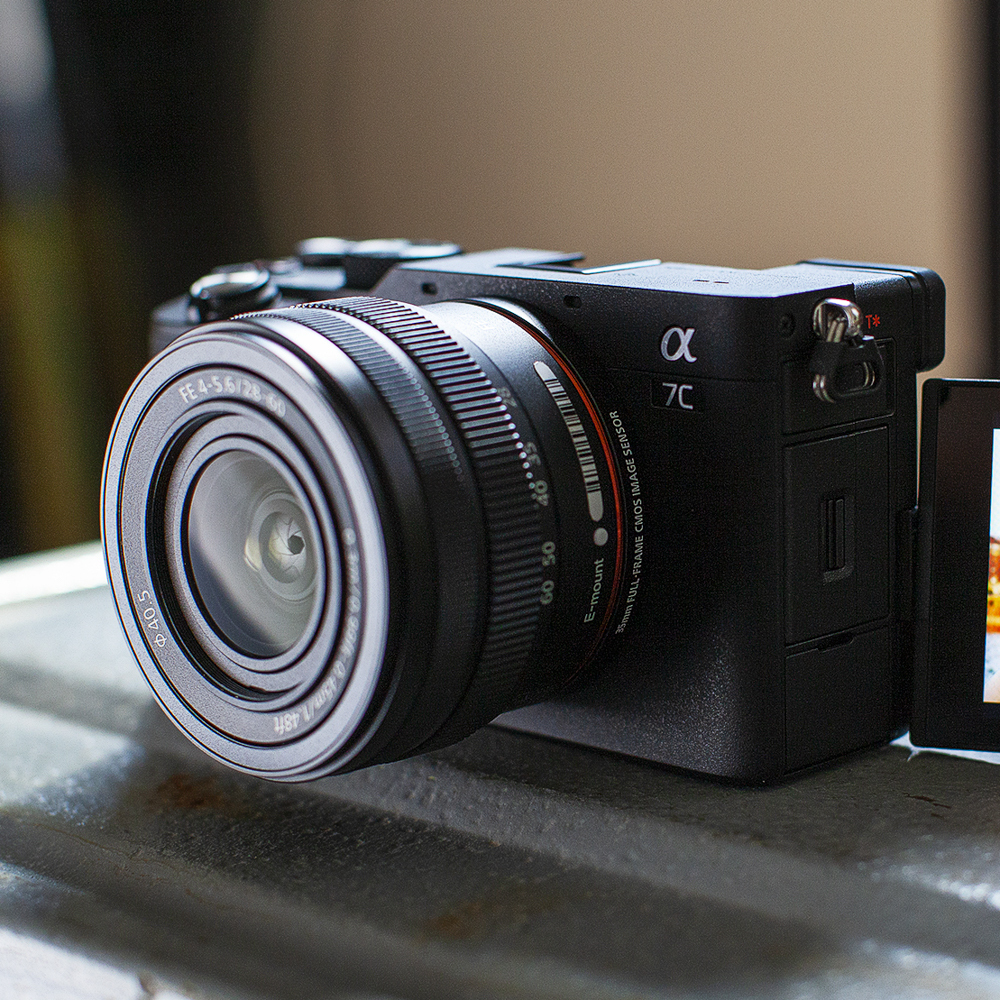 The A7C is a confusing addition to the Alpha lineup that started in late 2013 with the release of the A7 and A7R. Since then, we have seen eight more full-frame cameras launch in the line, all with essentially the same design. The surprisingly compact A7C breaks that mold. It looks a lot like Sony’s lower-tier APS-C line than the other A7 models, mostly due to the viewfinder being moved to the far left. This makes it shorter and therefore easier to jam into a bag to tote around.

Before I got my hands on the A7C, I was truly worried it would be too small, like my fingers would slip off the grip and there wouldn’t be enough weight for counterbalancing those large, full-frame lenses. But I’m happy to report it is the perfect sort of small. This camera fits in my Moment Fanny Sling with the 24-70mm Sony G Master lens on it. Overall, it isn’t annoying to carry, yet it still feels solid and doesn’t slip out of my hands. Being able to run around Brooklyn with a 24.2MP CMOS sensor and G Master lens for hours without feeling like I’m shlupping hella gear around was magical.

All of that being said, this camera is not exceptionally small and certainly not pocketable. It is just smaller relative to other full-frame cameras. And once you put a typically large full-frame lens on it, a Sony A6600 with an APS-C sensor will feel a lot lighter.

In addition, Sony finally did away with the hanging rubber flaps that cover the ports on other A7 models. They took literal precision to put back on and were always hanging in the way. There are now hinged doors that cover a mic port, a headphone jack, a micro HDMI port, a USB-C port, and one SD card slot. These are easy to open and easy to close, but best of all, the articulating screen isn’t blocked when a microphone is plugged in.

The fully articulating screen is easy to whip out, flip around, or position to your needs, yet feels sturdy. I never noticed a lag in the screen rotating as I adjusted its position, and the touch control, although limited to just tapping to set a focus point, is responsive. Being able to so easily turn that screen around truly led to me taking a lot more selfies because I could do it so quickly. Even in bright light I was still able to see myself in order to frame the shot.

Selfies on the A7C

Almost all of the buttons on the back are on the right-hand side, which means you can control the camera entirely with one hand. I do wish there was a third dial on the front of the camera, under the shutter button, for use with my pointer finger. An ISO dial there would make dialing in settings in challenging light situations much quicker.

I love the big, programmable red record button on top and the battery compartment being solely for the battery, not also an SD card. This means I don’t have to take the camera off the tripod or gimbal to pop in a fresh SD card, though it would have been nice to have two SD slots for backups or more recording time.

The only hardware issue for me is the menu button placement. I totally get that the articulating screen needs a groove for pulling it off the camera back, but the menu button would have fit perfectly right where that notch is or even right below the exposure compensation dial. It would be more convenient to use if it was anywhere but in the exact middle of the camera, right under the hot shoe.

This placement is not convenient for either of my thumbs to push: when reaching for it with my left thumb, the EVF sensor is triggered and the display switches to the EVF, and then the button is just a tad too far to reach with my right thumb without having to really grip the camera with both hands. And because the menu button also acts as a back button within the dreaded Sony menu system, using it really feels like a chore.

And yes, the A7C still uses the old Sony menu system we all love to hate. I was really hoping to see the new menu system that Sony debuted in the A7S III in this camera, which allows for touch screen controls and provides a new layout, but sadly it’s not here.

I spent most of my time taking photos with the A7C which, as a video-first person, was surprising for me. Between Sony’s real-time autofocus system, which is one of the best autofocus systems available right now, and being able to shoot 115 RAW images at up to 10 frames per second, I was quickly addicted to this camera’s speed. The ISO can range from 100 to 51,200 and extend all the way up to 204,800, but in my use anything past ISO 12,800 started to show a lot of smoothing and noise. That is still a huge range, though, and is the main advantage you get from the A7C’s full-frame sensor compared to smaller formats. I felt very comfortable leaving the auto ISO setting on max ISO of 10,000, knowing the image would be crisp throughout. All of this is familiar territory, though, as the A7 III from two years ago had effectively the same specs and capabilities.

In the standard color preset, JPEGs are bright, vivid, and very crisp. To push the camera’s dynamic range, I began blowing out the highlights and taking photos of really colorful objects, which resulted in extremely vivid colors and lots of contrast without having to edit the photos. I really started to like this look.

Of course the lens you put on will affect the look of your images, but with a good lens, like the $2,200 24-70mm f/2.8 G Master I’ve been using, it was hard to take a shot I wasn’t happy with. Sony also released a new kit lens with the A7C that’s available in a $2,100 bundle. It’s a 28-60mm f/4-5.6 pancake zoom lens. It’s very compact and has a decent focal range, but it’s plasticky and that slow aperture really doesn’t show off this camera’s best self. For $500, though, it does make for a great entry-level lens into the E-mount world where lenses can get very large and very expensive.

On the video side, there isn’t too much new here. The A7C can shoot 4K 4:2:0 8-bit video at 24Ffps and 30fps, but to get 120fps or even 60fps, you will have to drop down to 1080p. There is in-camera stabilization, but it’s the standard Sony five-axis system which, while good, is nothing to write home about. I still needed a gimbal to get super buttery shots, and I find that Sony’s in-camera stabilization is more effective in combating hand shake when taking photos at lower shutter speeds than for shooting smooth video. The better camera for video in the Alpha line is definitely Sony’s A7S III, which can shoot up to 4K 4:2:2 10-bit video at 120fps — but those specs will cost you $3,500, or nearly twice as much as the A7C.

There is also still a rolling shutter problem, causing the image to bend when you pan from side to side. It is very noticeable when shooting handheld, which doesn’t make this camera the best for professional video work. Check out the video at the top of this article for sample footage.

The A7C’s battery life is solid. I could record in 4K for well over an hour and a half (with no overheating) before the battery died. Running around Brooklyn, taking mostly photos and the occasional 4K video clip, I was making it through a full day with one of the A7C’s NP-FZ100 batteries.

The powerful autofocus and 10 frames per second burst mode makes the A7C fast. The big sensor and ability to shoot at high ISO makes it good in low light. But what makes this camera special is that experience in a smaller body. It’s being able to whip this out of a small bag. It’s being able to carry it for hours without noticing. It’s flipping that screen around and taking selfies instantly. It’s all of that paired with those specs and capabilities that makes this camera worth talking about.

At $1,800, the A7C does not have a small price tag. It is a lower-cost, full-frame camera, which makes it slightly more accessible to hobbyists and those just getting started. But it’s not as aggressively priced as Nikon’s Z5 or Canon’s EOS RP.

Sure, the A7C is also a parts-bin camera — basically an A7 III from 2018 in a smaller form factor — but those parts are proven and that doesn’t take away from the A7C’s charm.