It’s a good phone, but it costs too much

The Samsung Galaxy Note 20 is a good phone, but don’t buy it at its advertised retail price of $999.99. It’s a fine phone if you can find it for less, and hopefully you can because the only other phone with a stylus that matters is the very expensive Galaxy Note 20 Ultra.

Luckily, Samsung phones usually end up getting discounted early and often in their lifecycle, and the Note 20 is no different. Just under two months since it was first announced, the Note 20 is already available unlocked for $800 at various retailers.

We often advise against buying Samsung phones right away because those discounts are so predictable. There’s no reason to spend an extra $200 if waiting a month or two will save you that cash. But with the Note 20, it’s not just about saving money — it’s about not getting taken to cleaners.

At $800, the Note 20 is a good value. But it is also surrounded by phones that cost that little or less with features and specs that match or exceed it. So, as always with the Note, the question really does come down to how badly you want that S Pen.

Our review of Samsung Galaxy Note 20 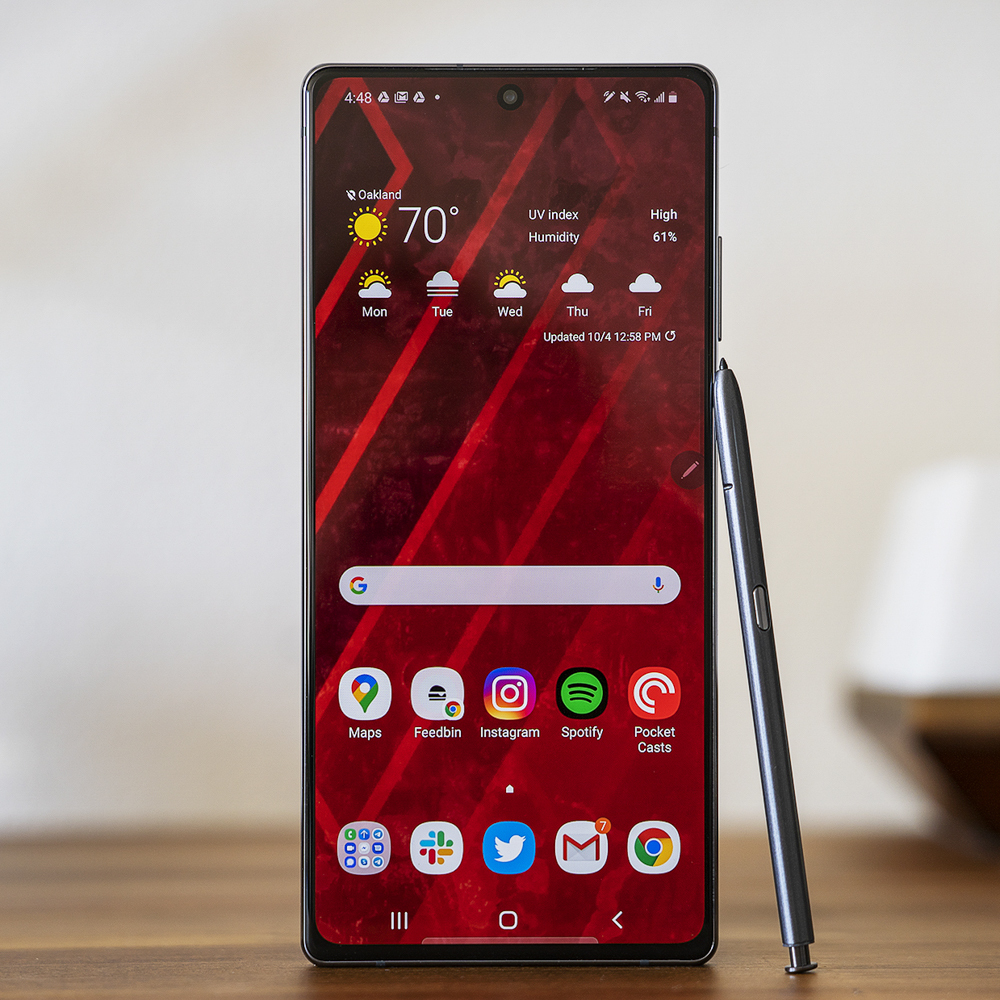 On first impression, the Note 20 looks like typical Samsung Note hardware. It has a big, vibrant screen with small bezels, squared-off sides, and that S Pen at the bottom. The fit and finish should be more than good enough for anybody.

But when you start to look a little more closely, you can see that even though the phone’s corners are square, other corners have been cut. If you were assuming that the Note 20 was just a smaller version of the Note 20 Ultra, I’m sorry. It’s very much a lower-specced phone.

Specs aren’t everything, and most of Samsung’s changes don’t really bother me. But there is one that’s annoying: the screen is only 1080p, and it doesn’t have a high refresh rate. 120Hz is really the norm now for any phone that costs this much.

It’s a small difference and one that really won’t bother you — except for moments when you think about how you paid a lot for a phone that ought to have a faster refresh rate. Samsung’s other phones in this class all have it. Even the recently announced Galaxy S20 FE does, and it retails for $699 — $300 less than this Note. One thing that may add to the Note 20’s price is its faster and more accurate in-screen ultrasonic (as opposed to optical) fingerprint sensor.

The screen is 6.7 inches, and I find it to be a really good size for a Note style phone. It’s big enough to feel expansive but not so large that the whole phone is overwhelming. It’s also a completely flat display. That makes the bezels around it slightly larger but still very tiny. I think that’s worth the trade-off for slightly fewer accidental touches.

The rear of the phone is plastic instead of glass, but it doesn’t really suffer for it. There’s also no expandable storage, and the Note 20’s cameras are less impressive on paper than the Ultra’s. Then again, the Note 20 has a completely normal, non-mesa-like camera bump.

Other than screen size, really the biggest performance difference between the Note 20 and the Note 20 Ultra is in the camera system. The Note 20 goes with a couple of standard 12-megapixel sensors for wide and ultrawide and a 64-megapixel for telephoto.

The 64-megapixel is there so Samsung can use its sensor cropping tricks to enable 30X zoom. Unfortunately, those tricks aren’t up to the task of 30X, but I do think they offer better-than-average performance at 10X. Samsung ought to find a way to emphasize those middle zoom ranges instead of focusing on the wacky 30X one. Set people up to be delighted, not disappointed.

As for the main sensor, it’s exactly in line with Samsung’s S20 phones this year. In terms of capturing detail, it’s in the same ballpark as other flagship phones, though I still think Samsung tunes its images to be too bright and cranks up the vibrance two ticks too far.

I actually prefer these 12-megapixel sensors to Samsung’s early attempts at ultra-high resolution sensors. They’re a known quantity, and I can get really good shots without worrying about focus speed. The same goes for video: it’s right in line with what’s expected from a Galaxy S20. No surprises, but predictability is an underappreciated feature in cameras.

Sadly, the selfie camera’s penchant for smoothing faces even when I’ve turned off every possible filter is also predictable. I wish Samsung would get on board with Google’s call to eliminate these defaults for good because they’re potentially harmful to people’s self-image.

The Note 20 has the same software as the Ultra — both for better and for worse.

I continue to be impressed with how full-featured Samsung Notes is and also with how well Samsung supports the S Pen. There are just lots of little interactions that are made easier or nicer with the S Pen. Selecting text, screenshotting a specific section, and jotting a quick note on the lock screen are all features that you shouldn’t buy a phone just to get, but if you have them, you’ll likely find they improve the experience immensely.

I wish I could say the same about the rest of Samsung’s software, which feels like it’s constantly looking to earn Samsung a penny or two via advertising or promoting Samsung’s own services. I wasn’t fully barraged with many notifications pushing me to try one service or another, fortunately. But I still would open up an app like Samsung Health and suddenly see an ad in the header area.

It’s a shame, too, because Samsung was heading in the right direction with One UI for the past few years. The interface uses big headers to bring buttons down closer to your thumb. It introduces little shortcuts all over that you will come to depend on — like Edge Panels, a little dock on the side of your phone where you can scurry away clipboard history, your daily calendar, the weather, or apps you want to quickly launch.

The Galaxy Note 20 is a very good phone at the very wrong price. That isn’t just some flagship-loving tech obsessive talking, either. Samsung makes the very same point with the Galaxy S20 FE. Unless you want a stylus, the S20 FE is a superior phone that retails for $300 less.

Luckily, as I mentioned above, Samsung phones are often available at a discount. If you can find the Note 20 for around 800 bucks, that’s a good price. I love the idea of Samsung finally finding a way to offer a truly good midrange phone with an S Pen. In theory, that’s what the Note 20 should be. In practice, it tries to straddle being a flagship and a midrange phone and doesn’t get either one right.

To use the Samsung Galaxy Note 20, you must agree to:

There may be others. For example, I already had a Samsung account, so I didn’t need to agree to more terms for that. Samsung’s Weather app also has its own privacy policy that may include sharing information with weather.com.

Final tally: there are four mandatory agreements and at least four optional ones.