Bose’s original true wireless earbuds, the SoundSport Free, sounded fantastic but were foiled by connectivity problems and audio / video sync issues that the company never fully resolved. They also lacked active noise cancellation, which is the feature that Bose built its entire brand around. This allowed Apple, Sony, and others to seize the market with products like the AirPods Pro and WF-1000XM3 earbuds.

Our review of Bose QuietComfort Earbuds 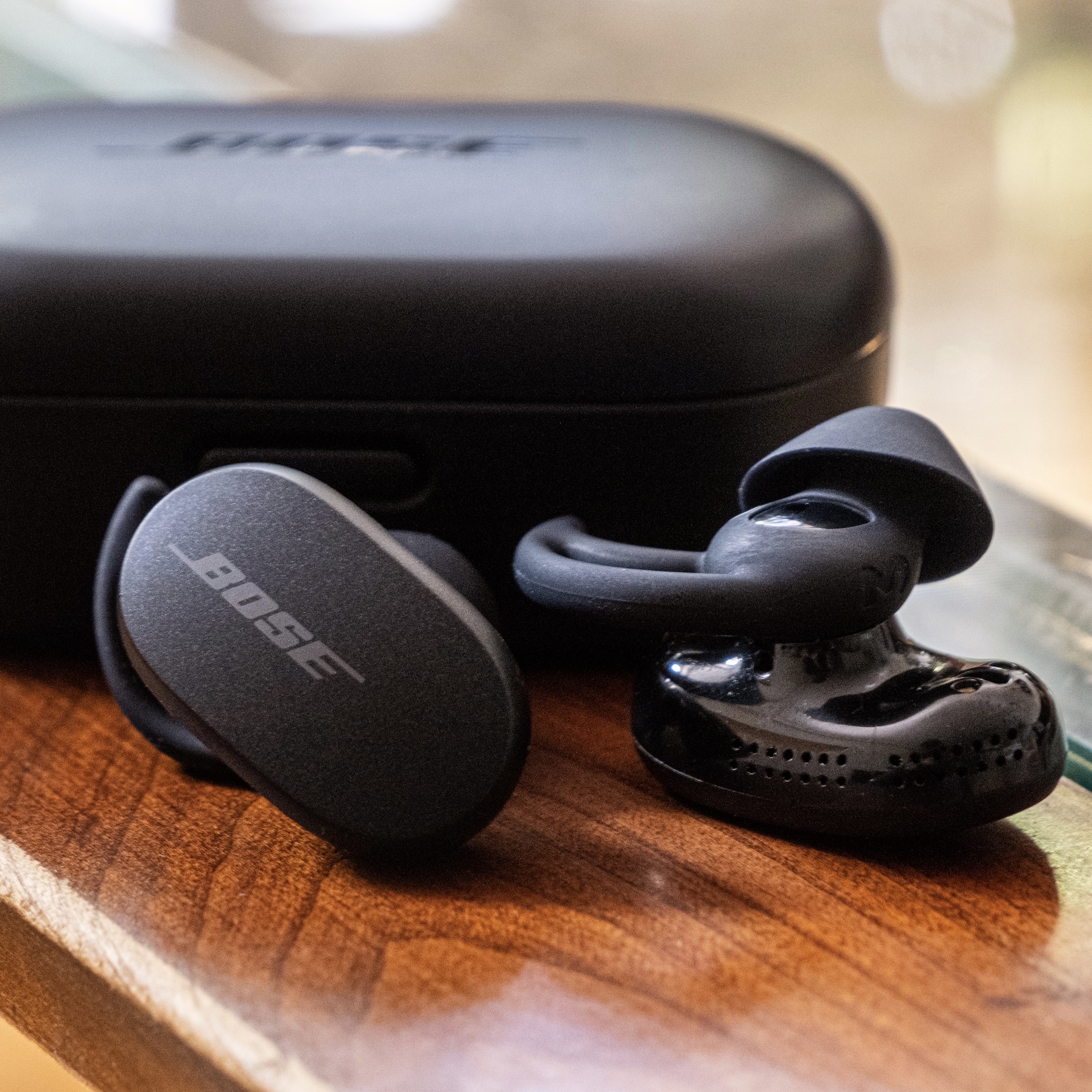 The big question is how much that’s worth to you. At $279, the QuietComfort Earbuds are a $30 increase over the AirPods Pro and in striking distance of Sennheiser’s $300 Momentum True Wireless 2. And while Bose has avoided any inherent flaws with the earbuds themselves, there are still minor annoyances like an awkwardly large carrying case and limited onboard controls that lack much customization.

At 0.3 ounces (8.5 grams) each, the QuietComfort Earbuds weigh about the same as Sony’s 1000XM3 buds in the ear, but the AirPods Pro (0.19 ounces, 5.4 grams) have them beat for all-day comfort. Bose’s earbuds are also larger than the AirPods Pro in every dimension and stick out further from the ear — though not to the same silly degree as the SoundSport Free.

But even if they’re not the most discreet or svelte, the QuietComfort Earbuds still feel very good in my ears, thanks to Bose’s StayHear Max ear tips, which have an integrated, flexible silicone wing that tucks into the ridge of the ear for added stability. Both the medium and large-sized ear tips worked for me and created a tight seal, but I ultimately found that mixing the two led to the best extended comfort. (There’s a reason manufacturers suggest trying that!)

Once they’re in place, the QuietComfort Earbuds aren’t going anywhere, and I’d be confident taking them for a run or through an intense gym routine. They’re rated IPX4 for water and sweat resistance, so sweat and the occasional splash of water should be fine, but avoid rainstorms. One thing worth mentioning is the occlusion effect; since Bose didn’t go for a vented design like the AirPods Pro or Pixel Buds with natural airflow, if you have a very tight seal with the QuietComfort Earbuds in, your inside voice might sound louder than normal, and in silent environments, you can hear yourself breathing. I noticed this when I first started using them, but it’s since gone away — either because the fit changed slightly or I’ve gotten used to it. Some people are more sensitive to this stuff than others.

The charging case for the QuietComfort Earbuds is… a lot. It’s nowhere near as compact as the AirPods Pro case or the cases for Samsung’s Galaxy Buds Plus or Google’s Pixel Buds. (The aforementioned Sennheisers also win out here.) I realize this is mostly due to the Bose earbuds’ larger size, but it still makes for an awkward bulge in whatever pants pocket you put them in. The case’s chonk factor isn’t a deal-breaker for me, as I always have a backpack with me for stowing it in. But at twice the thickness of an AirPods case, it could be for some.

Opening the case is more of a process than usual since Bose put in a latch that you’ve got to release by pressing the button on front. This takes firmer pressure than expected and can get annoying at times. On the plus side, you won’t have to worry about your pricey earbuds skittering across the floor if you drop the case. The front of the case has five LEDs to indicate battery charge level; Bose estimates up to six hours of continuous listening time for the earbuds themselves, plus two additional charges from the case. Those numbers are all very par for the course. The case supports wireless charging and has a USB-C port if you prefer to plug in for faster top-offs. (Fifteen minutes of charging can give you two hours of playback time.)

The audio quality and noise cancellation of the QuietComfort Earbuds easily outweigh the headaches from dealing with their awkward case. Bose has taken a noticeable lead over competitors and is nearing the noise cancellation effectiveness of full-size headphones. Instead of a simple on / off toggle like the AirPods Pro, Bose lets you choose between 10 levels of noise canceling. At 10, these earbuds do an astonishing job of hushing the world around you — better than Apple, Sony, and other competitors. Street noise just fades away; the constant hum of an air conditioner or the whir of a fan all but disappears. I’m not traveling much by plane at the moment, but I’m certain these would do a better job at muting cabin noise than other earbuds. You can even use the QuietComfort Earbuds in noise-canceling mode even when there’s no audio playing if you’re just looking for some peace and quiet.

On the opposite end, dropping down to zero puts the earbuds into full transparency / ambient mode. Bose has managed to tie Apple at making it almost feel like you’re not wearing earbuds at all. The transparency mode on the QuietComfort Earbuds sounds incredibly natural and will appeal to people who want a better sense of their surroundings when outside. When you take out either earbud, the one in your other ear automatically goes into full transparency — since Bose figures you’re probably trying to hear something. (Music also automatically pauses when an earbud is removed.)

You can double tap on the left earbud to switch between three “favorite” levels of noise cancellation. The defaults are 10, 5, and zero. I didn’t see any need to switch those up, but you can set them to whatever you want in the Bose Music app. Bose also lets you choose your preferred action for a long-press of the left bud: it can either announce battery status or skip to the next song. Unfortunately, that’s where customization of the controls end. These are the controls you’re left with:

Bose introduced the onboard volume controls a couple months after the QuietComfort Earbuds originally shipped, and you’ve got to enable them in the Bose Music app before you can use them — otherwise nothing will happen. I haven’t had any problems with the swipes to adjust loudness, so it’s a nice addition. There’s still no way of going back to the last song with the earbud controls, however.

In my time testing the QuietComfort Earbuds, connection stability between the buds and my phone has been mostly flawless. Maybe that’s the result of upgrading to Bluetooth 5.1 or other internal changes, but either way, it’s a major improvement over the SoundSport Free, which suffered frequent audio dropouts. That’s not a concern this time around. Nor did I notice any audio / video sync mismatches when watching content from YouTube, Netflix, or Prime Video on my phone and laptop. Bose has successfully tackled the main flaws of its original true wireless earbuds.

Bose’s QuietComfort Earbuds can be used by pairing over Bluetooth — but on iOS and Android, you’ll quickly be encouraged to install the Bose Music app for configuring them and setting your noise cancellation preferences. By doing so, you’re agreeing to:

Bose Music collects diagnostic and usage data, but you can opt out of this in the app’s settings menu.

Sound quality is still top notch. Bose isn’t shy about sculpting the audio; the company’s Active EQ boosts low and high frequencies at lower volumes so that music still feels dynamic even when you’re not cranking it. The QuietComfort Earbuds are very bass-forward and pack a wallop for hip-hop and EDM tracks. But the powerful low end also translates well to other genres. To my ears, these have a wider, richer soundstage than the competition (perhaps with the exception of Sennheiser).

Regardless of what genre you’re playing, the highs are detailed without ever coming off as harsh or shrill. Unfortunately, Bose’s app doesn’t offer any way to adjust the EQ for people who don’t love the default sound signature. Custom EQ is an option on the over-ear Noise Canceling Headphones 700, so it’s a bummer not to see it on these premium earbuds.

The QuietComfort Buds also handle voice calls well. They have a “self voice” feature that lets you adjust how much you can hear your own voice on a call so you don’t end up speaking too loudly, and they do a nice job of picking up your voice and reducing background noise so that others can clearly hear you. Only the right earbud can be used standalone for calls and audio.

Unfortunately, Bose didn’t include multipoint in these earbuds, so they can only pair with one device at a time. Simultaneous pairing is still rare for earbuds — and a unique strength for Jabra — but when you consider that Apple’s AirPods Pro can now automatically and instantly switch between Apple devices, the QuietComfort Earbuds definitely take a usability hit. Multipoint is a longtime feature on Bose’s headphones, but for whatever reason, the company’s engineers couldn’t make it work here.

So yes, Bose’s new, almost-$300 QuietComfort Earbuds still have downsides. The earbuds are on the larger side, and their case is an absolute unit. They lack multipoint. But there’s also plenty of good: Bose has leap-frogged everyone in noise cancellation (establishing itself as a leader once again) and come up with great-sounding earbuds that work reliably. Once the world is back to office life and boarding planes regularly, I think that’ll be a compelling combo — assuming you’re not already carrying around a pair of AirPods Pro or Sony 1000XM3s, that is.

Update December 7th 2:30PM ET: The review has been updated to reflect the new onboard volume controls that Bose added to the QuietComfort Earbuds after their release. The overall score remains unchanged.