Plenty of control, if you know how to use it

Share All sharing options for: Sony Xperia 5 II review: the right tool for the right jobs

More than any other smartphone I’ve used this year, the Sony Xperia 5 II feels like a tool. It’s not just that it has a very understated design (though this definitely plays a part), it’s that Sony’s whole approach is to give you as much control over the phone as possible. Control over how it looks, and sounds, and takes photos and video.

Like any tool, though, you get more out of the Xperia 5 II when you’re prepared to put more in. A good workman never blames their tools, after all. But I’d wager that most people who are paying $949 (£799 / €899) for a phone are probably looking for a device that’s prepared to meet them halfway, and can handle most jobs on default or automatic settings. That’s what I want to see if the Xperia 5 II can accomplish.

The Xperia 5 II goes on sale on December 4th in the US, and is available in Europe from this week.

Our review of Sony Xperia 5 II 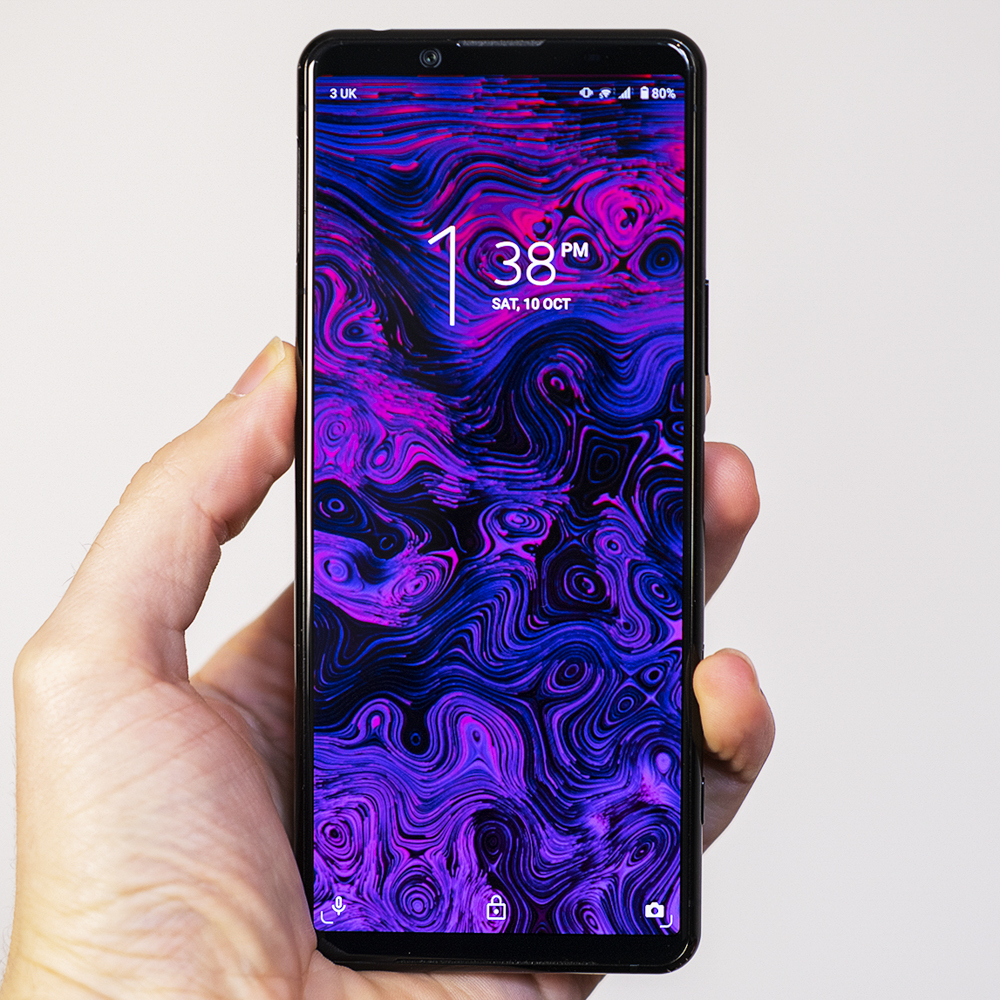 I cannot overstate how much I like the Xperia 5 II’s design. The combination of Sony’s trademark 21:9 aspect ratio with a slightly smaller 6.1-inch display compared to the larger Xperia 1, makes for a pleasantly narrow phone that fits in the hand nicely without feeling cramped to use. This screen is only 1080p this time around, but at this size I don’t think you’re left wanting extra resolution.

At the top and bottom of the display you’ll find bezels a little bigger than many other flagships opt for these days, and that means there are no notches or hole-punch cutouts to speak of. You get a stereo pair of capable front-facing speakers which sound less echoey than their downward-firing competitors.

Up top you’ll find a headphone jack, which is a great inclusion and almost unheard of in a premium-priced smartphone these days, and around back there’s an understated camera bump housing the phone’s main, ultrawide, and telephoto lenses. If you want a phone that’s guaranteed to not turn heads then this is probably it. Like I said, it’s a tool.

Plus a headphone jack up top.

As well as volume controls and a side-mounted power and fingerprint sensor combo button, there are both dedicated camera shutter and Google Assistant buttons on the side of the phone. Given Sony’s photography ambitions for the 5 II, I’ll allow it the physical shutter control, but the Google Assistant button feels unnecessary — especially in a position that’s too low to be convenient to press.

The Xperia 5 II’s screen’s aspect ratio makes it hard to reach the top of the screen when using it one-handed, but you get a lot more useful screen real estate across many apps like Twitter or Gmail. Personally, I like that it gives me enough space to split-screen my Aeropress recipe generator app with a stopwatch app for making coffee, but I’m probably the only one doing that. Beyond its aspect ratio, the HDR-compatible OLED screen is bright, colorful, and a pleasure to watch videos on, and its 120Hz refresh rate means it feels smooth and responsive to use.

Internally, aside from the increasingly-rare microSD storage expansion, you’ll find a typical array of specs for the price, including a Snapdragon 865 processor, 8GB of RAM, 128GB of storage (there’s also a 256GB version, but it’s exclusive to Asia), and a 4,000mAh battery. There’s no support for wireless charging, an annoying omission at this price, and if you’re buying the phone in the US then there’s also no support for 5G (in Europe you get sub-6GHz support, but no millimeter wave).

No wireless charging, and no 5G in the US

Given the state of 5G coverage at the moment, our advice tends to be that it’s not worth paying extra for 5G if a less expensive phone otherwise fits your needs. But on the flip side, if you’re paying $949 for a phone at this point in 2020, then it seems a little ridiculous for it to not to support 5G. The phone has the specs to handle most of the jobs you’re going to need it for right now, but no 5G in the US means it could soon fall behind.

I didn’t encounter any battery problems with the Xperia 5 II. The phone easily got me through a day of working from home featuring plenty of Twitter, Slack, Gmail, and YouTube use, with around 40 to 50 percent of charge left when I plugged it in at night.

Sony’s take on Android 10 is restrained, and mainly consists of giving you extra settings to tweak. (The company was unable to confirm when an update to Android 11 might arrive.) Sony gives you a wild amount of control over the phone display’s white balance settings, for example, and there’s a Dolby Atmos EQ menu in the settings if you want to tune how the phone’s audio sounds. There’s a lot you can customize to make the Xperia 5 II the right tool for your needs.

I wasn’t a fan of the number of apps that come preinstalled on the phone, however. That includes apps like LinkedIn which can be disabled but not easily uninstalled. It’s especially annoying when so much of the Xperia 5 II is designed to put control into your hands.

Sony’s approach to smartphone photography is twofold. First, when left to its own devices, it tends to prioritize accuracy over vivid, colorful photographs. That often results in a less punchy looking image than you get from most phones, but you can always tweak the image in editing after the fact.

The Xperia 5 II has three rear cameras: a main, ultrawide, and telephoto

If you want to fully do things your own way, Sony is also prepared to let you. Its pro photography mode gives you huge amounts of control over how you take photos, giving you an experience modeled after its standalone mirrorless Alpha cameras. There are a lot of controls to dig into if you want them, but they might feel too involved for someone who just wants to point their phone at a group of friends and get a nice photograph.

First, though, let’s talk about hardware. The Xperia 5 II includes three rear cameras; a main camera with a large 1/1.7-inch sensor, an ultrawide camera with a 124-degree field of view, and a telephoto with 3x optical zoom. What’s nice here is that they all have the same resolution, 12 megapixels, which means you don’t see a marked change in detail when you switch between them.

In daylight you get detailed photographs, but these can sometimes look a little flat. It’s accuracy over excitement. Weirdly, the exception to this seems to be people, where Sony’s handset seems to want to brighten your skin and smooth it out, even with the camera’s “Soft Skin Effect” option turned off. Even if you’re using the standard camera app, you still get a responsive eye auto-focus system, and burst shooting of up to 10fps. I found the combination of fast eye-tracked autofocus and burst photography great for photographing pets in particular.

Low light photography is where Sony’s approach to photography is most obvious. By default, the camera app won’t brighten your night shots so much that they look like they were taken in daylight. Instead, you get accurate photos that the camera takes a moment to process each time. It’s a very different experience from a phone like the Pixel 4, where you can tap the shutter button and immediately get a clear, bright photo, even at night.

Swap over to the advanced photography mode and a whole wealth of options opens up. There are white balance, auto-focus, exposure, burst shooting, flash, and HDR settings aplenty, letting you control almost every aspect of your photography. It’s enough that you can get just about any look for your photos if you’re prepared to put the work in, including making night shots look clear as day. But the whole process can be a little involved, and it’s frustrating if you’re someone who just wants to whip out their phone and reliably get a crisp, clear shot every time.

You get a similar level of control when it comes to filming video, where you have the option of recording at up to 120fps slow-motion in 4K. I was particularly impressed with the focus pulling settings, which are fun to play around with. For the most part, though, I think most people will be happy with recording video in the regular camera app.

You can get good photographs out of the Sony Xperia 5 II, but you sometimes have to work to get them to look the way you want. Its cameras are powerful tools, but they’re not going to do the work for you.

Sony has a very particular idea about the kind of phone it wants the Xperia 5 II to be. Although it matches many of its flagship competitors in terms of specs, its most interesting features surround the amount of control it gives you. There are advanced camera features and audio visual modes to really tailor the experience to your needs.

But I think you have to want these advanced settings to justify the Xperia 5 II’s relatively high $949 price tag in the US. At that price it should really include 5G support as well as wireless charging. These trade-offs might be more worthwhile at a lower price, but not with a near-thousand-dollar price tag. In Europe I think the €899 / £799 price makes a lot more sense given you get 5G support, but the lack of wireless charging remains.

Sony’s Xperia 5 II feels like a very capable tool, but it’s expensive and sometimes makes you work to get the most out of it. That makes it the right tool for plenty of jobs, but not necessarily the right tool for a smartphone’s job.

To use the Sony Xperia 1 II, you must agree to:

Other features like Google Pay and Google Assistant may require additional agreements.