The 5G is nice, but the improved processor matters more

The Google Pixel 4A 5G is a good phone for reasons that have almost nothing to do with the “5G” in the name. The ostensible reason for the phone to exist is to offer 5G connectivity to customers who want a more affordable phone. It starts at $499 for most carriers but costs $599.99 on Verizon. But the actual reason to buy one is much simpler: it offers a big enough screen, great cameras, and a decently fast processor. It even has a headphone jack.

Phones with some of those attributes aren’t necessarily in short supply, even at the $499 price point Google has targeted. But few can match the Pixel’s photo quality or guarantees of timely updates.

Like the standard $349 Pixel 4A, the Pixel 4A 5G is an inexpensive way to get in on features usually reserved for top-tier smartphones. But as with any phone, there are trade-offs.

Our review of Google Pixel 4A 5G 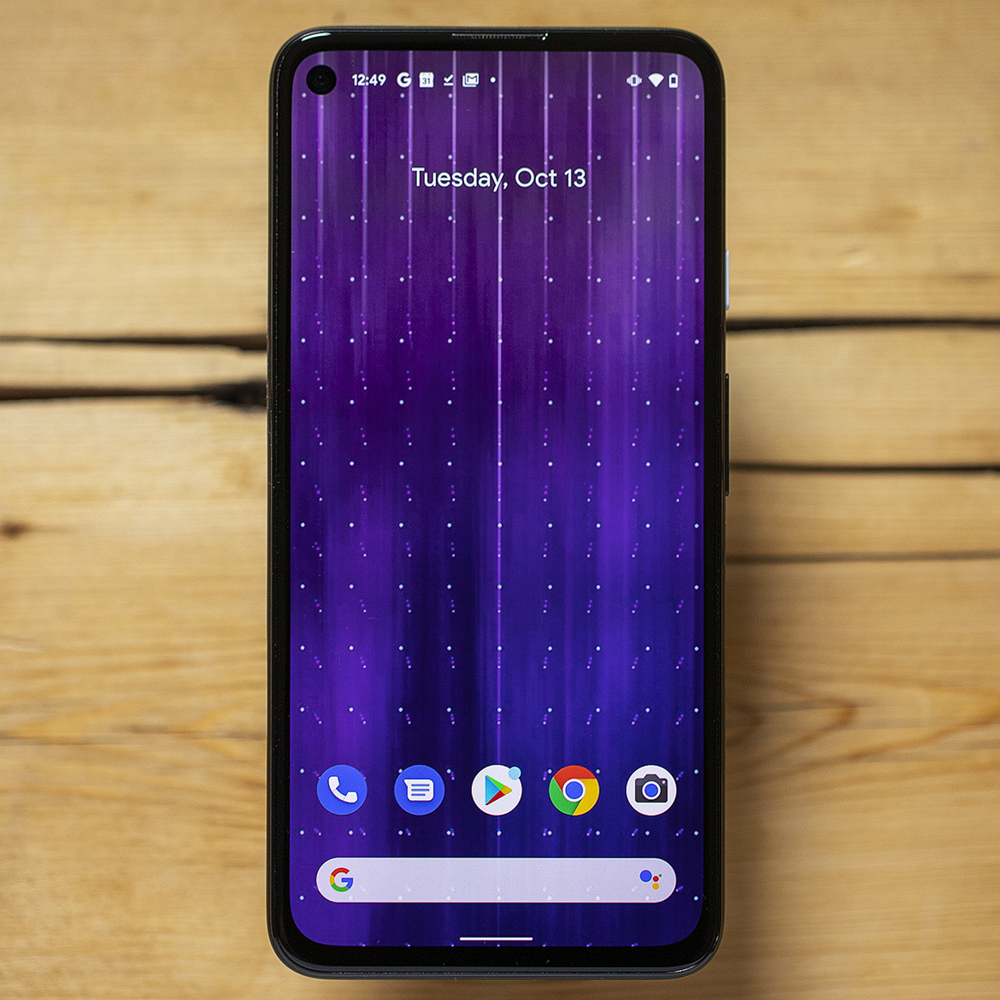 The Pixel 4A 5G is the largest Pixel that Google is releasing this year, with a 6.2-inch screen. It doesn’t feel as surfboard-y as other large phones, in part because it’s relatively light compared to something like a Galaxy Note and because its screen just isn’t as big as others. In fact, Google wasn’t aiming so much at making a big phone with the 4A 5G as it was trying to balance the parts and the 5G radios. The slightly larger size is more side effect than goal.

It also has relatively small bezels around the screen, though they’re bigger than on the Pixel 5 and also a bit uneven due to the OLED screen technology Google used. The screen looks good. It’s only 1080p and doesn’t have a high refresh rate. Colors are accurate, and the screen is viewable in daylight, too, which isn’t always the case with inexpensive OLED screens.

I’ll give this to Google: it has chosen an aesthetic for its Pixel phones and stuck to it. The Pixel 4A 5G looks very much like the 4A and the 3A. It has a basic plastic body that’s smooth to the touch — it’s neither slick nor especially grippy — but the plastic doesn’t feel cheap, just a little plain.

The rear also holds a small square-shaped camera bump with two lenses and a fingerprint sensor. The sensor isn’t very recessed, though, and my finger sometimes has a hard time locating it. When I do find it, the sensor is lightning quick. It’s much faster than even the best in-screen fingerprint sensor, but I’m not totally sure I prefer that trade-off.

Another notable hardware feature: a 3.5mm headphone jack. The exterior trade-offs Google made to bring the price down include no wireless charging, no high refresh rate screen, and no rated IP68 water resistance — the last of which is the biggest bummer to me.

Google made a bunch of other trade-offs on the inside of the Pixel 4A 5G, of course. The main one is the processor, Qualcomm’s Snapdragon 765G. This trade-off cuts both ways: it’s more expensive than the regular 4A’s processor, but it’s also faster and provides support for 5G.

A quick word on 5G: in the US, it’s not great. That’s why I find it odd that Google seems so compelled to create and release this phone. The oddity is easily explained, though: US carriers aren’t eager to sell any phone that doesn’t support 5G anymore. The situation is worse on Verizon, which simultaneously has the worst 5G coverage and higher prices. If you are looking at Verizon, the $599.99 Pixel 4A 5G makes less sense than just spending $699 on the Pixel 5.

5G aside, performance on the 4A 5G is quite good, easily fast enough for day-to-day tasks. Judged side by side against top-tier phones like the Galaxy S20 or even the iPhone 11, the Pixel 4A 5G is noticeably slower at tasks like rendering webpages or loading big apps. But just using it every day, you won’t really notice. Especially at its $499 price point, the 4A 5G is fast enough and should provide good performance for several years. It’s notably faster than the regular Pixel 4A, which has a slower processor and lacks 5G.

The biggest performance question mark going in was battery life. The Pixel 4’s battery life is notoriously bad (the 4 XL is slightly better, if only because it’s bigger and has a bigger battery), so Google doesn’t get the benefit of the doubt. Luckily, the Pixel 4A 5G has very good battery life, thanks to its respectably sized battery and efficient processor. I had no issue lasting through a day, clocking as many as six hours of screen time on it.

Like the Pixel 4A, the 4A 5G and the Pixel 5 lack the Pixel Neural Core processor that was used for faster image processing in the Pixel 4. Although Google says it has done work to speed up image processing, if you take a portrait or Night Sight image and immediately jump to review it, you’ll have to wait a few seconds to see it. This is perhaps the only performance downgrade I’ve observed between the 4A 5G and last year’s flagship Pixel 4, but it’s not a deal-breaker.

Out of the box, the Pixel 4A 5G comes with Android 11. Like all Pixel phones, it will be first in line for future Android updates, and it is guaranteed to get them for at least three years. Google’s take on Android is clean and simple compared to what other Android manufacturers like Samsung and LG do.

Google has also introduced a new battery-saver mode called “extreme battery saver.” The idea is if you need to go two or three days away from a charger, you can turn on this additional option. It turns off all but an approved list of apps you choose. I don’t know why Google couldn’t have made do by improving the standard battery saver mode, and in my time with the phone, I’ve found its battery life in normal mode to be plenty adequate anyway.

The customizations for the Pixel in Android 11 are fairly minor. Mainly, you’re just getting the experience Google intends to be common across all Android phones. Holding down the power button brings up a quick menu for Google Pay and smart home controls, and some chat apps can be put into floating bubbles that sit above your other apps. There’s a feature that turns your dock into a set of suggested apps, but it’s not especially helpful.

One of my favorite software updates is inside Google Photos. On some portrait photos, there is an option to move or change the intensity of a virtual light source to change the lighting on a face. It works much better than I expected.

The Recorder app has a little feature that lets you export short video clips that display the transcription along with the audio. It’s clever, but it’s also heavily branded with a logo for the Recorder app and the Pixel itself, so I don’t see myself ever using it.

Overall, I really like Google’s take on Android. It lacks some bells and whistles but makes up for that by being well-designed.

Despite being lower cost, the Pixel 4A 5G has the exact same camera system and features as the Pixel 5. There’s a main 12-megapixel sensor — the same that Google has been using since the Pixel 3 — and a new ultrawide sensor that replaces the telephoto from the Pixel 4. The selfie camera is 8 megapixels and sits inside a hole punch in the display.

Since the camera systems are the same, I’ll direct you to the Pixel 5 review for more in-depth analyses. Here, I’ll just give you the short version of my observations:

Overall, the Pixel 4A 5G’s camera is my favorite for photos on a smartphone, but a lot of that comes down to preferring the way Google processes images and how well the Pixel handles dark lighting conditions. That preference used to have a wide margin compared to competitors, but the gap has nearly closed, and Google has some work to do if it wants to keep ahead of the pack.

Bottom line for this $499 phone is that you’re getting a camera that’s head and shoulders above the other phones in this price tier.

The Pixel 4A 5G is not an exciting phone. It doesn’t have the eye-poppingly low price of the standard Pixel 4A and it also lacks many of the features on more expensive phones. The list of things it lacks includes water resistance, wireless charging, a high refresh rate screen, and a top-tier processor. Many will look at that list and think none of those things are important. But all of them are nice, and it may be that at least one thing will be a deal-breaker.

If so, Google has the Pixel 5 for $699 with nearly all of those features (and the Verizon version doesn’t cost more). If the processor gives you pause (I don’t think it should), there are plenty of Android phones and of course the iPhone to consider. At $349, the regular Pixel 4A is easy to recommend. At $499, the Pixel 4A 5G requires a bit more comparison shopping.

As with all Pixels, the 4A 5G’s strengths are hard to put on a spec sheet. It’s more unassuming than other Android phones, but its software is also more elegant and easier to use — and of course, the camera is almost surely better than the direct competition. It won’t turn heads, but the Pixel 4A 5G won’t let you down, either.

Agree to Continue: Google Pixel 5 and 4A 5G