Beats’ first earbuds with a USB-C connector are only $50

The new $50 Beats Flex are a very smart play from Apple’s Beats division. One reason why is obvious: with the iPhone 12 lineup no longer shipping with included earbuds, this neckband-style option could prove to be a popular substitute. The Beats Flex earbuds are significantly less expensive than the Beats X they’re replacing — not to mention AirPods. They offer a lengthy 12 hours of battery life, have a comfortable fit, and eliminate the anxiety of losing a truly wireless earbud.

But the other reason why the Flex buds are an important product is, well, Android. Instead of using Apple’s proprietary Lightning connector for charging, as many Beats headphones have since the acquisition, the Flex have a USB-C port. Beats’ Android app has already been updated to support them. These moves show that as Apple continues putting a greater emphasis on audio products — with the new HomePod mini and long-rumored premium headphones expected to launch soon — Beats is realizing it needs to stand independently from Apple’s ecosystem if the brand wants to continue its enormous success.

Our review of Beats Flex 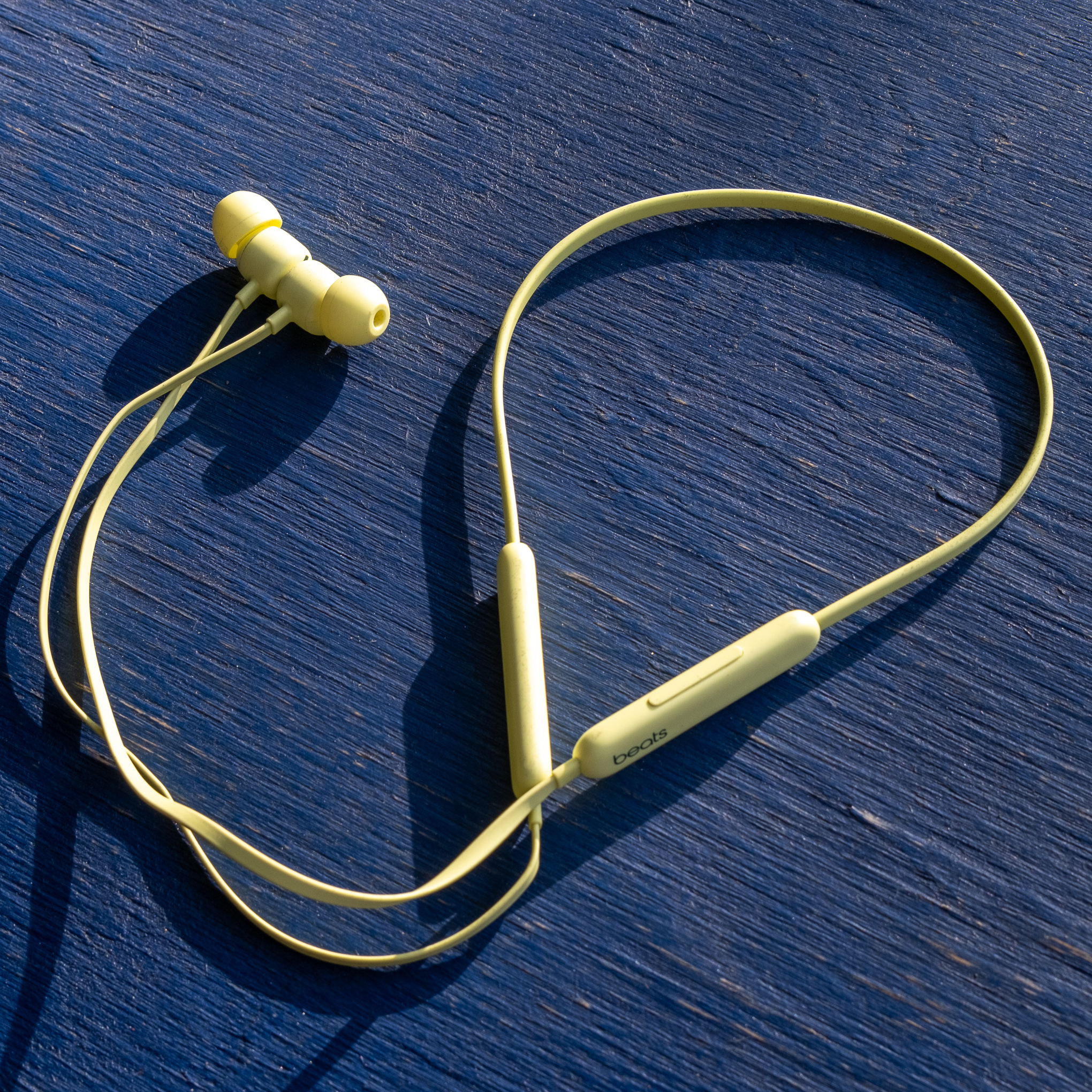 The Beats Flex look very similar to the Beats X, which have now been discontinued. The soft, rubberized “Flex-Form” cable rests around the back of your neck, and the lightweight, evenly-balanced design allows for the buds to comfortably hang down at your chest without the slightest bit of discomfort. On me, the buds fall to around my sternum area. As with the Beats X, you can magnetically attach them together — and this time, your music will automatically pause whenever you do so. Four sizes of ear tips come in the box, and while the Flex fit me well, I did notice that their passive noise isolation leaves something to be desired. Sitting at home listening, they’re fantastic. But out on the street, you can hear a fair level of ambient noise.

Beats has redesigned the inline controls a bit. On the left side, the three-button remote is gone, replaced by a single, round multi-function button for pause/skip/back and a separate volume rocker on the side. There’s a pill-shaped grille covering the integrated microphone, and on this side you’ll also find the USB-C connector. On the right-side module, there’s just a power button. The Flex-Form cable that conforms to your neck feels a little thinner (and lighter) than what was on the Beats X, so I’d be lying if I said I wasn’t slightly concerned about long-term durability. Beats assured me that the Flex earbuds have passed the company’s usual set of reliability tests.

Apple has stuck with its W1 headphone chip inside the Beats Flex, giving them the usual instant setup process and synced pairing across devices tied to your iCloud account. It would’ve been nice to have the newer H1 chip, since that’s required for the automatic switching feature between iPhone, iPad, and Mac that’s included as of iOS 14 and macOS Big Sur. Losing that touch of convenience is the tradeoff you make for the $50 price. Hands-free Siri isn’t present, either.

Battery life for the Beats Flex is estimated at “up to 12 hours” of continuous listening, and that seems on point in my time reviewing them so far. That’s an improvement from the 8 hours of the Beats X. Though curiously, the “Fast Fuel” quick recharge numbers aren’t as good: the Beats X could get 2 hours of juice from a 5-minute charge, but the Flex will get 1 1/2 hours from a 10-minute charge. Maybe Beats is just being more realistic about the estimate this time around, but it’s a difference nonetheless.

Another thing to be aware of is that the Beats Flex aren’t rated for sweat or water resistance. If you need that reassurance, you’ve got to pay more money for the Powerbeats — also a neckband-style design — or the completely wireless Powerbeats Pro. Beats doesn't include any kind of pouch with its $50 earbuds, so you’ll just have to carry them loose.

The Beats Flex can be used without agreeing to anything in software, though you’re subject to Apple’s privacy policy.

If you install the optional Android app, you’ll be asked if you want to opt into providing daily analytics data, which Apple says “may include location information.” It also includes device software versions, device rename occurrences, and device update success and fail rates. Apple says none of this data could be used to personally identify you.

The Android app will also request location permission to pair using Bluetooth Low Energy and “connect to your Beats instantly, check battery status on the fly, and access deeper functionality.”

It should come as no surprise considering the price gulf, but both of those will sound noticeably better than the Beats Flex, as well. Don’t get me wrong: the Beats Flex have a very pleasant sound signature that, importantly, never really got fatiguing. As you’d expect, they also pack ample bass (with a hint of treble boost to go along with it).

Beats claims the Flex buds contain “a proprietary layered driver with dual-chamber acoustics to achieve rich, balanced sound with outstanding stereo separation.” Marketing lingo aside, they sound good for $50 wireless earbuds, but lack the same level of depth and fidelity as the pricier models. They’ve been tuned as earbuds you can wear around your neck throughout the day and pop in your ears as needed, and they’re perfectly good for casual listening.

When walking down the street, I didn’t notice any cable noise or pulling from the neckband. And the Beats Flex have fared decently enough on my Zoom and phone calls in the few days I’ve been wearing them, with others hearing me loud and clear. Bluetooth signal has also been steady; dropouts tend to be less of a problem for neckband earbuds.

The Beats Flex will automatically pause your music when you link the earbuds together with their built-in magnets, and they’ll resume playback when you pull them apart; there aren’t any sensors that detect when they’re actually in your ears. This works on the Android side as well, though on Android, I’ve noticed it’s possible to hit in your music app and audio will continue playing through the earbuds when they’re hanging on your chest. An iPhone will automatically switch to speaker audio when the earbuds get linked together. I wish there was an option to power the earbuds down when magnetically attached, like the OnePlus Bullets Wireless 2, but pause is all you’ve got.

But if that’s my biggest gripe with the $50 Beats Flex, I think they’re a pretty clear success. There are all sorts of true wireless earbuds on the market now — including more budget-focused options at this same price range. But some people just prefer the neckband (or neckbud) style and don’t want to fuss with carrying cases or deal with the panic of an AirPod rolling toward a subway grate.

The Beats Flex are a well thought-out product with easy controls, enough battery life to last your entire workday, and solid audio quality for the price. And the transition to USB-C is significant. In a year where it made all the sense in the world to stick with Lightning to appeal to iPhone 12 buyers, Beats is extending a branch beyond the Apple ecosystem as AirPods and AirPods Pro continue to saturate that market.