I mentioned in a recent review of the HyperX Cloud II Wireless that my ideal low-cost headset has to be comfortable, have great sound quality, and support for USB-C charging. Apparently, I need to raise the bar a little, as more headsets other than the HyperX can satisfy those requirements. The latest to do that is Corsair’s HS75 XB Wireless, a $150 gaming headset made to work on the Xbox Series X / S and Xbox One without the need for a USB dongle. It also works on PCs via Microsoft’s wireless Xbox USB adapter, which is how I tested this model.

The HS75 XB Wireless has open-back ear cups with 50mm drivers that push out a lovely, warm sound, with bass and highs coming through without stepping on each other. Compared to closed-back designs, this open-back design results in a fuller, more lifelike sound that doesn’t seem as compressed. Trying out songs like “Jewelry” by Blood Orange shows off the range nicely, providing twinkles of instrumentation to test its highs and a big beat coming through in the second half of the song to test out the bass. 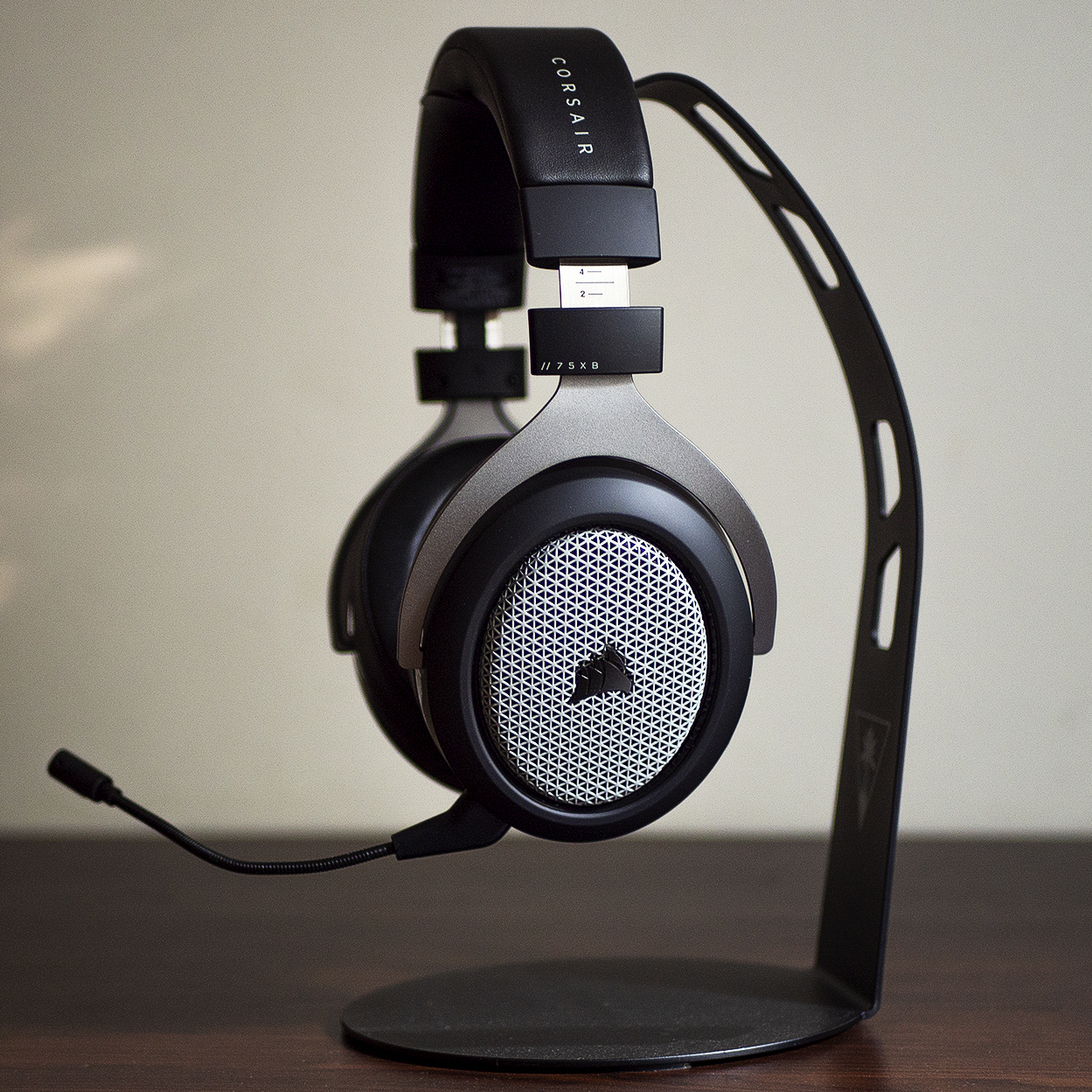 Of course, this headset is made primarily for gaming, and its audio chops are put to good use there, too. I tested it for a few hours with Hades, my latest addiction. All of the action came through just as intensely as I wanted, making each run all the more gripping. The sound quality was great, and the free Dolby Atmos app helps to fill it out with virtual surround sound.

In Hades, positional audio isn’t necessary to do better or get more enjoyment. But where positional audio comes into play is with a VR game like Half-Life: Alyx, which I’ve been spending more time with since the Oculus Quest 2 released. Using the HS75 XB Wireless with Atmos enabled, the experience is more engrossing (and downright terrifying since I last left off in a headcrab-infested area). It actually got a little too intense at some point — so I’d consider that a success for this headset.

Sound aside, the HS75 XB Wireless looks and sounds more like a high-end set of headphones than gaming headsets I’m accustomed to testing. This wireless headset has solid build quality and doesn’t feel too heavy or tight on my head. The size adjusters on each side of the headband click rigidly into place, and it supports head sizes far larger than my own rather large head. A metal grille covers each of the cups, surrounded at the edges with grippy plastic. Unfortunately, the ear cups on this model don’t swivel to lay flat. I always like that for portability, though it’s rare to find in a gaming headset.

Corsair covers the inside of each ear cup in a leather-like material, and they don’t feel too toasty because of the open-back design that lets some air in. However, this will be more of a con than a pro for some gamers, as that design also lets a good amount of sound in and out. It seems a little contradictory that Corsair’s focus on positional audio comes in a headset that can’t effectively keep out the noise. On the other hand, as long as you don’t need pin-drop silence, it shouldn’t be much of a bother.

Using the HS75 XB Wireless’ controls is simpler than with most headsets. Corsair opted for a symmetrical layout for each ear cup. Visually, both sides mirror each other, but on the left, a dial controls the volume, with a button beneath it to mute or unmute the adjustable (and removable) microphone. On the right, Corsair put in a chat and game audio mix dial, residing above a power button. This isn’t the first headset to feature an intuitive way to adjust the chat / game audio mix, but it’s always appreciated.

As I touched on earlier, this model supports USB-C charging, improving over the Micro USB port used with Corsair’s HS70 headset. More and more headsets are making the jump to USB-C, and while it might seem like a small shift, it’s easier to plug in than Micro USB and usually results in faster recharge times. Corsair claims 20 hours of battery life per charge, and I haven’t yet been able to drain it fully. This isn’t best-in-class longevity, but it should last for a few sessions without needing to be topped up.

There isn’t an overwhelming number of wireless gaming headsets that work with Xbox consoles. But compared to some of the newer options, like the $150 SteelSeries Arctis 7X and the $120 Astro A20 Gen 2, the HS75 XB Wireless is a better option when it comes to sound quality, ease of use, and comfort. Not that any of those models are bad, but if you’re particular about attention to fine detail, Corsair’s $150 headset stands out just a bit beyond what’s currently out there.