Complete with software features that make it easy to join parties, record, and share video clips

Share All sharing options for: The Backbone One is a stunning controller that turns your iPhone into a more capable gaming device

As the high-profile disputes about what content you can play on your iPhone rage on between Apple, Epic Games, Google, and Microsoft, a company called Backbone is focusing instead on making sure you get the most out of the games that are currently available. Like Razer did with its Kishi controller for iOS, and as other companies have with snap-on controllers of their own, Backbone is introducing one for $100 that it calls the Backbone One. You can buy it from Backbone’s site.

With the controller fully extended, it can fit any iPhone running iOS 13 or later, starting with the iPhone 6S and including the new iPhone 12 lineup. It’s great for Apple Arcade games that support controllers. Sky: Children of the Light and Call of Duty: Mobile play wonderfully with the One. And, for popular games like COD: Mobile that don’t have controller support switched on from the start, Backbone curates visual tutorials that appear before it launches to walk you through the steps to turn it on in the game’s settings.

Since the Backbone One launched, it now works with Genshin Impact, the xCloud iOS beta for Xbox Game Pass Ultimate subscribers, and Google Stadia, too. Even playing games like Hades through the Steam Link app (with my PC connected via Wi-Fi) felt surprisingly natural.

Unlike most controller accessories made thus far, the Backbone One is a hybrid of tightly integrated hardware and software. If we’re looking at the hardware, it’s arguably the best of its kind yet. Both sides of this controller have rounded edges that fit naturally in my hand. I praised the design of the Razer Kishi, but this has a more subtle look that doesn’t cover up as much of your phone’s edges. Each button has a more responsive, tactile click, and the analog sticks feel roughly the same size as Nintendo’s Joy-Con for the Switch. Speaking of the Joy-Con, the One’s rear triggers actually feel better.

Our review of BackBone One 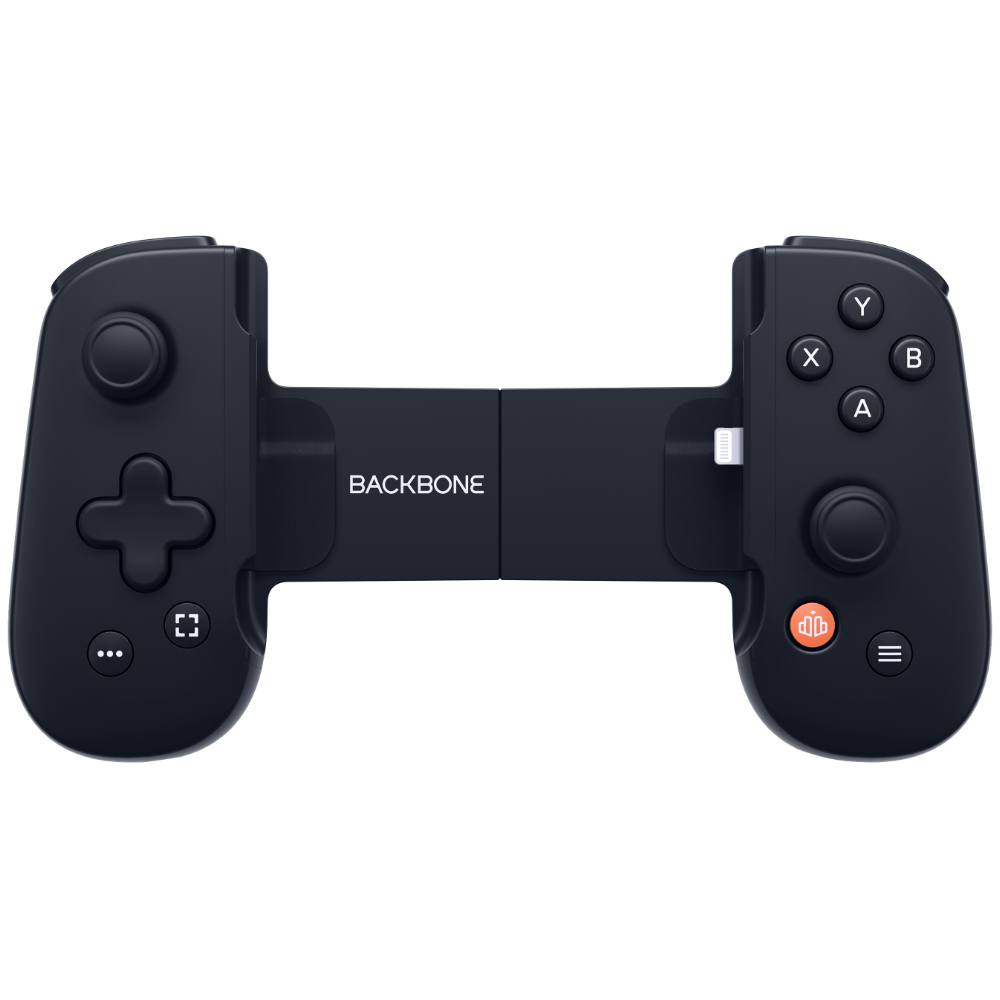 The Backbone One features passthrough Lightning charging, with support for Lightning headphones if you have a set. It also has a 3.5mm headphone jack, giving you another way to listen to audio — even if your iPhone doesn’t have the port itself. As for power consumption, Backbone says the One itself demands less power from your iPhone than many wired Lightning earbuds do. I didn’t notice more battery usage during gameplay with the controller attached than I normally would without it.

The hardware alone might make it worth the purchase, but the software is what really makes it unique. The One doesn’t require its companion app to work with any iOS game that supports a controller, but using the app turns your iPhone into a game console of sorts.

Pushing the controller’s orange Backbone button while the One is connected to your phone will open up the Backbone app, which looks like an operating system. There, you’ll find all of your installed games cleanly laid out in an almost tvOS-esque interface. The app also shows new games available for download in the App Store that support controllers. To add games to the Backbone interface, just tap the orange button when you first boot up each new game. This app takes advantage of the iPhone’s excellent haptics to buzz when you flip around the menu, and the company made its own satisfyingly subtle vibration effect that you’ll feel while quickly flying through a bunch of tiles in the interface with the L1 and R1 shoulder buttons.

Scroll down a little more in the app, and you’ll find photo and video clips you’ve saved and those from friends. This controller has a dedicated button to let you snap a screenshot in-game, or even record a video clip, which are features that should be familiar to anyone who’s used a modern gaming console. Notably here, though, is that you can press and hold that button for a moment to bookmark key moments on the fly. The Backbone button illuminates a red LED while you’re recording, so it’s easy to see at a glance when you’re live. Backbone handles recording and accessing clips much more elegantly than the Xbox One, PS4, PC, or Switch.

After a video clip is saved, you can then trim and share the clip in the Backbone app, as well as via iMessage or any social media apps you use. One special thing to note is that Backbone says it can record 1080p clips at 30 frames per second in the HEVC / H.265 codec (supported on the iPhone 7 and newer), so you’ll have higher-quality video without sacrificing as much storage space as other codecs require.

Yet another software feature you’ll get with the controller is the ability to create parties and voice chat with friends in the app. These parties operate independently of the game you’re each playing (you don’t even need to be playing a game), so it’s a good way to connect even if you aren’t all into Call of Duty: Mobile, for example. If you’re into recording clips with your friends, the video recording feature will pick up your voice in the mix, along with everyone else’s in the party (indicated by the small orange light near the iPhone’s top bezel in iOS 14). Each participant can choose to mute their mic by double-pressing the left-most button that has three horizontal dots.

Snapshots, video recording, and organizing parties for voice chat are just a few ways in which Backbone takes the reins in iOS to create a more interesting experience than Apple itself offers to gamers. It also offers rich presence notifications, chiming in with a notification — whether you’re in the Backbone app or not — to tell you when a friend has logged on, or with an invite that you can click to join a party.

On its face, the Backbone One is just a controller — and a very good one, at that. But with software enhancements that take advantage of iOS in some clever ways, Backbone makes the iPhone feel like a bona fide gaming platform that I want to remain a part of. When the hardware and software are all working together, with the ability to easily join up with friends and record clips, the One feels like a gaming experience that somehow beats Apple to the punch of fleshing out its own gaming ambitions. It is no longer just like a phone strapped into a few pieces of plastic but the start of something very special. And for $100, without monthly charges to use its software and party tools, it’s an appealing price if you do a lot of mobile gaming.

As well as it works on iOS, the Backbone One seems perhaps better suited to launch on Android, given that Fortnite isn’t available on Apple’s App Store. Though, since the One launched, Google Stadia and Microsoft’s xCloud game streaming services have come to iOS, giving you more content to play than before. Backbone wouldn’t comment when I asked about an Android-specific version of the One. But this iOS controller is already worth the cost of admission if you’re an Apple Arcade subscriber or just enjoy a few one-off games.

Update April 27th, 10:30AM ET: Backbone confirmed that Genshin Impact is supported by the One. Also, I’ve updated this review to note that Google Stadia and xCloud are both accessible on iOS.