The most affordable 5G phone lags behind the Pixel 4A 5G’s camera, display, and software

Share All sharing options for: TCL’s new phone has ultra-fast 5G for $399, but that’s not enough

The TCL 10 5G UW is the latest 5G phone exclusive to Verizon’s network today, and it’s the most affordable 5G-ready phone yet — for the moment, at least. It costs $399 outright or $16.67 per month for 24 months on a device payment plan. For those paying attention, Samsung’s Galaxy A71 5G UW held this distinction in July with a $649 price tag, so the prices are definitely falling quickly. TCL originally announced this phone at CES 2020, but today’s announcement adds the carrier and price.

Impressively, TCL’s phone is priced at $200 less than the Verizon-specific version of the Google Pixel 4A 5G while matching it spec for spec in terms of hardware, including the Snapdragon 765G processor, 6GB of RAM, and 128GB of storage.

$399 is a price that TCL sees as an easier hurdle for people who want to experience 5G without spending upwards of $1,000 on a flagship phone, like the Samsung Galaxy S20 or the less expensive but still costly iPhone 12. And it’s noteworthy for this price that TCL’s new phone supports Verizon’s newly launched sub-6GHz 5G spectrum to provide faster-than-LTE speeds across much of the US as well as millimeter-wave (mmWave) ultrawideband that isn’t as widely available but considerably faster if you’re able to experience it. 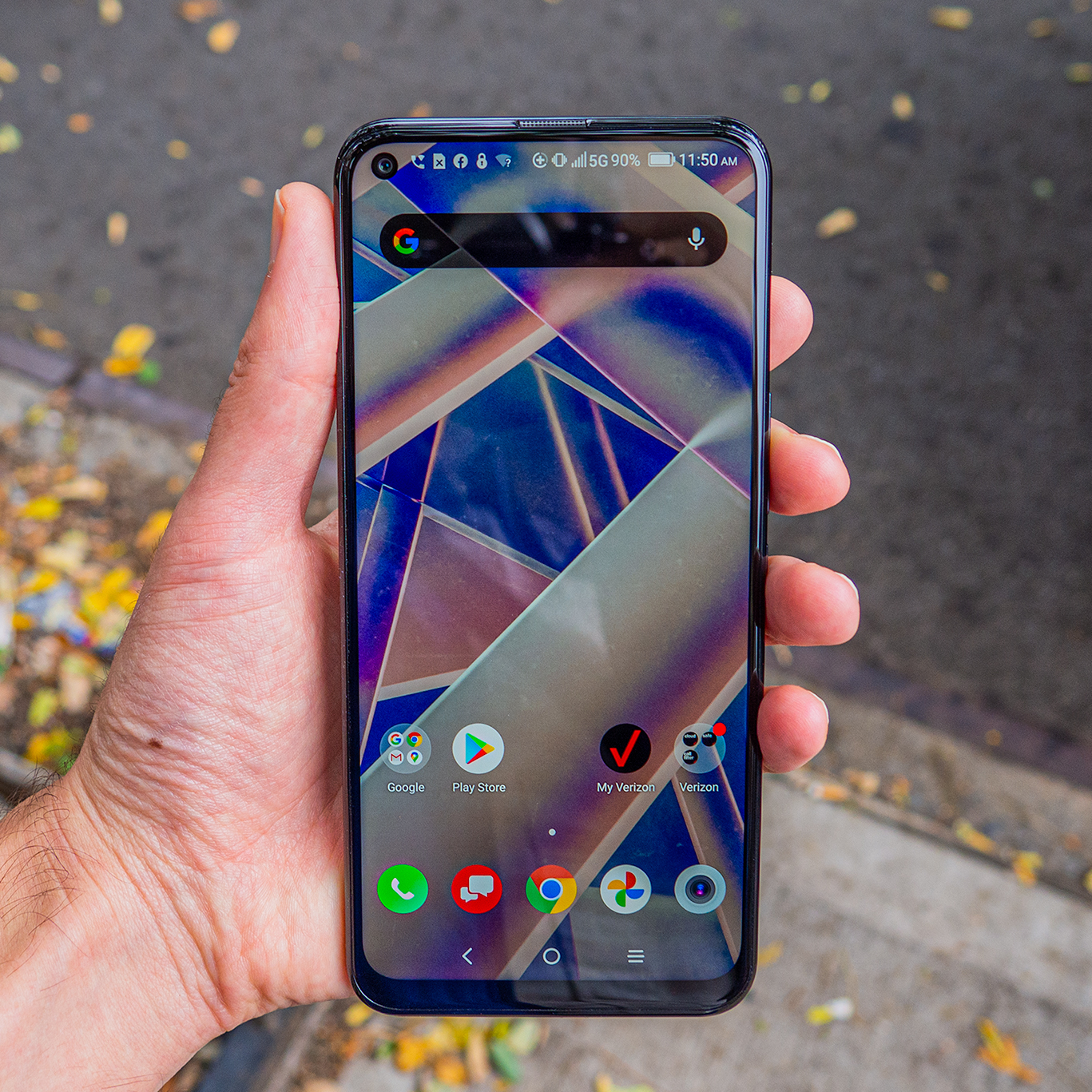 5G works as expected with the TCL 10 5G UW. In my Brooklyn neighborhood, I have one mmWave spot within a short walking distance and several more within a mile from where I reside. If you haven’t experienced mmWave before, it can be incredibly fast, perhaps faster than your home internet. I saw TCL’s phone peak at about 500Mbps downloads. Depending on where you live, you might reach gigabit speeds. Verizon’s sub-6GHz spectrum 5G network that recently rolled out is accessible from right outside my apartment, where I can get around 100Mbps download speeds, which is significantly faster than I usually experience in my area.

It’s great that fast internet speeds are possible on a phone at this price, and the rest of the 10 5G’s specs are no slouch. The Snapdragon 765G’s capabilities here fall in line with what we saw in the Pixel 4A 5G and the LG Velvet — even besting their respective battery capacities with a 4,500mAh battery that has no issue at all lasting through the day, plus some. The short version is that the Snapdragon 765G doesn’t hold a candle to the flagship Snapdragon 865, but it’s totally suitable for running most applications and some games smoothly. TCL gets kudos for matching the specs from Google and LG for far less, but the 10 5G UW isn’t without compromises.

It has a 6.5-inch LCD screen that is sharp and contrast-rich in most situations, and it even has tech that allows it to upscale SDR content to HDR10 content. But it’s best viewed straight-on and otherwise has lousy viewing angles. Also, dark scenes in movies, TV shows, and games have a gray, washed-out look to them. Both Samsung’s and Google’s more expensive phones mentioned above feature OLED screens, which provide unmatched picture quality for any kind of content.

TCL’s 10 5G UW also lags behind with software, launching with Android 10 with the promise of Android 11 launching “in the coming months.” Software versions aside, the feel of TCL’s spin on Android required an adjustment period for someone like me who usually uses a Pixel. It has a three-button software navigation on by default, with the option to turn on full gesture navigation if you’d rather claim the entire screen with no software buttons. It lacks the option to switch to Google’s pill-shaped home button on Pixel phones that can be swiped to quickly switch apps. Samsung users might feel right at home, as this interface lets you swap the placement of the back button and multitasking buttons.

Given that this is a carrier-exclusive phone, you might have seen this coming: Verizon absolutely stuffed it with bloatware. You’ll get Verizon’s Cloud, Digital Secure, and Call Filter apps installed on the home screen; Verizon’s Messages+ set as the default SMS texting app; along with the following apps preinstalled (but thankfully, removable):

In case you were wondering, this isn’t TCL’s most capable or feature-packed phone. My colleague Jon Porter reviewed the TCL 10 Pro earlier this year, a $449 phone that prioritizes design over the connectivity and speed of this Verizon-exclusive model. The 10 Pro has a 6.47-inch OLED screen with curved edges, an in-display fingerprint sensor, and very small bezels. By comparison, the 10 5G UW has a bigger bottom bezel and a square-shaped rear fingerprint sensor. Speaking of, that sensor can launch different apps depending on which finger you use to unlock your phone. That’s clever.

In terms of cameras, the TCL 10 5G UW’s three-camera array doesn’t quite stack up against the 10 Pro’s four-lens stack, but it still provides respectable images in favorable lighting conditions. The cheaper phone includes a 48-megapixel main sensor (versus 64-megapixel) with f/1.8 aperture, a 5-megapixel macro lens, and an 8-megapixel wide-angle lens. It’s missing the dedicated low-light video camera from the Pro, though it brings along the dual flash LEDs. I took a few good-looking shots with the 10 5G UW in my apartment, though most of my other shots weren’t inspiring enough that I’d feel the urge to share them.

These differences and flaws aside with TCL’s higher-end phone, this $399 device is an aggressive play, both for TCL against the likes of Google and Samsung and for Verizon against other carriers vying to get you to invest in their vision for 5G. I’d usually never recommend that someone buy a phone simply for 5G, but if Verizon’s 5G service is plentiful in your area or you’re willing to meet it halfway, this device is affordable enough that it isn’t so wild to imagine buying primarily for that reason.

Low-cost phones like this one show that Verizon wants 5G devices to scale (something the iPhone 12 will likely do for it anyway), but it now needs to solve for adding scale to its 5G network. My experience with it hasn’t been what I’d call exemplary so far — in the US’s biggest city, no less. Even today, when 5G is “real” now that the iPhone 12 has released, I have to physically move toward one of its impressive mmWave emitters, and I don’t see that changing anytime soon.

Correction: Updated to reflect that the TCL 10 5G UW does have an IP52 water and dust-resistance rating. The company previously stated that it didn’t have any ingress protection rating.