Share All sharing options for: Fairphone 3 Plus review: sustainability comes with compromises

It’s hard not to be charmed by a smartphone that comes with a screwdriver in the box, especially when it’s as small and dinky as the one that comes with the Fairphone 3 Plus. In fact, that’s the only accessory you get with the phone. There’s no USB cable, no wall charger, and definitely no earbuds in the box.

This little screwdriver is an important indication of what you’re getting with the latest device from sustainable smartphone manufacturer Fairphone. For starters, the phone is designed to be as repairable as possible. It’s an upgraded version of last year’s Fairphone 3, one of only two devices to have earned a perfect repairability score from iFixit. Beyond repairs, Fairphone also attempts to use ethically sourced materials where possible and offer good working conditions for the people making its phones.

These are all noble aims, and it’s hard not to want Fairphone to succeed. But wanting a smartphone manufacturer to succeed means holding its devices to a high standard because that’s how it can attract the biggest audience and create the biggest positive impact.

Our review of Fairphone 3 Plus 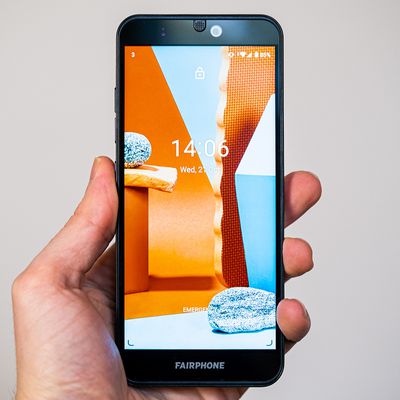 Before we get into talking about the phone itself, it’s worth taking a moment to talk about how it’s made. For starters, 40 percent of the plastic used in its construction is recycled, as is some copper. It uses gold from Fairtrade certified mines, tin from conflict-free mines, and Fairphone also has initiatives to improve conditions for factory workers in China. It’s a lot of stuff you probably don’t think about with other phones, but Fairphone is making an effort to be ethical across its supply chain.

It’s incredibly easy to open up the Fairphone 3 Plus

When it comes to the final product, however, the Fairphone 3 Plus’ design is basic. This isn’t a phone that’s designed to hide its technology inside of a sleek slab of glass or metal. Repairability dictates a design that’s slightly bulkier, as Fairphone makes space for all of the user-accessible screws and plastic clasps this requires. The phone also isn’t dust or water resistant because this would require using seals or glue that would get in the way of repairs.

You’re exposed to these repairability features just by setting up the phone. There’s no SIM tray accessible from the outside of the phone, so instead, you have to pull off its plastic back, take out the removable battery, and then slide your SIM card into an internal slot. Personally, this was a nostalgic process that reminded me of what it was like to use feature phones in the ‘90s, but for others, it might come across as a bit dated.

Once you’ve got the back off of the phone, you can see all of the design features that contributed to that perfect repairability score. There’s no awkward glue or proprietary screws holding the phone together, just a series of plastic clasps and standard Phillips head screws.

It’s charming in its simplicity, but it also makes for an old-fashioned-looking device. Compared to most modern smartphones the Fairphone 3 Plus is a bulky slab of plastic. It’s got big fat bezels above and below the screen and an oddly prominent earpiece and selfie camera. If you like technology that looks like technology, then you’ll appreciate it, but it’s far from sleek.

Functionally, this design can also be a bit awkward. I found the Fairphone 3 Plus has an annoying design quirk where the location of the rear fingerprint sensor is just too high up the back of the phone, forcing me to readjust my grip to unlock the phone. As a right-handed person, it also felt a little weird having both the volume and power buttons on its left side. Then again, my left-handed roommate loved it. Make of that what you will.

Design gripes aside, the rest of the Fairphone 3 Plus’ appearance is unexceptional. It has a 1080p LCD display that doesn’t get very bright with colors that look a little washed out. Its single speaker is average, and unlike a lot of other phones, it’s placed on the left side of the device rather than the bottom. The location meant I accidentally covered it slightly less while holding the phone landscape to watch videos but more when I held it in portrait. Regardless, you’re going to want to use headphones here, so thankfully, there’s a 3.5mm headphone jack to make that easier for you.

The Fairphone 3 Plus isn’t a very fast phone

Performance-wise, the Fairphone 3 Plus chugs. It’s powered by a Snapdragon 632 with 4GB of RAM, which translates into a two-year-old chip with an amount of RAM that only budget Android handsets try to get away with these days. Stutters are a fact of life with the Fairphone 3 Plus, whether you’re activating Google Assistant to perform a quick task, flicking between apps, or opening the app drawer.

I also encountered a couple of annoying bugs during my time with the phone. Most annoying was that I couldn’t find a way to import my WhatsApp contacts or chat backup. Every time I tried to do so, the app got stuck in a loading loop, which didn’t end after even leaving it to run for half an hour. I’m running WhatsApp’s Android beta software, but even so, I’ve never experienced this on other devices. After switching Android to gesture navigation, I also found that UI elements on the home screen would overlap with one another. It makes the phone feel a little cheap.

The battery life of the Fairphone 3 Plus is nothing exceptional. Most days, I’d end the day with around 40 percent of charge, but that’s me working from home, so I’m not doing anything battery-intensive like navigation. Screen-on time varied massively between a low of three and a high of five and a half hours. In normal use, I think this is a phone that’ll just about last you a day, but not much more.

At least part of this dated hardware can be blamed on the fact that the Fairphone 3 Plus is fundamentally the same phone as last year’s Fairphone 3. That’s by design since it means that any Fairphone 3 owners who want to benefit from the Fairphone 3 Plus’ upgraded cameras can buy these separately as upgrade modules for their existing handset rather than buying a whole new phone. It’s an interesting response to the criticism companies like Apple face for bringing out new phones every year, which critics say encourages unnecessary yearly upgrades. It’s an admirable design feature, but it creates unfortunate compromises for the final device.

Fairphone 3 owners can get the new cameras as upgrade modules

These specific camera upgrades in the Fairphone 3 Plus are focused on its new higher-resolution sensors. The rear camera has increased from 12 to 48 megapixels, while the selfie camera is now 16 megapixels up from 8 megapixels last year. You still only get one rear camera, but considering how low-resolution and unnecessary a lot of secondary cameras are, that’s probably an acceptable trade-off.

Despite the resolution improvements, however, the overall quality of the photographs taken by the Fairphone 3 Plus only ends up being okay. It might not be priced like a flagship, but it’s still £75 more expensive than the Pixel 4A, a midrange phone that offers very similar performance to its more expensive siblings.

In daylight, the Fairphone 3 Plus tends toward producing detailed images with lots of contrast. They have punch, but this can sometimes come at the expense of shadow detail, and images can sometimes look overly sharp. The combination can create some noisy photographs.

This is especially apparent in low-light situations, where detail can end up being crushed out of darker areas of an image. This means that when things get really dark, you can lose detail entirely.

I generally liked the photos I got out of the Fairphone 3 Plus’ selfie camera, however.

Despite the camera improvements, the Fairphone 3 Plus still offers an average smartphone camera. It’s fine in daylight, but you don’t get much flexibility, and in low-light images can end up looking grainy and lacking in detail.

It feels wrong to criticize the Fairphone 3 Plus by the same metrics we use to rank other smartphones because it makes such an effort in areas that a lot of other manufacturers aren’t interested in. It really is remarkable just how easy it is to take this phone apart, and Fairphone’s efforts to source its materials ethically should be applauded.

A budget phone with a midrange price

But all of these efforts, no matter how worthwhile, come at a cost. In terms of the device that sits in your hands at the end of the day, you’re paying more for less functionality. Performance can be buggy and slow, and battery life and camera performance are average. It’s a phone with charm, but it’s far from stylish, sleek, or any of the other compliments we throw around about phones from other manufacturers.

If you are someone who wants a more ethical and sustainable alternative to a budget £200 device, then the Fairphone 3 Plus delivers. It’ll serve your needs in the same way as a budget smartphone will in 2020 but at a price premium that reflects its ethically sourced materials and repairability. But don’t expect this to compete with other similarly priced phones. Fairphone has different priorities, and in order to buy one of its phones, you need to share them.

Agree to Continue: Fairphone 3 Plus

To use the Fairphone 3 Plus, you must agree to: