This 2020 Razr is fine. But at $1,399, it’s also still incredibly expensive when compared to any other non-folding phone with similar capabilities. Whether that price is anywhere near worth it depends on how much you are willing to give up to have a cool, nostalgia-inducing flip phone with a folding screen.

The new Razr is a cool phone, there’s no doubt. And now that it’s passed a minimum bar of usability and quality, I’ve mostly enjoyed using it. But I wouldn’t enjoy paying for it. 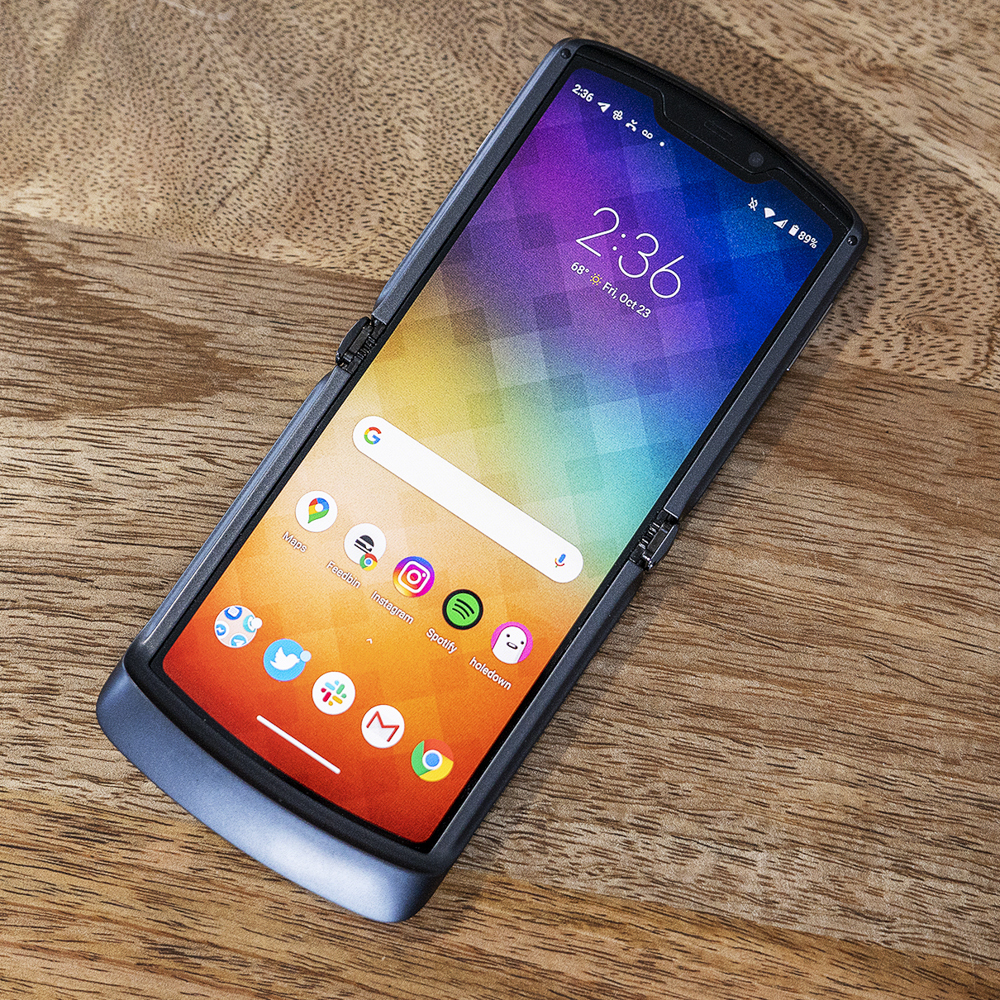 Motorola has done a great job maintaining the classic look and feel of the Razr with this iteration, right on down to the curved edges and jutting chin at the bottom. When closed, it is an elegant, pretty thing. Opened up, it feels thinner than it actually is — it’s about the same thickness as your standard-issue iPhone, but the overall design has that Razr ethos.

The plastic screen feels better, too, thanks to some subtle changes to the hinge system that makes it all just seem a little sturdier. There are still some weird bumps in the middle, but no folding phone has figured out a way to avoid that yet. It’s not the prettiest screen — at 876 x 2142 pixels it has a super tall aspect ratio, and overall its color and clarity looks middling.

Motorola has also added a little more springiness to the flip. It’s possible to flip it open with one hand, but it takes some practice. Once you figure out how to do it, it’s fun. The Razr can’t hold itself up at an angle like the Samsung Z Flip can, but the Z flip isn’t quite as satisfying as a physical thing.

I don’t want to gloss over that having a phone that folds down into a slim, pocketable shape is still incredible. I can go out with the thing in my back pocket and not worry about it sticking or even falling out when I sit (though sitting directly on it probably isn’t recommended). It just plain fits in pockets and bags where bigger, taller phones are awkward.

So, nostalgia box checked. But that wasn’t the problem with the original Razr reboot. That 2019 phone literally creaked and made grinding sounds when you opened it. This one is silent and smooth except for the faint hiss of the plastic screen sliding into place as you close it. And unlike Samsung’s Galaxy Z Flip, it closes completely with no gap since the screen can form a teardrop inside the hinge itself.

The Razr comes in three colors: gold, graphite, and silver. The rear of the phone is flat glass with curved edges, which feels nice but is slippery as all get-out and weirdly doesn’t have a wireless charging coil underneath it. The best you can do there is a 15W USB-C fast charge.

Surprisingly, my major complaint with the hardware has nothing to do with the hinge or the screen, it’s with the fingerprint sensor’s placement. It’s on the back now, hidden within the Motorola logo. It turns out that is an awkward spot, smack in the middle of the phone when it’s open. It doesn’t require contortions to reach it, but it does make unlocking feel like a whole extra step.

The leg up the Razr has over the other flip phone on the market, Samsung’s Z Flip, is that big display on the outside of the phone. Motorola calls it a “quick view” display and it has a few features that are genuinely useful — but sometimes it’s a little buggy.

It has two states. Most of the time, it’s in a locked-down mode where you can long press icons to bring up previews and then swipe up to see even more previews. But the real move is to unlock the phone when it’s closed. Then you will have access to the full Android interface for notifications (including replies), a camera viewfinder, and even an app launcher.

There’s not a ton of room for a big battery inside the Razr, but with some care you can last through a day

You can put certain apps on an approved list for the quick view display, letting you run them on its 2.7-inch 800 x 600 screen. Most Android apps are straight up terrible at that size, but it is convenient to reply to a message with it — the keyboard works well with swipes.

The best part of the outer display is that you can use it as a camera viewfinder, letting you take selfies with the better of the two cameras on the Razr.

The new Razr has 5G, though it doesn’t support the higher-speed mmWave version of 5G (no big loss there). It’s also available unlocked and will take a standard SIM card — two things you couldn’t actually get with the original, believe it or not.

Motorola is using the processor you’ll find on most midrange Android phones (like the Pixel 5 and 4A 5G), Qualcomm’s Snapdragon 765G. It’s paired with 8GB of RAM and 256GB of storage. The upshot of all that is the Razr ran fine in my testing, but I wasn’t throwing a ton of massively complicated games at it.

The processor may also help the diminutive 2,800mAh battery last longer. I definitely needed a charger with this phone by early evening, but with lighter use (including spending more time on the outer display instead of opening the phone up), I could see getting through a day.

There are two cameras on the Motorola Razr. The selfie camera on the inside, next to the screen, has a 20-megapixel sensor crammed into a tiny little space. You should use it for videoconferencing and nothing else, as it’s not great.

Luckily, you can take selfies with the main outer camera easily. It has a 48-megapixel sensor that puts out 12-megapixel images. You can use one of Motorola’s custom gestures (a twist of your wrist, in this case) to launch it and then snap photos of yourself all day long.

When you do, though, try to make sure you’re in decent lighting. Anything too challenging and this otherwise thoroughly average camera goes a little sideways. The same advice applies when you’ve opened the phone up to use the camera like normal, too.

I just can’t really predict what the Razr will choose to do. In twilight, it would jump to night mode even when it’s not at all necessary. It takes time to get familiar with any new camera, but this one will take a little more getting used to than most to learn its quirks.

As with most phones, you can get really nice photos out of the 2020 Motorola Razr in the right conditions. Most times, colors are a little muted and there’s not much sharpness in the details, then out of nowhere it’ll blow out a flower for no particular reason. Every now and then it’ll seriously impress me, as with the sunset shot in the gallery above. Mostly, though, it’s merely okay, including for selfies and especially in low light. Overall, the thing is mostly competent enough for Instagram.

Add all of that up and you have a camera that is a significant improvement over the camera on the 2019 Razr and a significant disappointment compared to the camera on pretty much any Android phone that costs $600 or more (to say nothing of the $349 Pixel 4A).

I feel like a broken record when it comes to reviewing folding phones, but here goes anyway. At some point, I have to believe that the cost of these flexible screens and carefully engineered hinges will come down. If they did, a device like the 2020 Razr would be a perfectly acceptable midrange phone.

Judged just as a phone, there’s nothing standout on the Razr. The camera could be better, but otherwise it has decent battery life, performance, and even build quality. Judged as a flip phone, the Razr occupies its own well-designed niche next to the main competition, the more ho-hum but better in many ways, Galaxy Z Flip.

I think that $1,400 should get you a phone that is amazing in nearly every possible regard, not just a cool design and a satisfying flip. At half the price, I’d be ten times more excited about it. At this price, the 2020 Razr cuts too sharply into any reasonable budget.

To use the Motorola Razr, you must agree to:

Other features like Google Pay may require additional agreements.