The LG Wing is a smartphone unlike any other, with a wild rotating design that makes it stand out when compared to even the weirdest 2020 phones. It’s also the first phone in LG’s new Explorer Project brand, which looks to experiment with new ways to think about how we design and use our smartphones.

The $999 Wing is a bold experiment, but it can’t translate that creativity into a phone that’s worth the added price.

Our review of LG Wing 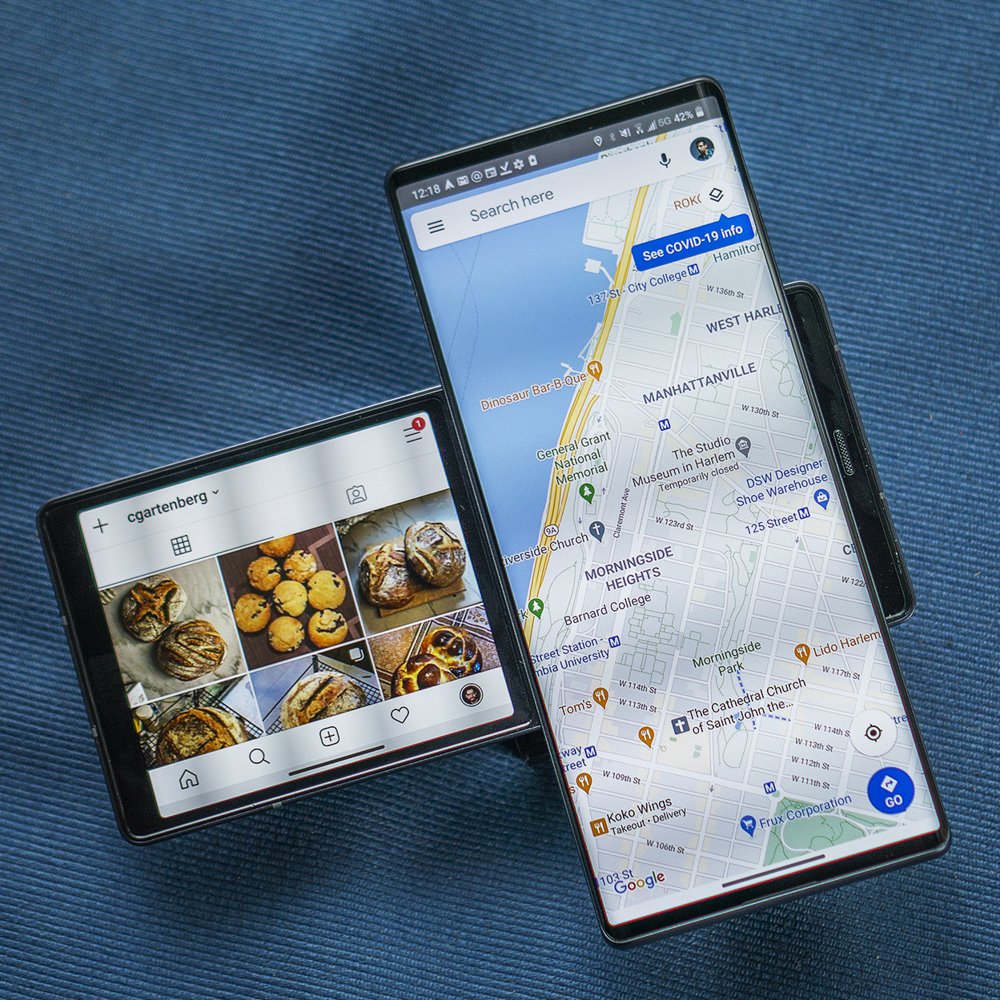 The LG Wing looks cool, but it’s also expensive — at $999, it costs as much as a brand-new iPhone 12 Pro or Galaxy S20 and more than plenty of other fantastic phones. That’s a lot of money to put down on a funky screen gimmick, which ultimately is the biggest factor that separates the Wing from less expensive phones with similar specs, like the Motorola One 5G, the Pixel 4A and Pixel 5, and LG’s own Velvet from earlier this year.

So, let’s talk about those screens.

Looking at the Wing, it’s easy to mistake it for just another supersized Android phone. In fact, it looks similar to the LG Velvet, a phone with which it also shares most of its specs. With a 6.8-inch, 9:20.5 OLED display, it’s just a bit smaller and a bit thicker than a Galaxy S20 Ultra. Credit to LG’s design here: at 0.43 inches (10.9mm) thick, it’s still compact enough that you wouldn’t necessarily guess that there’s anything more to it. (I tried, in fact, with several family members, none of whom suspected anything out of the ordinary.)

Of course, the Wing isn’t just a big Android phone. With just a flick of the lower right corner of the phone, the entire main display swivels up and around to a horizontal orientation, revealing a second, 3.9-inch OLED screen underneath.

The mechanism is top-notch

The mechanism is top-notch, with the display gliding smoothly and snapping shut with an incredibly satisfying, audible “snick.” Check out our hands-on video here for a better idea of what that all looks and sounds like. (As an aside, the Wing can effectively only be opened if you hold it in your right hand, which may or may not be an issue for some people.)

The actual engineering behind the Wing is fascinating, involving clever mechanical tricks and a miniature hydraulic damper — JerryRigEverything’s teardown has a good look at how it all works. And you can actually feel that damper kick in when you slide open the phone — there’s an ever-so-small half-second pause as the display gets caught on the damper, which then slowly and gently finishes its rotation.

While the hardware is excellent, the Wing reveals that as cool of a concept as the rotating and secondary displays are, there are just not enough practical use cases to justify them.

There aren’t that many applications that it makes sense to run in a horizontal orientation on Android. Most phone apps are designed to be used in portrait, the way that most people hold most phones most of the time. And even apps that do have landscape modes (like Twitter, Gmail, or even Chrome) just don’t look very good that way.

Technically, you can use the phone rotated so the main display is vertical, with the smaller screen sticking out like a little vestigial limb, but it’s awkward to hold the Wing that way, as the bulk of the weight of the phone is still almost entirely in the now-horizontal back portion.

The best use case is for video or gaming — tasks that actually benefit from a horizontal orientation and can have potentially useful second-screen apps. But there were so few situations in day-to-day use where I found it to be faster or worth the extra time and effort to fiddle around with the second screen mode instead of just switching back and forth between apps. Sure, you can watch a YouTube video and text at the same time, but buying a phone just for the vanishingly few times that you might need to do that seems unnecessary.

If you’re willing to sit down and go out of your way, you can come up with a few use cases where it actually makes sense to use the Wing the way LG imagines. It’s a fantastic device for completing weekly challenges in Fortnite, for example: I could play the game on the main screen while keeping a Chrome window or YouTube walkthrough open to show the location of the specific items I needed to collect or objectives that I had to accomplish.

If you have a terrible attention span during movies, it’s also good for scrolling through Twitter or checking IMDb to figure out what TV show that actor was in while watching Netflix, although the second small display is hard to use for any overly complex tasks due to its size and nearly square aspect ratio.

There’s a constant awkwardness to using the software on the Wing. While a few apps — like LG’s built-in note-taking software or music apps — are designed to take full advantage of the dual display, support is rare on third-party apps. It’s easy to imagine a world where more apps could take advantage of a second display: games could offer a Wii U-esque second screen experience for maps or inventory, or Maps could display a list of upcoming directions over on the side of your main navigation. But support is few and far between (of all the games I tried, only Asphalt 9 had any real second-screen support).

YouTube, for example, will pop up a useful set of media controls when you’re watching a video on the second display, but nearly every other video app doesn’t offer similar options. It’s a shame, too, because the screen covers the volume keys on the side when rotated out, and they’re already hard enough to find given the size of the Wing and the fact that they’re the same size and shape as the power button (which is located directly below).

Another barrier is the Wing’s use of an in-display fingerprint reader, which is located on the bottom of the main display (where you’d think it would be). But the natural way to use the Wing isn’t to tap the screen and unlock the fingerprint reader; it’s to swing open the second display, which puts the fingerprint reader impossibly out of reach. I first registered a finger on my other hand to unlock the phone, and then just shut it off altogether. LG seems aware that it’s an issue: when the phone is swiveled open, the numpad for manually entering a password appears on the smaller screen under your thumb, but short of adding a second in-display scanner on the secondary screen, I’m not sure what a good solution here is.

The rest of the Wing checks nearly every box for an upper midrange Android smartphone. The Snapdragon 765G, combined with 8GB of RAM, is enough for smoothly running nearly everything (although there’s still the occasional spot of lag, particularly when it comes to rotating open the display). And the 4,000mAh battery is enough to easily last a full day of battery life, even with heavy use of both displays.

The LG Wing also has support for 5G; the model I tested was the Verizon variant, which offers support for both millimeter wave (mmWave) and sub-6GHz connections (including Verizon’s newly launched nationwide network). Speeds on that network were marginally better than LTE, but the real benefit comes from Verizon’s mmWave network, which is still scarce. Like any other 5G phone, unless you live directly on top of a mmWave hotspot, it’s not a great reason to get the Wing specifically.

There are also a few misses for a $1,000 phone: the screen refresh rate is limited to just 60Hz on both displays, which can help contribute to the occasional slowness of the phone (especially considering that nearly every other Android phone in this price range offers better). There’s no waterproofing, although it’s admittedly hard to imagine how LG could have accomplished that with the swiveling design.

The LG Wing has four cameras: a single 32MP pop-up selfie camera built into the top frame and a trio of rear cameras on the back. The pop-up camera isn’t just a style choice to eliminate the notch, either. It’s necessary to keep the camera located where it should be, even when you’re rotating the display.

The main camera is good, with bright colors and a good level of detail. But low-light performance isn’t on par with 2020’s best phones, and while LG’s night mode helps to alleviate that, it comes at an additional loss of detail in exchange for the brighter shot.

But the most notable camera feature is the gimbal mode, which takes advantage of the Wing’s design: the main display shows your video output, while the smaller panel works as the grip, complete with gimbal controls. But as much as it looks like a real gimbal mount, LG’s implementation is almost entirely software-based — the camera isn’t rotating around on a different axis to keep in place, like an actual gimbal mount would. It’s just using digital cropping on the wide field of view.

The gimbal mode is neat, but it’s just a software trick

Still, the software effect is impressive: LG does a good job of keeping footage locked and stable, even through a fair amount of motion. Panning around a frame also results in smooth, clean footage. But the fact that it’s entirely done through software means that what looks like the Wing’s most unique feature is actually something that LG could replicate on any device, if it chose. And given the Wing’s already pricey cost, it’s hard to imagine that you’re getting a better experience here than with a cheaper combination of say, a Pixel 5 and a motorized smartphone gimbal.

Like the rest of the Wing, the cameras aren’t bad — but for what the phone costs, you can get better for your money.

In my time with the Wing, there was one app that was perfectly suited to its unique design: the now-doomed streaming service, Quibi, whose similarly gimmicky “Turnstyle” video format (which is designed to seamlessly swap between portrait and landscape versions of a clip) was practically made for a phone that can instantly rotate its display to do the same.

But unfortunately, it feels like the LG Wing — at least in its current incarnation — is set for the same fate as Quibi, outclassed by products that offer more and better service for less money.

The LG Wing’s rotating display is a marvel of engineering and an incredibly fun novelty, the kind of design innovation that’s exciting to see in a world where most smartphone designs are just variations on the same identical black slabs. But being new and interesting doesn’t mean that something is good, and without better software support or a lower price tag, it’s hard to recommend the Wing for anyone but the most jaded smartphone owners.

To actually use the LG Wing, you’ll have to agree to:

Final tally: three mandatory agreements to use the phone at all, another two for Google account services, and eight additional optional agreements.