Mokumono’s electric bike is unlike any e-bike you’ve ever seen. Instead of a series of tubes, the sporty Delta S is constructed from two mirrored sheets of aluminum that are pressed into shape and welded together by a laser-wielding robot.

It’s a manufacturing process that two 30-year-old Dutch twins, Tom and Bob Schiller, borrowed from carmakers. Their aim is to localize the mass production of Mokumono’s bicycle frames at home in the Netherlands instead of outsourcing it to factories in China or Taiwan. Not only does it give the brothers more control over the assembly process, but by sourcing as many parts as it can from Europe, they’re able to reduce the environmental waste created by shipping parts around the globe.

Mokumono’s long-term goal is to use only locally made parts. It’s an ambitious and laudable target. But first, Mokumono has to prove that its very first e-bike is worth the asking price of €2,990 (about $3,499).

Our review of Mokumono Delta S 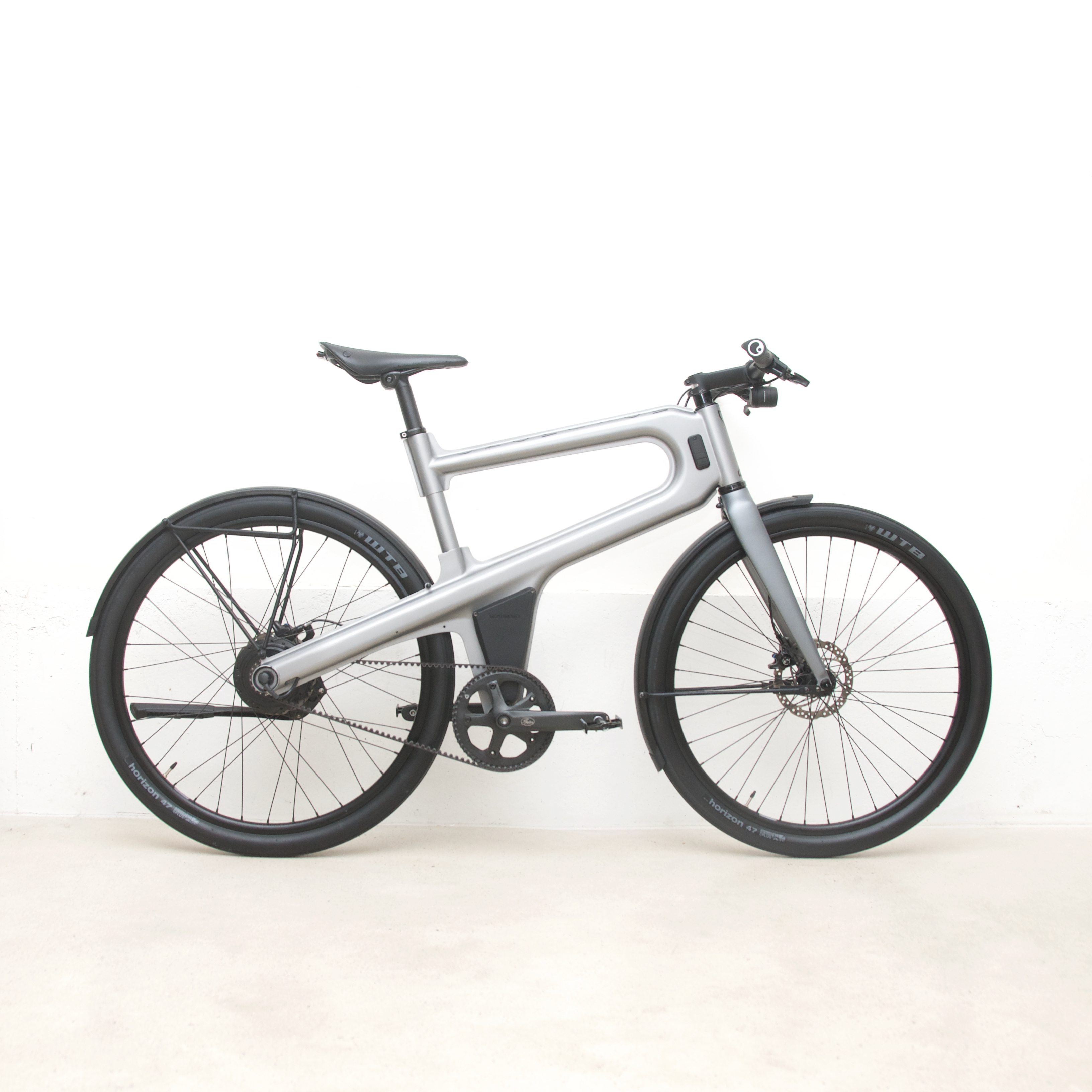 The name Mokumono is an amalgamation of “Mokum,” a nickname for the city of Amsterdam where the company is based, and “Mono,” for the unique monocoque bicycle frame used on the Delta S.

Riding the pedal-assisted Delta S is quiet, smooth, and comfortable, thanks to those beefy 650cc WTB Horizon tires, Brooks Cambium C15 saddle, and Ergon GA3 grips, even on the cobbled streets of Amsterdam where I tested the Delta S for the last few weeks. I rode primarily in the maximum of the three pedal-assisted power settings, which best takes advantage of both the bike’s sporty riding position and my aggressive riding style.

Some of the weight savings is due to the relatively tiny 250Wh battery capacity found inside the Delta S, fitted into the triangular space just above the pedals. That’s half the 504Wh-capacity battery of the VanMoof S3. Nevertheless, I managed a little over 54 km (34 miles) during my range test before the juice ran out, which is impressive for such a small battery. The small capacity also allows the battery to be recharged quickly in about two hours. The bike can be ridden with a dead battery, but it’s a heavy slog due to that single-speed transmission.

My review bike was fitted with an optional Brooks cycle bag that quickly snaps onto the integrated pannier mount. With this configuration, I was able to easily bike to a local golf course, shoes in the pannier and clubs slung over my shoulder, for the 15-kilometer (9.3-mile) journey. Despite my appearance, the bike still drew more attention and admiring questions than my equipment.

I have one complaint about the Delta S related to power delivery from a standstill: the torque sensor’s tuning creates a slight power delay when trying to get off the line quickly, transferring the load to your legs instead of the motor. When I first received the bike, the Gates belt was set for a less powerful rider, causing it to slip consistently whenever I stomped on the pedal. After Mokumono adjusted it, it slipped less, but the issue wasn’t eliminated. Instead of adjusting the belt, it’s my opinion that Mokumono should tune the power of the Delta S to match its single-speed transmission and sporty good looks. Both the Cowboy V3 and Gogoro Eeyo 1S are examples of single-speed belt-driven bikes with 250W motors and torque sensors that are tuned to deliver power immediately from a standstill and then assist with pedaling in a very intuitive manner.

Having said that, I’m sure my tested range would have been considerably less if the motor had been powering my torque-heavy starts instead of my legs. There’s always a trade-off.

Mokumono tells me the company is working to allow riders to tune the power in an app, but the feature isn’t ready yet. The Delta S is currently hitched to the app provided by Hydrive, the company that provides the bike’s motor. But Mokumono isn’t happy with it and is currently developing its own app for release next year. I didn’t use any app at all during my testing, which is fine by me: most are terrible and add little value.

A small control panel located on the right-hand side of the frame near the head tube has a power button that also allows you to set the assist level and see the remaining battery. It’s basic, but it gets the job done, even if you have to crane your head to see it.

Mokumono got its start in 2014 as a Design Academy graduation project to make a truly Dutch bike. In 2016, the brothers raised some money to build a standard bike via crowdfunding, and here they are in 2020 with an e-bike ready to capitalize on surging demand. Right now, however, the brothers have only sold a few dozen e-bikes, nearly all of them in the Netherlands.

Next year, the company plans to introduce a second Delta C model (“C” for comfort) for riders wanting a more upright position. The company will also be focusing on sales to Germany by partnering with at least one bike shop in every major German city to offer test rides and service.

Mokumono is very much a startup. And after putting almost 100 km on the Delta S, I can say unequivocally that Bob and Tom make a very fine electric bicycle.

True, €2,990 isn’t cheap, but the company doesn’t ship in the volume required to drive that price down to VanMoof levels of €1,998. But buying a Delta S does get you a fully specced urban commuter with premium components like a Brooks saddle, Gates Carbon belt drive, and Supernova lights. You also get a design that easily stands out from the pack. And unlike Amsterdam-based VanMoof, which just opened a dedicated factory in Taiwan, Mokumono’s founders are committed to bringing bicycle manufacturing back to Europe. And big dreams like that have to be worth something.