Unlike AirPods Pro or Bose’s QuietComfort Earbuds, these noise-canceling buds can pair with two devices at once

Over the last several years, Jabra’s true wireless earbuds have consistently earned positive reviews and are often at the top of recommendation lists for people who aren’t interested in Apple’s AirPods. Last month, the company announced its latest set — and first to ship with active noise cancellation. The $230 Elite 85t are Jabra’s most premium earbuds yet and meant to go toe-to-toe with the AirPods Pro and Bose’s new QuietComfort Earbuds. But in a surprise bonus, Jabra said it would bring ANC (albeit a less effective implementation) to its existing Elite 75t and Elite Active 75t via a firmware update.

The 85t buds have a new chip dedicated to noise canceling, which allows them to cancel out a wider range of outside sounds than the 75t, where the ANC feature feels tacked on. But while they look and feel very similar to the prior model, Jabra has made some consequential design choices. Most notably, the 85ts now have a “semi-open” design that eliminates the plugged-up ear feeling of older sets. That change comes with sacrifice, however, as these earbuds aren’t capable of the same resounding, impactful bass as the 75t. Jabra has also switched to oval-shaped ear tips — likely necessitated by the larger 12mm drivers and ANC circuitry — that feel slightly less secure in my ears compared to the older round style. And the Elite 85t buds are rated IPX4 for water and sweat resistance, a downgrade from previous Jabras.

Our review of Jabra Elite 85t 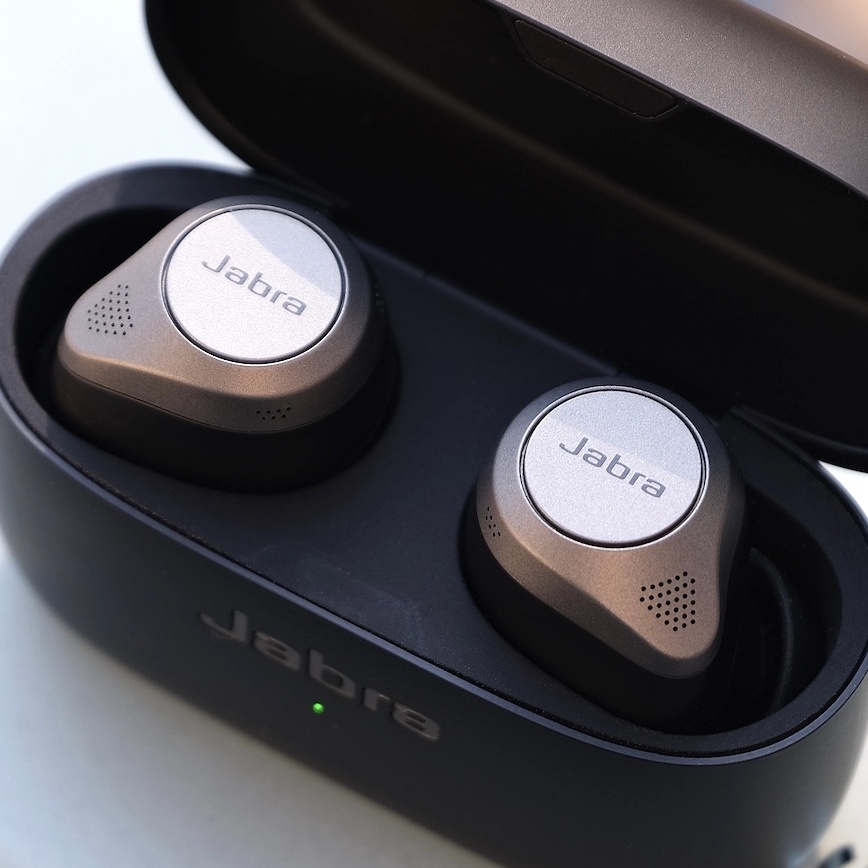 But even with those changes, the Elite 85ts are among the better noise-canceling earbuds on the market, thanks to their best-in-class controls, wealth of features, and reliable performance. The main question is whether the noise cancellation is worth the added cost over the Elite 75t. Considering the differences in water resistance and sound quality, it’s not a straightforward answer.

Picking up the 85ts, everything feels very familiar. They’re slightly larger and heavier than their predecessors, the drilled microphone holes are much smaller (likely to keep out dust), and the most obvious change is those oval speaker grills. The case has also grown in size a tad, but it includes Qi wireless charging; the 75t buds are only available with wireless charging if you order them direct from Jabra. (The charging LED is at least now on the case’s front instead of bafflingly on the back near the USB-C port, as it is on the 75ts.)

There’s still a circular button on each earbud that responds to single, double, and triple presses. You’re given a ton of freedom over customizing the controls in the Jabra app, and those changes — like any EQ adjustments you make — stick with the earbuds from device to device. The 85t earbuds are rated IPX4 for water and sweat resistance, which is down from the IP55 of the Elite 75t and IP57 of the Elite Active 75t. IPX4 puts these at par with the AirPods Pro and QuietComfort Earbuds and means they’re capable of surviving splashes of water, but heavy sweaters should be wary of making these their fitness earbuds. (It’s unclear whether Jabra eventually intends to release an Active version of the 85ts.)

Before we get to the noise cancellation, let’s quickly call out one of the best things about Jabra earbuds: multipoint. While most true wireless earbuds can only connect to a single device at a time, Jabra’s can handle two at once. You can be listening to music from your laptop and take an incoming call on your phone without having to manually switch the earbuds over.

That’s a trick that the Bose QuietComfort Earbuds, Sennheiser True Momentum Wireless 2s, and Sony’s 1000XM3 buds are simply incapable of. (I’d argue AirPods get a pass here since they can now automatically switch between Apple devices without you having to do anything, and if you own AirPods, you’re probably in that ecosystem.) Multipoint works well on the 85t earbuds, seamlessly switching back and forth between your phone and PC or tablet based on what’s actively playing audio. All of Jabra’s earbuds dating back to the Elite 65t offer this feature, but here, you can combine the convenience of multipoint with powerful noise cancellation.

Jabra’s active noise cancellation performance in the 85t buds is impressive. You can adjust the intensity of ANC with a slider in the Jabra app, and at maximum, I’d say it’s up there with the Sony 1000XM3 or AirPods Pro — but definitely a rung beneath the QuietComfort Earbuds, which I view as the new benchmark.

But as I mentioned earlier, the 85t earbuds differ from past models because of their new semi-open design. When you turn ANC completely off (which can only be done inside the Jabra app), you can definitely hear more ambient noise than with the 75ts, which seal into my ears really well and have the added benefit of great passive noise isolation. I found that the new, oval-shaped tips of the 85 didn’t quite twist into my ears as snugly or as deep; they never fell out or came close, but I could remove them with less effort than the 75ts. This comes down to preference: I know there are many of you who will prefer the airy design of the 85t, which can be worn for long stretches without any noticeable discomfort or pressure buildup.

But keep in mind that Jabra recently updated the Elite 75t with active noise cancellation. By itself, it’s less effective than the 85t, but the noise isolation of the 75t earbuds helps make up the gap some. In the end, I think it’s almost a wash between the two. The Elite 85ts still won out and hushed more noise when I tested them side by side in a coffee shop or on the streets of Brooklyn, but not lopsidedly so. If you’re someone who dislikes the plugged-up feeling that regular earbuds can give, the 85ts are the better choice, but the added comfort means paying more. I don’t mind that closed-off feeling at all, so I’d probably stick with the 75ts.

That’s also because of sound quality. The 85ts use new 12mm drivers that deliver slightly better detail and presence (and roll off some of the harshness of the 75t treble), but there’s really not that much of a difference between these two sets of earbuds. The 85ts have a fuller mid-range; the overall EQ feels less blatantly V-shaped — but all of this can be adjusted to your liking.

However, while the semi-open design results in a wider soundstage, it also means the 85ts lose some of the amazing low-end kick that the 75ts are capable of. If you lean toward less sculpted EQ, you might prefer the more even balance of the 85ts; the bass isn’t lacking, it’s just not as head-rattling as the 75ts. I’m pleased when using either set, but even the higher-end 85ts trail competitors like Sennheiser and Bose if top-notch sound is your deciding factor.

Battery life is rated at 7 hours with ANC off (half an hour shorter than the 75t) and 5.5 hours with it enabled, which is fairly standard. Factoring in the case, you can get up to 25 hours of total listening time. As has become standard for Jabra, call quality remains a strength on the 85ts. People said my voice was crisp and came through clear without much background noise. But you can still only use the right earbud by itself since that’s the primary bud that relays audio to the left one. I wish Jabra would make them both independent (especially at this higher cost), but we’re not there yet.

A few other things worth touching on quickly:

As with other earbuds, the Jabra Elite 85t can be paired over Bluetooth without ever agreeing to anything in software. But since the Sound Plus app is so important for customizing EQ and the earbud controls, it’s basically essential.

Overall, I think the Elite 85t earbuds are Jabra’s best earbuds yet: the noise cancellation is quite good, they deliver rich audio quality, and you can use them with two devices at once. But there are a lot of people who will be better off saving money and just going for the Elite 75ts. For me, the older earbuds fit better, and I prefer their noise isolation over the semi-open feel of the new buds. But maybe the combination of noise cancellation and an airy fit is just what you’ve been looking for. If the AirPods Pro don’t meet your needs, it’s hard to go wrong with the Jabra Elite 85t.