A worthy RTX 3080 competitor for gaming

Share All sharing options for: AMD Radeon RX 6800 XT review: AMD is back in the game

As a teenager, I used to love AMD. I would proudly stick AMD and ATI stickers to the front of the custom PCs I built, excited to use the latest and greatest Athlon 64 processor and an ATI Radeon 9800 card. That was 17 years ago, before AMD acquired ATI in 2006. AMD went on to kill off the ATI brand in 2010 and has struggled to compete with Nvidia and Intel ever since.

It’s been a long time since I’ve been excited about AMD processors or graphics cards, but the past couple of weeks has totally changed that. After stealing the performance crown from Intel with its latest Zen 3 CPUs earlier this month, AMD is now setting its sights firmly on Nvidia. The new $649 AMD Radeon RX 6800 XT is available today, and it’s $50 less than Nvidia’s most direct competitor, the RTX 3080. AMD is promising it will match or outperform the RTX 3080 at both 4K and 1440p gaming.

I’ve put those performance claims to the test over the past week, and the results are surprising. AMD is back in the game. Big time. 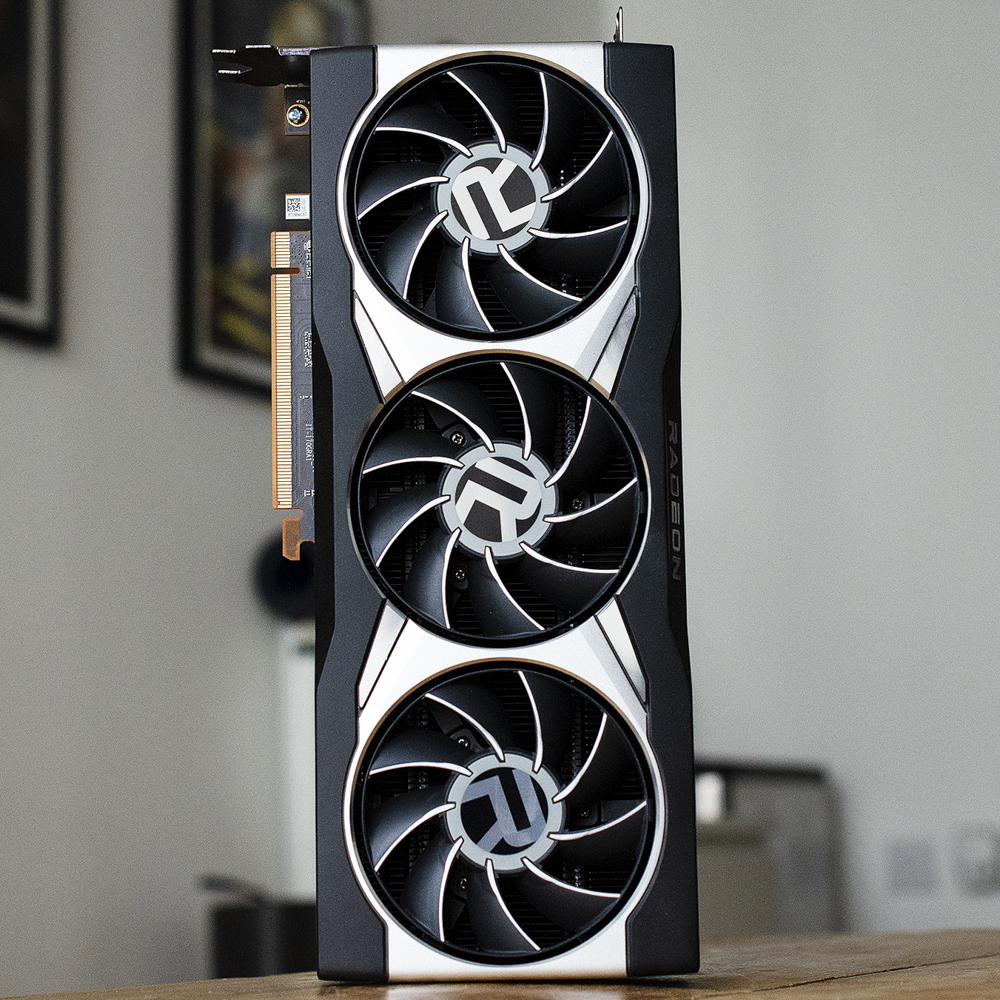 The construction of the Radeon RX 6800 XT is what I’d call normal. There’s no dual-fan setup here, nor a fancy new PCB or a 12-pin connector. It’s just the typical 2.5 slot card with two regular PCIe eight-pin power connectors and a triple-fan system for cooling. AMD hasn’t reinvented the wheel here, and it has stuck very much to the basics.

It has, however, opted for an axial cooling solution, instead of the extremely loud blower-style it has used in the past. This means that the three fans at the bottom of the card work to pull in air to cool the 6800 XT, which is then exhausted out of the side into the rest of your system. At the side there’s a big red Radeon sign, which also glows red when it sits in your case. During my testing, I found this new cooling system to be a lot quieter than what I’ve experienced from AMD’s previous cards.

At the rear, the 6800 XT includes two DisplayPort 1.4 connectors, a single HDMI 2.1 port, and a USB-C port for VR headsets. The USB-C port is also monitor-capable, and even supports 27W charging.

Just like Nvidia, AMD is recommending a 750W power supply for the 6800 XT. However, AMD’s card draws up to 300 watts, compared to the 320 watts that the RTX 3080 can draw. It’s a small difference, but every little bit helps for any impacts on the environment and electricity bills. I’ve also noticed that the 6800 XT runs around 77 degrees Celsius, which is a lot cooler than we saw on the Radeon VII.

I’ve been testing the 6800 XT on a newly built machine using Intel’s latest Core i9-10900K inside. For 1440p tests, I hooked up the 6800 XT to a 27-inch Asus ROG Swift PG279Q monitor. This monitor supports refresh rates up to 165Hz plus, so it’s ideal for AMD’s latest card. I’ve also been testing 4K performance, which you can find below.

I’ve put the 6800 XT head to head with the RTX 3080 in a variety of games we typically test and some new titles like Watch Dogs: Legion and Assassin’s Creed Valhalla. In most of the games I’ve tested, the 6800 XT outperforms the RTX 3080 at 1440p.

When the 6800 XT outperforms in certain titles, it does so comfortably. Shadow of the Tomb Raider manages a full 10fps more on AMD’s card, and with Assassin’s Creed Valhalla, it’s nearly 20fps. In other titles, it’s extremely close on performance between the two cards at 1440p, but most of the time AMD’s Radeon RX 6800 XT is holding its own against the RTX 3080 or beating it.

Just like the RTX 3080, the 6800 XT is a great choice for 1440p gaming. The majority of games I’ve tested have comfortably exceeded 60fps at max settings, with competitive titles like Fortnite and Call of Duty: Warzone hitting more than 100fps.

This all sounds great for AMD for pure rasterization, until you hit ray tracing. Nvidia has been pushing ray tracing for years, but this is AMD’s first card to enable real-time ray tracing. Unfortunately, the 6800 XT fails to match the RTX 3080’s frames per second when using ray tracing performance in both Control and Metro Exodus. Control is one of the best examples of ray tracing to date, and it’s a good guide to what we might expect to see as more games pick up ray tracing.

Watch Dogs: Legion is emerging as another good example, but I wasn’t able to test it properly on the 6800 XT. Ray-traced reflections simply don’t work with AMD’s drivers yet, making it difficult to compare to the RTX 3080. AMD tells me a future driver update will address this.

The 6800 XT manages to comfortably deliver 60fps or more in games like Fortnite, Gears 5, and Assassin’s Creed Valhalla, but it falls behind the RTX 3080 in Control, Watch Dogs: Legion, and Metro Exodus. I noticed this the most when playing Control, as the 6800 XT would regularly drop well below 60fps to the point where it felt unplayable at times.

In other games, the 6800 XT excels at 4K. It comfortably beats the RTX 3080 in Call of Duty: Warzone by more than 10fps, and the limited ray tracing in this game doesn’t seem to have a big impact on performance, either. Even in the games it drops behind the RTX 3080, the 6800 XT still delivers impressive 4K performance across the board.

Just like with 1440p, ray tracing in 4K is where the 6800 XT falters. Control and Metro Exodus are both unplayable in most areas with full ray tracing enabled at 4K. The gaps in performance can’t be improved on AMD’s side yet, as the company doesn’t have an equivalent to Nvidia’s DLSS.

As you can see in the chart above, DLSS offers a significant boost to frame rates while maintaining similar image quality in the games that support it. It was truly transformative for the RTX 3080, but AMD is still working on its own solution. AMD’s own super sampling will be designed to improve ray tracing performance, but we still don’t know exactly how it will work yet or when it will arrive.

AMD says its goal for ray tracing is to hit native 1440p or 1080p resolutions, rather than push performance at 4K. That means the 6800 XT will probably always be behind Nvidia when you turn ray tracing on, but competitive when it’s off.

Nvidia’s advantage here is clear, and more and more games are being updated with DLSS and ray tracing. Ray tracing and a lack of a DLSS equivalent is the one big area where AMD falls behind Nvidia, and if you care about switching ray tracing on then you should go with one of the new RTX cards instead of the 6800 XT.

One area where AMD has always struggled is driver support. That appears to be continuing with these early drivers for the 6800 XT. Ray-traced reflections are missing in Watch Dogs: Legion, and some textures in Assassin’s Creed Valhalla don’t always render correctly or have black texture corruption. Call of Duty: Modern Warfare also crashes sometimes with ray tracing enabled.

I think it’s reasonable to expect drivers to be ready for games like Assassin’s Creed Valhalla and Watch Dogs: Legion, especially when it feels like the competition is constantly pumping out game-ready updates for every single big game launch.

These early issues make me a little nervous that AMD’s driver support still needs work, but there are other areas where it’s ahead of Nvidia. The AMD Radeon software includes a neat dashboard with access to all the settings and game optimizations you could want. You can tweak individual games easily to enable or disable AMD features, or you can even see how your performance compares to similar systems.

This software is truly great, and there’s even quick and easy access to overclocking tools if you want to push things a little further. Nvidia splits its tools and driver settings into two sections in its GeForce Experience app and Control Panel. Heading into the Nvidia Control Panel is like a trip down memory lane to Windows 95, as the interface is ancient and not very user-friendly at all.

AMD’s basic control panel might be better, but Nvidia also offers a range of RTX features that are designed for creators. AMD doesn’t really have any equivalents to things like RTX Voice that make background sounds magically disappear on voice and video calls, or even RTX Broadcast that includes virtual backgrounds and auto framing.

These are particularly useful during a pandemic, where you might be stuck on video calls more often than not, and it’s clear Nvidia has an AI advantage here.

I’m surprised that AMD has managed to catch up to Nvidia at the premium end of PC gaming and even beat the RTX 3080 more often than not at 1440p. The gap has also narrowed on the 4K side, but Nvidia still takes the edge and a clear advantage for ray tracing and super sampling.

The fact that AMD has managed to narrow this gap is impressive. It has done so with architectural improvements, while still delivering a graphics card that works like we’d expect with a healthy amount of VRAM (16GB). There’s no fancy cooling or a clunky power adaptor, and it’s on par with the RTX 3080 at a lower price point and using less power.

If you’d said to me earlier this year that AMD was going to catch up to Nvidia, I would have probably laughed. The RX 6800 XT is a worthy competitor to the RTX 3080, and it’s more than capable of 4K and 1440p gaming.

AMD now has to prove it’s able to deliver ray tracing performance improvements and deliver super sampling to really compete fully for next-generation games. If it can, then this will be a card that will deliver great performance for years.

If you’re still struggling to pick up an RTX 3080, AMD might just have you covered here. AMD has made 4K gaming just a little bit more affordable than even Nvidia was able to. Let’s just hope there are more than a handful of cards available.

It might have taken more than 10 years, but AMD is finally back and competitive. And that’s great for every PC gamer.