But try to find an AMD model

The Acer Aspire 5 is a very functional laptop. I used it as my primary work driver for over a week, including the whirlwind that was Black Friday weekend. It loads the pages I need it to. It handles a heavy share of tabs and apps without burning itself up. It’s not seven pounds. Basically, it’s a $549 laptop that doesn’t completely suck.

There was a time when that would’ve made this the best budget laptop you can buy. But that time has come to an end, and the reason rhymes with “bay-MD.”

This Aspire 5 model has a four-core Intel Core i5-1035G1, the same budget- and midrange-oriented processor that powers Microsoft’s Surface Laptop Go. Performance-wise, it gets the job done — but its battery life is disastrous, and its integrated graphics are behind the times at this point. My advice: if you can get your hands on one, buy the AMD model with a six-core AMD Ryzen 5 4500U for the same price instead.

Our review of Acer Aspire 5 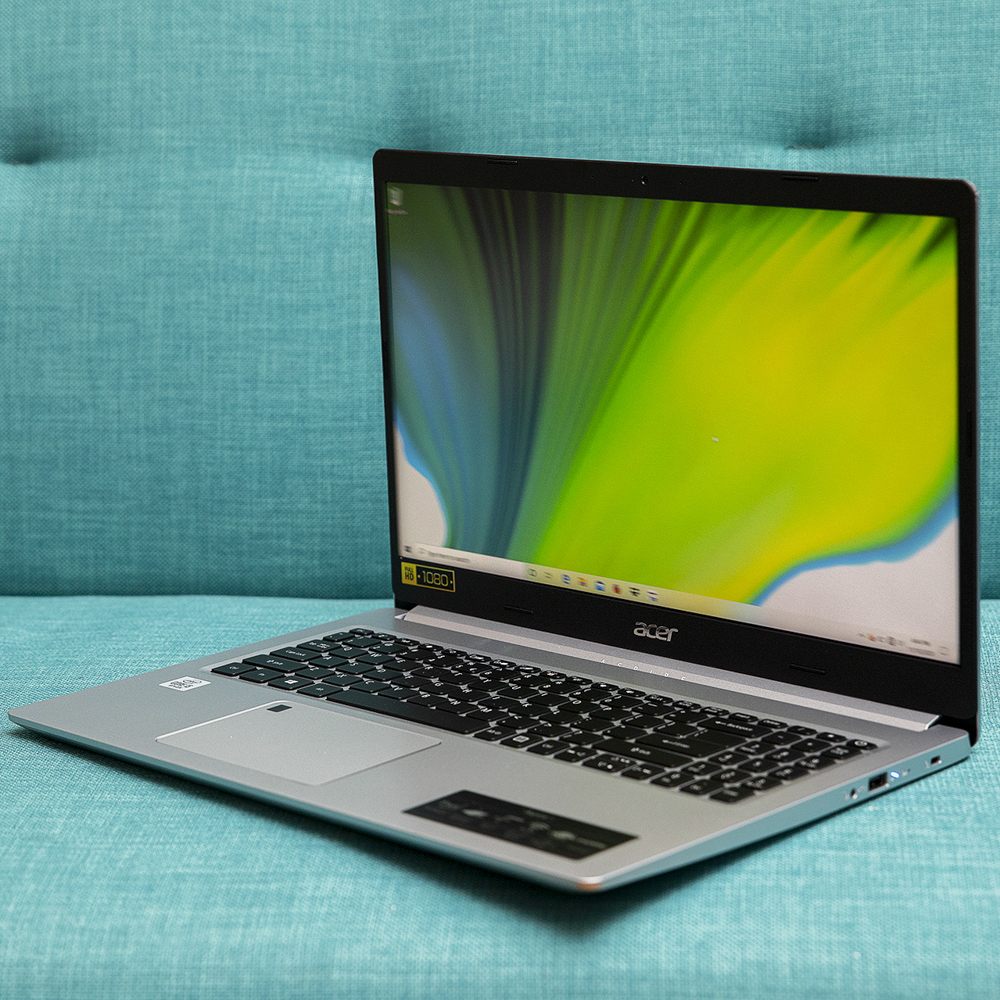 Starting with the design, which is the same across both models. I’d say the Aspire 5 looks fine — it’s no Dell XPS, but it’s still respectable from all angles. It comes in a few colors including silver and black. (I have the silver one, though I think the black looks a bit fancier myself.) Most of it is plastic, but the top cover (the part people are most likely to see) is aluminum. There’s some flex in the keyboard and the screen, but not so much that I worried about snapping the thing in half. It’s neither ultraportable nor overly clunky, weighing 3.7 pounds (1.8 kg) and measuring 14.3 x 9.9 x 0.7 inches. Students should note that while the Aspire isn’t terribly heavy, its breadth makes it a bit of a chore to fit in a standard-sized backpack alongside a load of books and binders.

A few other touches you might notice: Like the higher-priced Swift line, the Aspire 5 has a lustrous center hinge with “Aspire” printed across it, which is a nice bit of flair. The bezels, though, are quite large and very plastic-looking. The top one is particularly hefty.

All fair enough. At $549, I’ll take it. But it is worth noting that you don’t need to spend all that much more to get significantly higher build quality if you’re willing to compromise on screen size. The Acer Swift 3 (if you’ll take a 14-incher) is a nicer-looking, slimmer, and sturdier-feeling machine. Its Ryzen 5 4500U model is only $80 more expensive than this Aspire 5 on Acer’s website (and is even cheaper when it’s on sale).

The strength of such a large chassis, though, is that there’s room for a useful port selection. In total, we have one USB 3.1 Type-C Gen 1, two USB 3.1 Gen 1, one USB 2.0, one HDMI 2.0, and one Ethernet, as well as a power port. That’s comprehensive, though you’ll need to look elsewhere if you’re seeking Thunderbolt support, a typical omission in this price range.

The display is a bit of a dud on paper. I measured it as covering just 66 percent of the sRGB gamut and 50 percent of AdobeRGB. It also maxes out at 220 nits of brightness. Those are both mediocre as laptop screens go, though they’re not terrible for the category; color-wise, the Aspire actually scored slightly better than the IPS panel on the Swift 3, as well as the Asus VivoBook 15.

The viewing experience wasn’t as bad as those metrics might indicate. The matte panel did a good job of reducing glare; even around 90 percent brightness, I could use the machine outdoors without a hassle. And while Netflix and YouTube looked drab next to more expensive screens, media consumption is still very doable. (Especially because the audio is quite good. It has a nice surround quality and can easily fill a room — I’d put it on par with a decent external speaker. I could actually hear the bass and percussion in my music.)

The Aspire has a nice keyboard. It’s backlit and quiet with decent travel. (It’s mushier than it is clicky, if you have strong feelings about that.) There’s a numpad on the right side, which is a nice feature, but it does push the touchpad to the left. This was irksome for me as someone with small hands. The area that was natural for me to touch with my right hand was the right-click area. I had to intentionally stretch over to left-click, and I never really got used to it — even after a week and a half, I was still accidentally right-clicking all the time. There’s also an embedded fingerprint reader in the top-left corner of the touchpad, but its location wasn’t super convenient for me as a righty and I never ended up using it much.

The Acer Aspire 5 presents you with multiple things to agree to or decline upon setup.

In total, that’s six mandatory agreements and 17 optional ones.

Of course, performance is what really makes or breaks a budget laptop. The base Aspire 5 configuration, listed at $399.99 on Acer’s website, can come with a Core i3-1005G1 or an AMD Ryzen 3 4300U (both with 4GB of RAM and a 128GB SSD). There are a number of models at different price points, including some with touchscreens. The system we’re looking at is listed at $549.99 on Amazon and has Intel’s four-core Core i5-1035G1, 8GB of RAM, and 256GB of SSD storage. A system with the same specs and a six-core Ryzen 5 4500U is currently listed on Acer’s website for the same price (though it’s hard to find and looks to be sold out on Amazon as of this writing).

It’s important to caveat here that I haven’t tried the AMD system yet — but the six-core 4500U is an impressive chip. In the $799 HP Envy x360 13 (which also has 8GB of RAM), it easily delivered the fantastic performance I’d expect from a Core i7, and it could even run Overwatch on its High settings at over 60fps. Make no mistake: the Intel Aspire 5 didn’t give me any problems during my various office work, social media, emailing, and the like. But performance wasn’t quite as zippy as it was on the AMD Envy. And I got the sense that the thing was chugging — I could almost always hear the fans spinning, even when I was just running a few Chrome tabs. I wouldn’t have wanted to try anything more intense (and unlike Intel’s new Iris Plus graphics, its UHD graphics aren’t a good choice for anything but the lightest gaming).

That’s before we even talk about the battery life. This Aspire 5 averaged four hours and 49 minutes of my daily workload (12-15 Chrome tabs, Slack, Spotify streaming, and occasional Zoom calls on the Battery Saver profile at 200 nits of brightness). That’s not good, and it’s especially not enough for students who are out and about all day. AMD processors, by contrast, have been killing it on battery: the 4500U-powered Envy could churn out eight hours of my typical workload while the Swift 3 with a Ryzen 7 4700U got up to seven hours, and the 4800U-powered IdeaPad Slim 7 achieved a monstrous 13 and a half hours.

Final note: there’s some bloatware. I got some annoying Norton pop-ups and occasional notifications from various other programs that came loaded onto the Aspire. These aren’t the end of the world at this price point, but note that you may have to take some time to uninstall if the alerts are bothering you.

So, look, the Aspire 5 gets the job done. It works. It does what you need it to (at least until the battery runs out). There are even a couple areas where it’s punching above its weight class — the audio is great, and it’s nice to have a fingerprint reader.

But if you can get all those benefits plus a six-core AMD processor for the same (or a comparable) price, I see no reason not to go that route instead if you’re wed to the 15-inch system. AMD systems are hard to find, but I recommend digging around or waiting until one becomes available. And if you’re willing to spend a bit more for the Ryzen-powered Swift 3, you’ll see a noticeable difference in build quality and portability as well as multiple extra hours of battery life. For students and on-the-go workers, I think that’s more than worth the cost.