These earbuds are only made for sleeping

Share All sharing options for: Bose Sleepbuds II review: get your eight hours

Like I imagine many of us do these days, I often have trouble sleeping. To add to that, I have always been a light sleeper and can be easily awakened by a variety of noises: an especially loud siren outside, a crack of thunder, the heat suddenly coming on in the early morning hours. So I was the perfect person to try out the Bose Sleepbuds II, a set of $250 earbuds, which are specifically designed not to play music or podcasts, but to block out and replace sounds that might disturb your sleep.

The Bose Sleepbuds II are a pair of small — very small — earbuds that were built specifically to try to help you sleep using a combination of sounds and music. They are a follow-up to the rather disastrous introduction of the first-gen pair, which suffered from inconsistent battery life and sudden shutdowns. This second generation has gone through several improvements.

To begin, they are using a completely different battery technology. The previous generation were built around silver zinc batteries that, according to a Bose representative, “are very high in energy density, which makes them very good for an application like ours.” In other words, they could pack a lot of battery life into a very small package. But they turned out not to be ideal for consumer products — thus, the sudden shutdowns. As a result, the Sleepbuds II are based around more familiar nickel-metal hydride batteries, which means they have approximately 10 hours of life rather than the previous 16 but should prove to be more reliable.

Other changes include better low-end response to improve noise blocking, better connectivity, and an anti-friction coating to prevent extraneous sounds (like rubbing against a pillow) to interfere.

Our review of Bose Sleepbuds II 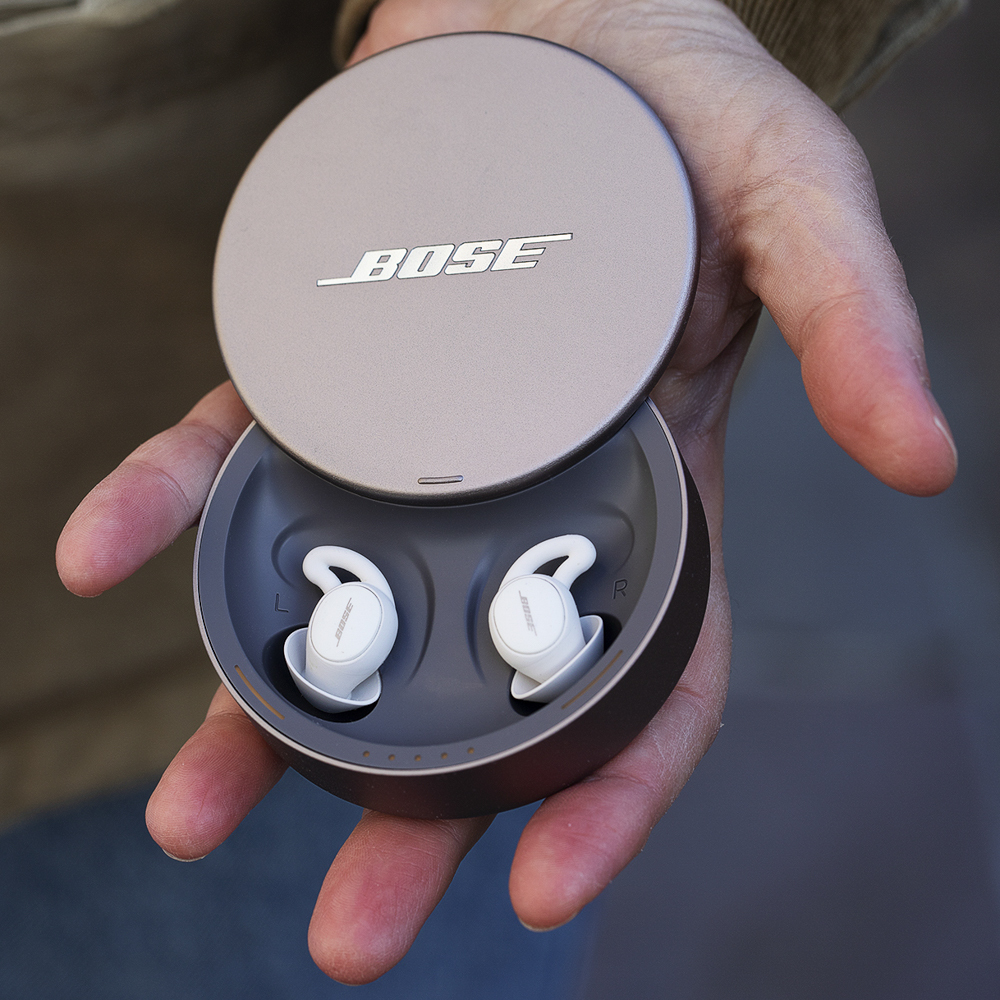 So now that we know what’s changed, how do they work?

The Sleepbuds II attach to your phone via a low-energy Bluetooth connection, which is used to transfer the various sounds to the buds. (Note that I use the term “transfer” and not “stream” since the sounds actually live on the buds rather than your phone.)

There are three classifications of sounds that you can listen to. Noise Masking sounds are supposed to cover up any noises (such as snoring) that can disturb your sleep. Naturescapes are meant to soothe you with natural sounds such as rain or leaves rustling. Finally, Tranquilities are quiet musical selections described as “relaxing tones.’’ A few of these are already loaded onto the buds when you get them; after that, you use Bose’s Sleep app to check out others you may want to use instead.

To tell you the truth, I couldn’t find much difference between many of the Noise Masking and Naturescapes sounds, especially since the former uses several nature sounds, such as a campfire or a breeze blowing. That didn’t bother me; both sets of sounds were pleasant enough. I was, however, disappointed with Tranquilities, which were, as far as I could tell, made up mostly of new-age genre music, useless to someone who finds that kind of monotonous tonality irritating. A quiet classical number would have worked a lot better for me — but of course, it’s a matter of taste.

The buds themselves come in a round, hockey puck-sized case with a top that slides open. They fit nicely into two small slots within the case, labeled for the left and right ears. The buds themselves are labeled for “L” and “R,” but the labels are covered by the tips, and so they aren’t much use. Still, it is easy enough to figure out which bud fits into which ear.

A series of small LEDs at the edge of the case let you know how much power is left in the case itself. It will hold two or three power-ups before it needs to be plugged in via a USB-C connection. (The only way to know if the buds are low in power is to check the app.) There is also an LED in front of each earbud that pulses while each one is powering up.

The Sleepbuds come with three differently sized tips. I tried the medium, which were on the buds when I first got them, but they were uncomfortable, verging on painful, so I switched to the small, which fit fine.

You use the associated Bose Sleep app to choose which sounds you want to listen to at night. The buds must be out of the case for them to attach to the app, and connecting takes around 15–20 seconds, but they always eventually attached. Because the sounds are directly downloaded into the buds, you can only have a limited number in your library at one time — usually about 10, although that can vary depending on which sounds you’re using. If you hit your maximum, you are warned that you have to remove a sound before you can upload another. The upload will take about 10 to 20 minutes — because the buds use low-energy Bluetooth, their upload speed isn’t going to be as fast as, say, your typical phone app — so it’s best to do your sound experimentation before bed.

Besides the sounds themselves, you can also set an alarm and be alerted to phone calls. Both are useful. But while you can be alerted that a call is coming in, you can’t answer the phone using the buds. So while you may not wake your partner with an early phone call, you certainly might when rushing out of the room to answer it.

If you don’t want to keep your earbuds attached to your phone all night, and you’ve already downloaded the sound you want to use, you can use the “phone free” mode. However, because you aren’t connected to the phone, you can’t use the alarm or be alerted to phone calls.

But do they work?

So, the main question: are they effective?

To tell you the truth, as someone who is not used to falling asleep to anything but relative quiet (I live in NYC, so it’s got to be “relative”), the idea of purposefully listening to sounds or music seemed a little off to me. But I have to say, after trying it out, it is not a bad idea at all. I like listening to rain, and there were several noise-masking “rainy” sounds that worked quite well. The buds didn’t mask everything, but they took care of random street noises and the baby next door quite well. And other noises were, if not completely masked, deadened to the point where they weren’t much of a disturbance. (I can also see where the Sleepbuds would be ideal for napping on a plane or train.)

The buds didn’t mask everything, but they took care of random street noises and the baby next door quite well

The buds were also perfectly comfortable to wear. During the test period, I wore them for about six to seven hours a night, with the sound constantly on (you can also set them to shut off after a certain number of minutes or hours) and found that they went from 100 percent to 40–45 percent power during that time. So using them at night, and then charging them during the day, works very well.

Judging from my experience and what I’ve read about the first set of Sleepbuds, these are definitely an improvement over their predecessors. (There was at least one report of the new model burning and discoloring, but the defective unit was apparently exchanged and no further problems were reported.)

There’s only one more question to ask: are they worth the price? That depends. If you have real problems sleeping because of environmental noise or even tension, it might be worth it to pay $250 for a pair of earbuds whose only purpose is to help you sleep. (Of course, if your sleeplessness is due to medical issues such as sleep apnea, a doctor’s visit is probably in order.) The effectiveness of Bose’s Sleepbuds II is probably very personal. They may work well for some people and less so for others. In my case, they did improve my sleep somewhat, for which I was grateful — but whether they’d be worth the investment is something I’d have to consider.

To start using the Bose Sleepbuds II, you’ll need to agree to the following:

That’s four mandatory agreements and three optional agreements to use the Sleepbuds II.