A great gaming rig and an okay laptop

If you’re looking for the absolute most powerful gaming hardware out there... well, you don’t want the Asus ROG Strix Scar 15. You want a desktop or a laptop that weighs seven pounds, requires multiple power bricks, and is basically a desktop. But if you still want something you can realistically carry around, the Strix is about as powerful as it gets.

We’ve reviewed a number of Asus laptops this year that are members of the ROG Zephyrus gaming line — powerful, while still portable and attractive. You’d buy a Zephyrus if you want decent gaming results but also want an everyday work machine you could bring into the office or class. The Strix line eschews the latter role. These are gaming laptops. They are just for games. They’re not cheap, they’re not subtle, and they hold nothing back.

That’s where the Strix Scar 15 stands out. Every aspect is designed with the gaming enthusiast in mind, and there are a number of unique features for those customers. Of course, those also come with a few trade-offs — and folks who might need to use their machine for tasks besides gaming should consider other options. 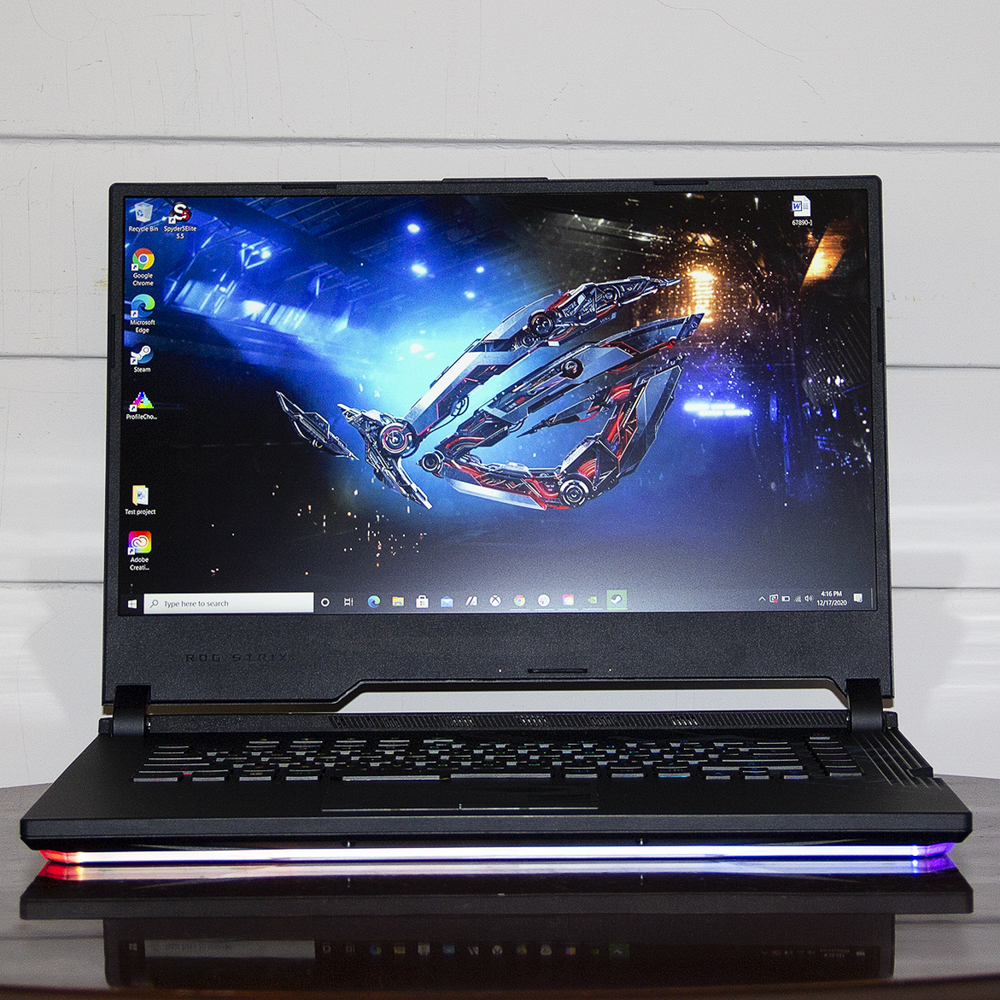 If you clicked on this review, you’re probably most curious about the frame rates this laptop is putting up. Suffice to say: they’re good.

On CS:GO at maximum settings, the Strix Scar averaged 248fps. Thanks to this model’s 300Hz screen, the chips aren’t just rendering 248fps; you’re actually seeing 248fps. You’ll see a frame rate difference between this system and an identical one with a 240Hz display, albeit a small one. (But to folks who play a lot of esports and first-person shooters, a small difference can matter.)

Overall, CS:GO was a smooth experience. The Scar only dipped below 100fps once when I was running through a thick flurry of dust.

Not all titles are able to take full advantage of the 300Hz screen, unless you plan on bumping the quality settings down. The Strix put up 67fps on Shadow of the Tomb Raider’s highest settings with ray tracing on Ultra. On Red Dead Redemption II (one of the most demanding games out there) cranked up to Ultra, the Scar averaged 54fps. Both games were quite playable on those settings, without any stuttering or slowdown. Those results are right on par with the MSI GE66 Raider (which put up 50fps on Red Dead and 70fps on Tomb Raider) and beat the smaller Zephyrus G14 by a significant margin.

It’s worth noting that while I was letting the Scar rip in Turbo mode (the highest power profile available) the 10980HK got quite hot throughout my gaming session, spending a chunk of time in the mid-90s and even hitting 99 degrees Celsius a couple of times. When I swapped to the regular Performance profile, the CPU spent more time in the mid-high 80s, and I only saw a 1-2fps difference as a result. So if you’re worried about frying your hardware, you won’t miss much if you stay on the Performance profile.

The 10980HK got quite hot throughout my gaming session

Moving on to other laptop stuff. Apart from its chips, what distinguishes the Strix Scar 15 as a gaming laptop is the design. It features a customizable per-key RGB keyboard, a luminous logo on the lid, and a bright LED strip around the front three sides. A glowing strip may seem obnoxious, but this one is actually more subdued than strips you may have seen on gaming rigs like MSI’s GE66 Raider. It wraps around the underside of the deck, so you don’t see it full-on; the effect is less garish gamer than the GE66 Raider and more fancy nightclub. (You can turn all of the RGB stuff off, of course. But then, what’s the point?)

Another cool thing is the deck design, which is printed with what Asus calls “Cybertext.” Basically, Republic of Gamers is written all over it in an urban-chic sort of font. It’s subtle and far from distracting, but it gives the whole product a subtle sci-fi vibe.

Speaking of the keyboard deck: the palm rests are coated in a unique “soft-touch paint.” It’s much smoother than your typical palm rest (you can very much feel the difference when you touch the rest of the chassis) and is quite nice to lay your hands on.

Asus keyboards are often among my favorites, and the Strix Scar’s keyboard is no exception. I love typing on this. I feel like my fingers are flying while using it. There’s a satisfying click with very little resistance. And I especially appreciate the convenient row of hotkeys at the top, which includes volume controls, a microphone mute, one that changes the performance profile, and another button that brings up Armoury Crate (Asus’ app where you can adjust various settings and features).

You have a good port selection at your disposal

If you’d rather plug in your own peripherals, you have a good port selection at your disposal. There are three USB 3.2 Gen 1 Type-A ports and an audio jack on the left side, while the back houses one USB 3.2 Gen 2 Type-C port (which supports DisplayPort, but not PD charging), the charging port, one LAN RJ-45, and one HDMI 2.0. That’s most of what you’ll need but there’s one glaring omission: Thunderbolt. Plenty of people may not care about this, but it’s a port I’m disappointed not to see on a $2,799 laptop.

On the right side is a Keystone II reader. A Keystone II is a physical key on which you can save personal settings. You can also use it to access a private storage space, which Asus refers to as a “shadow drive.” This can be encrypted if you have Windows 10 Pro. (Only this model ships with that operating system. You’ll need to upgrade from Windows 10 Home if you buy the base configuration.)

The Keystone II is a neat idea considering how many settings and profiles there are to keep track of on the Strix. In the ROG app GameVisual, you can choose between color presets for different types of games (FPS mode enhances brightness and contrast, RPG mode prioritizes vivid colors, etc.). In Aura Creator, you can customize your keyboard’s colors and animation. In GameFirst VI, you can prioritize bandwidth between the programs you have running; there are presets like Gaming First, Live Streaming First, and Multimedia First.

The Keystone II is a neat idea

One more thing I like: the speakers. Music sounded great, with a nice surround quality. The Strix won’t replace a good external speaker and percussion was a bit tinny. But vocals were quite clear, and at maximum volume, I never heard distortion. The laptop’s fans get quite loud during gaming, but I had no trouble hearing my games’ audio over them. (You can also switch to the Silent profile if the whine is bothering you.)

There’s lots of good stuff on the Strix, as you can see. But there are trade-offs, too. Most of them aren’t super relevant to gaming (and thus, forgivable on a laptop like the Strix), but they’re worth bearing in mind nonetheless.

For one: there’s no webcam. It’s not a deal-breaker — streamers will be using their own equipment anyway — but it’s a big minus for anyone who would otherwise use the Strix for an occasional work meeting or virtual catch-up with friends.

I also have a couple of issues with the trackpad. It has discrete clickers, which require a bit more skittering around to press than integrated buttons. I like these particular clickers more than most, but they’re still easy to miss and I sometimes found myself whacking chassis when trying to click. Generally, I found it less responsive and less accurate than I wanted it to be. Occasionally, it thought I was clicking when I wasn’t, causing me to accidentally drag things everywhere.

The touchpad also has a nifty feature where it can morph into an LED number pad if you press an integrated NumLock button in the top-right corner — but I hit this button with my palm while typing and accidentally activated the Numpad several times. Unlike with Asus’ ZenBooks that also have this feature, you can’t navigate with the touchpad while the Numpad is up, so I kept having to interrupt my workflow to deactivate it. (You can disable the touchpad itself with F10, but there’s not an easy way to disable the NumPad without disabling the touchpad.)

The biggest downside, though, is battery life. I averaged two hours and 28 minutes of sustained multitasking and office work with the Strix on the Battery Saver profile with the screen around 200 nits of brightness. (With all the battery-saving features off and a slightly heavier load, I got as low as one hour.) The Strix is a gaming laptop, so I wasn’t expecting hours upon hours of juice. Still, plenty of competitors do better: The MSI GE66 Raider (also powering an LED strip and RGB keyboard) made it through four hours of that same workload.

As with other Windows 10 computers, the Asus ROG Strix Scar 15 presents you with multiple things to agree to or decline upon setup.

Gaming on battery is possible, but not great. Red Dead ran mostly in the high teens and low 20s. I got an hour and 15 minutes of the game on a charge, but I started to see stuttering when the Strix was down to 60 percent (about half an hour in) and the game became unplayable at 10 percent. Realistically, if you plan on bringing the Scar anywhere, you’ll need to bring the massive 280W adapter and spend some time charging the device. (It took 45 minutes to charge up to 60 percent during very light Chrome use.)

Overall, these nitpicks emphasize Asus’ priority with the Scar. It’s not a laptop that’s meant to double as a travel companion or a work-from-home driver — don’t buy it to be your primary PC.

But that doesn’t mean the Scar isn’t great at what it’s supposed to be great at, which is gaming. Its results are on par with those of the best 15-inch rigs on the market, and it offers useful customization software with a unique colorful design to boot. If you need the best frame rates and the fastest screen, the Strix Scar 15 is a fine purchase.

Photos by Monica Chin / The Verge