The OnePlus Nord N10 5G does something unique: bring 5G to a $299.99 phone without cutting too many corners. That’s a full $200 lower than other budget-oriented competitors like the Google Pixel 4A 5G and Samsung Galaxy A51 5G. Alongside its lower-tier N100 sibling, it’s the first phone in OnePlus’ midrange Nord series to arrive in the US, available from T-Mobile, Metro by T-Mobile, and unlocked from OnePlus.com and other retailers.

It’s definitely noteworthy that the N10 5G will bring 5G to the under-$300 market. But at least for now, 5G isn’t something most people should care about, much less pay more for. Fortunately, the N10 5G has more going for it. It has a big screen with a high refresh rate, a tall aspect ratio that might make it easier for people with smaller hands to use, and OnePlus’ light-touch take on Android.

So what sacrifices did OnePlus make to create a $300 phone? The quick version is this: it offers an LCD rather than an OLED screen, uses a less robust processor than midrange and flagship phones, and doesn’t include any water resistance. And you won’t find features that are becoming more common on midrange devices, like wireless charging and telephoto cameras.

The question for the N10 5G is whether you’d be happy with a decent all-around device that doesn’t shine in any particular area, or if you should look to one of its budget competitors that goes all in on a feature like battery life or photo quality. 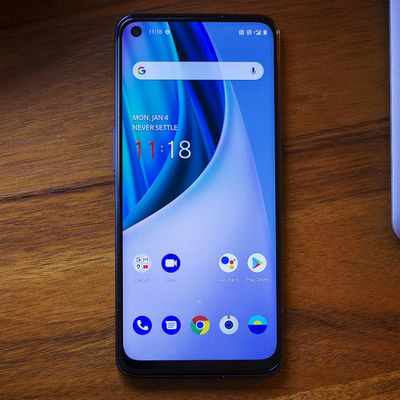 Fast charger in the box

As you’d expect from a $300 phone, the rear of the device is plastic — a glossy, smudge-attracting panel. The phone itself feels appropriately weighty and while it doesn’t scream ‘flagship’ it doesn’t feel too cheap either. I actually kind of like the plastic finish; I feel like it’s a little easier to grip and not as prone to slipping as glass. There’s a fingerprint sensor on the back that was quick and reliable in my testing. Overall, it was pretty comfortable to hold and use, despite what its dimensions initially suggested to me.

Somewhat unusually, the N10 5G offers a very tall 20:9 aspect ratio on its screen. It’s a 6.49-inch, 1080 x 2400 LCD, which makes for a device with a generous screen that doesn’t feel too bulky in your hand. Personally I like a small phone, but this felt like a bigger phone I could actually use. I don’t feel like I’m straining to like an Instagram post when I hold it in one hand. It’s a tight fit in my coat pocket but I could live with it.

This screen offers a 90Hz refresh rate that’s faster than the 60Hz typically seen at this price point. This makes for smooth scrolling through apps and makes the phone that bit nicer to use than you might expect for $300. However, the screen does use LCD technology, which lacks the rich contrast of OLED panels you’ll find in many competitors that cost just a little more. It’s good enough in day-to-day use, and it’s viewable in direct sunlight, but it’s not your best option if you watch a lot of dimly lit period dramas on your phone.

The N10 uses a Snapdragon 690 5G processor, one of Qualcomm’s budget 6-series chips, which includes support for the phone’s headline feature: 5G. It’s worth noting that the 690 supports low and mid-band 5G frequencies, but doesn’t offer mmWave connectivity (that’s the super-fast but hard to find variety of 5G). This is also a good time to remind you not to buy a new phone just for 5G. But if you must, be sure to check your carrier’s coverage map before you opt for this or any other 5G phone, and temper your expectations.

OnePlus has said it will update the N10 5G to Android 11, but that’s it for major updates

The N10 5G ships with Android 10, which is one version behind the very latest update. OnePlus has said it will give the N10 and N100 an update to Android 11, but that’s it for major updates — users will have to settle for two years of security updates. That’s not uncommon at this price point, but it’s an important point to consider. If you plan to pay for it in installments and upgrade within a couple of years anyway, that’s no great loss. If you’d rather get a few solid years out of your device, then the N10 won’t be your best option.

OnePlus’ Oxygen OS brings a fairly clean implementation of Android to the N10 5G. You can customize the font and theme, and choose between full gesture control or a navigation bar with fixed controls for home, back and recents. It’s not the pure experience of a Pixel phone, but it doesn’t feel overly cluttered for my taste. I don’t love the OnePlus-themed clock widget on the home screen by default, but it’s mercifully removable, as are the handful of OnePlus-specific apps like Community that I’m not sure I would use.

You can’t build a $300 phone without making some compromises, and a cheaper processor is one way to do that. The Snapdragon 690 at the heart of the N10 is a newer chip for budget devices, and in my use it turned in decent performance. Occasionally I noticed it stuttering when I scrolled quickly past some very image and video-rich screens, and the camera app sometimes took a few seconds to open. In the camera app itself I saw some slowdowns in the image preview when panning quickly.

But for the most part I streamed videos, used Google Maps, played games, ordered coffee, and scrolled through Instagram without issue. Speed is definitely one area where OnePlus had to make some concessions, and though performance lagged noticeably at times, I wouldn’t call it a deal-breaker for most people who would consider the N10 5G.

The N10 5G is configured with 6GB of RAM and 128GB of storage with a MicroSDXC slot for even more space. All three of those specs are more generous than many comparable devices at this price point, and for some may offset the relative pain of the slow processor. Dual speakers provide stereo sound for videos, but audio quality isn’t great. Wired headphones are an option, though, since the N10 5G includes a real, live headphone jack. (OnePlus aficionados should be aware that there’s no ringer switch here, however.)

The N10 5G isn’t all about battery the way the battery-for-days N100 and Moto G Power are, but its 4,300mAh battery delivers a solid day’s worth of use — and often more than that. I usually got about a day and a half of moderate use out of a full charge. OnePlus includes a 30W fast charger in the box, which is also uncommon at this price point, and it is truly fast: it took the device from 7% to 50% in 20 minutes in my experience.

You’ll find four cameras (plus a flash) on the N10 5G’s rear camera bump. Here’s a quick rundown of the phone’s cameras:

This seems like a lot of cameras, especially since two of them are unlikely to be used frequently. The monochrome camera only kicks in when shooting in black and white, which is accessed by scrolling through the filter options to the very last one. Likewise, the macro camera is activated via the main shooting screen by tapping the flower icon. It’s sort of fun to mess around with, but even in decent lighting image quality is pretty bad. Images from the ultrawide camera are a bit soft if you look closely, but it’s not noticeable enough to ruin an Instagram post.

The good news is that the main camera is just fine in decent lighting — good, even, considering this is a $300 phone. Colors are on the punchy side without straying into oversaturation, and detail is mostly acceptable in even moderately low light conditions like a well-lit interior. Things get a little noisy and smudgy in low light, but the 64-megapixel sensor (which kicks out 16-megapixel images) does a nice job of hanging on to at least some detail. Nightscape mode does bring back an impressive amount of light in darker situations, but you can’t get away with shooting in near darkness like you can with the Pixel’s Night Mode.

I did find that it struggled to find focus at times, and it’s definitely not up to the task of capturing moving subjects in low light, like pets and children. It also lacks a true telephoto camera, and will instead use digital zoom if you switch to the tele setting on the main shooting screen. Resulting images are very soft and have an unpleasant, overprocessed digital look about them.

Overall, it’s a camera that doesn’t try to do too much, which is a good thing. If you mostly photograph static scenes and don’t push it too hard, you can expect images that will look just fine on social media. But if you’re looking for any kind of modest zoom or top-notch performance in low light, you’d best look elsewhere.

Bottom line: this is a very cheap 5G phone with a big screen and decent all-around performance. OnePlus has made some smart sacrifices to get to that $300 price point, and the result is a device with many nice attributes but without a major standout feature. If there’s a particular feature that you prioritize on your phone, like multi-day battery life or an above-average camera, then you can do better around the same price or a little more.

If you want a very inexpensive 5G phone that doesn’t have any deal-breaking flaws, the N10 5G is it

If you can live without 5G for now (and we think you probably can!) you can get a phone with a little something extra for around the same price. For big battery life you could look to the N100 or Moto G Power. For an above average camera, look at the Google Pixel 4a. That phone is also a good candidate if device longevity or better performance are important to you.

If you want a very inexpensive 5G phone that doesn’t have any deal-breaking flaws, the N10 5G is it. Even if you’re not interested in 5G, which most people probably aren’t, this $300 device still delivers in important ways: a good screen, acceptable performance, a good enough camera, and decent battery life. Not a bad deal at all.