There are two reasons to buy the ExpertBook B9450: the weight and the battery life.

Pick up the Asus ExpertBook B9450, and you’ll wonder where the rest of it is. Asus is touting it as the world’s lightest 14-inch commercial laptop, and it is light. Carrying it around, I felt like I was carrying nothing. My test unit is 2.19 pounds, but models go as low as 1.91 pounds.

But the ExpertBook’s battery life is just as (if not more) impressive than its weight. In my testing, it lasted an average of 10 hours and 47 minutes — and that was while multitasking with a decent load of Chrome tabs and apps at 200 nits of brightness. That means the ExpertBook isn’t the longest-lasting business laptop I’ve ever tested (the $3,000 Dell Latitude still holds that crown), but it’s certainly in the hall of fame.

Our review of Asus ExpertBook B9450 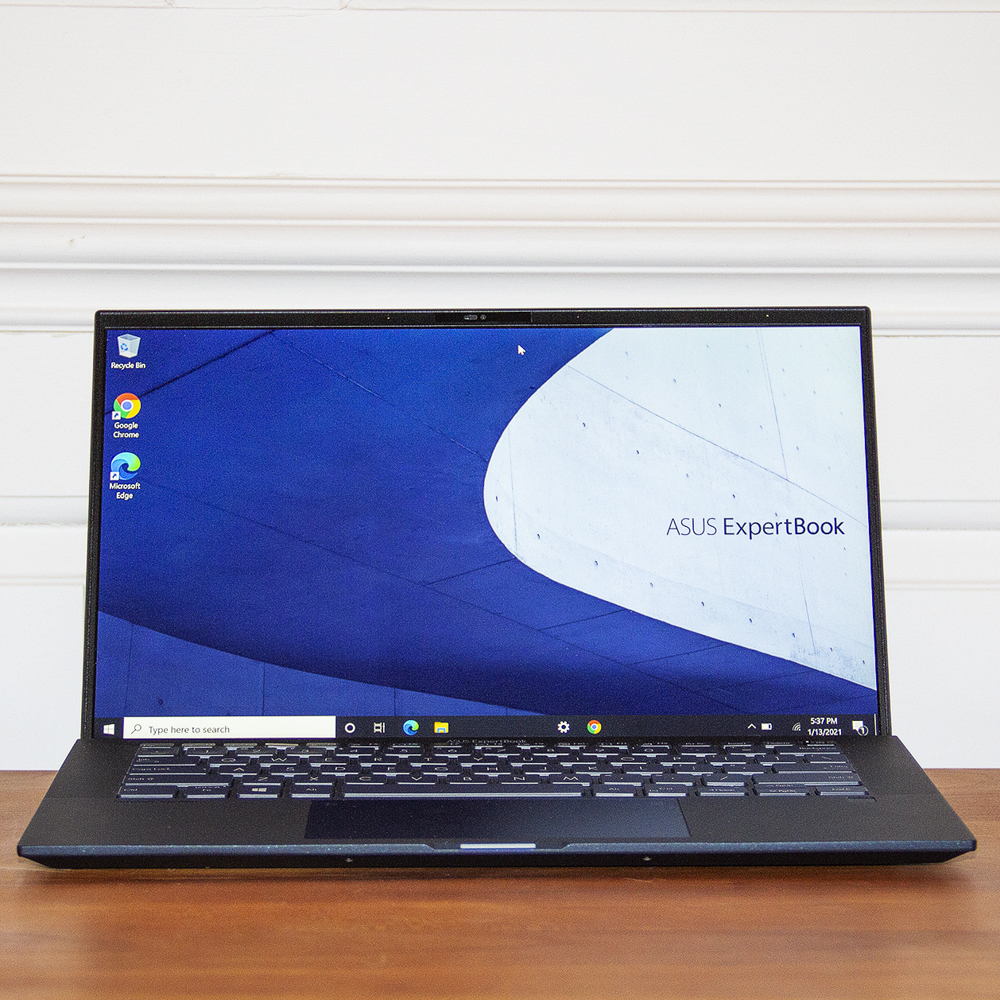 That’s my quick take on the ExpertBook. Those are the two standout features (in addition to the storage capacity). Together, they make it a great option for business users who need a portable device with quite a bit of storage, but potential buyers should be aware that the processor is mostly suitable for basic office tasks. More on that in a bit.

A problem with laptops this thin and light is that they sometimes feel flimsy. The ExpertBook is surprisingly sturdy, though; it’s made with multiple layers of a magnesium-lithium alloy material that Asus says is 17 percent less dense than “conventional” magnesium-aluminum alloy. The company also says the B9450 has passed MIL-STD 810G military-grade standards, which tests various factors like port durability, spill resistance, and shock resistance. I’d believe it. While I did feel a bit of flex in the keyboard deck and screen, it was nothing compared to what I’ve seen from other ultrathin units like the Vaio SX12.

Durability aside, the ExpertBook feels very high quality. There are metallic flecks in the finish, which give the whole thing a bit of a celestial look in certain light.

One note with the design: like a number of Asus laptops, the ExpertBook has an ErgoLift hinge, which means the display folds under the keyboard deck when you open the laptop and lifts it a bit off the ground. This has a number of benefits — it’s supposed to increase cooling and make typing more comfortable — but it also means that if you’re using the ExpertBook on your lap, you’ll have a sharp hinge digging into your legs. I know not everyone spends as much time on the couch as I do, so your mileage may vary.

The final impressive thing is the useful port selection: you’ve got two Thunderbolt 3 USB-C ports, one USB 3.2 Gen 2 Type-A port, one HDMI 2.0 port, one Micro HDMI to LAN port, and one 3.5mm combo audio jack. Plenty of manufacturers have had trouble fitting even USB-A onto ultrathin machines, so I’m impressed to see a full-sized HDMI here.

Other fun stuff: there’s a fingerprint scanner below the arrow keys, the Windows Hello webcam has both a physical shutter and a kill switch, and the touchpad has Asus’ NumberPad 2.0 feature, which allows you to pull up an LED numpad with the touch of a sensor. And there are a number of business-specific features, including a TPM 2.0 chip and a preloaded suite called Asus Business Manager where you can encrypt your local drives, toggle system registry editing, and customize various other stuff.

All this sounds great, so what’s the catch? There’s really only one, but it’s one that will matter to plenty of people. It’s the processor. The Core i7-10510U is a four-core processor that’s significantly lower-powered than the chips you’ll see in the best laptops on the market like the Dell XPS 13. It’s far from a workhorse.

AGREE TO CONTINUE: Asus ExpertBook B9450

To use the Asus ExpertBook B9450 you have to agree to:

That’s five mandatory agreements and 15 optional ones to use the Asus ExpertBook B9450.

If you think you’ll need to do strenuous work on this, you’ll want to look elsewhere

Now, the ExpertBook is just fine for basic office work — emails, Google Docs, Slack, Zoom calls, that sort of thing. I never heard the fans spin up during my regular Chrome multitasking, nor did I experience any performance issues. If this is what you do all day, great — the ExpertBook is for you. But if you think you’ll ever need to do strenuous work on this, especially tasks that leverage the integrated graphics, you’ll want to look elsewhere.

I tried to run our traditional video export test in Adobe Premiere Pro to illustrate the performance difference between this model and other ultraportables you can buy, but the program crashed during each trial. I let Asus know about this, and it’s looking into it.

So I ended up running some light games instead. The ExpertBook ran Rocket League on maximum settings at 40fps (where the 11th Gen XPS 13 with a Core i7 i7-1165G7 put up 111fps, and the 10th Gen XPS 13 with a Core i7-1065G7 put up 70fps). On League of Legends, it averaged 85fps (to the 11th Gen XPS’s 205fps and the 10th Gen’s 160fps). It averaged 31fps on Overwatch’s Ultra settings and 10fps on the lowest Shadow of the Tomb Raider (which I ran mostly out of curiosity). Those frame rates are considerably below what you can expect from both XPS models, as well as plenty of much more affordable 14-inchers like Asus’ own ZenBook 14.

Asus ExpertBook B9450 specs (as reviewed)

To reiterate: The ExpertBook isn’t anything close to a gaming laptop. This is just to illustrate the processing power you’re sacrificing for the additional portability, battery life, and storage that the ExpertBook offers (and of course, to note that if you think you’ll ever want to play even casual games, think about getting something else).

One thing I want to commend Asus for, though: The ExpertBook’s cooling is great. During several Premiere export attempts and a long gaming session, the CPU’s temperature stayed very consistently in the high 60s and rarely jumped above 70 degrees Celsius. That’s impressive, especially for such a thin device. (The XPS 13 spends a lot of time in the high 90s.) On the other hand, the fans made so much noise that they were audible from multiple rooms over — people around me would have been alarmed if I tried these tests in an office. That’s another reason to steer clear of this if you’ll need to do gaming or media work from time to time.

The audience for the ExpertBook B9450 is somewhat specific. But that doesn’t mean it’s small. If you’re someone who doesn’t care much about processing power, but does care about portability, battery life, and storage, this laptop is worth the $1,799. Not only is it among the lightest you can buy at this size, but it’s one of few products in its weight class to feature dual storage slots. It’ll be difficult to find all three of those features in many other 14-inch laptops at this price point. Add nice build quality and the nifty numpad feature, and I imagine this is a laptop many at-home and on-the-go workers will be happy to have.

Just make sure you know what you’re getting — because the low-powered processor and deafening fans certainly aren’t ideal for everyone.