Step-up performance at the right price

If you’re looking for a gaming rig that’s a step above the budget price point but still more affordable than the flashiest PCs on the market, you’re looking for MSI’s Leopard line. With a starting price of $1,599 ($1,899 as tested), the 2021 GP66 Leopard takes the same top-end chips that are in the likes of MSI’s GE66 Raider and the Asus ROG Strix Scar 15 and puts them in a less exciting, more affordable chassis. In this case, that’s Intel’s eight-core Core i7-10870H and Nvidia’s brand-spanking-new RTX 3070 mobile graphics card — components you’ll also see in luxury gaming flagships across the board.

That’s the clear argument for the GP66. If you’re willing to make some compromises (particularly when it comes to the chassis and the battery life), you can get high-end gaming performance at a midrange price point. Thanks especially to the RTX 3070, these are some of the best frame rates you’ll find below $2,000.

The GP66 Leopard is a revamp of the 2019 GP65 Leopard. In addition to the RTX 3070, MSI made at least one other major change: its design. The changes are subtle, but they add up to a machine that looks a bit more professional and a bit less gamer-y.

Our review of MSI GP66 Leopard 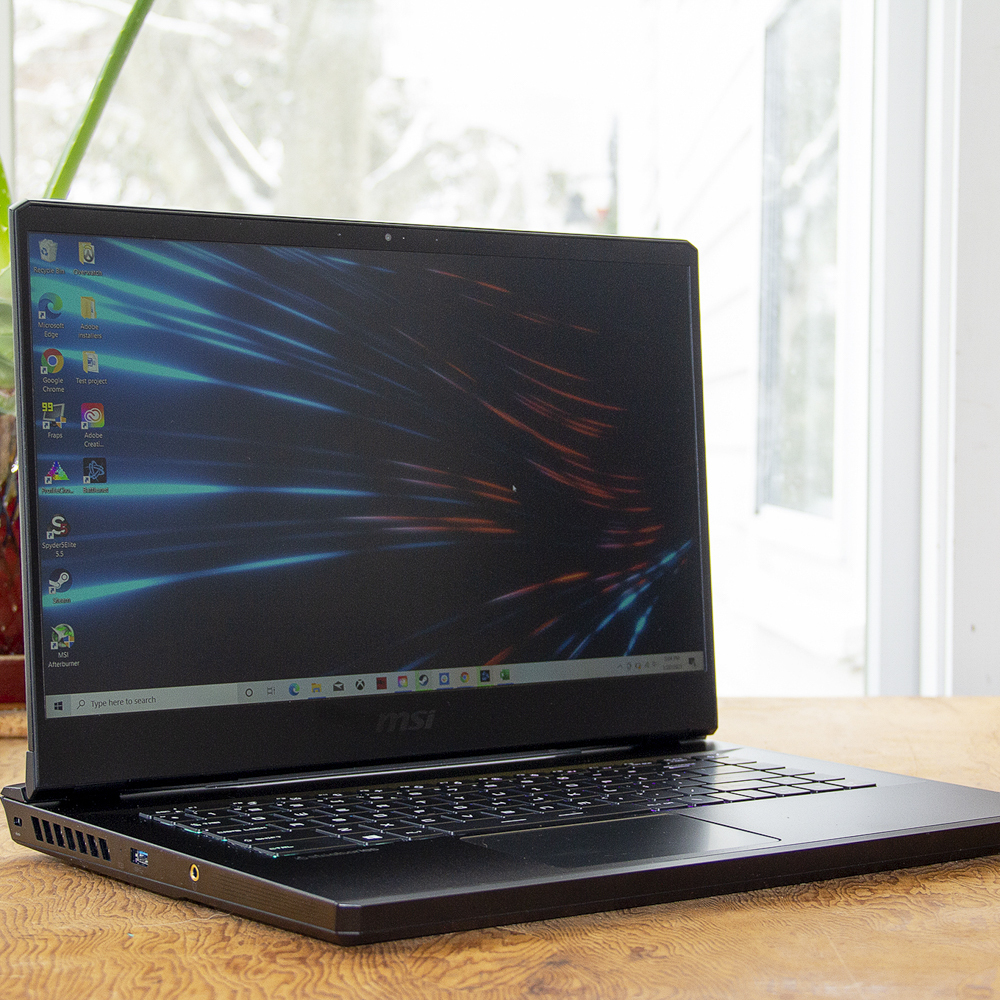 For one, the GP66 is noticeably thinner — it’s 0.92 inches thick, while its predecessor was 1.08 inches thick. There’s also a new hinge design, which leaves less visible space between the display and the keyboard deck and is meant to make the clamshell easier to open with one hand. MSI sent a dummy GP65 specifically to verify this claim, and I can confirm that the GP66 is much easier to open. The lid, which had a red MSI logo on the GP65, is all black on the GP66, and the two raised ridges in the center of the GP65 that gave the laptop a distinctively “gamer” look are gone.

But the keyboard deck is where the Leopard has matured the most. MSI eliminated the GP65’s stiff discrete clickers in favor of a smooth, modern touchpad. The keyboard keys, which looked and felt quite plasticky on the last model, have been upgraded to a wider design that more closely resembles those of the Razer Blade line. (Don’t worry: per-key RGB backlighting remains.) The clunky dedicated buttons the GP65 had for toggling the power and fan profiles are gone as well.

That doesn’t mean this is the best-made laptop around. The chassis has a bit of a plasticky feel compared to many more expensive models, and the touchpad wasn’t as smooth as I’d like — I often found my fingers skidding. But I’m happy with the revamp all the same. It’s a smoother, sleeker look — a Leopard for 2021.

One more design change: MSI moved a bunch of ports to the rear of the chassis. There’s one Type-C USB 3.2 Gen 2 with DP1.4, one HDMI 2.0, one RJ45, and one power port back there, in addition to a Type-A USB 3.2 and an audio combo jack on the left and two Type-A USB 3.2 on the right. That means the GP66 actually has fewer ports than its predecessor, which was able to fit in a miniDP 1.4, separate input and output audio jacks, and an SD card reader (though that reader was frustratingly slow according to reviewers). On the other hand, having so many ports crammed together on the sides of a device can make cable management a frustrating endeavor, so I’m glad that MSI has been able to spread them out. In particular, having USB-A ports on both sides is handy.

Let’s get into the second thing that’s new with this machine: the RTX 3070. This graphics card was unveiled at Nvidia’s CES 2021 keynote two weeks ago, along with the rest of the new RTX 3000 mobile line. Nvidia said the chip would deliver speeds up to 1.5 times faster than those of RTX 2070 systems. In my testing, the GP66 didn’t quite display that large of a bump on every title, but it wasn’t too far off.

To start using the MSI GP66 Leopard, you’ll need to agree to the following:

That’s seven mandatory agreements and 13 optional agreements to use the GP66 Leopard.

The TL;DR is that pretty much any game you want to play, you can play. All of the games here were tested at their highest possible settings, and none of them gave the RTX 3070 any trouble. The GP66 averaged 96fps on Horizon Zero Dawn; gameplay looked fantastic without a stutter to be seen. It averaged 75fps on the highly demanding Red Dead Redemption II, with a minimum of 55fps on the game’s built-in benchmark. Those are both significantly better results than we saw from MSI’s flagship GE66 Raider and Asus’ ROG Strix Scar 15, both of which use an RTX 2070 Super, and both of which cost several hundred dollars more for comparable specs. It’s also (unsurprisingly) a step up from MSI’s high-end GS66 Stealth that’s equipped with an RTX 2070 Super Max-Q.

Ray tracing was also no problem: the Leopard put up 82fps on Shadow of the Tomb Raider with the feature on its Ultra setting. The Raider and the Strix averaged 70fps and 67fps, respectively, on that title.

With esports titles, you can take full advantage of the 240Hz screen. The GP66 maxed out Rocket League (which goes up to 250fps) and averaged 169fps on Overwatch (where the Raider only averaged 124fps).

The Leopard employs MSI’s “Cooler Boost 5” system, which includes two fans and six heat pipes. Cooling was good throughout; the CPU never passed 88 degrees Celsius during gaming. I never heard the fans during my regular multitasking, but there was sometimes an annoying coil whine that swapping to the Silent Fan profile didn’t always eliminate.

While some gaming laptops can double as drivers for media work, the GP66 wouldn’t be a great choice for creative professionals because its screen maxes out at 205 nits. That’s dim, even for a mid-tier gaming laptop. The system also wasn’t quite as dominant in Premiere Pro as it was in gaming — it took five minutes and 21 seconds to export a five-minute, 33-second video that the GS66 Stealth completed in three minutes and 14 seconds. On the bright(er) side, the GP66’s display does cover 100 percent of the sRGB gamut and 80 percent of AdobeRGB, which means your games should look nice and vibrant.

When it came to regular multitasking and office work, I didn’t experience any performance issues with the GP66. I ran into a number of bugs with the last MSI product I reviewed, the GE66 Raider, but I’m happy to report that they all seem to have been fixed. The Dragon Center app (where you can swap fan profiles and customize other settings) was so crash-prone and glitchy when I used it last October that MSI had to tap into my review unit and troubleshoot, but it’s quite smooth and responsive now. I’ve also previously had some trouble with the SteelSeries engine, where you customize keyboard colors and effects, but it was easy to use here.

Battery life, though, is a major area where the GP66 isn’t ahead of its competition. I was averaging three and a half to four hours from the four-cell, 65Wh brick, with consistent multitasking in around a dozen Chrome tabs with the screen at 200 nits of brightness. That’s not great news for anyone who was hoping to work on the go, especially considering how heavy the 230W charger is to carry around. This unit also came preloaded with Norton Antivirus, which can drain power, so make sure to uninstall that if you want the longest possible life span. (Premiere Pro results also improved significantly after I nuked Norton.)

Finally, on sound. The GP66 includes two 2-watt speakers. As is usually the case with laptop speakers, treble tones were much stronger than the middle ranges, while bass and percussion were subdued. Game audio was fine with a decent surround quality — but not the best I’ve ever heard and not as good as you’d get from a decent external speaker.

The GP66 also comes preloaded with Nahimic customization software, which lets you swap between audio presets for Music, Movie, Communication, and Gaming, and manually adjust equalizer settings. There’s a “Surround Sound” feature you can turn on and off (I didn’t notice a huge difference), and a “Volume Stabilizer” that’s supposed to keep your audio audible without waking people up (this did change the sound, though I wasn’t able to test its efficacy on any sleeping roommates). You can also customize the built-in microphones for conferences and chats — there are toggles for echo cancellation, static noise suppression, and the like.

The GP66 Leopard isn’t a perfect laptop. Between the plasticky texture, the skid-prone touchpad, the dim screen, and the preloaded bloatware, it’s clear where MSI has had to cut some corners. And while I certainly enjoy the modest all-black chassis, gamers who need RGB lights everywhere may still prefer the likes of the Raider and the Strix.

But the Leopard excels in the area that matters most: game performance. Not only does it blow budget competitors like the Lenovo Legion 5i out of the water, but thanks to the new RTX 3070 it’s a significant step up from today’s luxury gaming laptops while remaining a large step down in price. With a powerful new chip and a fresh modern design, the GP66 Leopard is an excellent new product to kick off 2021.