Other laptops with the RTX 3070 perform nearly as well

I had hoped that MSI’s GS66 Stealth for 2021 would look and feel a little different than last year’s model — not that the 2020 version was particularly busted in any major way. In fact, the previous model was a few nips and tucks shy of reaching Razer’s high bar for gaming laptop design. But while the outside shell of this year’s model is exactly the same as last year’s, I can live with that because what’s inside is mostly all-new.

The review unit we tested is the current pinnacle of mobile graphics tech: Nvidia’s new RTX 3080 Max-Q graphics chip, with 16GB of video memory (Nvidia also makes an 8GB variant). MSI also added a gorgeous canvas of a display: a 15.6-inch 1440p (QHD) IPS G-Sync screen with a fast 240Hz refresh rate. The price for this configuration will be $2,599 when it releases in June.

The other specs are good, too, but not necessarily cutting-edge. It has 16GB of RAM, a 1TB NVMe SSD, and the same big, four-cell 99.99Wh battery that was in the previous iteration. It is equipped with an Intel Core i7-10870H processor, which on paper is a slight step down compared to the Core i7-10875H in the previous model I tested, but I didn’t notice a difference in performance. 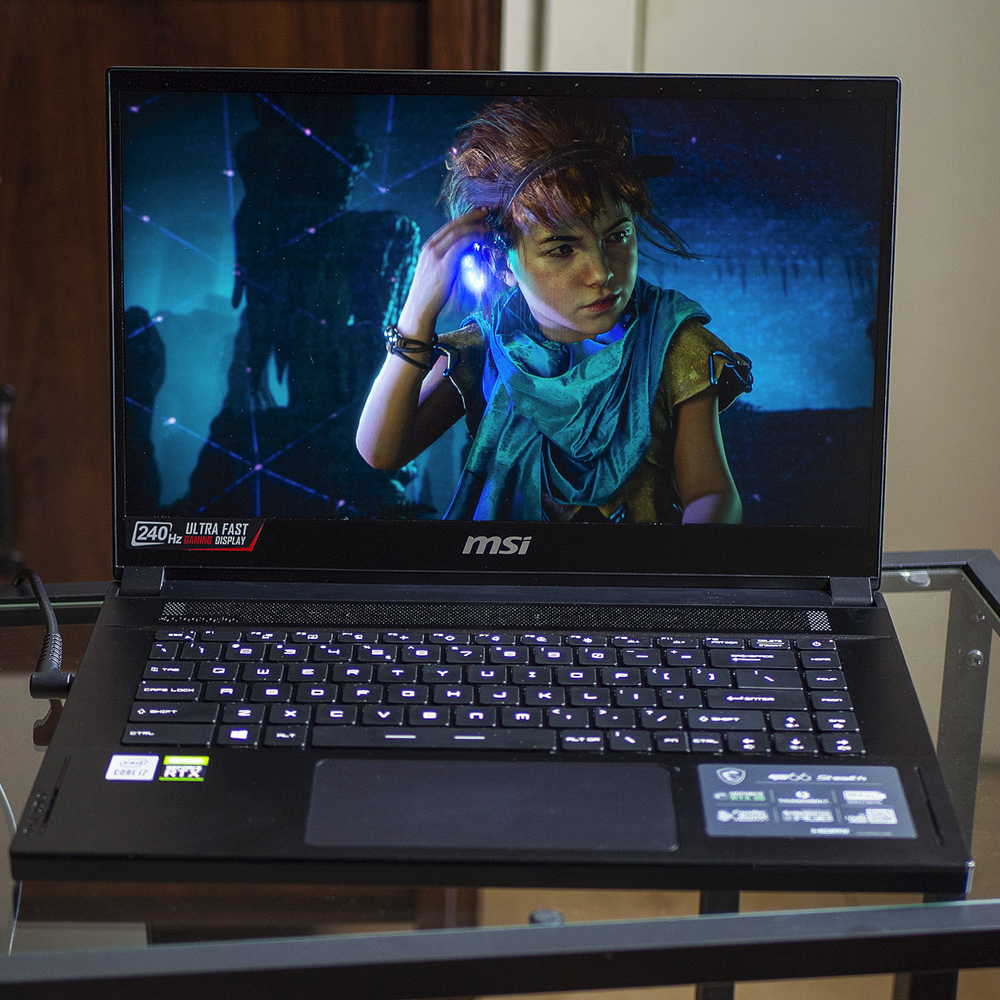 The original first-look at this laptop focused on how good it was at playing games at QHD resolution. Since then, our team has reviewed several other laptops that feature Nvidia’s latest generation of RTX 30-series graphics cards, as well as a few that have QHD screens, too. In that time, we’ve agreed that the RTX 3070, the next notch down on the totem pole of Nvidia’s latest graphics card lineup, is better at QHD gaming than we expected. The Razer Blade 15 Base and Asus’ ROG Zephyrus G15 are two key examples.

If it’s confusing to fathom how a lesser GPU could come close to outpacing what’s supposed to be a much better performer, it’s mostly about the thickness of a laptop. Those two examples are a little thicker than the GS66 Stealth and have a similar or higher amount of power level allotted to their GPUs set to a similar or higher boost clock speed. As we saw, that can result in comparable performance, despite costing hundreds of dollars less than this.

On the other side of that coin, the RTX 3080, like the one you’ll find in this laptop, is good at getting you a few extra frames per second over that. But most gamers, especially ones who are trying to save money when possible, will likely still be happy with the performance of a more affordable laptop. MSI makes cheaper variants of the GS66 Stealth that I’ve listed below, but for now, it’s limiting its use of a gorgeous QHD screen for just this high-end model. That’s a disappointment, since other companies like Razer and Asus are including them in more budget-conscious gaming laptops with performance that isn’t too far off from this model.

Back to the specs, this year’s GS66 Stealth makes the jump up to Wi-Fi 6E compatibility and Bluetooth 5.2. This laptop has an HDMI 2.0 port, so it’s limited to outputting 4K resolution at up to 60 frames per second. Of the things MSI updated in this year’s GS66, the HDMI port should have been a little higher on the list than Wi-Fi 6E. Several other models we’ve reviewed feature HDMI 2.1, allowing 4K output with up to 120 frames per second to really take advantage of the hardware while connected to an external high refresh rate monitor.

General performance outside of gaming felt similarly snappy to last year’s model. A big stack of tabs in Microsoft Edge, alongside Slack and Spotify, didn’t slow this machine down. It didn’t perform nearly as well in our Adobe Premiere Pro export test, though. Tasked with exporting a five-minute, 33-second 4K video, the laptop took six minutes, 30 seconds, compared to the three-minute, 14-second export time that we got with last year’s model. The battery life can last for around three hours and change under a light load of applications. That’s less than the roughly five hours of screentime I was getting with last year’s model, but then again, this one has a QHD screen compared to FHD.

But the real question is: was Nvidia’s latest high-end graphics chip worth the wait — and can it keep up with a QHD display? The short answer is that, like my colleague Tom Warren saw on the desktop version of the RTX 3080, this mobile variant is a leap over what the last-gen RTX 2080 could provide. Since this is also the first generation of gaming laptops that offer QHD screens, it’s a little hard to compare the two, but there’s no question that games look better than before.

The RTX 3080 with 16GB of video memory is capable of running some of the most demanding games in QHD well beyond 60 frames per second — with all graphical settings adjusted to max and with ray tracing and other RTX settings activated, when applicable. That’s an incredible achievement. And if you’re someone who doesn’t always play the latest games as they are released, these specs will afford you even more headroom to power through your backlog, with a fantastic display to enjoy them on to boot. The IPS screen that MSI opted to use is rich with contrast and better viewing angles than I expected, and its G-Sync adaptive sync does a great job of keeping visuals free of artifacts.

I was able to spend time playing Horizon: Zero Dawn, Cyberpunk 2077, Death Stranding, Shadow of the Tomb Raider, and Control, most of which have ray tracing and / or DLSS (deep-learning super sampling) graphical options to take further advantage of this powerful graphics chip. Since Cyberpunk 2077, Death Stranding, and Control don’t ship with built-in benchmarking tests, I simply ran around a variety of locales to stress-test the hardware (the other games have scripted methods for gathering performance metrics).

As someone who’s used to playing games on a 1080p display, I was impressed to see such graphically intensive games run this fluidly, especially at a higher native resolution. However, we know now that this laptop isn’t the only machine on the market that can achieve beyond 60 frames per second in-game performance, and in most cases, you don’t even need an RTX 3080 to do it.

As I mentioned up top, the design of the 2021 GS66 Stealth is note-for-note the same as last year’s model. The overall look is stellar, though, and I wish every gaming laptop had a trackpad this generously large. It has backlit keys that can be programmed to dazzle with RGB splendor through SteelSeries software, but that’s really the only element that reveals this is a gaming laptop.

Well, aside from the very loud fans. I noted that last year’s model was relatively quiet, even under pressure. I’ve heard laptops louder than this new RTX 3080 version, but the decibel level went high enough so that at times I felt I needed headphones to hear all of the in-game details. Of course, that differed depending on the game. Cyberpunk 2077 made this laptop whir the loudest of the games I tested, while Control actually ran fairly quietly by comparison. But even when the GS66 Stealth is just idling during a browser, it’s audible.

I found other flaws with the design. The keyboard layout is still crowded, with the important function key placed awkwardly next to the control key, making it cumbersome to do simple tasks like adjust the volume and brightness. Also, the bottom of the laptop chassis still flexes in a slightly worrying way. I don’t think it’s liable to break under normal use, but for a pricey machine like this, the design doesn’t inspire confidence.

You can say yes or no to the following:

In total, that’s six mandatory agreements and 15 optional agreements to use the GS66 Stealth (2021).

Just like last year’s GS66 Stealth, this is an alluring package that delivers just about everything that I want in a gaming laptop. Its design is mature, and it has a generous amount of ports. Though, also like last year’s model, it has some flaws, like the over-crowded keyboard and some problem areas on the chassis that flex more than they should. The inclusion of a QHD screen with a capable GPU overshadows most of the issues, making this a stellar machine for gaming and watching movies.

This is one of the slimmest, yet most powerful laptops available, but it’s tough to recommend outright to most people when some less expensive models, like the Zephyrus G15 or the Razer Blade 15 Base can get you most of the way there in terms of gaming performance, at QHD resolution no less.

Update 2:09PM ET, March 24th: MSI has released the price for this laptop, so we’ve now added a score, as well as more context surrounding its performance and value compared to other gaming laptops that we’ve recently reviewed.