The Ace offers a large screen and massive battery, but it falls short in some key areas

Share All sharing options for: Motorola One 5G Ace review: a weak hand

The Motorola One 5G Ace is a $399.99 phone that does a somewhat convincing impression of a more expensive phone. It’s large, which feels like a flagship kind of thing, even if that’s not strictly true. It’s relatively heavy, which, in keeping with the wisdom of Jurassic Park’s unluckiest lawyer, means it’s probably expensive. It’s shiny. I held it up for a friend to look at it from six feet away, and he described it as “sleek, like an old iPhone.” And of course, there’s 5G, which was (until somewhat recently) reserved for premium devices.

It makes a great first impression, but once you look closer, you start to see where it lacks the polish of a high midrange or flagship phone. Its processor stumbles with heavy tasks, that big screen lacks the resolution or faster refresh rate commonly found on high-end devices, and its cameras can’t compete with the best. As is so often the case, you get what you pay for.

Though $400 is affordable by 5G phone standards, it’s still more expensive than quite good non-5G alternatives. The Ace is one or two hundred dollars more than other capable budget options — some of which even offer 5G, too. The question, as always, is what compromises did Motorola make to offer this phone at $400, and are those acceptable trade-offs for someone considering it?

Our review of Motorola One 5G Ace 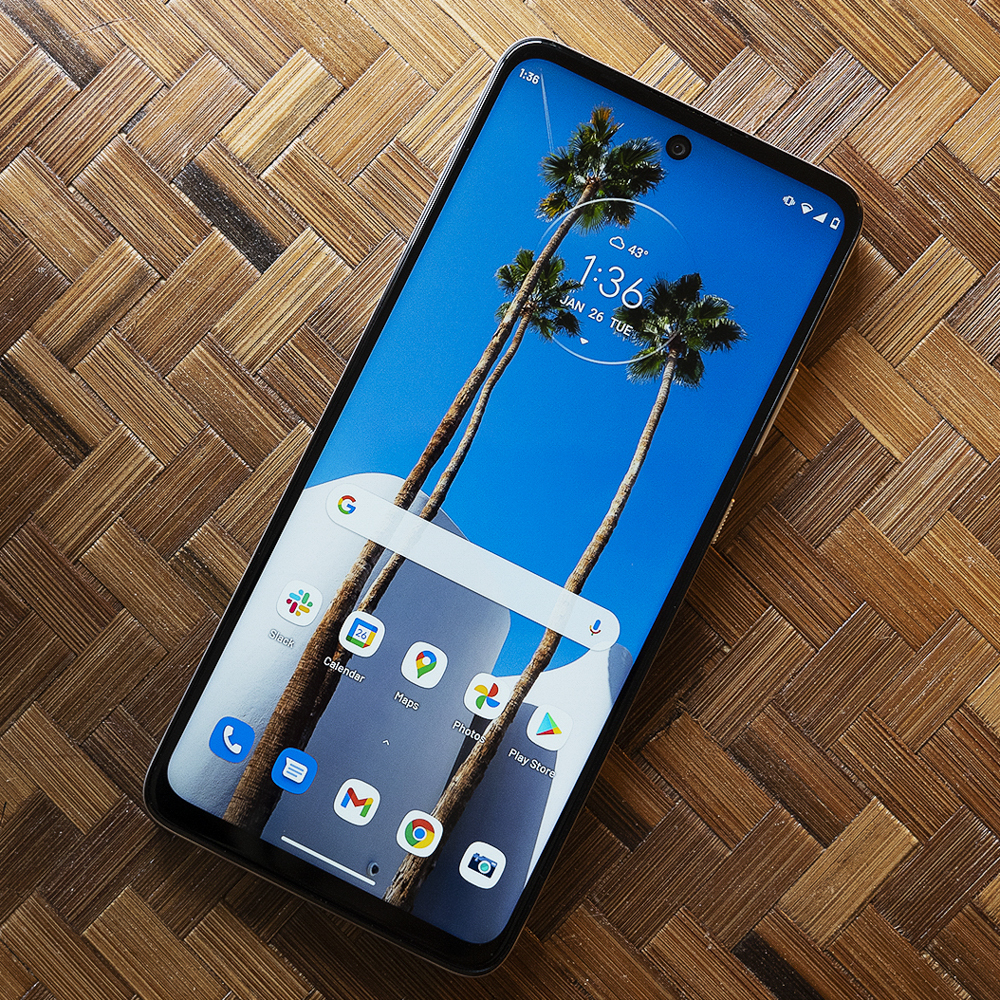 The One 5G Ace features a generous 6.7-inch screen. Depending on how you feel about big phones, that might be one of this device’s best selling points. Battery is another strength: the Ace is equipped with a 5,000mAh battery (likely a contributor to its big size), which is head and shoulders above the 4,000 or 4,500mAh capacity typical in budget and midrange phones.

The Ace is a large phone that makes itself known; you won’t forget it’s in your pocket, for example. It’s a hair taller and wider than the Galaxy S21 Ultra and 1mm thicker. It’s on the heavier side, too, at 212g, probably owing to the battery. I found its size a little awkward. It feels like a strain to reach my thumb across the screen with the phone in one hand. I also fumbled it a couple of times, picking it up too quickly and forgetting how much it weighs. This is very likely a Me Problem, though; my husband thinks it’s comfortable to hold one-handed.

The screen is a 1080 x 2400 LCD panel with a standard 60Hz refresh rate. It’s bright and viewable even in direct sunlight, but it lacks the nice contrast of OLED. Viewing it from slightly off angles results in a loss of contrast and slight color shift. Its resolution is stretched a bit thin on a screen this size, and if you’ve had higher-resolution phones before, you will probably notice it doesn’t look quite as crisp.

Likewise with refresh rate: quick scrolling motions and animations are just a little choppy, particularly if you’ve used a 90Hz or 120Hz screen. If you aren’t switching from a phone with better resolution or a faster refresh rate, you won’t feel like you’re missing out on anything, and you’ll probably just appreciate what is a very large, pleasant-to-use screen.

With moderate use, I generally got two days out of the Ace’s huge battery. Gaming or watching a lot of videos would cut that down, but it’s hard to imagine a real-world scenario where you wouldn’t get at least a day and then some on a full charge. A 15W fast-ish charger is included in the box.

The Ace uses a Qualcomm Snapdragon 750G 5G chipset. It had no problem handling my daily scrolling through Twitter and Instagram, and it generally felt pretty snappy cruising through Zillow and starting the camera. It struggles with certain heavier tasks, like using certain JavaScript features on a webpage (image sliders on this site, for example).

The Ace is offered with either 4GB of RAM / 64GB of storage or 6GB of RAM / 128GB storage, both of which are expandable via microSD card. I tested the 6GB of RAM variant. Overall, it feels like an appropriate amount of processing power for a $400 phone. The rear-mounted fingerprint scanner is quick and mask-friendly as a bonus, and the Ace includes a 3.5mm headphone jack.

Then there’s 5G. Worth noting: the Ace supports Sub-6GHz 5G only, which is the more widespread “nationwide” variety. We still have complicated feelings about the state of 5G in the US, but carriers are pouring resources into expanding and improving their existing 5G offerings. In that sense, choosing a phone that supports it now will mean your device is future-proofed for what 5G brings in the next couple of years. Don’t expect a night-and-day difference just yet, though.

Motorola has equipped the Ace with three rear-facing cameras: a 48-megapixel standard wide that kicks out 12-megapixel images, an 8-megapixel ultrawide, and a 2-megapixel macro camera. Around front, there’s a 16-megapixel selfie camera.

When it stays in its lane, the Ace is capable of very nice photos

Motorola also throws in a handful of useful software features. There’s an optional on-screen level, which I appreciate as a serial crooked photo-taker. You can opt for a very wide-format image using the main camera, turning the entire screen into a giant viewfinder, which is a fun creative exercise. There’s also a Pro mode if you want to take control of more settings. I didn’t use it much, partly because its insistence on displaying live Kelvin color temperature values stressed me out.

Like most others in this class, the Ace takes nice photos in good lighting conditions. I like its handling of color and white balance. Food looks appetizing, and it handles mixed lighting well. Overall, when it stays in its lane, the Ace is capable of very nice photos.

The Ace, unfortunately, does not always stay in its lane. Often, it tries to do too much with too little. In some high-contrast ultrawide shots, I saw a lot of noise where it tried to boost shadows — noticeable color noise like I haven’t seen since I was reviewing point-and-shoot cameras [redacted] years ago. Night Vision mode produces a very bright image that just looks strangely artificial and overcooked. Ultrawide photos in anything less than bright outdoor light look very smoothed-over from noise reduction.

There’s also some noticeable shutter lag, which would definitely bother someone trying to photograph a moving subject like a child. It was more of a minor annoyance in my particular use cases of sleeping cat and street scenes.

Even images taken in standard photo mode with the main camera look overworked with close inspection. The camera captures a good amount of detail, but sharpening can be aggressive and crunchy. A photo I took of the sunrise in my backyard was spoiled by some noticeable halo-ing around dark subjects in the foreground. If the Ace had just exposed for the sky and let shadows be, it would have been fine!

To be clear, it’s not a problem that a $400 phone can’t do all of the things the Ace is trying to do; it’s just that it probably shouldn’t try in the first place.

The Ace ships with Android 10, and an update to 11 has been promised. That’s the only major platform update you’ll get. Beyond that, Motorola will provide two years of security updates, up until January 2023. Motorola is, unfortunately, behind the curve by offering just one major update, even for a budget device.

Motorola’s take on Android includes customizable home screen fonts, icon shapes, and colors, along with a couple of annoying pre-downloaded apps that can be hidden but not uninstalled. I like Moto’s handling of lock screen notifications, or “peek notifications” as it calls them. They’re helpful without being intrusive.

“You get what you pay for” is an appropriate takeaway here, and I mean that in both a cautionary and a complimentary sense. Despite some resemblance, this isn’t a $1,000 phone, and you won’t get a $1,000 experience. But for $400, you should expect to get a phone that will get you through your day without giving you trouble. It should do the things you need it to do — even some things you want it to do — and it should see you through a couple of years at least.

The One 5G Ace meets all of those requirements, even though it does fall short of good midrange and high-end devices. Though capable, its processor can’t quite hang with the best of them. The camera is a little clumsy. The screen, while plenty big and bright, isn’t going to offer the rich viewing experience of a competing device with an OLED.

For now, the Ace doesn’t have much direct 5G-capable competition for $400, but that will change quickly. If you plan to hang on to your phone for the next couple of years, it does make sense to pick a 5G model now. For a bit more, the $460 Google Pixel 4A 5G offers a superior camera, a nicer screen, and a slightly better processor. Or you could save some money and get the $300 OnePlus Nord N10 5G with a 90Hz screen that’s almost as big and a better camera, though it offers a less powerful processor. If it’s an option, you could wait things out for a few months. More affordable 5G devices are on the way.

I don’t have a problem recommending the Motorola One 5G Ace if — and it’s an important if — a large screen and great battery are priorities for you above all else. But if you think you’ll want a better camera or a nicer screen, it would be best to look elsewhere.

To actually use the Motorola One 5G Ace, you must agree to: