Perfection, for a price

I have used a heck of a lot of laptops in the past year, and some of them are quite nice. MacBooks have nailed the “premium” look and feel for years, and I’ll never waste an opportunity to gush about the build quality of Dell’s XPS line.

But I’ve never touched a consumer laptop as gorgeous as the Spectre x360 14. The new Spectre’s sturdy black body, lustrous accents, and boldly sharp edges would make it a standout among convertible laptops across the board, even if it didn’t have a slew of other excellent qualities — which, from its 3:2 screen and packaged stylus to its stellar performance and battery life, it absolutely does.

With a starting MSRP of $1,299.99 ($1,589.99 as tested) the Spectre x360 is easily my new favorite 2-in-1 laptop. Today’s market is full of capable convertibles that look good, work well, and do certain things really well. But while the Spectre x360 14 isn’t a perfect laptop, it tops the pack in almost every area. It’s a stylish chassis, premium panel options, stylus support, a powerful processor, and fantastic battery in one. It’s proof that you can have it all — for a price. 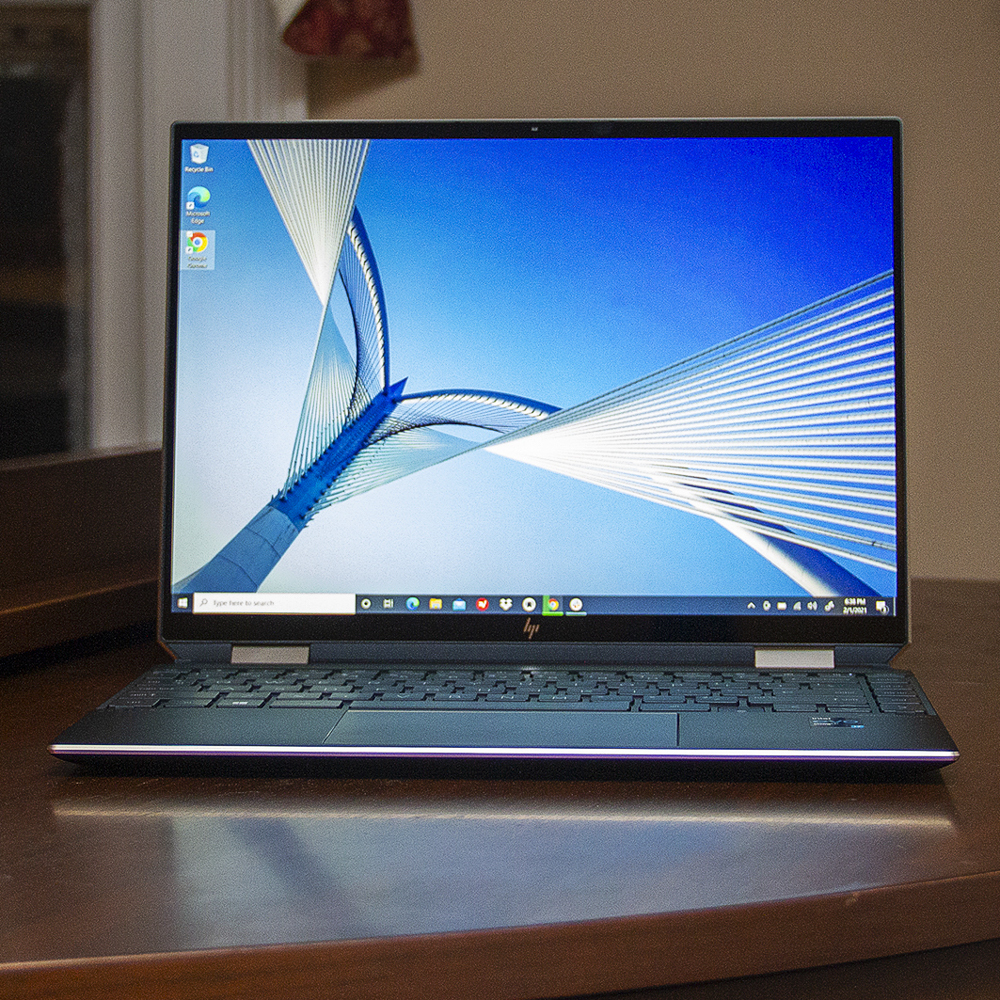 The HP Spectre line is second to none when it comes to design, and this latest model is no exception. Like its 13-inch predecessor, the Spectre x360 14 is made of CNC-machined aluminum. Also like its siblings, you can get the 14 in “nightfall black,” “Poseidon blue,” or “natural silver.” Take a look at some pictures before selecting your color because they each have pretty different vibes. The nightfall black option has a sophisticated, svelte aesthetic that looks tailor-made for a boardroom. Poseidon blue is friendlier and probably the one I’d go for myself.

The accents, though, are what make the Spectre stand out from the legions of other black laptops out there. Lustrous trim borders the lid, the touchpad, and the deck. The hinges share its color, as does the HP logo on its lid. It’s bold without being obnoxious. The two rear corners are diamond-shaped, and one of them houses a Thunderbolt 4 port on its flat edge. (On the sides live an audio jack, a USB-A, a microSD slot, and an additional Thunderbolt 4, which is a decent selection — gone is the trapdoor that covered the USB-A port on the 13-inch model.) And the edges are all beveled, making the notebook appear thinner than it actually is (it’s 0.67 inches thick). Careful craftsmanship is evident here — I’m not exaggerating when I say this Spectre feels like artwork.

And, as the “x360” moniker implies, the Spectre is a 2-in-1. At 2.95 pounds, it’s a bit heavy to use as a tablet for long periods, but it’s smooth and easy to fold and the hinges are quite sturdy. Unlike with many convertibles, there’s barely any wobble when you use the touchscreen. The display is also stylus-compatible; the Spectre ships with HP’s MPP2.0 pen, which attaches magnetically to the side of the chassis.

Despite its design similarities, this Spectre looks noticeably different from its ancestors, and that’s because of the screen. The new model has a 3:2 display, which is 13 percent taller than the 16:9 panel on last year’s device. (It’s kept the same 90 percent screen-to-body ratio.)

There’s barely any wobble when you use the touchscreen

Microsoft’s Surface devices have been using the 3:2 aspect ratio for years, and I’m glad that the Spectre line is finally making the switch. If you’re used to using a 16:9 display (which many modern Windows laptops have) and you give a 3:2 a shot, you’ll see what I mean. You have significantly more vertical space, which means less scrolling up and down and less zooming out to fit everything you want to see. It makes multitasking significantly easier without adding much size to the chassis.

This 3:2 panel can come in a few different forms. My test unit has an FHD option that HP says should reach 400 nits of brightness. I measured it multiple times, but it only reached 285 in my testing — which is dimmer than I’d hope to see from a device at this price point. I’ve reached out to HP to see what’s up and will update this review if it turns out to be a bug. (Of course, 285 nits is still more than enough for indoor office work.)

In addition to the FHD display, you can opt for a 3000 x 2000 OLED panel (HP didn’t provide a brightness estimate for this one; LaptopMag measured it at 339 nits) or a 1,000-nit option with HP’s Sure View Reflect technology, which makes the screen difficult to read from the sides. This will mostly be a benefit for business users.

In terms of other specs, the base model pairs the 400-nit screen with a Core i5-1135G7, 8GB of memory, and 256GB of storage (plus 16GB of Intel Optane). Then, there are a few upgrades you can go for. My test unit, priced at $1,589.99, keeps the base model’s screen but has a heftier processor (the quad-core Core i7-1165G7) and double its RAM and storage. I think this model is a good option for most people — it gets you a top processor and a good amount of storage without too stratospheric of a price tag. If you want to get fancier, you can get the OLED screen and 1TB of storage (plus 32GB of Intel Optane) for $1,699, or the Sure View screen and 2TB of storage for $1,959.99.

Of course, laptops aren’t just for looking at, but you’re not compromising on performance to get this build quality. The Spectre is verified through Intel’s Evo platform, which means that it offers a number of Intel-selected benefits including Thunderbolt 4, Wi-Fi 6, all-day battery life, quick boot time, fast charging, and reliable performance. In my testing, it more than surpassed those standards.

The system handled my heavy workload of Chrome tabs, downloads, and streams speedily with no issues. Battery life was excellent; I averaged 10 hours of continuous use with the screen around 200 nits of brightness. That means if your daily tasks are similar to mine, the Spectre should make it through your workday with no problem. (You’ll likely get less if you opt for the OLED panel.) The processor also includes Intel’s Iris Xe integrated graphics. While you wouldn’t want to use those for serious gaming, they’re capable of running lighter fare.

Elsewhere, I have almost no complaints. The backlit keyboard is snappy with a solid click — it’s easily one of my favorites. The speakers sound good, with very audible bass and percussion. There’s a fingerprint sensor to the left of the arrow keys and a Windows Hello camera, neither of which gave me any trouble.

I have almost no complaints

Apart from the dimness, there are only two things about this laptop that I’m not in love with. They’re both minor; the fact that I’m even mentioning either of them in this review is a testament to how excellent this device is.

The first is the touchpad. It’s quite smooth and roomy (16.6 percent larger than that of last year’s Spectre x360 13) and handles scrolling and gestures just fine. But it’s noticeably stiffer than some of the best touchpads on the market. The press required to physically click is firm enough that I ended up doing it with my thumb most of the time. On the likes of the Dell XPS 13 and the MacBook, clicking with a finger is much less of a chore. When I first clicked with the integrated buttons, I also had to overcome some initial resistance to hit the actuation point (put plainly, every click felt like two clicks). This issue resolved itself during my second day of testing, but it’s still a hiccup I generally only see with cheaper items.

Secondly, bloatware. There are a number of junk programs preloaded onto the Spectre and several pinned to the taskbar. Dropbox, ExpressVPN, McAfee, and Netflix are all on here, and I got all kinds of notifications from them. This is an oddity at this price point, and seeing cheap McAfee alerts popping up on the Spectre is like seeing really ugly bumper stickers on a Ferrari. This software doesn’t take too long to uninstall, but I’m disappointed to see it nonetheless.

But those are really the only two complaints I have, and neither of them should stop you from buying this laptop. It’s beautiful to look at and a dream to use. I found myself using it in my free time instead of my personal device (which almost never happens with review units — I really like my products).

To start using the HP Spectre x360 14, you’ll need to agree to the following:

That’s six mandatory agreements and 20 optional agreements to use the Spectre x360 14.

When we’re evaluating a convertible laptop at the Spectre’s price point, the big question is how it compares to the gold standard of Windows convertibles, the Dell XPS 13 2-in-1. The XPS has a few advantages: it’s a bit thinner and lighter, its touchpad is less stiff, and it has a more modest look that some users might prefer.

But for me, the ball game is close but clear. The Spectre x360’s meticulous craftsmanship, classy aesthetic, and 3:2 screen put it over the top. It also edges out the XPS in a few key areas: the keyboard is more comfortable, the battery life is better, and Dell’s closest-priced configuration to this unit only has half its storage. The Spectre’s smaller amenities that the XPS lacks — like the bundled stylus, the USB-A port, the blue color, and the OLED option — are icing on the cake.

If you’re looking for a premium Windows convertible with a classy aesthetic, that makes the Spectre a no-brainer purchase. This is HP at its best; it’s a luxury laptop in pretty much every area. I can’t imagine that it won’t be the next laptop I buy.