The G Power’s massive battery lasts for days, but other features have suffered to make way for it

The Motorola Moto G Power is a $200 phone that does exactly what it claims — powers you through multiple days of use — but don’t expect any other bells or whistles.

Battery is this phone’s whole deal. Its 5,000mAh battery is about as big as they come right now; it’s the same capacity you’ll find in top-of-the-line devices like the Galaxy S21 Ultra. Rather than making a more well-rounded phone, Motorola has pared back features here and there — a low-res screen, a slower processor — and gone all-in on its headline feature. Cheaper components allow Motorola to sell a $200 version of this phone, and they’re also less power-hungry, making the absolute most of that massive battery.

This device bears the same name as its predecessor from last year, but it differs in a few key ways. Rather than offering one model, this year the G Power is offered in the aforementioned $200 variant with 3GB of RAM and a paltry 32GB of storage. There is also a 4GB RAM / 64GB storage option available for $250 (I tested the 32GB version). This year’s models drop the ultrawide camera and gain a slightly larger screen — 6.6-inch compared to 6.4-inch — with a lower 720p resolution than last year’s 1080p.

If you choose to buy the Moto G Power, it will hold up its end of the bargain. The question is whether you can live with the significant sacrifices Motorola has made to get the biggest possible battery into the most affordable phone it could. 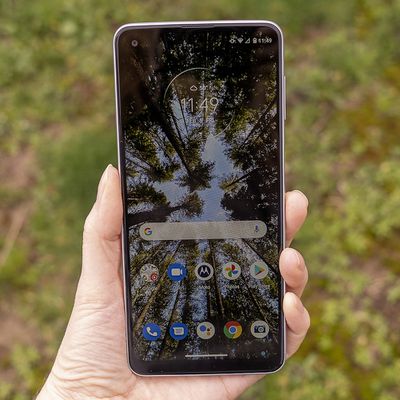 The Moto G Power has a 6.6-inch LCD with 720p resolution. That’s not much resolution to stretch across a fairly large screen, and it shows. Images aren’t quite as sharp as they could be, and the screen overall looks a little dim and washed out to me. The phone itself is on the big side, though I find it a bit more comfortable to use one-handed than the slightly larger 6.7-inch Motorola One 5G Ace.

The G Power uses a Snapdragon 662 processor, and I felt the difference between this and the performance from a 700-series step-up chipset. It’s an extra beat slower jumping between apps and opening the camera. It requires more time to capture and process images in Portrait and Night Vision modes than the Ace does with the same main camera sensor. And heavier tasks like jumping in and out of Google Maps navigation shows noticeable stuttering. That said, you’ll be hard-pressed to find substantially better performance at the $200 price point.

Bottom line, the Power handles day-to-day tasks, plays videos, and navigates adequately. I just felt myself noticing the delays as I was using the phone, which over the course of a day added up to a less than satisfying experience. But for a $200 phone, it gets the job done.

The G Power offers expandable storage by way of a microSD card slot, which feels necessary here. On the 32GB version I tested, 14GB of that storage is already occupied by Android 10 files. That’s simply not enough in 2021. You can pay $50 more for the 64GB model, but that also feels like spending too much to get too little. If you buy this phone, budget for a microSD card.

Motorola will offer an upgrade to Android 11 and says it will provide security updates for the G Power until January 2023. By then, years of updates will probably be slowing the phone down even more anyway.

The Moto G Power delivers on its headline feature. I started on Monday with a fully charged battery. I watched an episode of Bridgerton, you know, for testing. I navigated across town and back. I scrolled through Instagram... a lot. Email, web browsing, rinse and repeat; by day three of moderate use, I was only down to 40 percent.

Even after a trip outside of the house with a lot of picture-taking, I’m going on day four with a battery at 26 percent with just under six hours of screen-on time. I have charged my personal phone at least three times during this time span. We’ve been through roughly 12 news cycles. I myself have aged at least two years. But the Moto G Power carries on.

No doubt the slightly slower processor and low-powered screen help boost those numbers. I left the screen at its default brightness while I tested it, which is just a little dimmer than I’d prefer. It certainly doesn’t look overly bright at its maximum setting, so an additional hit on battery life is something to take into account if you like a bright screen.

Bear in mind that I spent a good chunk of that time at home on Wi-Fi, which is easier on the battery. During non-pandemic times, I would have spent more time out of the house on cell data. And six hours of screentime doesn’t exactly make me a power user.

If you do spend more time on data and do more power-hungry tasks like watch a lot of videos, you’d probably be looking at more like two full days. In any case, Motorola’s claim of up to three days of battery life is entirely reasonable, and you might do even better than that if you spend the bulk of your time on Wi-Fi.

The G Power uses the same main camera as the One 5G Ace, and similarly it takes nice photos in good light. It judges exposure well and captures plenty of detail, especially with close subjects. When its AI recognizes a scene like a landscape, colors look appropriately vibrant, but otherwise it tends toward flat, washed-out colors. In less good lighting conditions, things get a little messier where noise reduction smears a lot of detail. In high-contrast scenes where the camera has brightened shadows, there’s a fair amount of noise and / or noise reduction visible.

As with the Ace, Night Vision tends to produce a washed-out looking image and in this case, it requires both you and your subject to hold still for several seconds. There’s some noticeable shutter lag in all photo modes — enough to make you wonder for a split second if you actually tapped the shutter button — and the display is laggy when panning around in portrait mode.

This camera is just okay, and that’s fine for a $200 phone. The Moto G Power doesn’t have the processing power to pull off more sophisticated HDR or low light photography — for that you’d need to step up to the $350 Pixel 4A. It also won’t be able to keep up with fast subjects, or even slow-moving subjects in low light, but that’s often a struggle for phones priced well above $200.

If you’re on a strict budget and long battery life is a necessity, then look no further than the Moto G Power. However, I hesitate to recommend it to someone who doesn’t meet that description. You will be making sacrifices in order to get that $200 price and multiday battery life. The base storage is way too anemic and the speed is noticeably pokey.

If you have some flexibility in your budget, the $300 OnePlus N10 5G is a great upgrade pick with a better processor and camera. A bit more than that would get you a Pixel 4A with an excellent camera and a well-supported device with better longevity.

Be aware of its limitations and pack a little patience

If $200 is the limit of your budget, the G Power is a fine pick — more so because there are few other options at this price. In addition to its dayslong battery life, it has a better processor than the $100-150 competition and you’re unlikely to find a substantially better screen or camera at this price. Just be aware of its limitations and pack a little patience.

To actually use the Motorola Moto G Power, you must agree to: