A midtail cargo bike for the whole family

Share All sharing options for: Tern HSD P9 review: the everything e-bike

The best measure of an electric bike is how easily it slots into your everyday life. By that metric, the Tern HSD P9 is one of the better ones I’ve tested.

Tern let me borrow one at the end of July, and I rode it at least 12 miles every day around my suburban New Jersey neighborhood for about a month and a half. I took my son to daycare, went to the grocery store, the farmer’s market, the liquor store, the drug store, and a variety of other places too menial to remember. It kept me socially distant from my neighbors as I rode around town and kept me out of my car, which I always appreciate. And whether I was hauling dual panniers loaded with groceries or just myself, the ride quality was impeccable.

To be clear, this isn’t the fastest, most powerful, or even the best-looking e-bike I’ve ever ridden. But it was a solid workhorse that got the job done. That’s mostly due to the Bosch Active Line Plus mid-drive motor, one of the best on the market today, silently churning away between the cranks.

Our review of Tern HSD P9 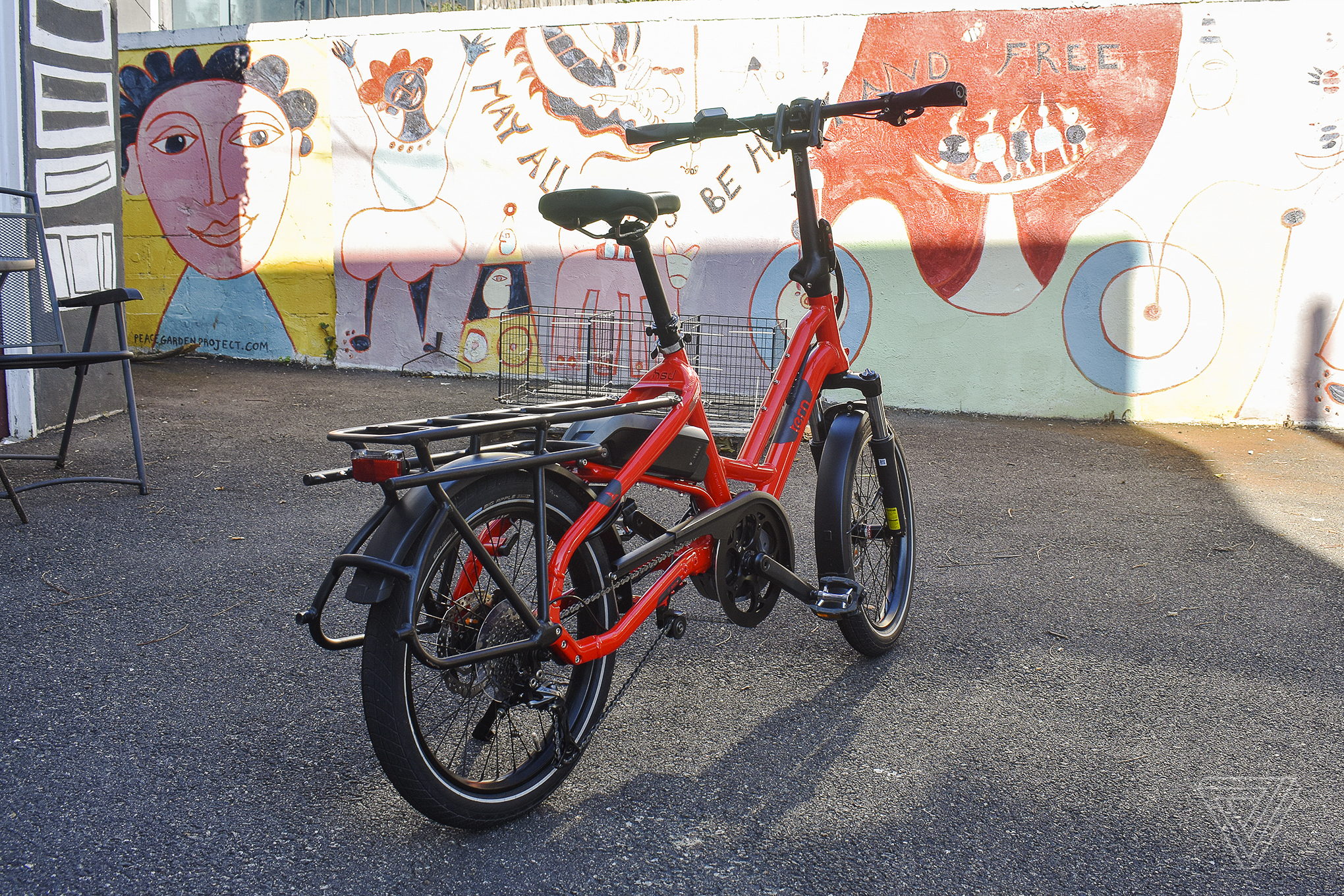 But it’s also because the HSD is an extremely flexible e-bike. The low-step frame combined with the adjustable handlebars and seat post, as well as a custom SunTour front suspension fork, help make this a bike that can easily be passed around among family members or friends. Riders of all shapes and sizes will feel at ease on the HSD.

If it looks a bit shrunken down for a cargo bike, that’s by design. Those in need of something larger can level up to the Tern GSD, which has an extended rack that can carry even more stuff than the HSD. (I’m testing a GSD right now, and I’m very infatuated with it.)

If it looks a bit shrunken down for a cargo bike, that’s by design

During my month-and-a-half test period, the HSD barely demanded my attention, nor did it draw any stares from passers-by or take up too much space in my garage. (I got one looky-loo from a lady who was impressed with the fingernail red paint job.) And while the $3,199 price tag means this won’t be an affordable option for many, you do get a lot of bike for that price.

Regardless, when it comes to cargo bikes, I try not to compare it to other non-electric bikes, but rather to the car I am trying to replace.

Tern got its name when several founding members of the company were hanging out poolside after a bike conference in Las Vegas, drinking beer and talking about the 2010 surfing documentary 180° South, which includes a deep discussion about how people live with nature.

Cycling through some possible names for their nascent company, the group eventually settled on Tern, the name for an Arctic migratory bird that is lightweight, a global traveler, and long-lived. It was also a homophone for “turn,” which fed into the group’s idea of “turning around and moving forward to face the challenges head-on,” according to Tern’s website.

Terns are Arctic migratory birds that are lightweight, global travelers, and long-lived

Tern, which is headquartered in Taipei, Taiwan, fancies itself an urban transportation company, but it’s mostly known for its non-electric, folding bikes. In August 2014, the company announced its first electric bike, the eLink, which weighed 46 pounds (21 kg) and could fold in under 10 seconds. The following year, Tern launched its first lineup of electrified models using BionX motor systems. Later, the company shifted to using more popular powertrain systems by Bosch and Bafang.

The HSD P9, which first came out in 2019, is described as “enormously useful [and] surprisingly small.” Indeed, the HSD is a great bike for anyone looking for cargo-carrying power without those cumbersome cargo bike specs. It’s not exactly lightweight, clocking in at roughly 56 lbs. But when compared to electric cargo bikes from companies like Rad Power Bikes (73 lbs), Carqon (88 lbs), or Urban Arrow (104 lbs), the HSD P9 is practically a featherweight.

Speaking of specs, here’s what you need to know about the Tern HSD P9:

The HSD P9 is a Class 1 electric bike in the US, meaning it’s pedal-assist with no throttle and a top speed of 20 mph. There were times when I missed the twist throttle, especially when getting started from a standstill on a steep incline with a kid and extra cargo on the rear rack. But I also understand why some manufacturers abhor the throttle — and honestly believe that throttles will eventually run into regulatory issues in the future — so I try not to begrudge any bike for its exclusion.

HSD stands for “haul stuff daily” — or if you’re out of earshot of your kids, “haul shit daily.” Arleigh Greenwald, the eponymous Bike Shop Girl who recently got a job as a product manager at Tern (congrats, Arleigh!), calls the HSD “the crossover of electric bikes,” and I wholeheartedly agree. If Riese and Muller’s Load 75 is the Cadillac Escalade of e-bikes and the RadWagon is the Chevy Suburban, then Tern’s HSD is definitely the Toyota Rav4 — a highly capable daily driver with just enough space for a kid and some cargo.

The HSD isn’t completely incognito — just look at that cherry red paint job. It does have some interesting design touches, from the “HSD” logo carved out of the frame below the head tube to the rear rack that also doubles as a stand for when you want to park the bike vertically. That’s a great space-saver for anyone who keeps their bike in their apartment, for example.

Tern makes a couple of folding bikes, like the Vektron, BYB, and fantastically named Verge. I would classify the HSD as a quasi-folding bike since it lacks the full folding capabilities of Tern’s other models. The handlebars can fold down, but that’s about it. Still, it’s a useful feature if you need to transport the bike in the back of your car, for example.

The rear rack is rated for 132 lbs, while the whole bike can carry a combined weight of 374 lbs. Tern sent me two of its Cargo Hold 37 panniers, each of which can hold several big grocery bags. When empty, the bags can be cinched tightly to the side of the bike.

Performance-wise, I wasn’t that impressed with the 400Wh battery pack. While Tern claims the HSD has a range of 69 miles (110km), I found myself needing to recharge the battery after as little as 30 miles of riding on mostly flat surfaces with a few steep hills mixed in. This may seem paltry, but it’s fairly standard across e-bikes, especially while riding in the highest setting offered. This is my preferred riding style, and I know that’s true for many others. That said, more range would be nice, especially considering the HSD’s $3,199 price tag.

The battery, while not integrated in the frame like I would prefer, was neatly stored behind the seat post, parallel to the rear rack. It’s a placement that I think is fairly unique to Tern, and it avoids the unsightliness of a bulging battery pack perched on the downtube. Plus, it helps distribute the weight to the back of the bike, which helps prevent it from toppling over when parking it vertically.

The HSD’s small, fast wheels mean there’s a much lower center of gravity than most cargo bikes, which made cornering much more fun. And it’s shorter than the average road bike, which makes it easier to maneuver and store. The upright seating position gave me a good vantage point to see the cars around me, which made me feel safer while I rode.

I find myself torn over the value proposition of the Tern HSD. It’s a smaller, lighter cargo bike than most, which is certainly an advantage, and yet, it costs noticeably more than other, more powerful cargo bikes. What do you get for that extra cash? Easy storage is nice, but most of that cost is for the Bosch mid-drive motor. The German company arguably makes one of the most reliable and dependable systems in the world — and that comes at a price.

Overall, the Tern HSD P9 is a sturdy electric cargo bike that’s easy on the eyes and easy to stash away when needed. It’s highly adaptable and has a decently powerful drivetrain that shrinks most hills down to size. While I don’t think the HSD is for everybody, I do believe that it aspires to be easy and approachable enough that anyone can ride it.

Photography by Andrew Hawkins / The Verge