Share All sharing options for: The Asus TUF Dash F15 gaming laptop is efficient but not excellent

If it’s a thin gaming laptop you seek, Asus makes several, including last year’s excellent ROG Zephyrus G14 and the intriguing ROG Flow x13 2-in-1 that we recently reviewed. The TUF Dash F15 is the latest option to join the pack, and it’s the one that might catch your eye if you’re looking for a laptop outfitted with an Nvidia RTX 3070 graphics chip and an 11th Gen Intel Core H-series processor, in addition to other perks like a Thunderbolt 4 port and a fast refresh rate display.

As one of the first machines to launch with this processor and GPU, the TUF Dash F15 is a showcase for what you can expect from a thin chassis that costs $1,449, Asus’ MSRP for the configuration it sent over to me. (This specific model is set to release on March 8th. A $1,699.99 model with a slightly better processor is available now. A $1,099.99 model that contains the RTX 3060 is available as of February 15th, 2021.)

Like those other models I mentioned, the TUF Dash F15 is a really solid laptop — except for the fact that, like the Zephyrus G14, it doesn’t have a webcam. For that reason, it’s not an ideal machine if you frequently hop on video calls for work, class, or leisure. In terms of specs, I’m not convinced it has the chops to brave the next wave of demanding games in a year or two. I’ll explain why in a bit. At least for now, it can run most games at their highest graphical settings with relatively smooth frame rates, and it has great battery life. 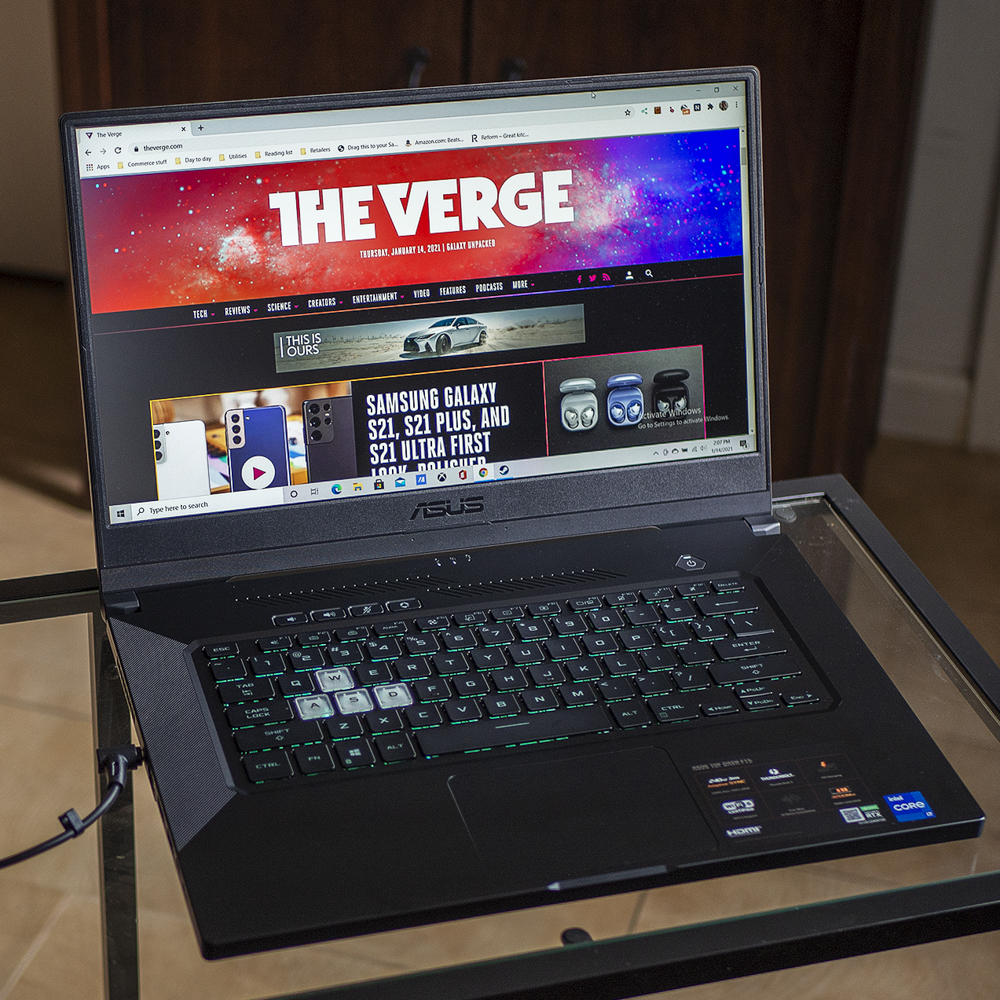 The TUF Dash F15 has a new chassis design that looks more refined than Asus’ TUF A15 gaming laptop. This model has a slimmer, more confident look that ditches the older version’s faux-brushed metal detailing and garish yellow backlit keys. Its lid is gunmetal grey (Asus also makes a “Moonlight White” variant), while the inside is black and all-plastic.

The keyboard is backlit in a color that I would describe as Mountain Dew Baja Blast. It’s a strange color choice — but I don’t hate it. The effect is more subtle than it seems and can be turned off or the brightness adjusted. Also, seeing the light shine through the transparent WASD keys looks cool (in addition to helping you quickly find those all-important directional keys).

I commend Asus for engineering a good keyboard, both in terms of key feel and usability. All of the keys are nicely spaced out, and I was quickly able to acclimate to typing on it. It was also smart to separate the volume keys from the row of function keys since they’re so commonly used.

Continuing Asus’ trend from the Zephyrus G14, this machine also has fantastic battery life. In my testing, the TUF Dash F15’s battery lasted into the start of a second day before needing to recharge. That’s over eight hours of use, which is fantastic longevity for a machine pitched as a gaming laptop. Unplugging the charger automatically puts it in “Silent” mode within Asus’ Armoury Crate performance-tracking software and knocks the display’s default 240Hz refresh rate down to a choppier 60Hz. In this mode, the system switches automatically to integrated graphics. (The Nvidia graphics chip is disabled when you unplug.) That’s a compromise, but I like that no toggling is necessary to get good results like these.

Out of curiosity, I switched to 240Hz while running off the battery. It lasted most, but not all, of my workday. It’s no secret that high refresh rate displays can kill battery life, so I wouldn’t suggest doing this unless you keep a charger nearby.

Speaking of chargers, the laptop ships with a big 200W power brick, but you have the option to recharge it with up to a 100W USB-C charger using its Thunderbolt 4 port. (Thunderbolt 4 doesn’t support wattage over 100W.) Obviously, it doesn’t charge as quickly that way; in fact, in my experience, the laptop drains faster while gaming than it can charge via USB-C.

The TUF Dash F15’s quad-core Intel Core i7-11730H processor and 16GB of DDR4 RAM didn’t miss a beat while I was using 10 tabs in Google Chrome, along with Spotify (streaming music via Bluetooth to my headphones — the laptop’s built-in speakers are awful), Slack, and Affinity Photo. For those apps, this device feels snappy enough to use as a daily driver.

However, this doesn’t seem like the best choice if your work involves editing and exporting video or other processor-bound projects. When I ran our video export test (which crunches an Adobe Premiere Pro project into a 5-minute, 33-second 4K file), it took 6 minutes, 41 seconds, which was slower than I anticipated. The machine’s four-core, 35W TDP processor seemed to be the bottleneck, as Windows Task Manager performance stats showed that it was at full, or near full, utilization the entire time.

There are some older midrange gaming laptops we’ve reviewed that delivered faster Premiere Pro results, thanks to their higher-power 45W 10th Gen hexa-core and octa-core processors. A few include last year’s Lenovo Legion 5i and the 2020 MSI GS66 Stealth as well as the maxed-out Dell XPS 15 we tested. However, I wouldn’t recommend opting for those since Intel has 45W 11th Gen processors in development that should leave the older chips in the dust. But none of this helps this laptop’s case.

The TUF Dash F15 was more middling with high-end gaming than I expected, too. Its RTX 3070 struggled to meet the bar for smooth 60 frame-per-second gameplay when I ran some demanding titles like Control and Red Dead Redemption 2 at their highest graphical settings in 1080p. Open-world titles and games with ray-tracing features were particularly good at pushing this laptop to its limit.

To use the Asus TUF Dash F15, you have to agree to:

That’s five mandatory agreements and 18 optional ones to use this product.

With the games running at their highest graphical settings, the benchmark utility in Horizon: Zero Dawn averaged 68fps, while Red Dead Redemption 2’s benchmark averaged 58fps. Death Stranding fared better at around 80fps with DLSS settings set to quality mode. Control topped out at around 50fps with all ray-tracing settings set to max and DLSS on, though performance varied wildly depending on the level of action or environment. These are all very playable frame rates, though the numbers tell me that you’ll need to make a few graphical tweaks to run these games smoothly. And possibly, games releasing in the next year or two might not fare as well as these ones.

I was expecting better performance from this chip in these tests since the MSI GP66 Leopard, also using the RTX 3070, tested with higher numbers. However, there’s a good reason for these results. Asus explains on its product page that it set the chip’s clock speed and total graphics power to its lowest-possible power requirements, likely due to the laptop’s slim design and to maintain efficient performance. The TUF Dash F15’s GPU is clocked at 1,290Mhz (with a boost of up to 1,390MHz), and it has a total graphics power of 85W; this is compared to 1,620MHz and 130W in the GP66 Leopard, which is the highest-possible configuration.

This kind of occurrence isn’t new. But what is new (and the cause for some confusion) is Nvidia’s recently evolved Max-Q branding, which previously indicated the power discrepancy noted above by attaching “Max-Q” to the graphics chip’s name. It now exists instead to tell people that a laptop ships with a particular set of power and efficiency software tools, which this one does.

In short, Asus’ new TUF Dash F15 includes a batch of specs that offer quite a bit of power when it’s needed and long-lasting efficiency when it’s not. But while the laptop provides a good balancing act and some relatively smooth gaming, I don’t think it’ll be perfect for everyone, mainly because it doesn’t really make the grade for many of the things we use laptops for.

Not only is it unusable for video meetings (again, no webcam), but it probably won’t meet the bar for more heavy-duty tasks like video production or even a daily load of apps like the ones I use. And for gaming, this slim machine’s RTX 3070 isn’t as powerful as I would want for a long-term investment like this, especially because I’m not convinced it has the chops to brave the next wave of demanding games in a year or two.

I think there will probably soon be some machines containing these new components that can manage to please everyone. But this isn’t it.