Razer Book 13 review: stop gaming, and get to work

Business on the lid, party in the keyboard

Share All sharing options for: Razer Book 13 review: stop gaming, and get to work

For years, Razer has made some of the best gaming laptops on the market. They’re not uniquely famous for their high performance (Blades are powerful machines but not the fastest out there) or their prices (which are high). They’re famous for their high-quality build and their premium design. In short, Razer makes the best-looking gaming laptops on the market.

Razer has decided this year that this aesthetic shouldn’t be limited to gaming laptops. In its first notebook designed for productivity instead of gaming, Razer has combined its signature look and feel with a 60Hz 16:10 touchscreen and a lower-power processor with integrated graphics. The Razer Book aims to be a Razer Blade on the outside and a Dell XPS 13 on the inside — and it mostly succeeds. Razer has made an excellent laptop with performance rivaling that of the top Windows clamshells on the market. That said, it’s pricey for what it offers, and it has a few drawbacks that mean it won’t be the right choice for everyone.

On the outside, the Razer Book 13 borrows many of the Blade Stealth 13’s signature features. Razer’s three-headed snake adorns the lid. You may also recognize the customizable per-key RGB keyboard with speaker grilles on each side. (Unlike what you’ll see on some more garish gaming rigs, the lighting on these keys looks professional and adds to the sophisticated vibe.) The chassis is CNC-machined aluminum, with a smooth metallic finish. This is a fancy way of saying it’s quite nice; the MacBook Pro is made of the same material, as are many of the best Windows laptops including the XPS 13 and HP’s Spectre x360 14.

Our review of Razer Book 13 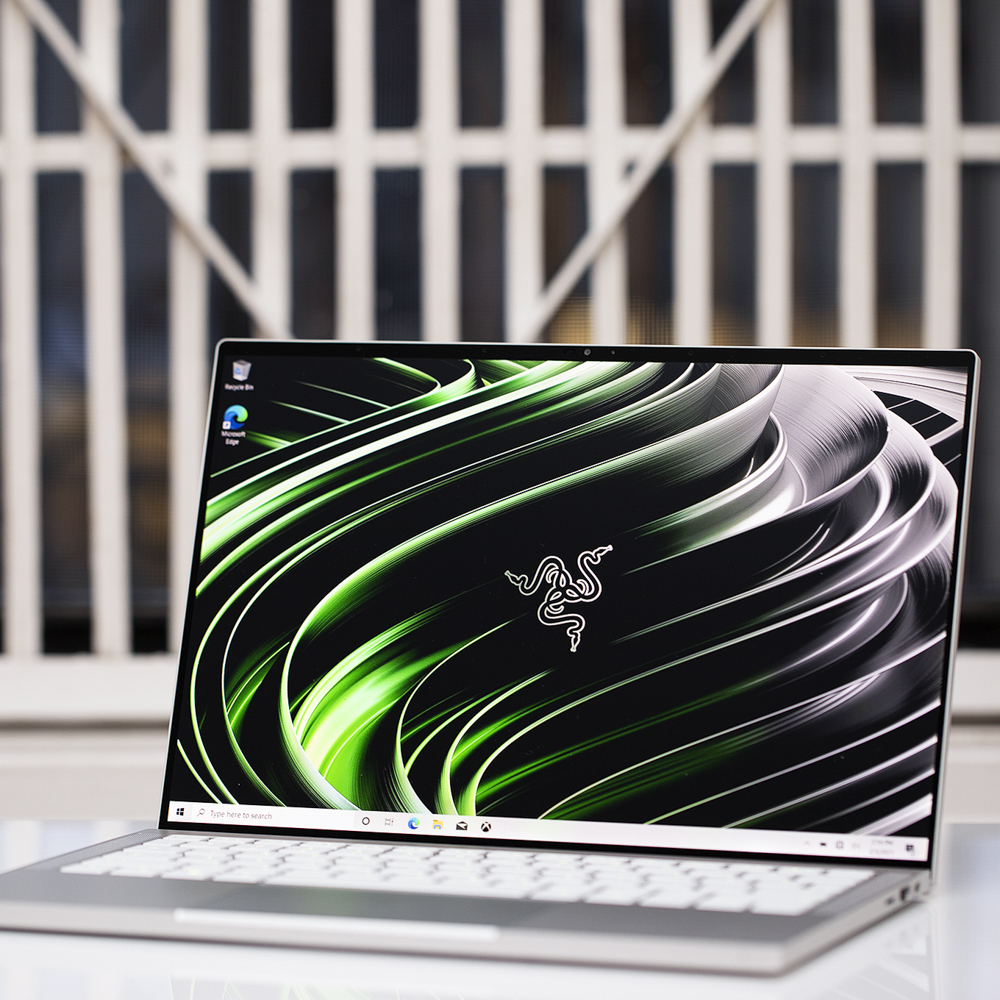 But some subtle differences make clear that this laptop is for the office, not for gaming. It’s slightly lighter than the Blade Stealth, at 0.6 inches thick and 3.09 pounds. The port selection is also better than that of the Stealth: there are two Thunderbolt 4 ports, one USB-A 3.2 Gen 1, one HDMI 2.0, one microSD slot, and one combo audio jack. This is also a big advantage the Razer Book has over the XPS 13 and MacBook Pro, both of which have comparably limited selections.

The biggest change, though, is the 16:10 touch display. This makes the screen taller than the 16:9 panels you’ll find on the Blade (and on almost all dedicated gaming laptops). It lends you plenty of extra room for multitasking, with less scrolling and zooming necessary to see everything you need to. Aspect ratio aside, the 1920 x 1200 display on our review unit was quite bright, maxing out at 494 nits in my testing. It’s quite vibrant as well, with sharp and bright colors. While the panel has a glossy texture, it kicks back little to no glare in bright settings.

Miscellaneous laptop stuff: the glass touchpad is roomy and quite smooth — definitely one of my recent favorites. The speakers sound great, with strong percussion, though I did hear some distortion at higher volumes. And I almost never get to say this, but the webcam isn’t that bad; it delivers a decent and fairly accurate picture, though there’s no privacy shutter or kill switch.

In a vacuum, I have very few complaints about the Razer Book’s chassis. I will point out that I find it slightly worse than the XPS 13 in a few (subjective) areas. Not only is it thicker and heavier than Dell’s flagship, but it just looks and feels clunkier, lacking the XPS’s sleek portability. And while Razer’s keyboard and touchpad are both fine, they’re not as exceptional as either on the XPS; Dell’s keyboard has more travel and a more satisfying click, and its touchpad is a bit more comfortable. Most frustratingly to me, Razer provides less storage for the price. You only get 256GB of storage in the base and midrange models and can only get 512GB in the top-end $1,999 configuration — 512GB XPS models come as low as $1,399, and the $1,599 XPS has 512GB of storage while the $1,599 Razer Book has just 256GB (their specs are identical otherwise).

There’s one area where the Razer Book solidly beats the XPS, and that’s performance. All Razer Book models are Evo-verified, meaning Intel vouches for them as top performers. And our test model includes a high-clocked (up to 28W) version of one of the chipmaker’s top ultrabook processors, Intel’s Core i7-1165G7.

This system flew through the demanding tasks we threw at it. It took nine minutes and 21 seconds to complete our Premiere Pro media test, which involves exporting a 5-minute, 33-second 4K video. That’s the fastest time I’ve ever gotten from a system with the quad-core 1165G7 (which powers many of the best ultraportables on the market). The XPS 13 took 10 minutes and 43 seconds to complete the same task; the more powerful XPS 13 2-in-1 took 10 minutes and five seconds.

Razer still hasn’t quite caught Apple’s M1 systems, though. The most recent MacBook Pro finished the test in seven minutes and 39 seconds. And of course, integrated graphics can’t hold a candle to a midrange GPU, even in a thin and light chassis. The Blade Stealth 13 with a GTX 1650 Ti knocked out the export in just five minutes and 50 seconds.

In real-world performance, the Razer Book also shines. The laptop handled my fairly demanding load of Chrome tabs, Zoom calls, and other apps with no issue. It boots up from standby almost instantly and very quickly from the powered-off state as well. Of course, the XPS 13 is also quite good in these scenarios.

While the Book 13 is decidedly not a gaming laptop, it is a Razer-branded product, so some might wonder how it games. The answer is it delivers some of the best integrated graphics performance I’ve seen from a Windows clamshell. It solidly beats the XPS 13 clamshell and is about on par with the more powerful 2-in-1. In practice, it’s most suitable for lighter gaming and heavier titles at lower settings.

To start using the Razer Book 13, you’ll need to agree to the following:

That’s four mandatory agreements and 13 optional agreements to use the Razer Book 13.

The Razer Book averaged 142fps on Rocket League’s maximum setting without dipping below 125; the XPS put up 111fps with a minimum of 100. Razer also wins on League of Legends, averaging 219fps to the Dell’s 205fps. Of course, since both machines have a 60Hz screen, you won’t observe a difference in the quality of these games — but these numbers should give you a sense of the Razer Book’s power.

Graphic performance will make something of a difference on heavier titles. The Razer Book beat the XPS on the more demanding Overwatch at Ultra settings, averaging 65fps to the XPS’s 48fps. It also averaged 32fps on Shadow of the Tomb Raider at its lowest settings, where the XPS averaged 22fps. That’s significant because it means you could feasibly play Tomb Raider in 1080p on the Razer Book, which would be unpleasant to do on the XPS.

That result also makes clear that — to reiterate — despite aesthetic similarity, this laptop is not a Blade. The Stealth 13 averaged 45fps on Tomb Raider’s highest settings. If you want to game with this form factor, buy the Blade. You’ll also get way more storage for the price.

When it comes to cooling, the Razer Book has chops. It did a significantly better job of keeping its CPU cool than the XPS did in my testing. During the Adobe export, the 1165G7 stayed comfortably in the mid-60s to mid-70s (Celsius) with occasional spikes as high as the low 90s. It largely remained in the high 50s during the Tomb Raider benchmark, with spikes up to the mid-70s. All in all, I didn’t see any throttling or slowdown, and the keyboard never got uncomfortably hot under load.

But you’re making a trade-off for all this power: battery life. It’s not terrible, but it’s nothing to write home about. I got an average of six hours and 45 minutes while using the Book 13 for standard office work with occasional Zoom calls and streaming at 200 nits of brightness. (This was in the Battery Saver profile, which you can toggle in Razer’s Synapse software.) That means I can’t go a full day without charging, though your mileage will vary based on your tasks and settings. I’ve gotten over nine hours putting plenty of machines through that same workload, including the XPS 13.

The Razer Book 13 has a lot of things going for it, especially for Razer fans. It’s certainly one of the best ultraportable laptops you can buy — but whether it’s the best is a complicated question to answer.

In some areas (keyboard, touchpad, portability), the Razer Book is slightly worse than the XPS 13. In others (display quality and build quality) it’s about on par. And it brings a few nifty features (the port selection and the RGB keyboard) that Dell’s clamshell doesn’t have — but I doubt those are making or breaking the purchasing decision for most people. On net, I think Razer comes out slightly worse on the chassis front.

But that’s not where the Razer Book makes its case. That category is performance. Compared to other Windows clamshells I’ve tested in the past year, the Razer Book is top of the class. It stands out in productivity and media work as well as gaming. On the other hand, you’re making some sacrifices for that power, in addition to the hefty price tag it carries. You can get a few hours more battery life from a number of laptops in the Razer Book’s class (including the XPS 13) and significantly more storage as well. For folks in the Book’s intended audience (users looking for a portable work or entertainment driver) those trade-offs are probably worth considering.

Ultimately, the Razer Book 13 is an impressive new laptop from Razer with a lot to like, and I’m sure many customers will be happy with it. But those trade-offs mean I can’t quite call it the best product for most people.