No Founder’s Edition this time, so say hello to EVGA

So you want to buy a graphics card. Join the club: every modern game-capable GPU has instantly sold out for months. The pandemic birthed a global semiconductor shortage, Trump’s trade war didn’t help, and now even four-year-old graphics cards can fetch several hundred dollars on the secondhand market.

Into that chaos, Nvidia is launching the $329 GeForce RTX 3060, a card the company insists will actually have a starting price of $329, and I’m reviewing a model of that card that they claimed would actually go on sale for that price today: the EVGA GeForce RTX 3060 XC Black Gaming. “Supply will be limited though,” EVGA tells The Verge. Of course it will. Sure enough, we couldn’t find a $329 RTX 3060 to save our lives during this morning’s launch.

Even if it eventually winds up being easy to purchase, though, I’ve got to wonder if the 3060 is the affordable GPU that we’ve been waiting for. 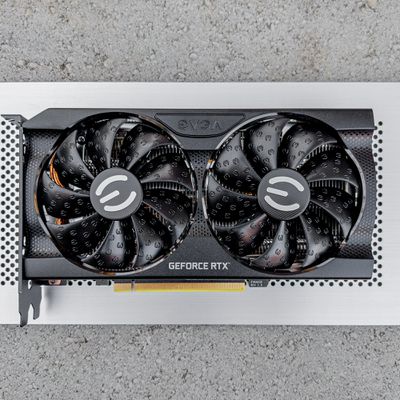 The vanilla 3060’s story isn’t quite as inspiring by comparison. Nominally, it’s only a little less expensive than the 3060 Ti, but you sacrifice more than a little bit of performance to get there.

Before we dive into benchmarks, let’s spend a moment on the EVGA XC Black Gaming. I kind of dig the design: the twin-fan, dual-heat-pipe card is small and easy to slot into a Mini-ITX case — and with a tried-and-true eight-pin PCIe power connector instead of the proprietary 12-pin connector featured in Nvidia’s own RTX 3090, 3080, 3070 and 3060 Ti cards. You still get the full array of video outputs, including three DisplayPort 1.4a ports and an HDMI 2.1 port with HDCP 2.3 support.

Here’s what it looks like next to my own 3060 Ti Founder’s Edition. It’s notably smaller:

The eight-inch-long card isn’t even the smallest RTX 3060 you’ll see this year, as Nvidia’s partners have some single-fan designs that should squeeze into practically any case on the market that has room for a dual-slot GPU. This dual-fan XC Gaming cooler is potent enough that EVGA already fit an RTX 3060 Ti into this form factor, too.

While I can’t imagine all those embossed “E” symbols exactly help my fan performance, they don’t seem to especially hurt, with a moderately pitched whirring sound at full bore instead of a mini jet engine scream. It’s both a few degrees cooler and a tad quieter than my 3060 Ti FE during a demanding game, hovering around 70 degrees Celsius and 2,200 RPM with my two Noctua A12x15 case fans backing it up and around 80C without.

Add the lower 550W power supply requirement (the card draws 170W, versus 200W for the Ti), and that’s a lot of reasons the 3060 should be popular for mini builds.

Okay, let’s talk performance. If you’ve read my previous two reviews, you know I’m a bit of a cheapskate. I’m the kind of person who’d definitely buy a $330 graphics card instead of a $600 one, and that means I’m also the kind of person who’d pair it with my existing, plenty-good-enough CPU instead of upgrading my whole rig. I’m running the RTX 3060 with my quad-core 4.2GHz Core i7-7700K, and proud of it.

You probably know that CPU power matters less as you raise the resolution; at 4K or 1440p, your frame rate is limited a lot more by your graphics card in all but a handful of games.

But at 1440p, the vanilla 3060 doesn’t have quite enough oomph to regularly make it over 60fps in the latest games without tweaking lots of settings in a build like mine — and yet the 3060 Ti generally hits 60 without a problem.

All games tested at highest graphical preset unless specified.

I benched 14 games with the 3060 and 3060 Ti at ultra spec, with and without ray tracing and Nvidia’s DLSS, and the 3060 Ti was almost always between 15 percent and 35 percent faster. The 3060 is punching below its weight: a higher boost clock and 12GB of memory can’t hope to make up for 26 percent fewer cores and a narrower 192-bit memory bus.

You’ll see in the chart that neither card let me comfortably run the most demanding games like Cyberpunk 2077 and Metro Exodus at ultra spec at 1440p, but the difference between these two cards is the difference between running those games at medium or high levels of detail. High settings tend to look a lot better, and it’s nice to have some additional headroom for future games that’ll push the GPU even harder.

That said, these frame rates are still nothing to sneeze at. My four-year-old GTX 1080 couldn’t dream of maxing out Shadow of the Tomb Raider at 1440p at a smooth 78fps or Warzone at 87fps. I had to play through a bunch of Cyberpunk 2077 at low spec earlier this year, which I absolutely do not recommend, and I’d honestly been saving Control until I could find a new GPU. It’s also very nice to be able to play Star Wars Squadrons at a full 120fps (even if I could get to 144fps with a 3060 Ti) or the delightful but unoptimized Valheim at around 60fps with the eye candy turned on.

And if you’ve got a 1080p monitor instead of 1440p, or if you’re a fan of Nvidia’s resolution-reducing, AI-sharpening DLSS technique — I hate it, my colleague Tom Warren loves it — you can genuinely turn on ray tracing with a $329 graphics card and begin to experience the wonder of real-time reflections. A 46fps average in Control may not sound like a lot, but it’s a smooth game north of 45fps if you’ve got a G-Sync or FreeSync monitor actually delivering each of those frames, and that’s what I saw with ray tracing turned on at 1080p. With ray tracing off, Watch Dogs Legion and Metro Exodus look playable at 1080p high spec as well.

But even then, 1080p is a resolution where your CPU begins to matter, and my Core i7-7700K or earlier won’t always be enough. The new Microsoft Flight Simulator is famously CPU-limited, and to some degree so is Cyberpunk, where I saw dips below 60fps no matter what level of detail I’d set.

If you’ve specifically been waiting for a $300-ish card to replace an aging GPU, you’ll be satisfied with lower settings over the next couple of years, and you can actually find an RTX 3060 at its retail price, I don’t think you’ll be disappointed. But I’d set aside $500 for an RTX 3070, and though I settled for a $400 RTX 3060 Ti, I can’t imagine settling for a 3060 instead.

If you have an extra $70 in the budget for the slightly beefier card, I would absolutely spend it. And if you can’t find what you want, I’d say keep on waiting. The GPU market is wild right now, but more chips are coming, including what should be a more affordable AMD GPU on March 3rd.

Photography by Sean Hollister / The Verge

The best Black Friday deals under $25