Samsung’s flagship Chromebook is less expensive and better than before

I’ll spare you the suspense: the battery life is good.

It’s not incredible. The Samsung Galaxy Chromebook 2 is far from the longest-lasting Chromebook I’ve ever tested. But after last year’s Samsung Galaxy Chromebook couldn’t even make it five hours on a charge, my expectations were on the floor. I performed my first battery test on this year’s sequel in an optimistic but nervous state. Finally, several months after the Chromebook 2 was announced, I’m breathing a sigh of relief. To repeat: the battery life is not a disaster, folks. The battery life is fine.

That’s sort of the theme of this machine. There are a couple of standout features, and the rest of it is fine. And I’m very happy with that.

Our review of Samsung Galaxy Chromebook 2 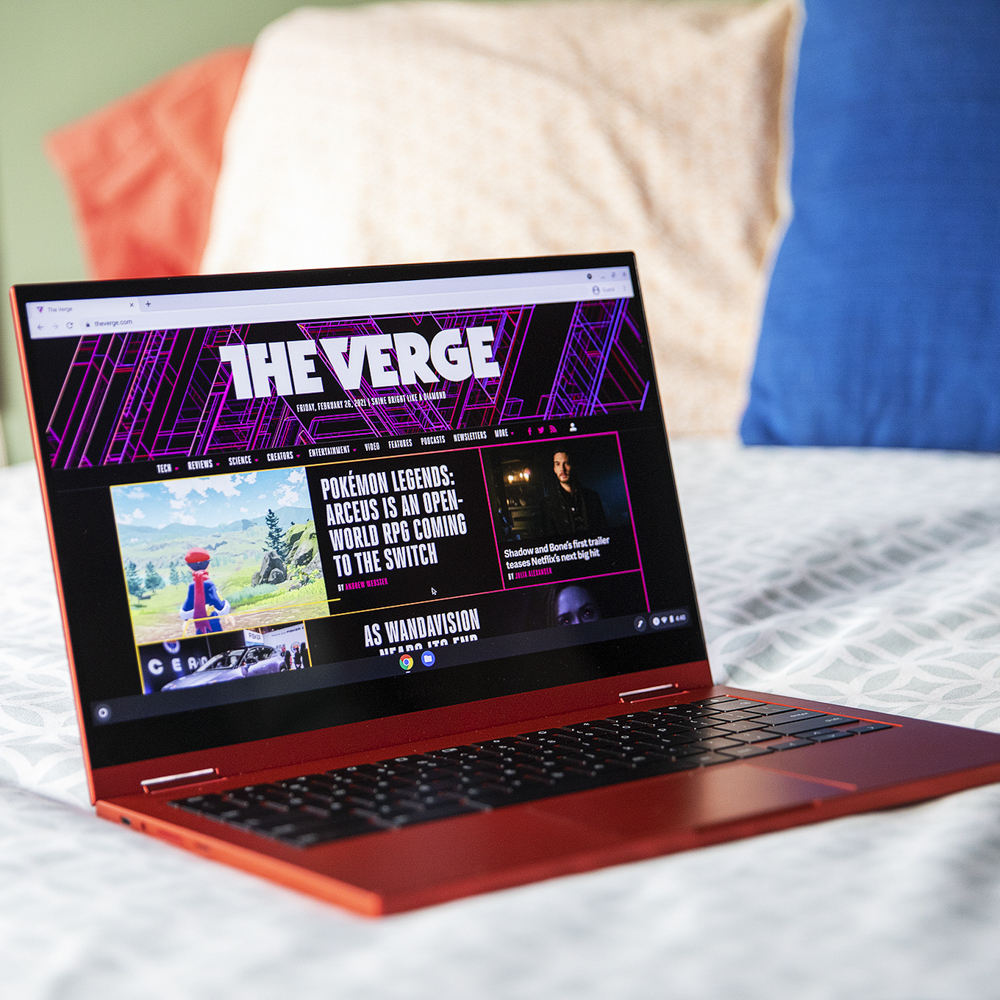 Samsung’s Galaxy Chromebook, released almost a year ago, was a high-risk, high-reward play. There were a number of fantastic features, some of which (the OLED screen, the built-in S Pen, the 0.38-inch-thick chassis) were so fancy it was shocking to see them on a Chromebook. But two of its features were significant problems: the $999 price tag (putting the device in competition with the likes of the MacBook Air), and the battery life.

The Samsung Galaxy Chromebook 2 (which isn’t so much a sequel to the Galaxy Chromebook as it is a more affordable alternative) lacks some of the Galaxy Chromebook’s most ambitious features. The stylus, the fingerprint sensor, and the OLED panel have all disappeared. But in their place are all-day battery life and a sub-$700 price tag. In doing so, it makes its case not as a groundbreaking Chromebook of the future, but as a device you might actually want to buy today.

Pick the thing up, and you’ll start to see where Samsung has cut some corners. It’s thicker and heavier than its predecessor, at 0.55 inches thick and 2.71 pounds, respectively. It’s still plenty light, though it’s a bit hefty to hold as a tablet for long periods. With square edges, it also has a blockier vibe, and the finish feels a bit plasticky and is quite a fingerprint magnet (though the prints are easy to wipe off if you have a cloth on hand).

The Samsung Galaxy Chromebook 2 presents you with multiple things to agree to or decline upon setup.

The optional things to agree to are:

None of these changes are massive knocks against the Galaxy Chromebook 2, though, especially at this price point. It still looks quite nice, and the aluminum chassis is sturdy. There’s little to no flex in the display or keyboard, and while I saw a bit of screen wobble while typing and using the touchscreen, it wasn’t too distracting. This is where the Chromebook 2 has an advantage over our current top pick, the Acer Chromebook Spin 713. That device is bulkier than Samsung’s, quite bland in its design, and has a bit more flex in its keyboard and screen.

The really big chassis downgrade Samsung has made is in the display. The Galaxy Chromebook has a 4K OLED panel that’s absolutely beautiful but, to be honest, not necessary for the majority of people. Instead, the Chromebook 2 is the first Chromebook ever to feature a QLED panel. QLED panels aren’t OLED, despite the name similarity; they’re LED-backlit LCD screens that use Samsung’s quantum-dot technology.

But OLED or not OLED, this is still one of the best displays I’ve ever seen on a Chromebook. It’s gorgeous. Colors were vibrant and accurate, with solid contrast and fine details. This machine is great to watch videos on. It is glossy and kicks back some glare but nothing that was too distracting. The other disappointment is that it’s 16:9 (1920 x 1080 resolution). The Chromebook Spin 713 also has a very nice panel at the roomier 3:2 aspect ratio. But on the whole, the Chromebook 2 looks great. Its speakers sound quite good as well, making for a solid entertainment device all around.

I’ll admit that the keyboard took some getting used to. It’s flatter than some of the best Chromebook keyboards I’ve used, including that of Google’s Pixelbook Go. But it does have a nice key texture with a click that’s satisfying but not too loud. I was enjoying it after a few days into my testing. In terms of ports, you get two USB-C ports (one on each side — bonus points for convenient charging!), a microSD slot, and a headphone jack. The one thing I’d wish for is a USB-A, but I know I’m fighting a losing battle there.

As I noted before, the Chromebook 2 is missing some of the snazzier features you’ll see on more expensive devices (including the Galaxy Chromebook). The most significant is that there’s no biometric authentication on this; it’s password-only, and I do miss the convenience of the fingerprint reader on its predecessor. (If you’re super anti-password, you could, technically, pair the Chromebook to an Android phone and unlock it with that phone’s biometrics.)

Another thing you don’t get is a bundled stylus. The Galaxy Chromebook shipped with a nice pen, which lived in a tiny garage in the chassis. The Chromebook 2 is compatible with USI pens, but you’ll have to store them separately. And there’s no camera on the keyboard deck, something a number of recent Chromebooks have included to allow for easy front-facing photos while in tablet mode.

But while those features are all nice bonuses, they likely won’t impact the average user’s experience too much. And at the $549 to $699 price points, I’m not enraged by their absence.

In my first hands-on with this device, I was hesitant about the base configuration. Despite the appealing price, a Celeron with 4GB of RAM is quite an entry-level system, and I generally wouldn’t recommend it for anyone who needs their device to do school or office work. However, I now think there’s one compelling use case for the Celeron model: a Netflix machine. If you don’t plan on using the Galaxy Chromebook 2 as a primary driver but want to take advantage of the QLED screen for entertainment, you can probably get away with the $549 price. (Everyone else should probably spring for the Core i3.)

The Core i3 is a step down from the Core i5, the processor that powered the Galaxy Chromebook. But like an OLED screen, that processor is overkill for many Chrome OS tasks. As I used the Chromebook 2 to send emails, fiddle with spreadsheets, write in Google Docs, stream Spotify, and do other standard work, I didn’t notice any performance issues. I also never felt any heat in the keyboard, the touchpad, or the bottom of the deck. (The Galaxy Chromebook 2 has a fan, which some thin Chromebooks don’t.)

Battery life, as mentioned, is quite acceptable. I averaged 7 hours and 21 minutes of continuous work at 50 percent brightness, sometimes using a mix of Chrome and Android apps and sometimes sticking mostly to Chrome. The Chromebook 2 does take a bit of time to charge, though. It only juiced up to 54 percent in an hour.

Where the system lagged was in tasks that leverage the internal storage. The Galaxy Chromebook 2 has eMMC storage, which is considerably slower than the SSD you’ll find in most laptops. The process of getting a batch of around 100 photos from a camera into Adobe Lightroom just dragged. It took so long that, several times, I considered aborting the mission and hopping over to my MacBook. I ran AndroBench to confirm that the storage was the issue, and the results were... not great. To be clear, eMMC isn’t a huge knock against a Chromebook at this price, but it is a spec I’d stay away from if you’ll need to do anything with photos or other tasks that involve writing files to the drive.

Finally, I think this is my first Chromebook testing period where I haven’t run into any big hiccups with Chrome OS. The operating system itself has been smooth for a while, but I’ve run into all kinds of issues with Android apps (one of the OS’s big selling points) in the past. No major problems here, though: nothing crashed, nothing bricked the device, nothing randomly changed size, nothing disappeared during tablet-mode transitions. That’s a welcome relief.

Your experience with Android apps on the Galaxy Chromebook 2 will vary widely based on the app. I generally used them to keep distractions like Twitter separate from my browser where I was working. Some popular services, such as Podcast Addict and 1Weather, don’t have great browser equivalents, so it’s handy to be able to load those apps through Chrome OS. But on net, I found that the apps I used for stuff every day — Slack, Messenger, Google Docs, Reddit, Twitter, Gmail — were either equivalent to or worse than their browser counterparts. The Android interfaces were generally slower to update and still had some kinks to work out. (You can’t click and drag to highlight in Docs, for example.) Slack also wouldn’t let me clear my status icon and occasionally sent me multiple pings for the same message. And Facebook Messenger occasionally refused to minimize, and also sent me huge dumps of notifications each morning from conversations I’d had on my phone the previous night. If you run into issues with Android apps, you can use the web app versions, which mostly work great.

In comparing the Chromebook 2 to the market, the most prominent competitor that comes to mind is Google’s Pixelbook Go. It offers similar benefits (an attractive design, decent battery life, a portable build) with similar caveats (no biometric authentication, no built-in stylus). But as of this writing, the $649 Pixelbook Go configuration comes with only 64GB of storage and an older Core m3 chip. So while there are reasons certain folks might prefer Google’s device (it has a better keyboard, it’s thinner and lighter), I think the $699 Galaxy Chromebook 2 is the better value among the two. For just $50 more, you get a better processor, more storage and RAM, a brilliant color, a convertible build, and a spectacular screen.

A more difficult comparison is the convertible Chromebook Spin 713. For $70 less, you can get that system with a Core i5, an NVMe SSD, a better port selection that includes USB-A and HDMI, and a 3:2 screen that’s also excellent. On the whole, Acer’s device still offers better value for the average person. That said, there’s a valid reason some people may want to splurge on the Galaxy: looks. The Spin 713, like a number of Chromebooks that are great on the inside, looks like something that you’d see on a middle school laptop cart. Pared-down as it is, the Galaxy Chromebook 2 is still a Samsung device: it asks a premium for hardware that’s beautiful to look at and built to last.