Share All sharing options for: Microsoft Surface Pro 7 Plus review: built for business

You could now line up five years’ worth of Surface Pro devices next to each other and it would be all but impossible to tell them apart. Microsoft’s new Surface Pro 7 Plus keeps the same familiar design, which is likely just to satisfy corporate customers who want to standardize their hardware for years at a time. That might be good news for business customers, but for the rest of us who want slimmer display bezels and a more modern design like the Surface Pro X, then the wait continues.

While I’ve bemoaned the current design of the Surface Pro for a couple of years now, there are some changes inside the Surface Pro 7 Plus that will appeal to many. Microsoft now offers built-in LTE on select models, and the SSD is now removable, much like the Surface Laptop 3 and Surface Pro X. Intel’s latest processors also promise better performance and battery life. It’s nearly everything you’d want from a Surface tablet in 2021, but I still wish it looked like a Surface Pro X with an Intel chip inside.

Our review of Microsoft Surface Pro 7 Plus 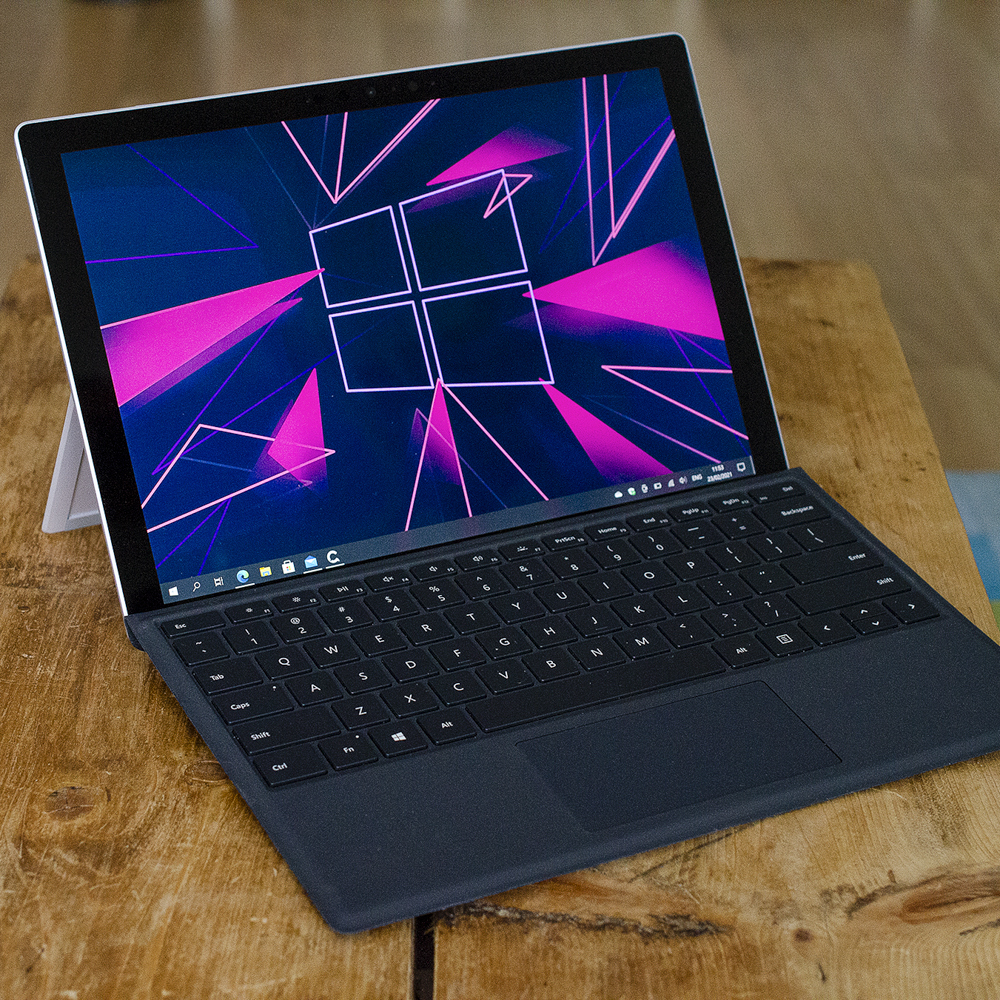 The Surface Pro 7 Plus starts at $899.99, which is a $150 premium on the price of the Surface Pro 7. Thankfully, the base model is now the Intel Core i3 version, with 8GB of RAM and 128GB of storage. Microsoft has dropped the 4GB of RAM option for the Plus model. I’ve been testing a Core i5 model with 16GB of RAM, 256GB of storage, and built-in LTE connectivity, which is a steep $1,649.99 before you add a keyboard or stylus. The cheapest option for LTE is the $1,149.99 model with a Core i5 processor, 8GB of RAM, and 128GB of storage. Microsoft offers all 11 models in the classic silver option, but oddly the black version isn’t available with built-in LTE. You’ll also need a separate Surface Type Cover, and the business versions are priced at $159.99.

Overall, the hardware on the Surface Pro 7 Plus is almost identical to the Surface Pro 7. There’s the same 12.3-inch (2736 x 1824) touchscreen with its 3:2 aspect ratio, a single USB-C port, and the regular USB-A port. Microsoft still hasn’t made the switch to Thunderbolt 3 or 4 here, so you can’t hook this tablet up to an external GPU or use many of the Thunderbolt drives and docks available.

The real changes to the Surface Pro 7 Plus can be found inside. Microsoft has moved to Intel’s latest 11th Gen processors, and you can pick between Core i3, Core i5, or Core i7 variants. I’ve been testing the Core i5 model, and it has remained cool even when using heavy apps like video or video-editing software. Like other Core i5 Pro 7 models, this has no internal fan, so it’s also silent while working.

These latest processors also include Intel’s Iris Xe graphics. While it’s not enough to turn this into a portable gaming laptop, it does help make the Surface Pro 7 Plus feel a lot snappier in a variety of tasks. Combined with improved SSD read and write speeds, lightweight photo and video editing is certainly faster than what I’m used to with the regular Surface Pro 7.

The biggest new hardware addition is built-in LTE, though. It’s the first time the Surface Pro lineup has included this for a few years, but unfortunately there’s no 5G support. Microsoft is using Qualcomm’s older Snapdragon X20 LTE modem inside the Surface Pro 7 Plus. There’s a dedicated SIM slot at the side of the device, which replaces where you’d normally find the microSD slot.

As England has been in a pandemic lockdown for months, I haven’t ventured outside enough to really push the LTE connectivity to its limits, but I didn’t find it impacted battery life too much in my limited tests. LTE connectivity is a great option to have on a device like the Surface Pro, especially for those who normally work remotely, visit clients, or just want something to replace really bad Wi-Fi connectivity.

As with other Windows 10 computers, the Surface Pro 7 Plus presents you with multiple things to agree to or decline upon setup.

In addition, there are a slew of optional things to agree to:

The other significant hardware change on the Surface Pro 7 Plus is removable SSDs. This is really designed for commercial users to swap out faulty SSDs or to retain corporate data. The SSD is easily accessible from an access door at the rear of the Surface Pro 7 Plus, and a simple SIM tool will open it up. Microsoft’s reseller network has started selling SSD kits, with 128GB, 256GB, 512GB, and 1TB options, so there’s even the option to upgrade storage space here. It’s encouraging to see Microsoft make this so easy to do, which makes it far quicker for IT admins to get a machine up and running again.

All of these internal hardware changes also mean that Microsoft has managed to squeeze a bigger battery (46.5Wh to 50.4Wh) inside the Surface Pro 7 Plus. The company now promises 15 hours of battery life, compared to the 10.5 hours on the original Surface Pro 7. I haven’t noticed any drastic improvements in battery life during normal usage, though.

I typically got around seven to eight hours of battery life during my testing, which includes a mix of apps ranging from Chrome, Discord, and Netflix to Adobe Photoshop. If all you’re doing is watching videos, then you’ll probably see closer to Microsoft’s 15-hour promise, but realistically this is still just enough to get you through a regular day of work. I’m still hoping that one day a Surface Pro will reliably hit 10 hours, so I never have to worry about traveling without a charger.

I’m still a big fan of the Surface Pro, despite the lack of design changes. Microsoft is clearly catering to a specific audience here, and the Surface Pro 7 Plus has been built for businesses. I hope that means we’ll soon see a consumer-focused Surface Pro that mixes everything that’s great about the Surface Pro X with the power and performance of Intel’s chips.

Built-in LTE and removable SSDs are great additions to the Surface Pro lineup, but we’ve still been waiting years for basics like Thunderbolt 3 support. And while LTE is a great option to have once again, it’s odd that Microsoft isn’t including more futureproof 5G connectivity. If you’re using an older Surface Pro and looking to upgrade, it might not look like a lot has changed over the years, but these subtle hardware changes do make a small difference.

Microsoft completely redesigned the inside of the Surface Pro this year to include this LTE support and removable SSDs. I’m just hoping a complete redesign on the outside is on the way. It’s still the 2-in-1 to beat, but the Surface Pro could offer so much more.