A lightweight laptop with a sky-high price

The Vaio Z is, speaking pragmatically, a proof of concept.

The second is, at 2.11 pounds, the Vaio Z is the lightest laptop to include an Intel H-Series chip. (That refers to the lightest-possible configuration. I was sent a slightly heavier one at 2.32 pounds.) H-Series processors are high-performance chips most commonly found in gaming laptops and workstations. It’s highly unusual to see one in a thin and light laptop, especially one that’s just over two pounds; machines of this size generally include the lower-powered U-Series.

This model includes the quad-core Core i7-11375H, the current flagship of Intel’s brand-new “Tiger Lake H” series. When announcing the chip at CES, Intel claimed it would offer the fastest single-thread performance on the market, with boost clock speeds up to 5GHz. That’s an impressive prospect, especially in a 2.3-pound chassis.

Our review of Vaio Z 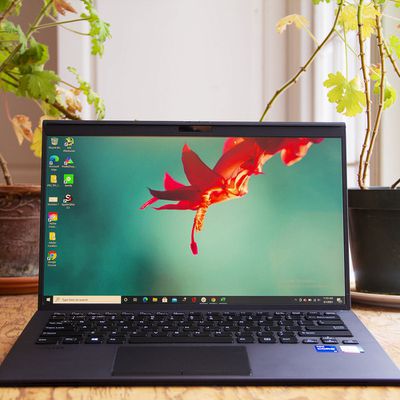 A laptop of that price isn’t a realistic purchase for most people, even if it’s spectacular. So instead, I’m going to use this review to explore two questions that concern the future of the luxury laptop market — questions the Vaio Z is setting out to answer: one, is contoured carbon fiber the future? And two, can a 2.32-pound laptop with an H-Series processor work?

Unfortunately, as of this writing, the answer to both of those questions is “not yet.”

We’ll start with the build. Vaio’s elevator pitch is that the contoured carbon fiber is both stronger than other common materials (like magnesium alloy and aluminum alloy) that other premium laptops are made of, and ideal for combining rigidity with a light build. Carbon fiber also allows manufacturers to tailor stiffness and flexibility to specific regions of the laptop (using the number of layers and direction of lamination). Vaio claims, consequently, the Vaio Z is sturdier and feels nicer than other laptops close to its weight.

Sturdiness and rigidity are difficult claims to verify with a review unit for obvious reasons. Vaio says the Z has passed MIL-STD 10H torture tests, including drop tests, pressure tests, and body-twist tests among others. There aren’t a ton of 2.3-pound laptops out there, and I don’t doubt that the Vaio Z may be objectively better-built than the rest of that class.

But does it feel sturdy? Not really. There’s a significant amount of flex in the keyboard and screen. While I usually have to push pretty hard to get keyboards to bend, the area under the Shift key trampolined with a firm thumb press. The display is so bendy that I was careful when torquing it because I was legitimately afraid of snapping it in half. I know most people aren’t actively trying to bend their laptops, but I would be afraid that putting too much weight on this unit could damage the screen and keyboard over time.

When I initially asked Vaio about this, the company told me that the product is still in the preorder stage, and chassis quality would improve closer to its shipping date. The company later sent me a mass-production model. That the keyboard deck turned out to be a bit sturdier, particularly the area under the shift key. That said, the considerable flex in the screen remains.

The lid and bottom have a plasticky texture

The carbon fiber’s texture is certainly unique. I like the feel of the palm rests, sides, and bottom. But the lid has plasticky texture. I wouldn’t guess that the Z was a $3,500 laptop just from holding it, especially right after holding a MacBook or an XPS 13. The other thing to note is that the whole chassis is a fingerprint magnet — the lid, the sides, the palm rests, the keyboard. I could wipe the prints off easily, but they were always back in abundance after a few hours of use.

The carbon fiber does contribute to one significant benefit, though: the Vaio Z is unbelievably light. It’s so light that picking it up messes with your mind; it’s hard to believe there’s anything inside. This would certainly be the best laptop to buy if you’re looking for the lightest of the light. But if you’re looking for a sturdy, rigid form factor, I’m dubious.

On to the second question: has Vaio managed to put H-Series power in a U-Series form factor?

In a literal sense, yes. The laptop works. And the one thing I do appreciate is the battery life. I averaged six hours and 57 minutes of continuous office multitasking with the display at 200 nits of brightness and Battery Saver on. That’s less juice than I get from the M1 MacBook Pro, but it’s fine as Intel H-Series processors go.

As with other Windows 10 computers, the Vaio Z presents you with multiple things to agree to or decline upon setup.

But in terms of raw power, results are mixed.

I ran several benchmarks to see how this brand-new chip stacks up against some of the more powerful thin systems out there — particularly, Apple’s M1-based MacBook Pro and the Razer Book 13, which is powered by one of Intel’s top Tiger Lake U-Series chips. Note that while both of these models are heavier than the Vaio Z, they’re also less than half its price. So I was hoping it would solidly outperform them under the heavy loads that you’d want an H-Series processor for.

The Z beat the Razer Book in our Adobe Premiere Pro export test by a bit less than a minute — a victory, to be sure, but not a margin to write home about. More disappointingly, it lost to the MacBook Pro by a similar margin on that test. Apple’s laptop also came out ahead in every other test I ran apart from Cinebench’s single-core benchmark. (That’s expected; single-core performance is what Intel claims is so great about this chip.) That’s not a great argument for spending multiple thousands more on the Vaio Z, even with its impressive chassis.

One issue seems to be that the Vaio Z’s 65W charger is insufficient for the types of loads most users would want an H-Series processor for. During several Adobe Premiere Pro exports and several runs of Cinebench multicore, the laptop’s battery drained even though it was plugged in. (Nothing else was running during these tests.) This could be a problem if you’re hoping to run intense loads for long periods of time, especially if you’re not always starting at a full charge. More importantly, it means power delivery may have been limiting the Vaio Z’s performance on these tasks. (Vaio tells me this is by design; it wanted to keep the charger small and portable.)

To Vaio’s credit, the Z has impressive cooling for such a small machine. Neither the chassis nor the CPU ever reached a worrisome temperature. But the dual fans were mega-loud during heavy loads, and sometimes under lighter ones as well. My mom could hear the unit from the next room over while it was running a Premiere export. She told me later that she “thought it was going to take off.”

For the benefit of folks with deep pockets who are considering buying this laptop, I’ll run through the rest of the specs. The highlight is the backlit keyboard, which provides 1.5mm of travel. It’s excellent — comfortable, smooth, and not at all loud. You also get a webcam with a convenient physical privacy shutter, which supports Windows Hello.

Audio is standard laptop fare: it gets impressively loud without audible distortion, but percussion and bass are almost nonexistent. You can swap to “Movie Mode” and “Gaming Mode” in the Dolby Audio software that comes preloaded on the Vaio Z, and I preferred listening to my music on these profiles. They strengthen the background music beneath the vocals and give everything a stronger surround quality.

I wish there was a USB-A

Connectivity includes two USB Type-C ports (supporting Thunderbolt 4, power delivery, and DisplayPort 1.4), a headphone jack, a security lock slot, and an HDMI. I know the Vaio’s space is limited, but I wish there was a USB-A port in there. You also get a nice 3840 x 2160 non-touch display and a roomy touchpad (though it has physical clickers on the bottom, which I always find to be a huge pain).

The Vaio SX12 offers too little for too much

I have two strong opinions about the Vaio Z: one, it’s an impressive feat of engineering, and two, it’s still too expensive.

Vaio’s achievements with contoured carbon fiber are commendable. It’s unusual to see, whether Vaio is the first to do it. And the fact that there’s a 2.32-pound laptop on shelves at all, let alone one housing an H-Series processor, makes me optimistic about the future of the market. It’s been a very cool device to use, one I’m grateful to have experienced first-hand.

But the performance bump the Core i7-11375H delivers in this form factor isn’t enough of an improvement to justify a multithousand-dollar premium over all kinds of more affordable models on the market today, whether they contain M1 chips, AMD chips, or chips from Intel itself. Neither is the contoured carbon fiber — which, while cool, won’t bring a concrete benefit to most customers. At half its price, the Vaio Z would be in the conversation; at $3,579, I’m happy to commend it from afar.

Update March 19th, 12:55PM ET: This article was originally published on March 3rd, 2021, and has been updated to reflect observations from a second mass-production chassis.