A great deal if you can get it

Who is Samsung’s biggest mobile competitor? The first name that comes to mind is Apple, of course. But most people aren’t really in the habit of switching back and forth between iOS and Android with each phone purchase. So who is it?

Samsung is consistently ranked as the biggest phone maker in the world. Huawei is usually number two, largely because of its sales in China where Samsung is a nonentity. And number three right now is Xiaomi.

The reason I bring this up is because Xiaomi’s latest flagship phone, the Mi 11, is not only extremely good in its own right but a phone that arguably outflanks Samsung’s latest lineup. It costs less than the $799 Galaxy S21 in markets where it’s sold, but in many ways, it has more in common with the $1,199 S21 Ultra.

The Mi 11 would be a strong competitor to any S21 phone if you saw the two next to each other in a US carrier store. The only problem is you won’t.

Our review of Xiaomi Mi 11 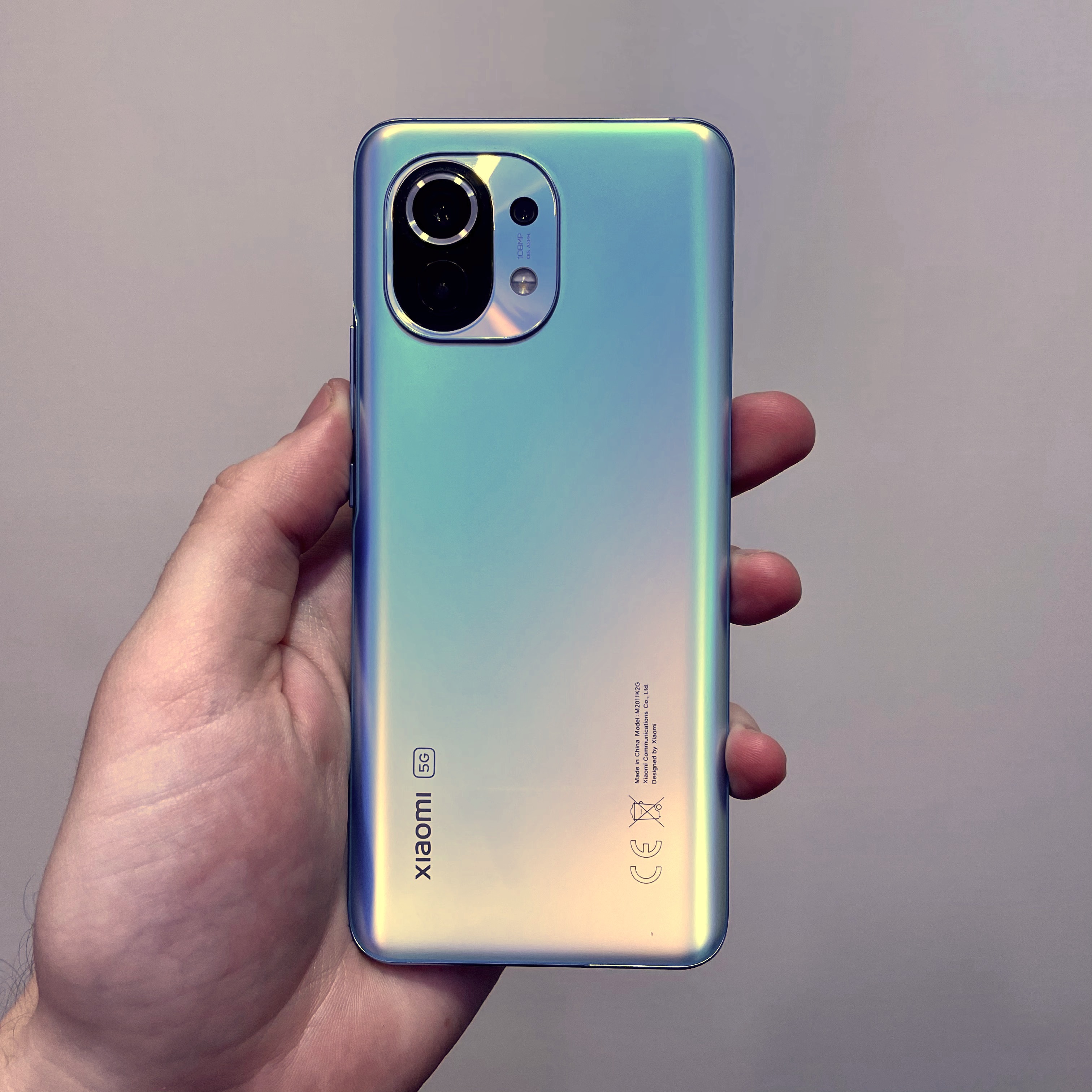 The Mi 11 isn’t particularly exciting to look at, but it’s well-built and solidly designed. It follows Xiaomi’s usual glass sandwich blueprint, with a frosted glass back panel and an iridescent but fairly understated gradient finish. The biggest visual flourish is the squircle-shaped camera bump, which features three distinct layers stepping up to the large primary lens.

With a 6.8-inch screen, this is not going to be a phone for people who prefer smaller devices, but it manages to feel relatively svelte all the same. The slight chin below the display is very thin, and the screen curves gently on the sides. At 8.1mm thick and weighing 196 grams, it’s noticeably thinner and a little lighter than last year’s Mi 10, with a slightly smaller (but still big) 4,600mAh battery.

That may well have something to do with its Snapdragon 888 processor, which is Qualcomm’s high-end chip for 2021; unlike last year’s 865, the 5G modem is integrated directly into the SoC, saving space and power. My Mi 11 review unit pairs the 888 with 8GB of RAM and 128GB of storage, though more expensive models have options for 12GB and 256GB, respectively.

In use, the Mi 11 more than passes the “feels like a flagship” test. As expected based on the spec sheet, it’s as fast and responsive as any Android phone on the market. There’s a strong haptics system, and the Harman Kardon-branded stereo speakers sound good, though I’m not sure they have anything in common with my long-serving SoundSticks. Xiaomi’s MIUI 12 software is based on Android 11, and it’s far more streamlined than earlier iterations; Xiaomi has come a long way with its software design.

Battery life is strong: I got almost exactly five hours of screen time on one recent day of testing, and more than three of those hours involved using the phone to take photos and videos in bright, direct sunlight, all with the screen at its maximum 120Hz and 1440p settings.

That brings me to the display. If the Mi 11’s screen isn’t identical to the much-vaunted OLED panel found in Samsung’s Galaxy S21 Ultra, it’s extremely similar. Both are 6.8-inch curved LTPO OLED panels with a 120Hz refresh rate, a 3200 x 1440 resolution, and a maximum brightness of 1,500 nits. What matters is that the Mi 11’s display is extremely good, which it is. It’s sharp and smooth, with excellent contrast and color reproduction, and the extra brightness is noticeable on sunny days. I know not everyone is a fan of curved screen edges, but these are about as subtle as it gets, and I didn’t have any issues with visual distortion or accidental touch input.

My only complaint about the screen is a weird one: the corners are cut at a more dramatic angle than the edges of the phone itself, resulting in a bezel that intrudes more than it probably should. I’m not sure why Xiaomi designed the phone this way — the otherwise similar Mi 10 didn’t do this — but the effect is quite odd. Still, it’s not something I’ve really noticed since I first started using the phone.

I’ll also add that the optical in-display fingerprint sensor in the Mi 11 is sometimes noticeably slower than what I tend to see in phones from competitors like Vivo and Oppo. It’s rarely inaccurate, but the half-second it normally takes to recognize my fingerprint can sometimes feel closer to a second, and those split-second delays do add up.

One area where Xiaomi seems to have saved money on the Mi 11 is its camera system. The primary sensor is the same 108-megapixel Samsung ISOCELL Bright HMX from the Mi 10, which Xiaomi says it co-developed with Samsung’s component division. It’s backed up by a 13-megapixel ultrawide and a 5-megapixel “telemacro,” meaning there’s no real telephoto capability unless you want to get really close to your subject.

Despite the pedestrian hardware, I’m generally happy with how the Mi 11 cameras perform, particularly considering its price. Detail and dynamic range are strong in good light, with fairly neutral color rendition, and low-light performance also holds up well. The biggest weakness is dim lighting situations that fall between those two extremes, which can get noisy.

The large, high-resolution sensor has its benefits, but there are clear drawbacks. You might value the fact that it offers shallower depth of field (without a portrait mode) than most other phones, for example, but you’ll also have to deal with occasionally busy bokeh or areas of the scene that appear unexpectedly out of focus. And while the 108-megapixel sensor can render a lot of detail, it’s absolutely not a substitute for a telephoto lens; pictures taken at even 2x digital zoom exhibit a lot of artifacts.

I wouldn’t normally even mention the macro lens, which is often a useless 2-megapixel sensor thrown at a phone just so the maker can claim a triple- or quad-camera system, but the Mi 11’s 5-megapixel 50mm-equivalent unit is a little better than most. It actually autofocuses, for one thing, which makes it much easier to capture what you’re trying to see close up. I still don’t feel the need for an extreme macro lens on my phone, but I was at least able to use it to check out the tiny PlayStation icons texture on my PS5 controller. So there’s that.

Overall, the Mi 11 camera system is more than fit for purpose, but it’s also perhaps the only thing about this phone that doesn’t go toe-to-toe with more expensive flagships. The lack of a telephoto lens hurts it, and the last-gen image sensor has its quirks.

My biggest takeaway from the Mi 11 is that Samsung is lucky Xiaomi doesn’t sell phones in the US. The Galaxy S21 starts at a full 100 euros more than the €749 Mi 11, despite having a smaller, lower-resolution screen and a plastic back. The same goes for the S21 Plus.

The €1,249 S21 Ultra is where the comparison gets interesting. Samsung’s highest-end phone is far more expensive, but Xiaomi matches or beats it spec-for-spec except on the battery and the camera. The S21 might be the better all-around phone for people who can afford it, but if I lived in Europe, I know which one I’d consider to be a better value for the money.

That’s the rub, though. At this point, Europe is one of the few places where Xiaomi and Samsung actually compete with one another at the high end. Until that changes, flagship Android phone buyers in the US won’t have much reason to consider Xiaomi part of the competition.

The Mi 11 isn’t a phone so spectacular that I would urge you to jump through import hoops in order to acquire one. It’s just a very good phone that will be an extremely compelling option in any market where it’s sold. If you happen to live in one of them, it has my strong recommendation.

Xiaomi also asks you whether you want to opt in to various settings, including location access, automatic system updates, a user experience program, automatic diagnostic data uploads, and personalized ads. Other system apps will also ask for optional permissions upon first boot; the camera app, for example, asks if it can record location data.

Overall, there are four mandatory agreements and countless optional ones.