Share All sharing options for: Marshall’s Mode II earbuds are stuck between rock and a hard price

Marshall, the British company best known for its thunderous guitar amps, has also managed to build a solid reputation for headphones and earbuds over the last several years. Though they’re a little overpriced for what you get, I like the Marshall Monitor II ANC headphones for their style and clever mini-joystick for controlling audio playback. But now Marshall is moving into the true wireless earbuds market — and it’s very late to the party.

The new Mode II earbuds are priced at $179, start shipping March 18th, and aim to make up for Marshall’s tardy arrival with “phenomenal” sound, wireless charging, IPX4 water resistance, and a design that feels right at home next to the company’s other products. As a first stab at true wireless, these earbuds get a lot right for the price. But that price is also probably their biggest downside.

Our review of Marshall Mode II 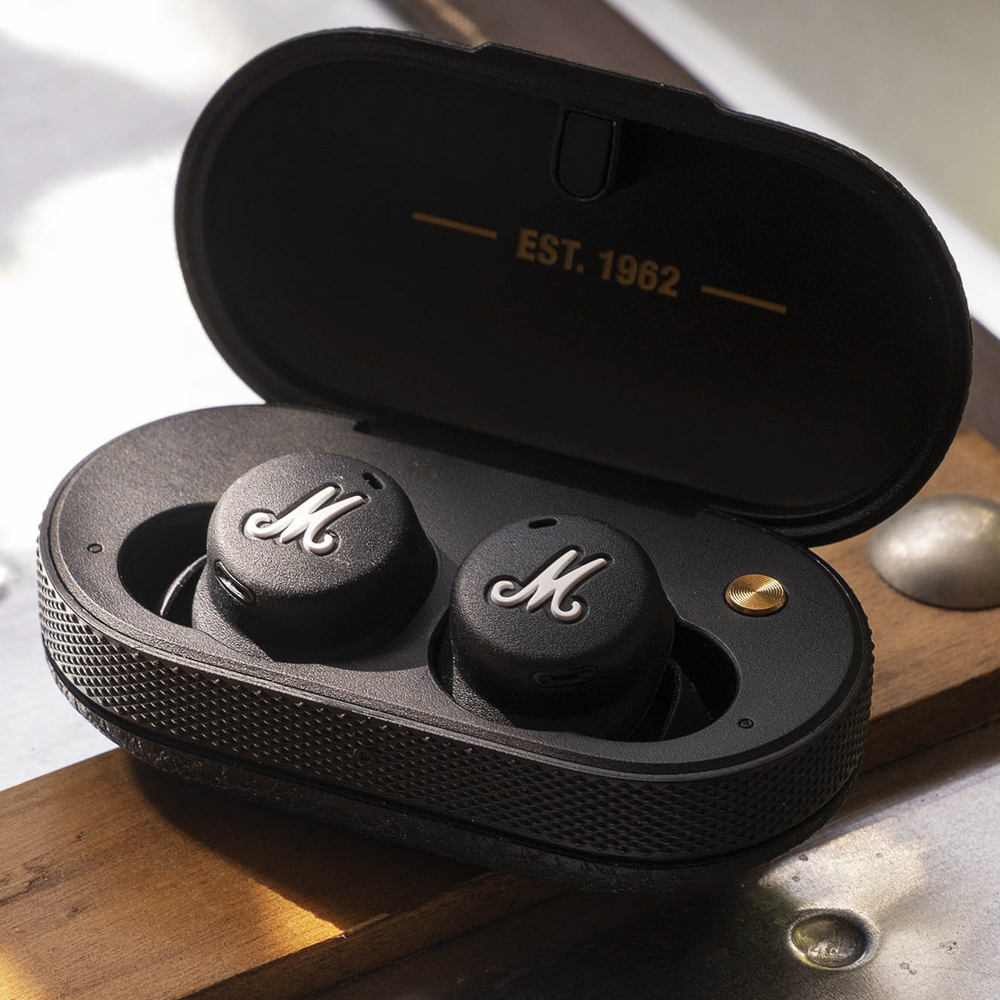 These certainly look the part of Marshall earbuds. The case has the same textured, leather-like finish as the Monitor II headphones with the Marshall logo proudly embossed on the top and a USB-C port on the left side. Open it up and you’ll find the earbuds, three LEDs to indicate charging status for the case and each bud, and a round, gold button inside the case for pairing. Marshall claims the case has enough juice to give the earbuds four full recharges. Since the Mode II can last for up to five hours of straight listening time, that puts you at 25 hours total.

The earbuds have a matte black finish with a very prominent “M” on them; you’re definitely wearing the Marshall brand with these. They’re nicely compact and not as chunky as some competitors like the Jabra Elite 75t. Marshall includes four sizes of silicone ear tips in the box — including an XL option, which is nice to see. Some foam tips would’ve been even nicer.

Marshall’s signature control nub is a little impractical for earbuds, so just like countless others, the Mode II earbuds use tap gestures. The controls aren’t customizable, and unfortunately, you’re left without any way to directly adjust volume:

It would sometimes take a stronger tap than I expected to register some of these commands, particularly with the right earbud. Those firmer taps pushed the earbud deeper into my ear, which got unpleasant.

As with other Bluetooth earbuds, the Marshall Mode II can be used without agreeing to anything in software. But the Marshall smartphone app is necessary if you want to adjust the EQ settings or update the earbud firmware.

By using that, you’re agreeing to:

The final tally comes to no mandatory agreements and one optional.

I’ve also encountered some odd bugs with the Mode II, like one where the right earbud wouldn’t play any audio until I touched it. There were occasionally some noticeable balance / phasing issues with vocals sliding between the left and right earbuds. Those issues both seem to have been mostly resolved with the latest firmware update, but still pop up at times. Marshall tells me another OTA update will be released before the Mode IIs ship to customers to further smoothen out performance.

Bugs aside, these earbuds do sound quite good. I’ve been listening to The Hold Steady’s new album Open Door Policy, and there’s a lot going on in some of those songs. The Mode II earbuds do a good job of keeping everything — guitars, horns, keys, vocals, drums — distinct in the mix. Upper-end frequencies can sound a little boosted on some tracks depending on how they were produced, but it’s nothing piercing. And the Marshall app gives you full EQ control if you’re not happy with the default “Marshall sound” tuning. AAC and SBC codecs are supported.

As always, fit and a good seal are crucial to getting the best sound. And that’s especially true here. Even when I have the XL tips on, these are the sort of earbud that I need to twist into my ear just the right way if I want the most bass and a balanced soundstage. They never feel loose, but something about the fit can be a bit finicky in my experience, whereas I can just plop other earbuds in without giving it much thought.

The Mode II earbuds don’t include any kind of active noise cancellation, but Marshall still added a transparency mode in case you need to more clearly hear what’s happening around you. The best I can say about this feature is that it’s serviceable, but ambient sound comes through far more muffled than the airy, natural transparency modes of other earbuds. Voice call performance is average: people I spoke to could hear me just fine but noted that my voice sounded a bit hollow and trebly — something that was also true when I listened back to voice memo samples.

Rounding out the features, Marshall includes auto-pause when you remove a bud, and they should be suitable for normal workouts thanks to an IPX4 rating. Like the vast majority of true wireless earbuds, these don’t support multipoint for two simultaneous Bluetooth connections. But you can use either one independently.

If the Marshall Mode II buds were priced at $130 or $100, I think I’d come away with a more positive overall take on them. But at $180, they lack any real standout tricks that would make me reach for them over established competitors. The case is sleek, totally pocketable, and includes wireless charging. Sound quality is good, but not to the point where Marshall thrashes competitors in the same price bracket. Plus, you can get a set of true wireless earbuds with proper noise cancellation by spending $30 to $50 more.

Coming into the fold so late, Marshall really needed to turn the knob up to 11. But the Mode II earbuds don’t quite get there, and the style points count for less here than with the company’s wireless headphones, where the cool design is so visible.