A digital medium format vacation, if you will

Hasselblad’s latest digital camera, the 907X 50C, is a 740-gram metal box that can serve as a standalone medium format digital camera or as a digital back for Hasselblad V System cameras made from 1957 onward. At $6,400, it is the smallest digital medium format body Hasselblad has ever made, and it is filled with premium Hasselblad touches. But its responsive touchscreen, all-metal body, and satisfying leaf shutter don’t make up for its slow auto-focus or lack of a viewfinder.

Using the 907X takes patience and practice, but if you are willing to put in the time, the 907X’s 50mp CMOS medium format sensor paired with Hasselblad’s gorgeous color science can create stunning results. 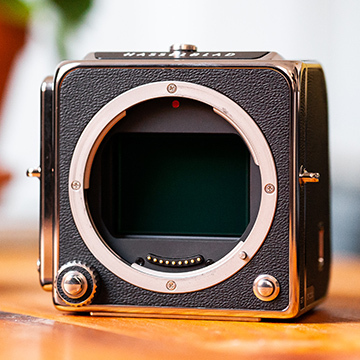 I have gotten so used to the DSLR and mirrorless camera layouts: using my right thumb for most controls and having a firm grip around the battery compartment. Using the 907X is done mostly with the pointer finger, and the lack of a battery grip makes holding the metal box feel awkward and foreign at first. There is a grip you can buy for an additional $729 that provides two additional dials and four buttons along with a small joystick, but I really challenged myself to use the camera without this expensive mod.

There is a battery compartment that houses dual SD card slots on the right side of the camera, a USB-C port with a small door on the left, and the shutter button is under the lens mount around front. On the back, below the 3.2-inch articulating touchscreen, are the flash, headphone, and mic ports, all cleverly hidden under a rubber door. Although all of the ports are covered, Hasselblad makes no claims about the camera being weather-sealed. If you plan on taking this out in any sort of precipitation, you do it at your own risk.

Anyone who has spent time with Hasselblad’s traditional medium format film cameras will likely feel comfortable with the 907X’s layout. Otherwise, using this camera feels like stepping into a whole new world. To start, the lack of a handgrip leads me to support the weight of the camera on my right palm with my left hand gripping the lens.

Next, there is only one dial on the whole system. It runs around the shutter button, which is on the front of the camera. Spin this dial to adjust f-stop or hold down the small button on the right side of the camera while spinning the dial to adjust shutter speed. All other controls are on the touchscreen around the back, which is, fortunately, very responsive and smooth, quite a departure from the first touchscreen experience Hasselblad shipped on the X1D.

Lastly, there is no viewfinder on the base model. As an ode to the waist-level cameras of medium format past, the 907X’s back screen can articulate 90 degrees up so that you are looking down and into the camera instead of through the camera at your subject.

The 907X forces you to use it in a particular way. From the button placement to the lack of a handle to the articulating screen, there is very little about this camera that I was accustomed to. When attempting to take photos walking down the street, for example, I couldn’t just whip the camera up and nab a shot of a passing cyclist or the cool shoes of someone walking toward me. I would have to pull the screen out first, then dial in the ISO on a touchscreen, then adjust my hand to reach the shutter and f-stop dial on the front all before I could snap the shot.

Another speed bump in using the 907X is the focus system. It’s contrast based, and it is slow. When pointing the camera at a subject, the pre-production Hasselblad XCD 80mm lens I was shooting with would hunt for at least a few seconds and often not be able to grab focus at all. If I had a limited window for capturing the scene I wanted, I simply wouldn’t even try because I knew I was likely to miss it. For me, missing the shot is more frustrating than just not trying in the first place.

This was incredibly difficult to adapt to at first. I spent the first few days with the 907X constantly feeling like I missed the shot, that I wasn’t moving quick enough. And then I put the camera on a tripod, and I realized why it didn’t need a handle and why it isn’t in the hands of street photographers. This camera is not for the quick take; it’s for the thought-out, the particularly placed, the well-crafted shot. This camera does not chase the moment; it invites the moment to come to it.

It is worth noting the 907X has one of the simplest menus, especially compared to the byzantine and terrible menu systems of Sony. There are five physical rubber buttons under the 3.2-inch touchscreen, but otherwise, navigating the camera’s menu system is done completely by touch. The main menu consists of 11 vectored icons that lead to deeper settings. It’s all very intuitive and responsive.

The magic of the 907X is in its 50-megapixel CMOS medium format sensor, which is capable of capturing 8272 x 6200 pixels. It’s larger than a full-frame camera’s sensor, but not quite as big as if you compared it to a medium format film camera. It’s also getting up there in age: it’s effectively the same image sensor Hasselblad has been using since at least 2018’s X1D.

The 907X with the 80mm f/1.9 lens produced the sharpest images at around f/5.6 to f/11, but the amount of depth you can isolate at f/1.9 is truly stunning. Although you can capture both Hasselblad 3FR RAW files and JPEGs, I like the colors from the JPEGs more than the flat profiles of the RAWs, even when I was editing them later on my computer. Hasselblad’s color science is truly remarkable. In particular, the red hues this camera captures are incredibly vibrant yet not over the top. I ended up seeking out red objects to take photos of, simply so that I could be amazed by how true to life the 907X could reproduce them.

The 907X can shoot from ISO 100 to ISO 25,600. The image gets grainy once you cross ISO 6,400, but it’s a smooth grain that has a nice texture to it like film. I also took it out one night on a tripod and let that shutter sit open on still objects. The level of detail this sensor can capture never gets old, which led me to constantly zooming into the photos I had taken once I brought them over to my computer.

Video can only be captured in 2.7K, 29.97fps or Full HD, 29.97fps on the 907X. The camera also crops the image to 16:9. As a huge 4:3 ratio fan, this makes me very sad, especially considering how many pixels are not being used with the 16:9 crop. However, the video is crisp and holds on to that great color science. But for many reasons, this is not a video camera. It’s almost weird that Hasselblad even included the ability to shoot video at all.

First, there is absolutely no in-body stabilization, so when shooting handheld, you can see every shake, breath, and focus pull. Next, there is no continuous autofocus in video mode and certainly no face detection in either the photo or video modes. But more importantly, that lack of video frame rate and resolution options leads me to believe this camera’s video capabilities are for making GIFs or grabbing a quick video reference. Tune into our video review of the 907X for a sample video shot.

I also don’t think the battery life could support consistent use of the 907X in video mode. While casually taking photos all day, I was only getting through about half a day of shooting before needing to swap in another battery. And while you can recharge the battery via the USB-C port on the camera, I can’t imagine owning this camera and not also owning at least two additional batteries, which cost $99 each.

This premium sensor, sleek design, and brand name don’t come cheap: the Hasselblad 907X 50C starts at $6,400. For $3,000 less, the Fujifilm GFX 50R has effectively the same sensor in a more traditional-style mirrorless body. You really have to be in love with the Hasselblad brand or the desire to use this as a digital back for a Hasselblad V system camera in order to justify the 907X’s price tag.

It’s that expensive price, the lack of any real handgrips, and the complete lack of weatherproofing that made me fear using this camera out in the world. I wholeheartedly believe it belongs in a studio that it will rarely leave, on product shoots where the goal is to make a viewer feel as though they can reach into the frame and grab an object, or in the hands of a much more cautious photographer.

The Hasselblad 907X 50C couldn’t be my daily driver, but it would be a sick camera to keep in the garage for those slower or gorgeous drives.