And they have a surprisingly great app

It is increasingly hard to stand out in the wireless earbud market. You can find a pair of earbuds at nearly every price point with a range of different features sprinkled throughout. Being within a particular ecosystem, such as AirPods for iOS users or the Galaxy Buds Live for Samsung’s users, is an easy way to choose earbuds that are right for you. Anker doesn’t exactly have a phone of its own to sell alongside its Liberty line of earbuds, so its strategy is to deliver desirable features at a competitive price.

The $129.99 Soundcore Liberty Air 2 Pro buds do a lot of things well, but so do a lot of other earbuds at this price. It’s their competitive active noise cancellation and well-designed app that helps them stand out. 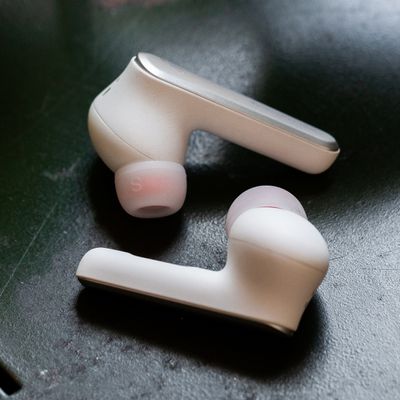 The buds themselves are the same stemmed design with a silicone ear tip as Apple’s AirPods Pro. (I guess the name isn’t the only way Anker took inspiration from Apple.) The Liberty Air 2 Pro have a gold fan-like cover over their speakers, which serves no purpose other than looking cool, and a textured, matte finish. They come in “onyx black,” “titanium white,” “sapphire blue,” and “crystal pink.” Included in the box are nine different-sized silicone ear tips, ranging from XXXS to XL, to create the best seal and hopefully keep movement in your ear canal from happening.

Fit is extremely important in earbuds, not only for ANC but also for the best sound quality experience, especially in the lower frequencies. To confirm you have chosen the best-sized tips, Anker has a Tip Fit Test within the Soundcore app. The app plays about 10 seconds of ringtone-esque orchestral music, then displays a “good seal” or “bad seal” result for each earbud. (Yes, it’s basically just like what Apple does with the AirPods Pro. Inspiration.)

There is also an audio test called HearID that claims to map your personal hearing sensitivity at multiple frequencies to best tailor the EQ settings for you. It plays about 30 different tones per ear and asks you to confirm if you can hear the tone or not. Next, you are presented with a graph of your results and an EQ preset saved to the app. My test resulted in deep bass and less treble, which did make my music sound fuller.

Both the fit tests and EQ settings test are something several other earbud makers are doing these days, and although not everyone finds these tests useful, I appreciate having the option.

The case, large and almost stone-like in appearance, slides to open and close with a satisfying click. It most closely resembles the case of the Galaxy Buds Pro — it’s longer than it is tall — but its larger size makes it not as pocketable as most earbud cases. There are three battery indicator lights on the front and a button for pairing around back. That may sound like a small detail, but I’ve come to really appreciate earbuds that have a physical button for pairing. It’s far easier to use than tapping the earbuds to pair like you have to on the Jabra Elite 85t.

Like most earbuds, the Air 2 Pro have tap controls when you’re wearing them: double-tap on the left bud to skip the next track, double-tap on the right for play and pause, or hold down for two seconds on either bud to toggle ambient sound modes. It’s great that the buds respond quickly to my taps, but I’m frustrated by how limited the controls are. All of them can be customized in the app, but I wish there was a single-tap or even triple-tap option.

Either bud can be used independently of the other, and in-ear detection can be toggled on and off in Anker’s app. Take an earbud out of your ear, and your music will stop; put the bud back in your ear, and it will resume. The in-ear detection was a bit sensitive for my liking. When I had a hood on, for example, every time the earbud was knocked by my hood, my music would pause even if the bud was still seated in my ear. A quick readjustment of the bud would get my music playing again but ultimately turned off the in-ear detection feature entirely.

The battery life is on par with other ANC earbuds. Anker claims seven hours of battery life with ANC turned off or six hours with it turned on. There are three additional charges in the case, which can be recharged wirelessly or via the USB-C port on the back. This was more than enough juice to get me to the point of my ears needing a break from the buds’ tight, in-ear seal. There is also 15-minute fast charging that can get three hours of listening time when the case is plugged into an outlet via USB-C.

The Liberty Air 2 Pro support SBC and AAC audio codecs. They have 11mm drivers that create a more treble-heavy sound. While music felt full and immersive with crisp separation, I often wanted more bass. Lifting the lows in the app’s EQ helped, but it wasn’t as clean-sounding as the bass in the AirPods Pro. 1970s funk and soul sounded great, but more contemporary R&B felt a bit flat.

I was most impressed with the active noise cancellation on the Liberty Air 2 Pro. Outside of Amazon’s Echo Buds, there really aren’t many options at this price that even include it, much less do it well.

The Air 2 Pro have three ambient sound modes: full noise cancellation, transparency mode, and normal. Within the full ANC and transparency modes, there are more specific controls for managing the levels of passthrough sound. You can enable a Transport mode for canceling low-end frequencies, such as train rumbles; Indoor mode for midrange frequencies; an Outdoor mode that Anker claims is best for city spaces; or build a custom mode for dialing in the best setting for you. I set my ANC to Transport and left it there for most of my time and found it comparable to the ANC in the Jabra Elite 85t, a set of earbuds that costs $100 more than Anker’s.

The noise cancellation let the outside world fade away, but it wasn’t as isolating as the AirPods Pro or Galaxy Buds Pro. And although the transparency mode is serviceable, it doesn’t have the same earbud-less feel of the AirPods Pro either. There is a Vocal transparency mode that takes out lower frequencies while allowing higher frequencies, such as voices, through. It was helpful when listening for train announcements, but ultimately, taking an earbud out to hear an announcement was far easier.

You can pair the Liberty Air 2 Pro to your phone over Bluetooth without agreeing to any terms of service. But if you want to use the Soundcore companion app, you’ll have to agree to Anker’s:

If you use the HearID function to customize the sound profile for your ears, you’ll need to give the app permission to record audio on your phone.

Most apps for wireless earbuds are so bad that I open them once to set EQ settings and some custom touch controls, and that’s it. The Soundcore app had me coming back to it time and time again, though, mostly to play with all of the different controls it offered.

When I was bored on the train, I would open the app and start testing out all of the transparency modes while strangers spoke to each other across the car. I also had fun turning the EQ settings up and down. The app is filled with pleasing colors and is easy to navigate, which is surprisingly rare in the earbud market.

In a wireless earbud market full of worthy (and not so worthy) competition, it is increasingly hard to be impressed by a new pair of buds. But the competitive $130 price tag of the Soundcore Liberty Air 2 Pro brought me in, and their true active noise cancellation and well-designed app kept me coming back for more. They could certainly use a bit more bass and a smaller case, but Anker has made a pair of wireless earbuds that bridges the gap between a more budget-friendly option and a reliable, all-around great earbud that I was excited to put into my ears every day.