Share All sharing options for: Microsoft’s Xbox Wireless Headset is a mic-drop moment

Microsoft’s new $99 Xbox Wireless headset isn’t perfect, but it’s the best attempt at being an Xbox gaming headset and an everyday set of wireless headphones I’ve tried yet. It’s compatible with the Xbox Wireless protocol, making it easy to pair with any Xbox One or Xbox Series X / S console. It’s also compatible with Bluetooth (version 4.2, SBC codec), and better yet, it can connect through both protocols simultaneously. So you can take a call or have audio from any app come through from a phone, tablet, or a PC mixed in with the sound coming from your Xbox console.

This is far from the first gaming headset to do this, or even do it well. Microsoft’s latest headset just stands out as being particularly impressive for the number of things it gets right for $99. Its design is stellar, a logical fit in the company’s headphone lineup. Next to the Series X, it looks the part with a touch of glossy green detailing around the ear cup dials, covered in matte black plastic. The little holes in the recessed areas between the faux leather ear pads and the dials seem to be there just for cosmetic reasons, but it looks fantastic nevertheless. 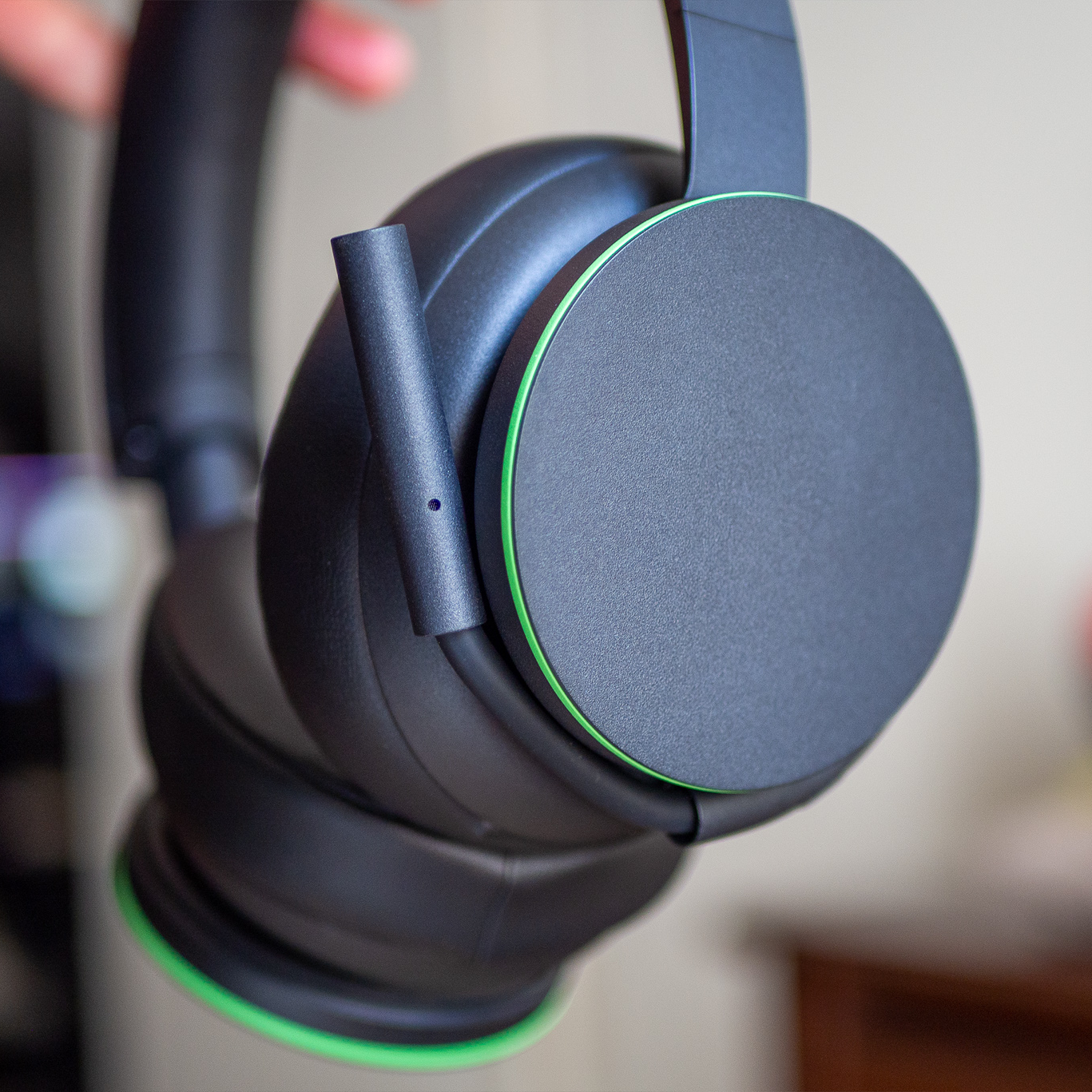 Crucially, these are comfortable, even though my head size nearly pushes them to their size limits. The sidearms require two hands to make adjustments, which I like. There’s no worry that they’ll resize just from being moved around. And while I wish this model had a bungee-style headband and swiveling ear cups like most SteelSeries headsets, not having these features didn’t equate to comfort issues here.

In addition to how the headset looks, its functionality is similar to the Surface Headphones, with twistable dials on the outside of each ear cup for adjusting elements of the audio. Unlike the company’s more premium headphones, there’s no active noise cancellation here (I’d complain, but they’re $99), though the passive noise isolation is better than average for this price. The left dial acts as a chat and game audio mixer, so you can tune your playmates down a bit during a dialogue-heavy cutscene or vice versa. I appreciate that Microsoft put it front and center. On the other dial is the volume control. Twist to increase or decrease, nice and simple — no buttons necessary.

Over on the right ear cup, there’s a USB-C port for charging. Microsoft includes a USB-C to USB Type-A cable to charge it, but you’ll get all of the same headset features if you plug into a Windows 10 machine with your own USB-C to USB-C cable. That’s not the case when plugged into a MacBook Pro, which won’t work over a wired connection with the headset. You can still connect to a macOS device and use the headset over Bluetooth, though.

There are only two buttons on the headset: one to manually mute the bendable microphone (an LED on the inner section of the boom microphone angled toward your face is illuminated when the mic is hot), and another that serves as the all-in-one pairing and power button, both of which reside on the left ear cup. Most gaming headsets require days of continued use to fully learn their respective button layouts, but this one’s dead simple. I would have taken one more button if it served as a multifunction button to control my device over Bluetooth, but Microsoft has limited the headset to just two buttons. There’s no way to independently control, say, a phone outside of just adjusting the volume.

The sound performance from this headset is better than I expected. During my tests, I listened to Spotify, and the music sounded good enough to stick with this headset instead of automatically reaching for my Sony 1000XM3s. People with a knack for stellar audio quality will find quibbles, like that the sound can come off as muddled at times, and the soundstage isn’t as expansive as you’d find in a more expensive set of headphones. But again, these are $99 and meant for gaming first. And for that price, I’m pleased.

Hopping over to gaming, I instantly booted up Doom (2016) on the Series X. The soundtrack and all of the various hellish sound effects have an adequate amount of crunch and punch, and I was head-banging to the music while I played. It sounded as it was intended to sound, though, again, the same nitpicks apply here as they do for music. When there’s a lot happening in the mid and high frequencies, the sound can lack clarity if you’re listening closely. I didn’t notice that as much in Yakuza: Like a Dragon, for instance. This headset works with the Dolby Atmos (Microsoft is giving buyers a trial of Dolby Atmos with purchase that will last until the end of September) and DTS: X paid apps available for Xbox and PC, which might enhance the sound. But for the purposes of this review, I tested just the out-of-the-box experience.

The battery life and range are competitive with other gaming headsets I’ve tested in this price range. Microsoft claims 15 hours per charge, and both times I ran the non-replaceable battery down during testing, it lasted for about that long. I was able to roam about my studio apartment, straying about 25 feet or so from the Xbox without experiencing any drop-outs. It started cutting out when the signal had to go through multiple walls, but that’s to be expected. As for charge speeds, Microsoft says it can gain four hours of use out of a 30-minute charge, or a full charge in three hours. In case you were wondering, you can use the Xbox Wireless headset while it’s being charged, but obviously, it’ll then take longer to recharge.

To give you a sense of how this headset handles connections, I first paired the Xbox Wireless headset to my PC with Microsoft’s USB Wireless Adapter (not included with this headset, but it operates on the same Xbox Wireless protocol as the consoles) for music and to take some video calls. Pairing the headset required pressing and holding the pair button for four seconds and doing the same to the Wireless Adapter. To use them on the Xbox Series X, I had to run through the same process. Frustratingly, the headset can’t handle juggling between two previously paired devices that use the Xbox Wireless protocol, so I had to manually re-pair it when I wanted to hop between my PC and the Xbox. I don’t want to overblow this issue, though. Microsoft’s pairing process for Xbox accessories is very simple. This won’t be a problem at all if you connect to your PC via Bluetooth (as I imagine most people will) since the headset can connect to both concurrently.

If you’re someone who’s likely to lean heavily on the concurrent wireless connection feature, I like that this headset automatically lowers the audio streaming from the Xbox Wireless protocol device when a call is incoming so you can hear it. You can adjust the volume of just your Bluetooth device with its own controls, but not from the headset itself. Cranking the volume with the dial makes it louder for both devices you’re connected to.

The level of customization this headset allows is also impressive for the price. Through the Xbox Accessories app for Windows 10 or Xbox, you can adjust the equalizer (movie, music, game, heavy bass, and speech are the presets, or make your own) and boost the bass. Additionally, there’s an auto-mute feature that can mute noises happening in your surroundings. There are three levels (low, medium, and high), and Microsoft says each step up will increase how aggressively the mic mutes things that aren’t your voice. During a video call, it seemed to work as intended, if not better than I expected. The person on the other end said that my speech wasn’t getting cut off, which is something that can happen with these kinds of features, and that happenings in the background weren’t noticeable. Of course, the effectiveness of this auto-mute feature can vary depending on your household situation. If you’re skeptical, it’s easy enough to just tap the mute button to avoid potential embarrassment.

Two other small but cool features in the Xbox Accessories app let you tweak how bright the mute light is, making it easier to see in your peripheral vision. You can also customize the level of mic monitoring or how much outside sound is fed through the mics and then funneled into your ears.

Up until now, the $150 Razer Kaira Pro was the Xbox-specific headset I told people to get because it’s comfortable, and it supports Bluetooth in addition to the Xbox Wireless protocol. Microsoft’s new Xbox Wireless headset is well ahead of that model in terms of design, ease of use, and functionality — all in a more affordable package.

If Microsoft is to be judged compared to Sony on how well it designed a headset to accompany its latest consoles — as it inevitably will be — this one handily edges out the Pulse 3D even though they’re the same price. Sony’s model is comfortable and looks equally dashing next to the console it was made for, and it has a 3.5mm headphone jack and 3D Audio support in its court.

But it’s tough to compete with the Bluetooth support and button-lite design built into Microsoft’s model. I would have loved it if a USB dongle was included for more support with devices, like the Nintendo Switch. But by design, it can’t connect to other gaming consoles. Microsoft is keeping this one in the family. If you’re in the family, though, you’re in for a treat.

Correction: The Xbox Wireless headset can get four hours of use from a 30-minute charge. This review incorrectly stated that a 15-minute charge could get you three hours of use. We regret this error.