Functional but could be better

This year, multiple companies primarily known for gaming laptops have been branching out into the portable business and productivity sector. It’s a crowded field already, but Razer made quite a splash with its excellent Razer Book 13, which has an elegant chassis, a 16:10 screen, and just a touch of its company’s signature RGB lighting.

In this review I’m looking at the Summit Series, which is MSI’s attempt to enter the same space. The series includes the Summit E line — which includes discrete GPU options and is priced to compete with top dogs like Dell’s XPS 15 — and the Summit B line, which starts at $999 and sits squarely in the midrange market.

Our review of MSI Summit B15 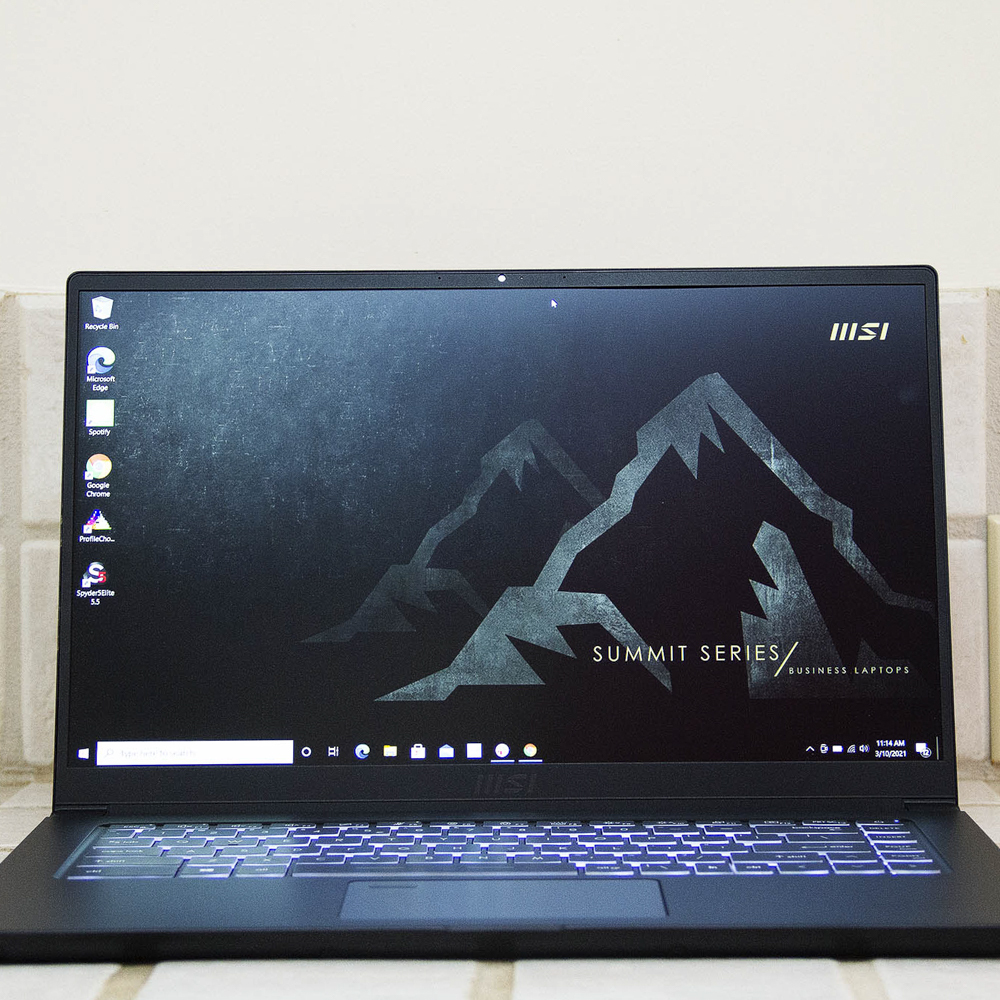 The most appealing facets of the Summit-Series laptops are their look and build. They have a smooth black finish, an aluminum build, a classy backlit keyboard, and a lustrous new MSI logo on the lid and bottom bezel (no dragon to be found, a first for MSI). MSI claims the B15 has “military-grade durability,” and while that’s a difficult claim to test, there’s very little flex in the B15’s lid and keyboard. And at 3.53 pounds and 0.67 inches thick, it’s light for its size.

All in all, though, the B15 has a bit of a utilitarian look, especially compared to the E15. The latter has some small flourishes that add up to a classier vibe — there are gold accents around the touchpad and edges of the hinge, for example, where the B15 is straight black. One other thing about the B15’s chassis — it’s one of the worst fingerprint magnets I’ve ever seen. Touch the lid one time, and a visible smudge will remain. I used the sides of my fists to reposition the laptop while taking photos and still had to wipe it down between shots.

Don’t get me wrong, it’s a nice-looking and nice-feeling chassis. But there’s nothing exciting about it, and you’ll be wiping it down a lot if you want to maintain a clean look.

The useful port selection is a highlight, given the thin chassis. It includes a USB-C (supporting Thunderbolt 4, power delivery, DP 1.4a, and USB 4.0), two USB-A 3.2 Gen 2, one USB 3.2 Gen 1, one combination audio jack, one microSD reader, and one HDMI jack, in addition to the barrel-plug power port. You also get an RJ45 Ethernet dongle in the box, which is handy. I also appreciate having USB-A ports on both sides.

I also like the keyboard backlighting, which looks quite classy and wouldn’t be out of place in an office setting. The keys have a nice texture and 1.5mm of travel. Three nitpicks to note: First, the Fn key is half-sized, and I found it a pain to hit. Second, there was occasionally some internal rattle inside the deck, which was annoying. Third, the keys are more mushy than they are clicky, and they’re a bit shallower than the best keyboard keys around. Subjectively, I made more errors on this keyboard than I normally do.

MSI Summit B15 specs (as reviewed)

The display, similarly, is functional with caveats. It covers 98 percent of the sRGB gamut and 76 percent of AdobeRGB, and it maxes out at 258 nits. That’s an acceptable range of color coverage and is functional enough for office use, but it’s too dim to use easily in bright settings. I would expect more from a $1,249 laptop. Additionally, it uses a 16:9 aspect ratio, which is falling out of fashion among premium business laptops for a reason — it’s cramped for multitasking purposes.

The one component I really don’t like is the touchpad. It’s a bit small for a 15-inch laptop, and I sometimes hit the fingerprint sensor (built into the top-left corner) and the top plastic as I was scrolling. It also isn’t the smoothest I’ve ever used, and my fingers would skid across it a fair amount. Both the material and the click feel a bit plasticky compared to what you might find in a nicer model.

The Summit’s performance is good. I didn’t encounter any problems while running it through my usual office work. The integrated Iris Xe graphics aren’t suitable for serious gaming but can run lighter fare if that’s your thing. I could occasionally feel the system chugging under the keyboard while doing more intense tasks, but it never got too loud or too hot. You can swap to the “Silent” cooling profile in MSI’s control panel if fan noise is bothering you.

AGREE TO CONTINUE: MSI SUMMIT B15

To start using the MSI Summit B15, you’ll need to agree to the following:

That’s seven mandatory agreements and 12 optional agreements to use the Summit B15.

With that said, two disappointments came out of my testing period. First, the audio from the B15’s two speakers isn’t terrible and works just fine for video calls, but it delivers tinny percussion and practically no bass. I also heard occasional distortion at maximum volume, though I could eliminate it by bumping the sound down a notch. My test unit’s microphone also wasn’t working on Zoom calls initially. It turned out Zoom had the wrong device set as the default input. If you run into this problem, clicking “Test Speaker and Microphone” before joining your meeting should resolve it.

Second disappointment: the battery life. Running the B15 as my daily driver at 200 nits of brightness, I only averaged five hours and 13 minutes. This isn’t entirely unexpected, as it only has a three-cell 52Wh battery — similar to what some 13-inch laptops come with at this point. On this 15-inch laptop, it’s not enough to power you through a full day if your workload is similar to mine (around a dozen Chrome tabs, Slack, occasional Zoom call, that sort of thing). One thing to note is that the B15 comes loaded with Norton, which I’ve seen be a serious battery drain in the past. I ran a battery trial before uninstalling that software and only got four and a half hours. After I nuked the bloatware, the B15 got closer to six.

All told, the Summit Series is a fine first step for MSI. In a market where business-focused laptops commonly cost multiple thousands of dollars, there’s absolutely an audience for something like the B15, which is light, attractive, and functional for just over the $1,000 mark. It looks and feels like a laptop you’d bring to a business meeting, and it has a top Intel processor with cooling that can handle it. Professionals on a budget could certainly do worse.

But given the unremarkable audio, battery life, and the other areas of the chassis, I still think that people who are willing to spend a bit more will benefit from doing so, especially folks who can live with less RAM and storage. A better screen, better speakers, and better battery life can make a big difference in the daily experience, and while the B15’s nice chassis, plentiful storage, and business-specific features are worth a premium for some folks, they won’t be everyone’s top priority.

Update March 15th, 4:29PM: This story was updated to include a resolution to an issue that I initially faced with Zoom audio.