The Kensington StudioDock turns your iPad into a tiny iMac

Share All sharing options for: The Kensington StudioDock turns your iPad into a tiny iMac

There are a lot of iPad keyboard cases out there that aim to turn Apple’s tablet into a laptop, but the Kensington StudioDock is something altogether different: it turns your iPad Pro into the world’s tiniest iMac.

This is a serious accessory for people who are serious about iPad productivity. (Yes, they exist.) It’s a dock that lets you use your USB-C-equipped iPad Pro or Air in portrait or landscape orientation while giving it a whole lot more connectivity. Basically, if you ever sit down and work at your desk with an iPad Pro, the StudioDock could be for you.

Our review of Kensington StudioDock 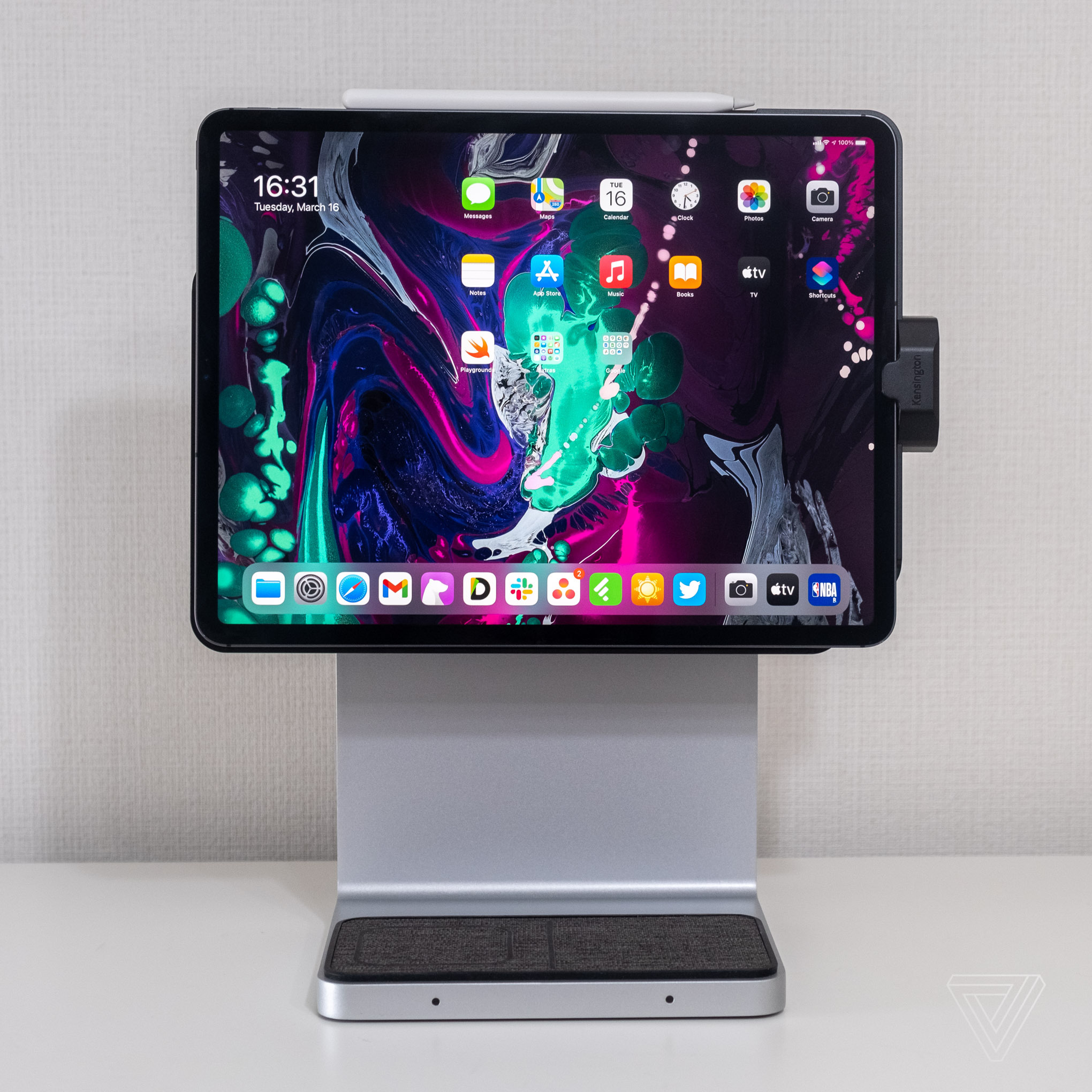 The StudioDock is mostly made from aluminum and is sturdy enough that you can adjust the iPad’s position without it moving on your desk, making it easy to switch between portrait and landscape modes or tilt the vertical viewing angle. (An iPad Pro in a StudioDock in portrait mode is a great Zoom device, for example.) The build quality of the stand itself is solid, though the plastic back panel does feel a little low rent.

On one side of the dock you’ll find a USB-C port and a power button, while the other has an SD card slot and a headphone jack. Around back there’s a barrel connector for power, three USB-A ports, an HDMI port, and a Gigabit Ethernet port. There are also two 7.5W Qi wireless chargers integrated into the stand’s base, and (of course) two Kensington security locks. The iPad Pro connects over USB-C and slots onto a magnetic plastic panel that helps support the jack; the dock is available for 11-inch and 12.9-inch iPads, though the size of the magnetic panel is the only thing that’s different between the two versions.

Once your iPad is connected with a keyboard and trackpad or mouse hooked up, it’s like having a little desktop computer with a touchscreen — and way more ports than most Mac laptops these days. It’s really quite adorable, if you find things like the idea of wired internet connectivity on a tablet adorable.

Even if you aren’t using a bunch of accessories, the StudioDock is more comfortable to use at a desk than a laptop simply because it raises the display to a better angle. I’m reminded of a recent New Yorker cover showing a woman at home with her laptop precariously perched on a pile of books. Laptop stands exist, obviously, but not everyone wants to use them, and I like that the StudioDock means you’re not stuck with a redundant keyboard and trackpad.

A crucial element of this product is that it’s easy enough to move the iPad to and from the dock. It’s still slightly fiddly and in a perfect world I’d want the StudioDock to use the Smart Connector, but since no-one other than Apple and Logitech has ever released products that actually do use it, I assume Kensington had its reasons — bandwidth no doubt among them. One benefit of this design is that it charges the iPad very quickly at 37.5W, so I haven’t had to think about charging it any other way at home.

Kensington also sent an Apple Watch charger that attaches to the USB-C passthrough port. It’ll be sold separately after the StudioDock is released. I found it a little plasticky, like the dock’s back panel, but it worked fine. I already make use of an Apple Watch desktop charger every day so I didn’t see much need for this, but if you don’t yet have one then this would be a convenient add-on.

The wireless chargers, meanwhile, are also a nice addition. You won’t get the fastest speeds out of them, but the ability to charge a phone and AirPods throughout the day is useful and saves space on your desk compared to separate pads. I did notice a slight coil whine noise when devices were fully charged — this isn’t all that uncommon with wireless chargers, but not all of them do it, so it’s worth noting that this one does.

The StudioDock’s HDMI port supports 4K monitors at 60Hz and should be ideal for iPad dual-display setups, but the software isn’t really there yet on Apple’s part. Only a few apps let you show different content on each monitor — the rest of the time you’re dealing with a pillarboxed mirror of your iPad’s 4:3 screen. (One clever way to get around this is an app called Shiftscreen, which is basically a browser that lets you run up to four web apps across two displays — useful for things like multitasking in Slack and Asana.) I’d personally need iPadOS to get much better external monitor support before I went all-in on an iPad desktop setup, but if you’re used to using a laptop by itself, the 12.9-inch iPad Pro should be big enough for most tasks.

That’s how I used the StudioDock most of the time, and it was generally a great experience. I really like the trackpad support that was added to iPadOS last year, and it’s great to be able to combine that with a wired mechanical keyboard and still have a ton of connectivity options. I will just say that I would generally rather use the StudioDock than a laptop balanced on a pile of books.

The StudioDock is plainly a niche product, and it does have its quirks. But for the most part, Kensington’s attempt to morph the iPad into a desktop computer actually works. You’d have to be really into the iPad-as-work-machine lifestyle for this to make sense for you, but the StudioDock and iPad Pro combination is a fast, fun computer that does most of what I want it to.

My biggest hangup is the price. It costs $399.99 for the 12.9-inch iPad Pro version, or $379.99 for a model that fits the 11-inch iPad Pro and the 10.9-inch iPad Air. That’s clearly a lot of money to invest into a third-party peripheral — it’s more than some iPads cost alone. And I’d worry about whether it’d work with any future iPad Pro designs, considering the current Pros haven’t had a significant update since their introduction in 2018.

Those are some pretty big caveats, but if you can get over them, the StudioDock is a great way to work on an iPad. It turns the tablet into a more comfortable, capable, and flexible computer, and I just hope Apple’s software evolves to make this kind of use case even better.