Portability and performance, for a price

Share All sharing options for: Lenovo ThinkPad X1 Nano review: light it up

If you’ve used a ThinkPad before, you probably know 90 percent of what to expect from the ThinkPad X1 Nano. All of the staples are here. It’s got the black carbon fiber chassis, the discrete buttons on top of the touchpad, the mechanical privacy shutter, the ThinkPad logo on the palm rest, and (of course) the red pointer nub in the middle of the keyboard.

But one thing is unique about the X1 Nano: it’s the lightest ThinkPad Lenovo has ever made. Starting at just 1.99 pounds, the Nano isn’t technically the lightest laptop on the market. But it’s still one of the best combinations of portability, build quality, and performance that you can buy.

Lenovo has made a few other useful tweaks as well, though they’re not tweaks you’ll necessarily notice when you’re looking at the machine. There’s not much to overthink here: it’s a smaller, lighter ThinkPad. Lenovo didn’t reinvent the wheel, but the updates it made succeed in keeping the Nano current among its rapidly innovating peers. 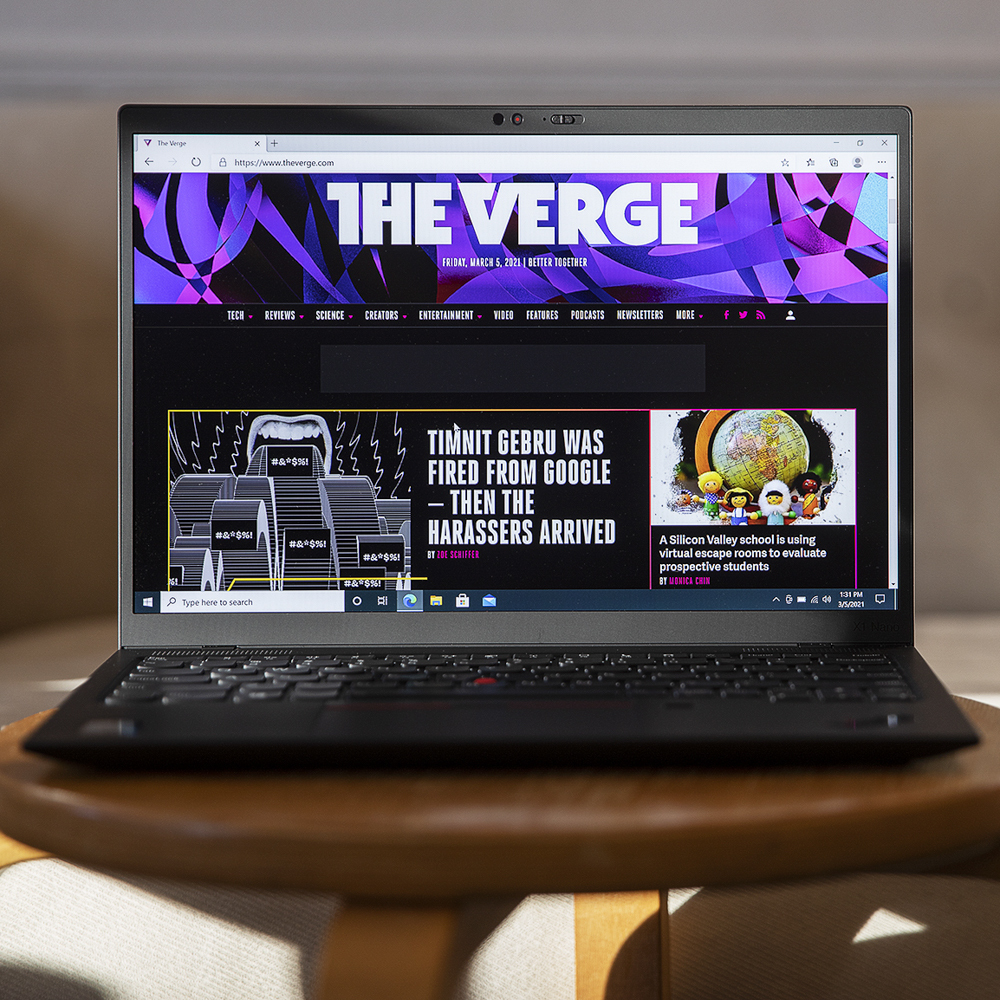 Here’s what’s new with the Nano, in addition to its lightweight build. It has a 16:10 screen, a feature that a number of this year’s ThinkPads are adopting for the first time. It has a new 11th Gen Intel processor, and it’s certified through Intel’s Evo program (which is the chipmaker’s way of verifying that a laptop includes its latest features like Thunderbolt 4, Wi-Fi 6, instant wake, and fast charging). And there are a few enhanced security features, including a match-on-chip fingerprint reader and a dTPM 2.0 chip, which will mostly be notable for business users.

What looms over that verdict, of course, is the Nano’s price. Technically, it starts at $2,499 and maxes out at $3,719. The good news is that Lenovo’s products are very often heavily discounted, and the current sale prices at the time of publish range from $1,149 to $2,231.

The Nano is highly customizable

You’re paying a premium for the Nano’s weight and the extra business features. A comparable Dell XPS 13 to my test model, for example, is $1,599.99 and 2.64 pounds (over half a pound heavier than this unit).

That said, the Nano’s weight is astounding. I feel like I’m carrying nothing while I’m holding it, even one-handed. I’d easily haul it in my purse or throw it into my backpack and forget that it’s there. For a few comparisons: it’s half a pound lighter than the ThinkPad X1 Carbon Gen 9. It’s close to a pound lighter than the ThinkPad X13, as well as the latest MacBook Air. These are already laptops known for their portability, and the Nano is noticeably slimmer.

The laptop achieves this without sacrificing durability, which is often a concern with ultra-light devices. The chassis feels sturdy — there’s just a tiny bit of flex in the keyboard and screen, and I’d be very comfortable jerking it around in a briefcase. Lenovo says the Nano has been “tested against 12 military-grade certification methods,” so there’s also that.

I’m also very happy with the 16:10 display, which is about the same height as a typical 14-inch 16:9 screen. In addition to the extra vertical space it provides, it’s sharper than a 1080p display, and it delivers a nice picture.

There’s also a Dolby Atmos speaker system, which includes two upward-firing and two downward-firing woofers. The laptop comes preloaded with Dolby Access, which is one of my favorite audio apps. You can swap between presets for Movies, Music, and other scenarios (as well as custom profiles), and the settings make an audible difference. You can also personalize the four-microphone array for different uses, including conference calls and voice recognition.

My one quip with the chassis is the keyboard. It’s a fine keyboard, and the little red nub is there if you want to use it. But the Fn and Ctrl keys are swapped from the locations where you’ll find them on other laptop keyboards — every time I meant to hit Ctrl, I hit Fn. After a week of use, I have not yet adjusted to this.

Now, I want to be very clear: I know this is the way ThinkPad keyboards have been laid out since the dawn of time. I also know you can swap the two keys in BIOS. Still, if you’re not currently a ThinkPad user, you should note that you’ll either need some time to get used to this keyboard layout or you’ll be using mislabeled keys.

The port selection is also limited, though that’s not unique among thin devices. You get two USB-C ports and an audio jack, and they’re all on the left side.

Performance-wise, the X1 Nano did an excellent job. It’s not what you’d want to buy for demanding tasks like heavy gaming or video editing, but it kept up with my gaggles of Chrome tabs, spreadsheets, and streaming apps without a stutter. I never heard any noise out of the machine or felt noticeable heat, even when I was running fairly taxing loads.

As mentioned earlier, the Nano has a number of new security features that are coming to 2021 ThinkPads across the line. The one I found most useful was the presence-sensing tool, which automatically locks the device when you’re not in front of it and unlocks it when you’re back. ThinkPads aren’t the only business laptops to adopt this technology, but it is convenient and worked well in my testing. You can also turn it off if it creeps you out. Elsewhere, there’s a match-on-sensor fingerprint sensor next to the touchpad (the qualifier means that fingerprint enrollment, pattern storage, and biometric matching all happens directly within the sensor). The sensor also uses AI to distinguish between real and fake fingers, in case that was a concern of yours.

The one feature that isn’t quite stellar here is the battery life. I averaged 6 hours and 38 minutes between charges with my daily workflow (around a dozen Chrome tabs with office stuff like emailing, Slack, Google Docs and Sheets, occasional Spotify and YouTube streaming, with brightness around 200 nits). That’s fine, and not unexpected since the Nano only has a 48Whr battery, but I often see over seven hours out of machines at this price. It means that if your workload is similar to mine, you may not make it through a full workday on a charge. The 65W charger took 43 minutes to juice the device up to 60 percent.

In the ThinkPad X1 Nano, Lenovo is playing to its strengths. You’re getting a comfortable keyboard and touchpad, a red nub, and a capable processor in a sturdy system that’s built to last. The Nano brings a new factor to the table — a chassis that’s (just) under two pounds. The target audience here is clear: business users who like the traditional ThinkPad look and feel and are willing to pay more for an ultralight machine.

The main compromises you’re making are the battery life and port selection. Neither of these is an absolute disaster for the Nano, but they mean that a chunk of users may find competing business laptops more practical. There are a number of ultraportable business laptops with superb battery life, more useful ports, and comparable weight (such as Asus’ ExpertBook B9450 and HP’s Elite Dragonfly). That said, for users who are attached to the ThinkPad brand and want the lightest of the light, the X1 Nano will deliver.

To start using the Lenovo ThinkPad X1 Nano, you’ll need to agree to the following:

That’s six mandatory agreements and 12 optional agreements to use the ThinkPad X1 Nano.