Share All sharing options for: OtterBox’s Mobile Gaming Clip is clever but clumsy

OtterBox, the company best known for its ruggedized cases, has developed a $30 clip that can attach your phone to an Xbox controller for playing games. Called the Mobile Gaming Clip, it’s part of a growing trend of accessories for playing cloud-based console games right on your phone. What makes OtterBox’s clip different is it can also work as a phone stand, separate from the controller — although the phone stand feature isn’t quite as robust as what I was hoping for.

OtterBox’s clip is designed specifically for Xbox controllers, and it works with controllers made for the Xbox One, Series X / S, or the Elite Series 2 controller. There’s also a little cutout for the charging port, meaning if you need to connect your Xbox controller to a USB cable, you will not need to remove the clip from the controller. You can also detach the arm from the clip itself and use it as a stand to prop up your smartphone for tabletop gaming, watching movies, or video calls.

With Microsoft rolling out xCloud, it’s partnering with multiple manufacturers to make a variety of mobile gaming accessory companies, including OtterBox, Razer’s Kishi, and 8BitDo’s SN30 Pro for Android, provide different experiences. Microsoft is aiming to ensure there is a big ecosystem of gaming peripherals once its cloud gaming service becomes more widely available. 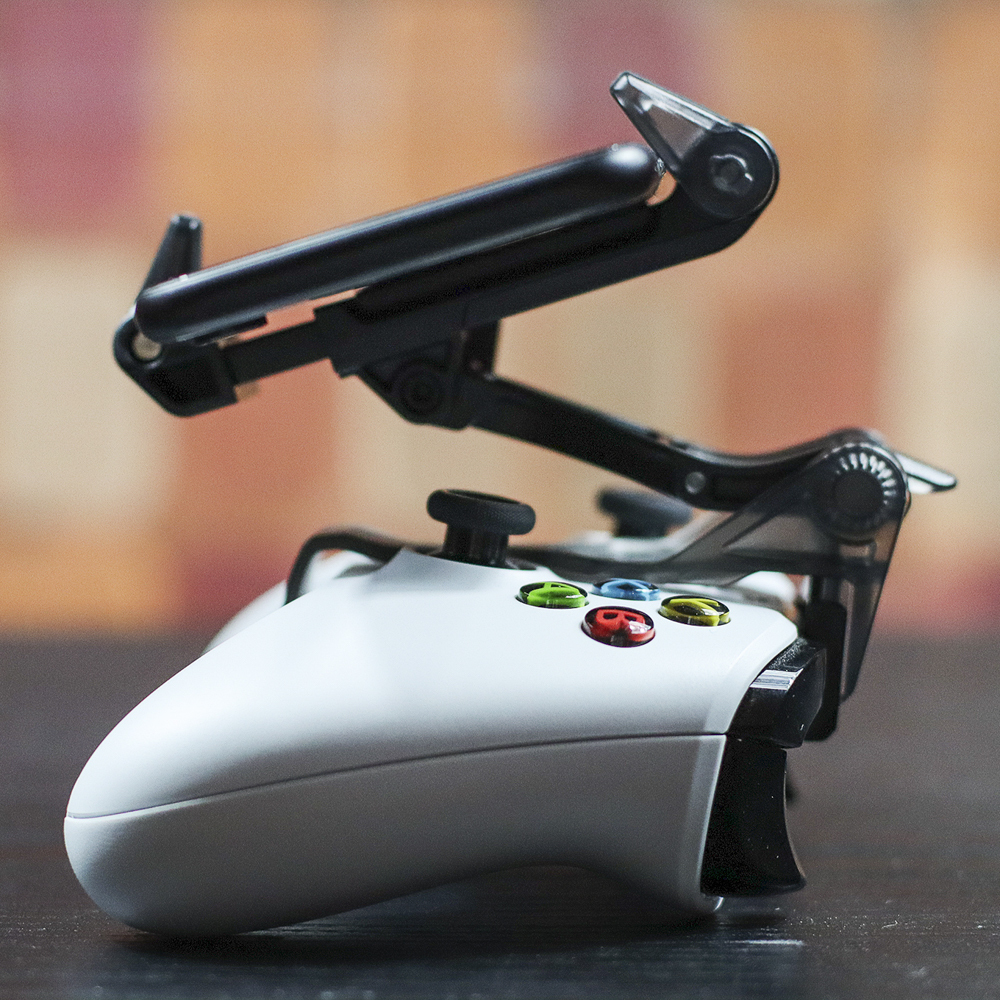 Setup for the OtterBox Mobile Gaming Clip is straightforward: connect your Xbox controller to your phone, attach the clip to your controller, mount the phone, and start playing. It does require more force than other gaming clips to attach it to the controller. Once you have it properly installed, the clip tightly clasps across the controller, so you don’t have to worry about it getting loose and falling off.

Some mobile gaming clips, like PowerA’s MOGA Mobile Gaming Clip, tend to feel unbalanced, particularly with a big or heavy phone or a phone with a bulkier case. OtterBox’s Mobile Gaming Clip has a better distribution of weight, which made the controller feel a bit more balanced.

One reason for that is OtterBox’s Mobile Gaming Clip has a “rapid adjust feature,” which means you can adjust the angle of your phone when using the clip. The clip’s arm can extend a bit, allowing you to experiment with the angles you prefer. There’s also a latch located on the arm of the Mobile Gaming Clip that allows you to lock it in place so it doesn’t shift around while in use.

I had some issues when I tried to mount my phone

There are three claws to keep your phone in place. The bottom claw extends, allowing bigger phones to fit into the accessory by extending a few centimeters. This makes it easy to fit bigger phones into the gaming clip. The claws don’t block me from reaching the volume or power buttons on my iPhone XR, though it is a bit cumbersome to have to unlock my phone while using the mount because it’s sideways in the mount. The design also makes it easy to use a pair of wired earbuds or connect a charger to charge my phone while I continue gaming.

I did have some issues when I tried to mount my phone; the phone case I use primarily has a PopSocket attached in the center, and it added too much thickness and made my phone less secure in the clip, even popping out when I moved the clip even slightly. I ended up having to remove the case from my phone every time I wanted to use the clip. If you don’t have an accessory like a PopSocket on your phone, the clip should work with almost any standard case.

The most interesting feature for OtterBox’s Mobile Gaming Clip is tabletop mode. You can switch from the controller to tabletop mode by detaching the arm to the clip portion of the accessory, allowing you to use the gaming clip as a viewing stand for gaming or even watching movies and TV shows. The tabletop feature is an ambitious idea, but it ends up being more of a kickstand than an actual stand. You have limited ability to adjust the angle of the phone in this mode, and you can’t raise the phone up off the table in any way.

Yet, the option for a tabletop mode does address one of the biggest problems with mobile gaming clips: hand fatigue from the weight of a controller, phone, and clip combined. OtterBox helps solve this problem by allowing you the ability to take a break from the gaming clip but still giving you that freedom to continue gaming on your phone.

In the last few years, the cloud and mobile gaming market has become a more exciting space in the industry, with successful free-to-play titles like Call of Duty Mobile and Microsoft truly beginning its push into cloud gaming. As cloud gaming continues to grow, there’s likely going to be a big expansion in the availability and variety of gaming clips like this one. This means if you do not like the current options available on the market, there is a high probability that similar products will be released in the coming months and years.

At $30, OtterBox’s clip is less expensive than those solutions, but there are still cheaper options if you want to clip your phone to an existing controller. I like how the clip does not feel unbalanced when attached to the controller, and the tabletop mode is interesting. But it ends up feeling like more of an afterthought because of how limited the clip ends up being when used on a table. Yet, the things OtterBox’s Mobile Gaming Clip does right are enough to justify the $5 to $10 price premium compared to other options available on the market.

Photography by Taylor Lyles / The Verge