A consumer laptop in business clothing

Any business laptop that comes out these days is entering a tough field full of very established players. The world is already stuffed full of ThinkPads and Latitudes, which have strong followings, cover price ranges across the board, and are highly attuned to what workers need.

So my question with lesser-known business laptops is usually: Where does this fit? What customer is it catering to who might be underserved by a ThinkPad?

With its TravelMate line (specifically the TravelMate P6), Acer seems to be going for two potential openings. The first is that the TravelMate is, as the name implies, specifically intended for frequent business travelers. It’s light, portable, and sturdy, at the expense of some other traits. And the second is its price. Starting at $1,199.99, the TravelMate line is targeting a more price-conscious demographic than many business laptops that would be considered “premium” are. I think the TravelMate succeeds in filling these two niches in particular. But it has some other drawbacks that make it tough to recommend for a general audience.

Our review of Acer Travelmate P6 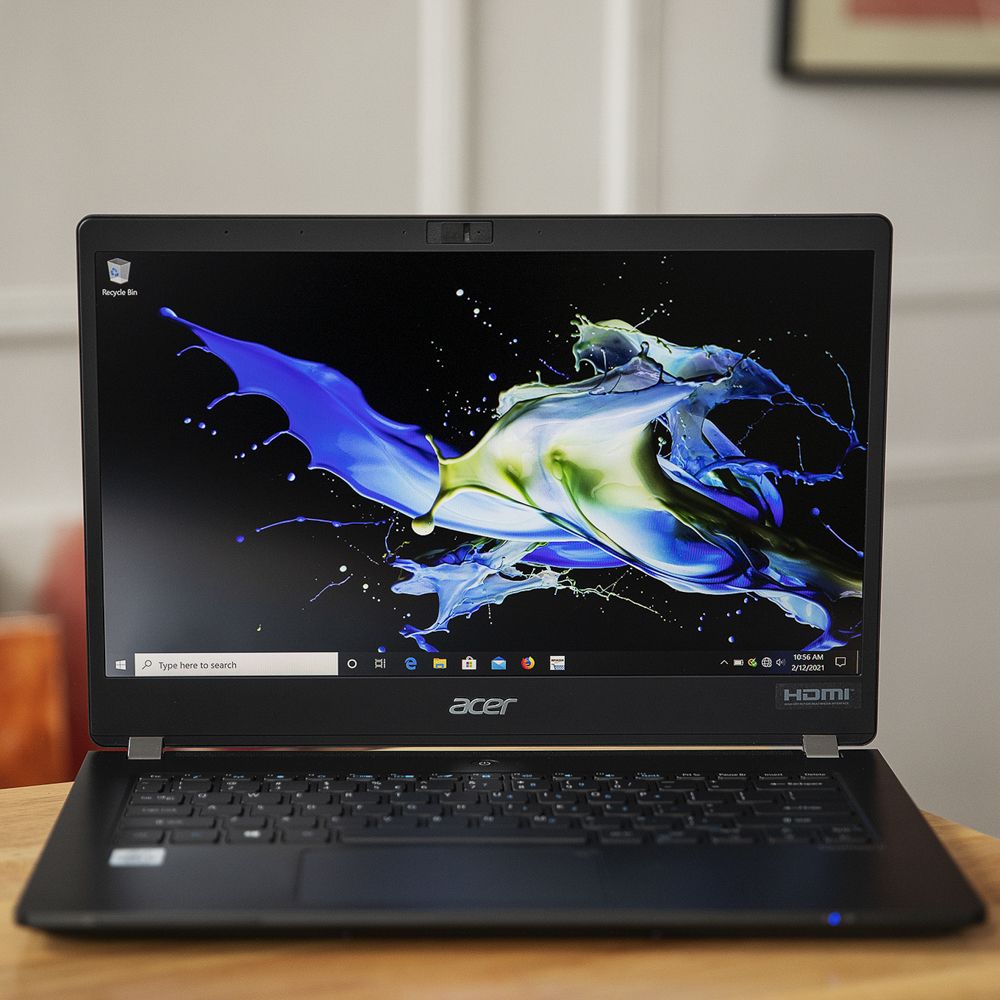 The aspect of the TravelMate that should be a big help to mobile business users is the port selection. Despite being quite thin, the laptop is able to fit a USB Type-C (supporting USB 3.1 Gen 2, DisplayPort, Thunderbolt 3, and USB charging), two USB 3.1 Type-A Gen 1 (one with power-off USB charging), one HDMI 2.0, one microSD reader, one combination audio jack, one Ethernet port (with a trap-door hinge), one DC-In jack for Acer’s adapter, one lock slot, and an optional SmartCard reader. The fewer dongles and docks you have to travel with, the better.

Portability is another priority here and is another one of the TravelMate’s highlight features. At just 2.57 pounds and 0.65 inches thick, the TravelMate should be a breeze to carry around in a backpack or briefcase. Acer says it’s put the product through a slew of durability tests for weight and pressure, drops, shocks, vibrations, and other hiccups you may encounter during the day.

Another area that’s likely important to some mobile professionals is videoconferencing capability. I found that to be a mixed bag here. The TravelMate’s four-microphone array had no trouble catching my voice, in both voice recognition and Zoom meeting use cases. Acer says they can pick up voices from up to 6.5 feet away. The webcam also produces a fine picture (though this unit doesn’t support Windows Hello for easy logins) and has a physical privacy shutter. The speakers are not great, though — music was tinny with thin percussion and nonexistent bass.

The TravelMate also includes some business-specific features including a TPM 2.0 chip and Acer’s ProShield security software.

In other, less business-y areas, though, the TravelMate has a few shortcomings. Shoppers looking for anything more than portability out of the chassis may be disappointed. While most of the TravelMate is made of magnesium-aluminum alloy, it has a bit of a plasticky feel — and while the keyboard is sturdy, there’s considerable flex in the screen. And then there’s the aesthetic: the P6 is far from the prettiest computer you can buy for $1,199.99. It’s almost entirely black, with very few accents (and the ones it has are a drab gray color). And the bezels around the 16:9 screen are quite chunky by modern standards. Plus, the 16:9 aspect ratio is falling out of fashion for a reason — it’s cramped for multitasking, especially on a 13- or 14-inch screen — and the panel maxed out at 274 nits in my testing, which is a bit too dim for outdoor use.

The TravelMate looks and feels like it was made a bit better than budget fare. But it also looks and feels closer to an Aspire 5 than it does to a top ThinkPad. For context, you can get an Aspire 5 with identical specs to this TravelMate model for just over $700. Another comparison: the Swift 5, a gorgeous consumer laptop that’s even lighter than the TravelMate, can be purchased with comparable specs for just $999.99. This is all to emphasize that you’re sacrificing a bit of build quality (as well as some extra money) for the TravelMate’s weight and business-specific offerings.

The touchpad is also not my favorite. For one, I had some palm-rejection issues. Those didn’t interfere with my work per se, but it was still unnerving to see my cursor jumping around the screen while I was typing. In addition, the touchpad on my unit had a bit of give before the actuation point, meaning one click required me to make (and hear) what felt like two clicks. And its off-center placement meant that I was constantly right-clicking when I meant to left-click, and I had to consciously reach over to the left side in order to click with my right hand. Finally, the click itself is shallow and far from the most comfortable.

The Acer TravelMate P6 presents you with multiple things to agree to or decline upon setup.

In total, that’s five mandatory agreements and 13 optional ones.

I also didn’t love the power button. It contains a fingerprint sensor, which worked quite well. But the button itself is stiff and very shallow. I know this sounds like a small nitpick, but it was really irksome and made turning the TravelMate on in the morning more of a hassle than it could’ve been.

The TravelMate model that I received to review is sold out everywhere I’ve looked as of this writing. The closest model to it is listed at $1,199.99 (though it’s cheaper through some retailers) and comes with a Core i5-10310U, 8GB of RAM, and 256GB of SSD storage. My unit is the same, but it has a Core i5-10210U. Those processors don’t have a significant performance difference, so my testing here should give you a good idea of what to expect from that model. You can also buy a model with a Core i7-10610U, 16GB of memory, and a 512GB SSD for $1,399.99. Both configurations run Windows 10 Pro and include a 1920 x 1080 non-touch display.

For my office workload of emails, spreadsheets, Zoom calls, etc., the TravelMate did just fine. I sometimes heard the fans spinning at times when my load wasn’t super heavy, but the noise wasn’t loud enough to be a problem. Note that this processor has Intel’s UHD graphics, rather than its upgraded Iris Xe graphics, which means the system wouldn’t be a good choice for gaming, video software, or other graphics work.

But there’s one area where the TravelMate really impressed, and it’s one that’s quite useful for travelers: battery life. Running through my daily workload at 200 nits of brightness, my system averaged nine hours and 15 minutes of continuous use. That’s almost twice what the budget Aspire 5 got with my same workload. It also beats the Swift 5 and the pricier ThinkPad X1 Nano. If your workload is similar to (or lighter than) mine, you should be able to bring this device around an airport or conference for a full work day without being attached to a wall.

One performance complaint, though: this thing comes with bloatware. My unit was pre-installed with all kinds of junk, including games (Amazon was pinned to the taskbar) and other software like Dropbox. Most annoyingly, it came with Norton, which bugged me with annoying pop-ups all the time and also seemed to impact battery life: the TravelMate consistently lasted around an hour longer after I uninstalled the program. It doesn’t take too long to uninstall everything, but I’m still morally put off by the idea of so much cheap crapware being loaded onto a laptop that costs over $1,000. And it’s especially troubling to see on a business laptop, because it can expose users to cybersecurity risk.

The TravelMate line is filling a pretty specific niche, and it fills it just fine. If you’re a frequent business traveler who needs a light device with plentiful ports and all-day battery life, you’re shopping in the $1,199 price range, and you’re willing to overlook a mediocre touchpad, dim 16:9 display, and other hiccups, then the P6 will be a better choice for you than something like a pricier and heavier Dell Latitude or the shorter-lived and port-starved ThinkPad X1 Nano.

That said, the P6 has enough drawbacks that I think the bulk of customers would be better served by other laptops. Those who like the Acer brand may like some of Acer’s other offerings — especially those who don’t need the business-specific security features. The Swift 5 is lighter, nicer-looking, and more affordable than the TravelMate, with a better touchpad, screen, and processor. And budget shoppers can find much of what the TravelMate offers in any number of cheaper laptops. The Aspire 5 and the Swift 3 don’t have the TravelMate’s battery or port selection, but they do improve upon its touchpad, audio (in the Aspire’s case), and looks (in the Swift’s case). And, of course, there’s a litany of other laptops in this price range — from HP’s Spectre x360 to Dell’s XPS 13 — that are excellent in almost every way and also offer 3:2 screens.

Ultimately, the TravelMate isn’t a bad laptop — but if it’s the best laptop for you, you probably know who you are.