Acer’s Predator Triton 300 SE is chasing after the hype that Asus built with last year’s excellent Zephyrus G14. It’s similar in a few key ways: it’s a sophisticated-looking gaming laptop bordering on ultrabook territory in terms of its sleek and relatively thin design. It has a 14-inch 1080p display with a fast refresh rate and respectable graphics capabilities to top it off. Even its price hits a similar spot at $1,399.

Asus’ latest G14 hasn’t made its way to us for review yet, so we don’t know exactly how it’ll compare to this one in all of the ways that matter. But in the meantime, Acer’s new model already has some clear advantages, like a built-in webcam and the Thunderbolt 4 port. It also achieves commendable gaming performance with the Nvidia GeForce RTX 3060 graphics card, but don’t let the similarities (or even the few perks) trick you. Calling the new Triton 300 SE a Predator is a little bit of a misnomer. 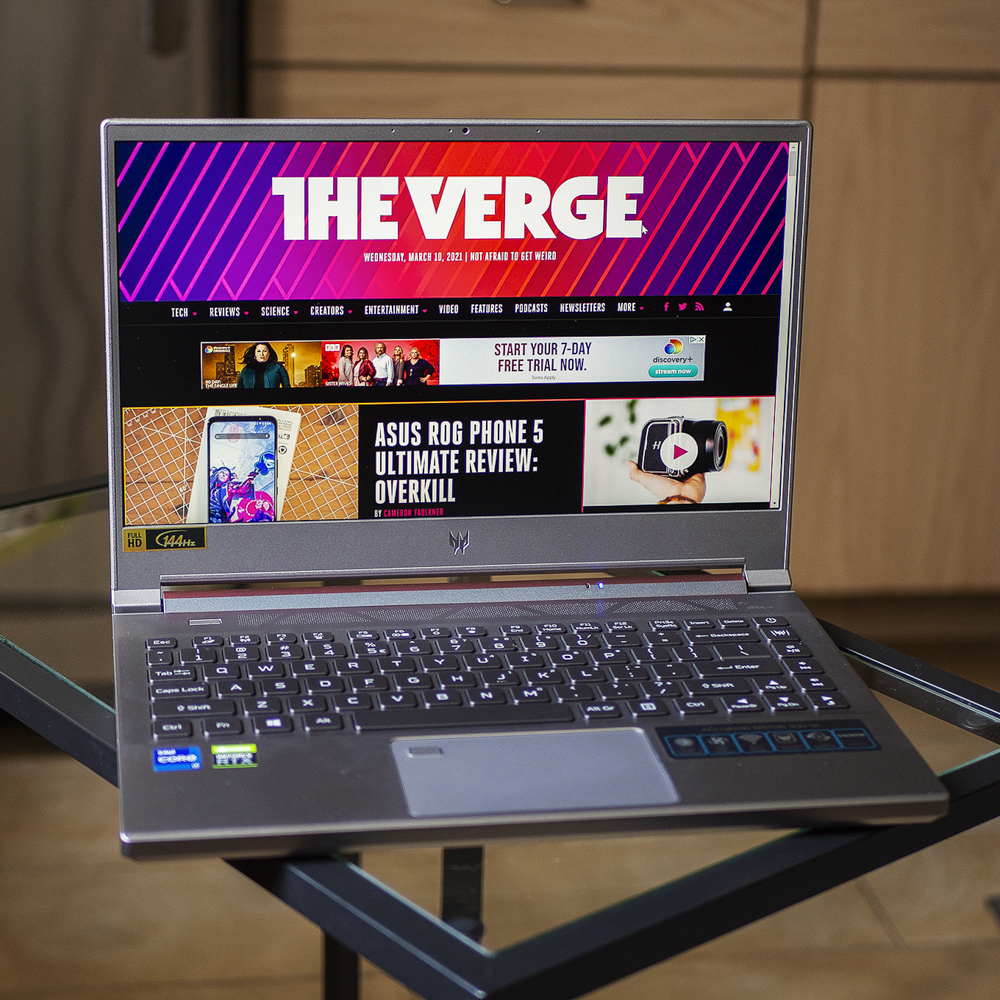 Last year’s G14 defied my colleague Monica Chin’s expectations for what a gaming laptop could achieve when it comes to battery life. Comparatively, Acer’s new laptop isn’t nearly as long-lasting, but it’s not terrible. The Triton 300 SE has a 60Wh four-cell battery that lasts around six hours on average with relatively light usage. More on this later, but safe to say it’s considerably less than the 10-hour battery life Acer claims. You can feel confident taking the Triton 300 SE out to a cafe to do some work for a few hours. But if you intend to be out all day, or use it to do any gaming, you’ll need to bring the charger.

Whether limited battery life bothers you or not, there are some other issues that I couldn’t help but notice. The interplay of all-plastic on the lid and an all-metal chassis looks fine, but the lid feels flimsy in a way that makes me concerned for its longevity. Applying just a few pounds of pressure to the Predator logo beneath the display makes it bow more than it should. On the unit that Acer sent us, the softer plastic built into the screen’s bezel that cushions the lid when it closes has tiny gaps where it’s not seamlessly adhered. And near the keyboard, the “Turbo” key that amps up the fans has a slight imperfection on it. Lastly, Acer stuffed far too much annoying bloatware into the Triton. About every hour, there’s a pop-up asking me to install or subscribe to something.

All of this makes for a laptop that doesn’t feel as high-end as its cost indicates it should.

There’s just one configuration of this model right now, containing a four-core Intel Core i7-11375H processor, 16GB of DDR4 RAM, 512GB of NVMe SSD storage, as well as the aforementioned RTX 3060 graphics card. The performance of that GPU depends a lot on how much power each manufacturer wants to allow it to draw. And in this case, it has a 75W maximum power draw and can be boosted up to 1,382MHz. After spending time with several RTX 3070-equipped gaming laptops with more headroom than that, I wasn’t expecting much here. However, I was pleased to see gaming performance in multiple titles getting around 60 frames per second without requiring compromises in the settings.

Horizon Zero Dawn, a system-intensive, open-world game, ran at an average of 60fps with ultra settings turned on. Testing Triton 300 SE’s RTX-enabled ray-tracing chops, Shadow of the Tomb Raider on ultra settings with the ray-tracing shadows set to medium got 61 frames per second. Turning the ray-tracing setting up to ultra knocked it down to 48fps. Running that game with ray tracing set to ultra and Nvidia’s deep learning super sampling (DLSS) technique turned on that lowers the render resolution, then uses AI to upscale textures, Acer’s laptop achieved 55 frames per second, splitting the difference. Red Dead Redemption 2, another demanding open-world game, ran at 53 frames per second on ultra settings.

It’s not surprising that, with its newer components, Acer’s laptop puts up more favorable numbers than the 2020 G14 that had an RTX 2060. Performance in some of Asus’ 2021 models could fare slightly better in terms of 1080p performance, even though it similarly uses the RTX 3060. That’s because its graphics chip has a slightly higher 80W power ceiling compared to 75W in the Triton 300 SE, not to mention that its AMD Ryzen 9 5900HS processor has eight cores compared to the four cores with this 11th Gen Intel processor.

The Triton 300 SE’s metal chassis effectively turns into a heatsink to dissipate heat under heavy use, and I noticed it getting warm during gameplay. Unlike most laptops, the heat extended all the way down to the wrist rest, but it wasn’t bothersome. I appreciate the thought that went into the cooling system, which takes air in through the back, then pushes it out the sides of the laptop. Some laptops do the inverse of this, and it can make actually using laptops on your lap a little too toasty, even for non-gaming-related tasks.

There’s a “Turbo” button located above the main batch of keys that overclocks the CPU and GPU, sending the fans loudly into overdrive. I didn’t need to use this mode to achieve the frame rates I cited earlier, and turning it on didn’t seem to make a huge difference during my testing. I also didn’t notice an appreciable difference using it with Adobe Premiere Pro to export a 5-minute, 33-second 4K video. It took 5 minutes and 40 seconds to run through the test. Considering the price and size of this machine, these results rank highly among other laptops we’ve tested recently.

Acer uses a 14-inch 1080p IPS 16:9 aspect ratio panel with a 144Hz refresh rate with up to 300 nits of brightness. During general use and gameplay, I have no complaints about the color accuracy or brightness, though there’s some noticeable ghosting, likely attributed to a higher response time that adds latency. As a result, the mouse pointer doesn’t glide across the screen as smoothly as I’ve seen on other high refresh rate screens, and it extends to gameplay looking a little blurry at times, trivializing the technical achievement of hitting 60 frames per second in games, as well as having a 144Hz refresh rate in the first place. Despite multiple requests for a comment on the response time, Acer didn’t provide the spec.

Additionally, this screen’s viewing angles are far more limited than I expect from an IPS panel. It’s easily viewable straight-on, but less so from other angles unless the brightness is amped up. Next to the less-than-stellar battery life, this is a big miss for Acer that might be less forgivable for gamers.

I was right at home with Acer’s keyboard, though, both in terms of the layout and feel of the keys here. This keyboard has three-zone backlit keys (you can customize each zone to be a different color in its Predator software), and though many features require holding the “Fn” key to use, the layout is intuitive and doesn’t feel overly cramped.

The glass trackpad supports all of the gestures I expect with Windows Precision drivers, but it isn’t as responsive to my touch as it should be. I think it’s more an issue with the screen’s response time than it is an issue with the trackpad. A fingerprint scanner you can use as an alternative to a PIN is embedded in the top-left corner of the trackpad, but I’ve found that it only works half the time. With that failure rate, I’d rather just have more trackpad real estate.

As with other Windows 10 computers, the Acer Predator Triton 300 SE presents you with multiple things to agree to or decline upon setup.

In addition, there are several optional things to agree to:

Acer included the essentials in terms of ports. There are two USB Type-A 3.2 Gen 2 ports — one on each side, with the right-facing port being able to charge some devices. The star of the show is the Thunderbolt 4 USB-C port, which can be used to transfer data or connect a display. Additionally, I’m happy to see an HDMI 2.1 port, offering up to 4K resolution at 120 frames per second. There’s also a headphone combo jack and a DC-in port for its relatively compact 180W power brick. I wish Acer allowed this laptop to be recharged via USB-C, but it’s all handled through the proprietary DC charging port.

Coming back to battery life, it’s not the biggest flaw that this laptop can only get between five and six hours of battery life per charge while using apps like Microsoft Edge, Spotify, and Slack. The issue here is that Acer claims it will last up to 10 hours, but it doesn’t outwardly mention that you’ll only get that kind of longevity if you’re doing something very simple, like watching HD video with no other apps running. That’s fine if you’re on an airplane for hours on end, but most people rely on a laptop for more than that, so it’s far from the best method for judging battery performance. Based on my testing, the best results you should expect with light usage is about six hours at most. It’s not bad for a gaming laptop, but it keeps the Triton 300 SE from hanging with the battery performance you can get from other ultrabooks or even the Zephyrus G14.

It was daring of Acer to jump into the ring against Asus’ Zephyrus G14, a gaming laptop that ticks a lot of boxes (aside from the missing webcam) for the price. This is a more elegant-looking machine than the G14, and compared directly, it’s hard to not appreciate its Thunderbolt 4 port and a webcam. It’s also a capable performer with games. But Asus proved that a gaming laptop can be more than just a powerful machine. It can also have good battery life for portable use and competent build quality without a bunch of bloatware. The competition is fierce, but the Triton 300 SE is more like prey than a bonafide Predator.

Gucci built a persistent town inside of Roblox