And it’s coming to the US this week

Share All sharing options for: The Astro City Mini is an awesome blast through Sega’s arcade past

Sega’s latest retro gaming machine, the Astro City Mini, comes on the back of two very different products: the excellent, crowd-pleasing Genesis Mini and the baffling but adorable Game Gear Micro. The former was an obvious mainstream play, the latter a full-blown swing for esoterica.

The Astro City Mini manages to straddle both approaches. An all-in-one miniature re-creation of a specific type of arcade cabinet with 37 games preloaded, it probably wasn’t on many people’s retro console bingo cards. But the finished product is very well-executed and should be considered essential for Sega fans.

I got my Astro City Mini a few months ago when it was released here in Japan. I kept meaning to write about it, but I always found excuses to delve further into its catalog first. Well, now’s the time. Limited Run Games just announced that it’ll be selling, well, a limited run of the system for the US with localized packaging. Just 3,500 units will go on sale on Friday for $129.99. 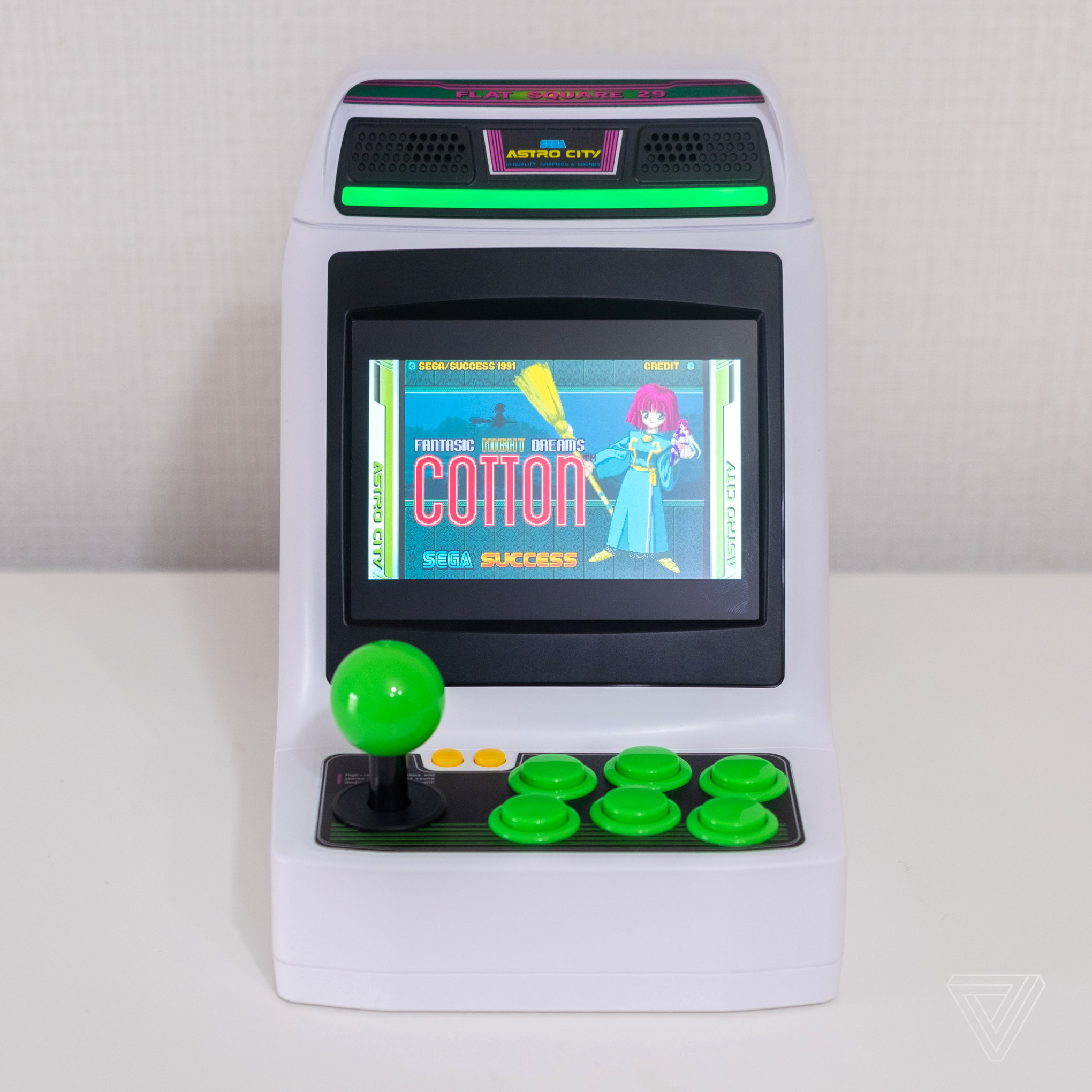 Unlike the various consoles that have recently been re-created in miniature form, the Astro City wasn’t a specific system that anyone ever designed games for. It was a cabinet that Sega sold with the intention of letting arcade proprietors fit with various game boards, and it turned out to be one of the most popular and iconic cabinets ever produced. You can still find units today in many Japanese arcades playing host to any number of games.

That meant Sega had a lot of freedom when it came to choosing which titles to include on the Astro City Mini. Ultimately, it settled on 37 games that represent an idiosyncratic, diverse selection of the company’s arcade history, from big hitters like Virtua Fighter to lesser-known titles like Dark Edge that have never received home releases before.

The Mini hardware is chunky and solid, with Sega’s typical attention to detail. You can even buy a $39.99 “style kit” that includes a customizable marquee, a little stool, and a riser with a coin slot so that it can be used as a money bank. If there’s one thing Sega has been very good at lately (other than pumping out Yakuza games), it’s crafting cute replicas from its hardware heyday. The Astro City Mini is no different.

There are a couple of quirks, however. For some reason, Sega saw fit to use a 16:9 display even though none of the games run in widescreen; most of them are 4:3, and some are vertically oriented shooters. The only content that actually fills the screen is the main menus. You can fill in the pillarboxes with some themed borders, but the choice of panel feels like a big compromise, since there’s clearly space for a 4:3 screen here. SNK’s similar but much smaller Neo Geo Mini has a decent 4:3 panel with more vertical height than what you get on the Astro City Mini.

The Neo Geo Mini had terrible HDMI output, however, while the Astro City Mini looks far better on a TV screen. The image quality is much cleaner, and you do at least get some benefit from the wider menus, which let you shuffle through some screenshots and read some basic information about each game before launching it. (I’ll note here that while most of the games on the Astro City Mini are in Japanese, the text in most of them is fairly minimal, and the system menus can be fully switched to English.)

One element that the Astro City Mini does, unfortunately, share with the Neo Geo Mini is its lack of built-in battery, which is a bummer for a system with its own screen. It’d be a lot more convenient and practical if you could use it without tethering it to a wall or a USB battery pack. The situation is actually worse than with the Neo Geo Mini because Sega decided to go with Micro USB instead of USB-C.

But there is one area where the Astro City Mini obliterates the Neo Geo Mini, and it’s far more important to the overall success of the product: the built-in controls are fantastic. While SNK inexplicably used an analog-style stick for its 2D arcade cabinet, Sega has outfitted the Astro City Mini with a small but gloriously clicky stick along with hyper-responsive, tactile buttons. It feels like a high-quality arcade stick that’s been hit with a shrink ray, and in combination with the riser, it instantly elevates the Astro City Mini from “fun desk toy” to “legitimately good way to play these games.”

If you plan to play the Astro City Mini mostly on your TV, you might want to pick up a $27.99 extra controller — not least because the regular USB pads I tried didn’t work. Fortunately, the Astro City-themed ones that Sega designed are very good, with a smooth, circular D-pad and an arcade-style six-button layout. There’s also a full-size Astro City arcade stick that Sega released in Japan, though Limited Run Games isn’t selling it.

The Astro City Mini’s game selection isn’t necessarily what I was expecting, not least because most of the titles were released before the cabinet actually made its debut in 1993. The oldest game here is Flicky, which came out in 1984 on Sega’s System 1 board, and the newest is 1994’s Puyo Puyo 2 for the C2. Other than 1993’s polygonal Virtua Fighter, the lineup can basically be seen as a well-curated journey through Sega’s pre-3D arcade history. There are notable omissions like OutRun, though that probably has as much to do with the stick-based control scheme as anything else.

All of the games included are the original arcade versions rather than the generally inferior ports seen on the Master System and Genesis. That means that, unlike most re-releases, you’re getting canonical versions of big Sega games like Space Harrier, Fantasy Zone, Shinobi, and more. The emulation generally seems to be good. The only game that stood out to me otherwise was Virtua Fighter, which has a little lag and runs at a higher resolution than I expected.

For me, the main selling point of the Astro City Mini is the games that got limited or nonexistent home releases. Dark Edge is a boundary-pushing pre-polygon proto-3D fighting game that looks and plays like nothing else. Cotton is a great scrolling shooter that only came out on the TurboGrafx-CD and the Neo Geo Pocket Color in the West. Arabian Fight is a technically impressive beat-em-up that never left the arcades. Rad Mobile is Sega’s first 32-bit game and the first to feature Sonic the Hedgehog (albeit as a toy dangling from your car’s mirror), but its only home release was for the Sega Saturn and never left Japan. The Revenge of Death Adder is the most advanced entry in the Golden Axe series, yet it was arcade-exclusive until now.

The Astro City Mini’s lineup isn’t comprehensive, but it never really could have been. It’s easy to wonder about titles that were left out. If Virtua Fighter made it on, why not Virtua Racing, for example? And were three Columns games really necessary? What’s here, though, is a strong collection that combines major names with deep cuts and should keep any fan of arcade games occupied for a long time.

The Astro City Mini is an odd, niche product with some weird flaws, but I can’t help but love it. The games are great, and the hardware is fun to play with, which is ultimately what really matters. I think it lands in a nice middle ground between the nostalgic appeal of the Genesis Mini and the obscure charms of the Game Gear Micro, while making for a better coin bank than either.

That’s why I’m glad it’s getting a US release, however low-key. If you’re a certain kind of Sega fan, or a fan of arcade gaming in general, you’ll want to pick one up.