Our review of MSI Prestige 14 Evo 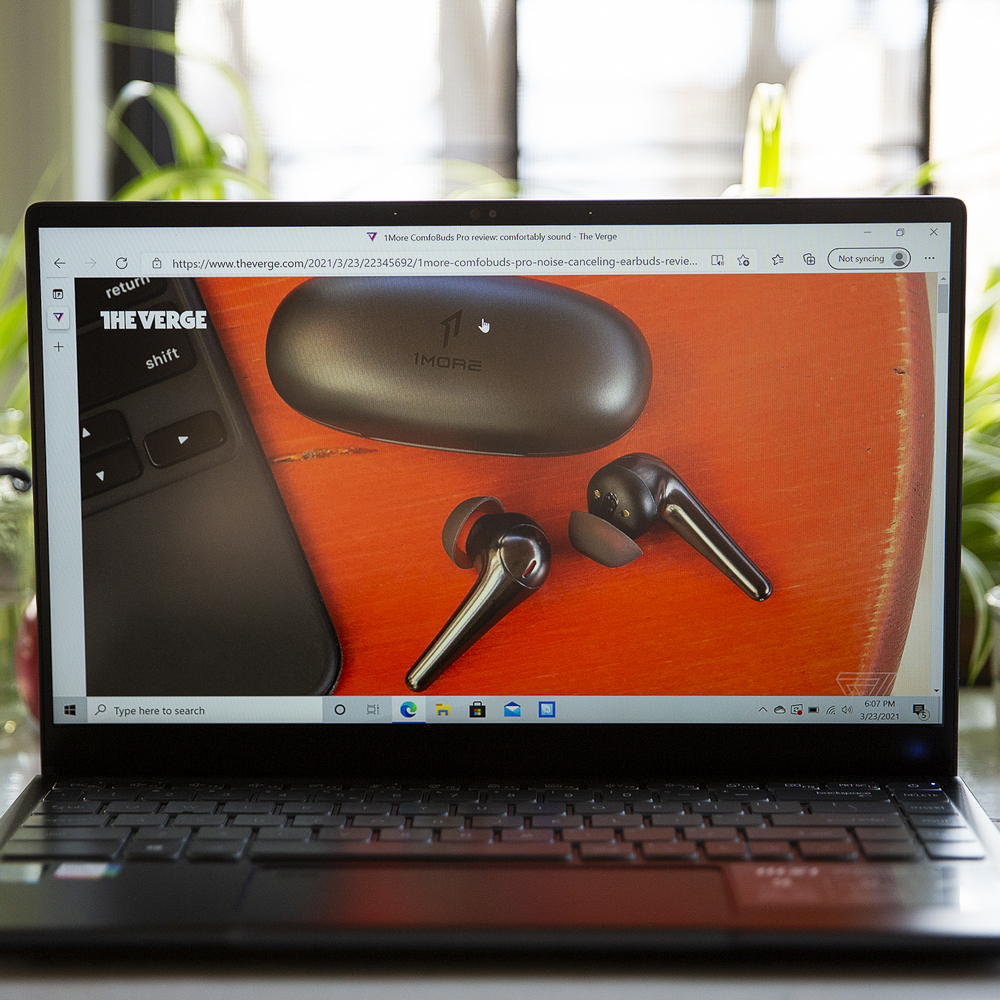 Unfortunately, that makes it a tougher sell. The 14-inch consumer laptop space at this price point is absolutely stuffed; there are multiple machines at comparable prices that do just about everything very, very well. A laptop with even one significant drawback is going to have trouble rising to the top of the pack. Unfortunately, the Prestige 14 Evo has a number of them.

That doesn’t mean there’s nothing exceptional about the device. The Prestige is one of the few 14-inch laptops you can buy that includes the Core i7-1185G7, Intel’s most powerful chip for ultraportables. This review is my first look at the flagship processor (outside of a reference design that I had for a few days last year) — most of the top laptops that I’ve reviewed recently include the Core i7-1165G7, which is a step down.

That undoubtedly makes the Prestige 14 Evo one of the most powerful 14-inch Intel laptops you can buy at its price point. But does the 1185G7 offer significantly better performance than other Intel systems, or Apple’s M1 MacBooks, to outweigh shortcomings in the chassis? For the majority of users, the answer is going to be no.

If you’ve seen or used last year’s Prestige 14, the chassis isn’t massively different. The Evo has the same lightweight build with a fold-under hinge, a fingerprint sensor in the top-left corner of the touchpad, and a decent keyboard that’s plasticky but comfortable overall. My model is “carbon gray,” but the finish also comes in “rose pink” and “pure white.”

One update you’ll probably notice is that there’s a new logo. MSI’s classic dragon has been confined to its gaming models; the Prestige now has the same plain-old MSI letters as the business-chic Summit Series. The ports have also been rearranged. The Evo includes two USB-C ports on the left as well as a USB-A, a microSD, and a headphone jack on the right; last year’s Prestige had the microSD on the left and an additional USB-A on the right. I’m sad to lose the additional USB-A (and the one that’s there is only USB 2.0, which is an old standard at this point), but it’s an okay port selection either way.

I have several issues with the chassis, though. First, it’s quite a fingerprint magnet, and the lid was covered in visible smudges after just a few days of use. It also has a bit of a plasticky feel, with some flex in both the screen and the deck. Second, not only does the 1920 x 1080 display have a cramped 16:9 aspect ratio, but it’s also dim, maxing out at 248 nits in my testing. That means it won’t be a great choice for use outdoors or in other bright settings.

Third, the touchpad had some palm-rejection issues: my right hand rested naturally on the right half of the touchpad while I was typing, and the cursor was constantly jumping around on my screen. (MSI says they haven’t heard this complaint about the Evo’s touchpad before.) Finally, the audio isn’t great — it’s tinny, bass is almost nonexistent, and there’s not enough volume to fill a room. You can check out my review of last year’s Prestige 14 for a more in-depth discussion of all these features.

I have several issues with the chassis

The biggest upgrades are on the inside — the Evo is powered by Intel’s latest 11th Gen processors. The base Prestige 14 includes a Core i5-1135G7, 16GB of RAM, and 512GB of storage. (RAM is soldered and there aren’t extra storage slots, but you can swap out the SSD.) The $1,149 model I’m using bumps that up to a Core i7-1185G7. Both processors come with Intel’s Iris Xe integrated graphics.

The Prestige 14 Evo is certified through Intel’s Evo platform, which means Intel has verified that it meets a number of performance benchmarks (including “all-day” battery life and one-second boot time) and includes modern amenities like Thunderbolt 4 and Wi-Fi 6 (Gig+).

The 1185G7 did a fine job with my standard workload of apps, dozens of Chrome tabs, Zoom calls, light photo editing, and the like. I never had to think twice about loading more tasks on — not only did the fans not freak out during my regular workday, but I never even heard them spin up. (I did occasionally hear some coil whine, which was annoying.) The keyboard and the bottom of the chassis remained cool as well. The experience was pretty comparable to that of using an M1 Macbook Air or any other top ultraportable as a daily driver.

To more directly compare the 1185G7 to other chips (primarily Apple’s M1), I ran a number of synthetic benchmarks. The results were a mixed bag — you can see them in the chart below:

In our testing, the MacBook Air beat the Prestige 14 Evo on every benchmark here except for Geekbench 5.3 OpenCL / Compute and the 30-minute Cinebench loop (which makes sense, since the MacBook Air doesn’t have a fan). It’s particularly notable that the 1185G7 loses to the M1 on both single-core benchmarks; single-core performance is typically Intel’s strength, but not here.

I also put the Prestige 14 Evo through two demanding real-world tasks: the Shadow of the Tomb Raider benchmark and a five-minute, 33-second 4K video export in Premiere Pro. The Evo’s results here were quite comparable to those of the MacBook Air. The Evo ran Tomb Raider (lowest settings, native resolution) at 38fps, which is identical to what the Air got in our testing. The Asus Zenbook 14 with a Core i7-1165G7 put up 29fps on the same title.

Overall, the 1185G7 is a clear improvement over lower-clocked Tiger Lake chips (but the 1165G7 is good enough that you likely won’t notice the difference outside of demanding tasks). Its integrated graphics seem to be neck and neck with those of the M1. (Intel’s Quick Sync is also likely a factor in that speedy export time.) But the synthetic benchmarks, which are more of a rough approximation of CPU capability, indicate that the Prestige might fall behind on other tasks, depending on your workload.

I did see some battery drain during the export, despite the laptop being plugged in. It turns out that the Prestige comes with overcharge protection that keeps it from charging if it’s plugged in above a certain percentage. You can swap between battery-capacity profiles in MSI’s Center for Business and Productivity.

The laptop seemed to struggle to cool the chip, as did last year’s Prestige 14 (though that model also had a discrete GPU to worry about). Throughout all of my testing, the CPU was consistently in the mid-90s (Celsius) — and that was with the fans audibly blasting.

Battery life is okay, but not the best. I averaged six hours and 12 minutes of continuous sustained work, with the screen around 200 nits of brightness. That’s not a disaster, but it’s only a bit ahead of the previous Prestige 14, which had discrete graphics and a smaller battery. (I got about six hours, with the same workload, out of that machine.) And it’s significantly worse than the MacBook Air, which gave my colleague Dieter Bohn up to 10 hours to a charge. I even got over an hour more out of the Zenbook 14. Compared to both systems, that’s a heck of a lot of battery life to give up for a nonexistent-to-small gain in real-world performance.

Finally, the Prestige comes preloaded with some junk, including Norton, which sent me annoying pop-ups until I uninstalled it. This isn’t the end of the world, but it’s still a bit irritating to see on a laptop that costs over $1,000. I also found MSI’s Center for Business and Productivity to be a bit of a pain to use — my clicks were somewhat slow to register, and the software occasionally froze or crashed. (It does have useful features, though, including the Application Optimizer which allows you to manually distribute CPU power between programs.)

The Prestige 14 Evo is a functional, portable device with a heck of a processor inside. It’s always impressive to see so much power in such a thin chassis. That said, the Evo doesn’t seem quite ready to accommodate the chip, or the demanding tasks that you might want to do if you’re looking for a 1185G7. It’s able to game, and it’s able to export, but I can tell that the fans are struggling to keep up.

For that reason, I have trouble seeing a case for the Prestige 14 Evo over competitors. The laptop is fine, functional, and impressive on the inside — but from the dim screen and outdated port to the thin audio and coil whine, there are too many compromises for which a hefty chip has to make up. For the majority of laptop buyers who don’t need a slightly better screen or discrete graphics, more affordable 1165G7 systems like the Zenbook 14 come without these kinks but with better battery life and close to the same performance and portability benefits. If you’re willing to pay just a bit more, the MacBook Air performs just as well if not better in most tasks and is a significant step up in almost every other area. The Prestige 14 Evo is in a weird place in the middle, and it doesn’t quite fit.

MSI Prestige 14 review: hot pink and hot in your lap

To start using the Prestige 14 Evo, you’ll need to agree to the following:

That’s seven mandatory agreements and 14 optional agreements to use the Prestige 14 Evo.