A supremely lightweight 15.6-inch gaming laptop that puts form slightly too far ahead of function

MSI’s Stealth 15M is a gaming laptop for people who’d prefer to keep their gaming habit a secret. The metal design looks striking, and, aside from the single-zone RGB backlit keyboard, there isn’t much else about the 15M that’ll give away what you’re probably using it for — aside from its loud fans. Unless you’re running the simplest tasks on battery saver mode, its fans are almost always audibly whirring, and the whining only gets louder with demanding applications and games. You might not notice it if you wear headphones or a headset most of the time, but others around you probably will.

It can be noisy because it’s always warm and trying to keep cool. A thin laptop crammed with powerful components can lead to higher temperatures, especially during gaming. It has an aluminum chassis that helps to diffuse some of that heat, but it still can become uncomfortably warm to touch at times, despite its fans’ best (and loudest) efforts. 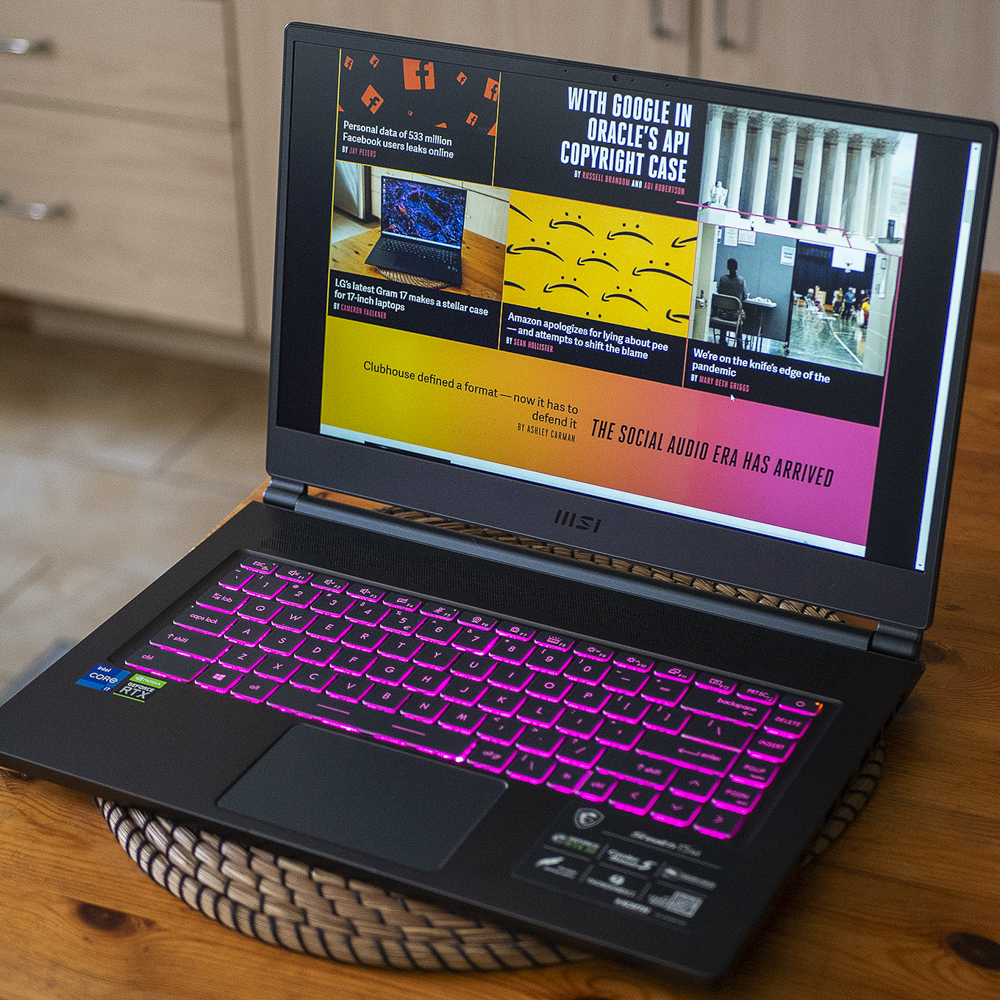 If MSI’s GS66 Stealth is going for the jugular of Razer’s high-end Blade 15 Advanced, the Stealth 15M aims to take on the more affordable Razer Blade 15 Base model that I recently reviewed. And it’s the closest that MSI has come to meeting Razer where it excels with build quality, design, and port selection. Unlike the GS66, the 15M has a more cohesive-feeling build that doesn’t make me question its durability over time, and it is shockingly thin for a gaming laptop. Yet, for as much as I complained that Razer’s unibody design needs a shake-up, its $1,699 option simply offers more for your money. You’ll get more ports (including an HDMI 2.1 port for 4K output at up to 120 frames per second), a larger trackpad, user-upgradeable RAM and storage, and more power allocated to its RTX 3060 than you’ll get in MSI’s similarly priced Stealth 15M. The Blade 15 Base is almost a full pound heavier and a few millimeters thicker. But I wouldn’t let those traits alone stand in my way if I was getting ready to buy.

But that’s not your only option in this price range. You’ll get great performance in a similar price range with the Asus ROG Zephyrus G15 that has an Nvidia RTX 3070 and a QHD screen. But if you have the luxury of time to wait until early May, it’s worth seeing how Dell’s $900 G15 Ryzen Edition with the RTX 3060 will fare. Dell’s option is bigger, thicker, and likely heavier (though Dell hasn’t shared the official weight) than any of these thin gaming laptops, but there’s a big upside: it’ll be just $900 for the starting configuration. Conversely, MSI’s laptop has more constraints on its power, yet those limitations help it look and feel like a high-end laptop that you can lug around more easily.

For gaming alone, the Stealth 15M isn’t powerful enough to recommend to everyone. It can reach the ideal 60 frames per second threshold with some demanding titles that I threw at it, but it wasn’t particularly smooth until I made a few minor compromises to the visual quality. Likely because of the Stealth 15M’s thin design, MSI set the maximum power draw of the RTX 3060 inside of it to just 65W, which is almost the lowest-possible power requirement the spec allows. (The slightly thicker Predator Triton 300 SE is at 75W, but the aforementioned G15 Ryzen Edition coming in May runs at 115W.) Performance will be good enough for some people, but unless you play older or less demanding games than the ones I tested below, you won’t take full advantage of the 144Hz refresh rate matte display that MSI put in this model.

Running Red Dead Redemption 2 on the 15M with the 3060 yields around 57 frames per second with the graphics set to ultra settings. In another open-world game, Horizon Zero Dawn, you’ll get around 68 frames per second with settings set to their maximum. For a test of the RTX 3060’s ray-tracing capabilities, Shadow of the Tomb Raider with DLSS and ray-tracing shadows set to ultra ran at 57 frames per second. Gaming pushes the 15M to the edge, as its loud fans indicate every step of the way. I didn’t notice any apparent bottlenecks in performance due to the heat, which is good.

Not all Nvidia RTX 30-series graphics chips are the same. While its desktop GPUs offer consistent performance, the power of, say, an RTX 3060 or a 3080 is set by the laptop manufacturer. Performance can vary wildly from one laptop to the next, but generally, thicker laptops will likely be more powerful. But you’ll only know for sure by looking at the specs. Nvidia initially allowed companies to hide those vital specs that tell how powerful (or not) their graphics chips were, but it reversed its position following backlash. Nvidia now requires manufacturers to be more transparent about a laptop’s GPU limitations.

If you’re comparing these numbers to some of our other reviews, you probably noticed how similarly this laptop performed to the likes of the Asus TUF Dash F15 that has an RTX 3070. That’s due to their similar clock speed and wattage requirements. It’s encouraging that the RTX 3060 can keep up, but I’m skeptical that it’ll be able to maintain pace over the next few years, as games become even more graphically demanding to run. Even if some RTX 3070 and 3080 chips run at similar clock speeds and similar wattages as an RTX 3060 right now, they’ll always have more CUDA cores and VRAM to spare, which should give them a sturdier backbone to weather next-gen games in the future.

This high-end configuration (which MSI says is available at Costco) comes with the quad-core Intel Core i7-11375H processor and Nvidia’s RTX 3060, just like Acer’s 14-inch Predator Triton 300 SE. The big advantages internally, aside from its bigger 15.6-inch FHD screen, are its 32GB of RAM and 1TB of NVMe storage. It’s more than enough for handling basic tasks like browsing the web, and I didn’t catch it chugging with a myriad of Chrome tabs running. Doing other everyday tasks like hopping into a Zoom call, using Slack, and running Spotify worked as well as they should (and the speakers are better than ones I’ve heard in most gaming laptops recently but are still not particularly great). All said, the moment-to-moment use of the Stealth 15M feels similarly speedy to that of other laptops in this price range.

Everything from games to videos look great on this matte display. It has generous viewing angles, thin bezels, and the colors look accurate. I wish its bottom chin wasn’t as thick. Perhaps MSI could have managed to fit in a 16:10 aspect ratio display, given how large it is. The webcam has an indicator light that flashes on and off endlessly when it’s active instead of just remaining lit, like most other laptops do. MSI says it intentionally designed it this way “to remind the user that the webcam is being used by the software (such as Zoom) that has the access to the webcam.” At least you’ll never accidentally forget that the camera is on, but it is annoying if you’re not the forgetful type.

The keyboard layout might take some getting used to (every laptop seems to have a different idea of where to put the function key and how to arrange the volume and screen brightness keys), but the keys themselves are big and nicely spaced out, with a satisfying amount of key travel. The trackpad works well, but I would have liked to see MSI stick its almost comically large trackpad found in both the GS66 Stealth and Prestige 14 Evo in here. There’s room here, so why not? I would have also welcomed the fingerprint sensor built into the Prestige 14 Evo’s trackpad.

The Stealth 15M won’t pass as the thin ultrabook that the Prestige 14 Evo is, but it’s still surprisingly thin for passing as a gaming laptop. The 15M is 16mm thick (its closest competition, the Razer Blade 15 Base, is about 19mm), and it weighs 3.7 pounds. This makes it one of the lightest 15.6-inch gaming laptops I’ve had the opportunity to test yet.

The selection of ports around the 15M includes one Thunderbolt 4 port with power delivery (PD) support for recharging other devices (but not the laptop itself) and another USB-C port that supports connecting to an external display. All configurations also include a UHS-III microSD card slot, two USB Type-A 3.2 Gen 1 ports, one audio combo jack, and an HDMI 2.0 port with support for up 4K resolution at 60Hz.

As for longevity, the Stealth 15M’s three-cell 52Wh battery is good for a handful of hours with moderately intensive use. With one hour-long Zoom call tossed into the mix of some otherwise normal Chrome and Slack usage, it lasted about four and a half hours. If all you’re doing is typing, I could imagine it lasting for close to six.

MSI includes a slim 150W power brick that’s a little smaller in the length and width department than my Pixel 3, but it’s about as thick as three of them stacked. It’s considerably smaller than the bricks included with more powerful gaming laptops, but this one had no trouble keeping the 15M’s battery topped up while gaming. That can be a problem with some models, which sometimes come paired with a power adapter that can’t keep enough wattage going in to match what’s being spent by the hardware during gaming. Additionally, this 150W charger recharges the 15M quickly, taking just about an hour and fifteen minutes during my testing.

The Stealth 15M is a well-designed laptop without many glaring issues, but for the price of this configuration (and even the less costly ones, which are still fairly costly), you won’t be getting a ton of bang for your buck if you’re a gamer who wants great performance. MSI went with a thinner, more subtle design than some other gaming laptop designs, and that’s one of the best things about the Stealth 15M. But if you’re eager to spend this much on a gaming laptop, either spend a few hundred more to get one that has a QHD screen with a better GPU or wait until Dell’s more affordable G15 Ryzen Edition releases in May.

Update, 7:40AM, April 16th, 2021: MSI confirmed that the flashing webcam light is not a bug, but intentional design. The review has been updated to reflect that.

To start using the Stealth 15M, you’ll need to agree to the following:

That’s five mandatory agreements and 14 optional agreements to use the Stealth 15M.

Goku’s maybe getting a gun... in Fortnite