Roku’s new Voice Remote Pro is the company’s first remote control to come with always-listening mics built in. These let you easily launch a streaming app or find the remote itself, should it get lost in the couch cushions, using just your voice. The new $29.99 remote, a standalone purchase that works with Roku streamers and Roku TVs, also has a headphone jack for private listening and includes buttons for controlling your TV’s power and volume. And to round it all out, Roku throws in two customizable shortcut buttons that you can program to remember any voice command and repeat it with a press. Perhaps best of all, you won’t need to hunt for AA batteries anymore: the Voice Remote Pro replaces them with a rechargeable battery that can last for up to two months on a charge. 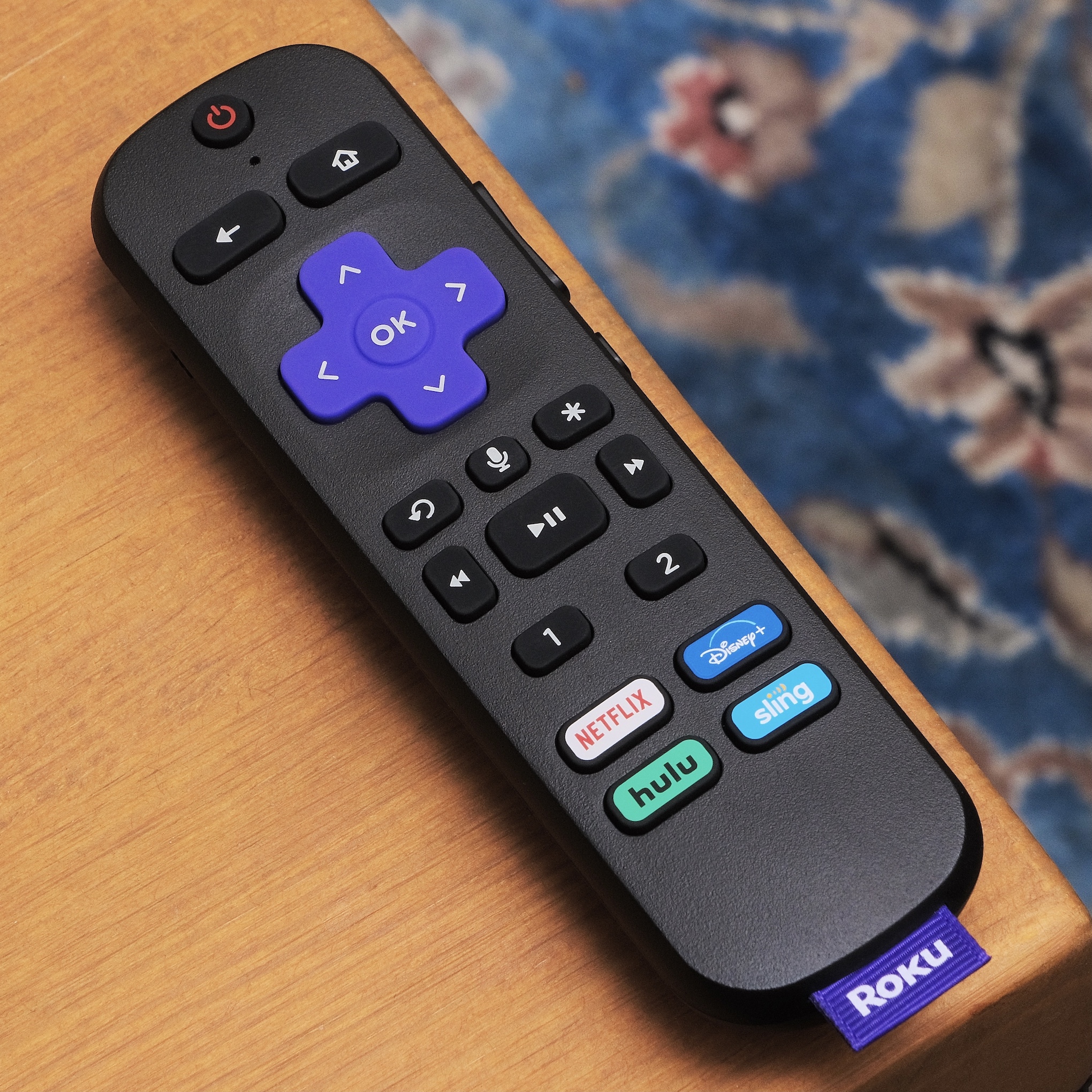 It definitely looks the part of a Roku remote. Weight-wise, the Voice Remote Pro felt about the same in my hand as the remote that came with my TCL Roku TV. But instead of a removable back cover, there’s a Micro USB port at the bottom of this one. Yes, I very much wish it was a USB-C jack instead, but Roku chose the older plug. Either way, it’s largely hidden from view when you’re using the remote since it’s behind the purple Roku tag.

On the left side is a 3.5mm jack that will pass the audio from your Roku TV or Roku streaming device to whatever headphones you plug in. Private listening remains a huge convenience, though other platforms like the Chromecast with Google TV, Fire TV, and Apple TV support Bluetooth earbuds to achieve the same end result; if you need to keep a room quiet but still want to enjoy a show or movie, you can have your own private bubble of sound without disturbing others.

There’s another new addition on the remote’s left side: Roku has included a sliding switch to enable or turn off the Voice Remote Pro’s always-listening mode. Some people aren’t comfortable with microphones constantly being on in their home and listening for a wake phrase. If you switch off hands-free mode, you can still press and hold the microphone button on the front of the remote to speak commands. On the right side are a volume rocker and mute button.

All of the buttons on the face of the Voice Remote Pro are the same size as those on my TCL Roku remote, though this remote is a bit taller since it adds two programmable buttons above the four branded shortcut buttons. Roku’s marketing images show an Apple TV Plus button alongside Netflix, Disney Plus, and Hulu. But the remote I received to review actually had Sling TV on there instead of Apple’s service. Roku tells me it’ll be changing this in future shipments, which I take as a sign of how recently its deal with Apple came together. The buttons aren’t remappable, so if you want the Apple one, it’s probably best to wait.

Some people don’t mind these branded buttons since they’re easy to use and straightforward: others complain that there’s always some app or service in the foursome that they either don’t have or never use. Sometimes the buttons manage to outlive their advertised services: Roku has had Blockbuster, PlayStation Vue, and Rdio on its remotes before — all services that no longer exist. I can understand both arguments, but considering how much money Roku rakes in from those quick-access shortcuts, the sponsored buttons are here to stay. Thankfully, Roku has at least made a good decision by including two customizable buttons to go along with them.

The buttons labeled “1” and “2” can save any voice command that Roku supports; just long-press either button after the voice command, and it’ll be set as that button’s function. This can be as simple as using them as two shortcuts for apps that don’t have their own button, like “open HBO Max” or “open Peacock.” But you can also use the shortcut buttons for searches (“show me free movies”), input selection (“switch to antenna TV”), or TV controls (“turn the volume up,” “turn on closed captioning”). I like the flexibility.

The Voice Remote Pro’s built-in microphones did a fine job picking up my voice when on the coffee table several feet away from me; I didn’t have to shout or over-enunciate anything for my voice commands to register successfully. Roku says the “mid-field microphones” can work at distances up to 12 feet, but at that point, you’d probably need to raise your voice some.

Don’t expect Roku’s voice platform to be a replacement for the Google Assistant or Alexa, though. Aside from opening channels or searching for content, it’s all still rudimentary stuff. You can ask it what the time is, but it can’t give you the weather. “Turn the volume up” worked perfectly on my TCL Roku TV, but “turn the brightness down” didn’t. Certain apps like Disney Plus, Hulu, and HBO Max can start playing content directly after a voice request, but “watch The Crown on Netflix” requires you to click in from the voice search result. (You can say “Hey Roku, OK” to select whatever’s currently highlighted, so you can technically still start watching using only your voice.)

In using the Roku Voice Remote Pro, you’re agreeing to:

The final tally is one mandatory agreement.

“Hey Roku, find the remote” easily proved to be my favorite voice command. Assuming the remote is in a spot where it can hear you say that, it’ll emit a sound for 60 seconds or until you press a button to indicate it’s been found. The Roku Ultra has a button on the streaming box itself for this purpose, but this is even easier — assuming you’re okay with the always-on mics. You can also trigger the remote beeping with Roku’s smartphone app.

Amazon recently announced that it’s adding sponsored shortcut buttons to the Fire TV remote, and that means Roku and Amazon are pretty much identical when it comes to clicker functionality. Both can control your TV’s power and volume, both have the dedicated sponsored buttons. Roku’s Voice Remote Pro pulls ahead with the customizable buttons that Amazon’s remote lacks, however. And Amazon still requires you to press and hold the mic button for Alexa commands; there’s no hands-free option. It’s a bit surprising that Roku beat Amazon to a remote that you can talk to from across the room, though the Fire TV Cube builds hands-free commands into the streaming device itself.

Roku’s Voice Remote Pro is being released just after Logitech confirmed that it’s finished making Harmony remotes. And in part, these streaming remotes are why; thanks to HDMI-CEC, they can cover enough ground for a lot of people that universal remotes aren’t the essential living room gadgets they were 10 years ago. And TVs are increasingly getting “smarter” with built-in support for Alexa, Google Assistant, and Apple HomeKit, so you can include them in smart home routines.

Purely from an ergonomic standpoint, my favorite streaming player remote remains Nvidia’s backlit remote for the Shield TV. Yes, it’s got a Netflix button — but that’s it for sponsored buttons. And Nvidia lets you fully customize what the settings button does. You can decide what a single tap, press and hold, or double press will do. These can be set to open different apps if you want, or you can pick from many other functions. There’s no headphone jack, and Nvidia is still using regular old AA batteries, so Roku still comes out ahead in some ways.

The Apple TV remote steers clear of streaming app buttons, but it’s too small, easily lost in the far reaches of the couch, and just not great to use. Google’s remote for the latest Chromecast is simple enough, but the furthest it goes with “customizable” buttons is letting you choose which YouTube app — YouTube, YouTube TV, YouTube Kids, YouTube Music, etc. — the YouTube button will open.

The Voice Remote Pro is the best execution of a Roku remote so far, even if it can’t approach the scope of what a Harmony is capable of. The programmable buttons, private listening, and hands-free voice commands are enough to justify the $29.99 price and upgrade from a standard Roku remote. Not everyone will be comfortable with a remote that’s always listening to them, but with the money you’ll save on batteries, it basically pays for itself.