The K3 is remarkably thin, but at the cost of versatility

Keychron’s keyboards are an appealing option for anyone looking for a relatively affordable wireless mechanical keyboard. Its latest model is the Keychron K3, which starts at $74. The K3 combines the low-profile design of the K1 with the compact 75 percent layout of the K2. The result is a keyboard with a slim and compact form factor, with a height that sits somewhere between a typical mechanical keyboard and a keyboard with laptop-style switches.

It’s a tempting prospect if you’re after a compact, portable board that won’t take up too much space in a laptop bag. The K3 also features several other useful features like hot-swappable switch options that let you completely change the feel of your keyboard without having to do any soldering and cross-compatibility with Windows and Mac. But unless you really want or need a thin keyboard, the K3’s low-profile design comes with compromises that hold the keyboard back from being the perfect choice for everybody.

Our review of Keychron K3 (RGB) 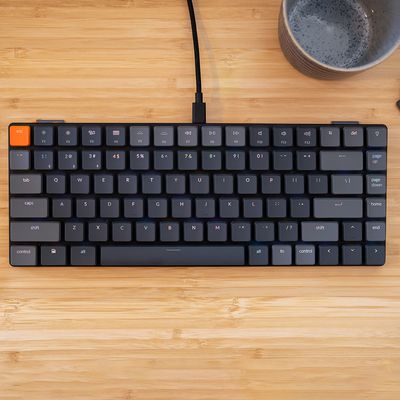 The Keychron K3 is available with either a white backlight for $74 or an RGB backlight for $84. In terms of switches, you have the choice of a set of low-profile switches made by Gateron or a set of Keychron’s hot-swappable optical switches. Keychron claims these optical switches are more responsive and durable, but more important is that, unlike the Gaterons, they’re hot-swappable, meaning you can remove and replace them without having to do any soldering. Varieties of these optical switches include linear (white, red, or black), tactile (brown), or clicky (blue or orange) switches. That’s a good amount of options, and Keychron is currently selling sets of these for $19 (regular price $25).

My model came with a US ANSI layout with RGB backlighting. I primarily used Keychron’s brown optical switches during my time with the K3, but I switched to its stiff clicky orange switches for a few days to see what they were like. Keychron tells me a version of the keyboard with a UK ISO layout will release in July.

If you’re familiar with the keyboard layout used by most laptops, then you’ll immediately feel at home with the Keychron K3’s so-called “75 percent” keyboard layout. It’s a lot more compact than a full-size keyboard layout (one that has a number pad on the side) or even a tenkeyless (same thing, minus the number pad), but it still includes arrow keys and a function row, as well as five out of the six keys normally placed above the arrow key cluster. (There’s no dedicated “Insert” key, but the built-in shortcut is Fn + Delete.) The function row also offers Mac- and Windows-compatible media keys, like brightness and volume control.

For many people, especially those accustomed to a laptop, I suspect this will be all the keys they’ll require, and I never found myself needing a key that’s not present on the keyboard. I also don’t think there are any keys that are wildly misplaced, like the original K1’s annoyingly easy-to-hit backlighting key. That’s helpful because the Keychron K3 doesn’t let you natively remap its keys, meaning you can’t reconfigure the keyboard to change key locations or add others that might be more important for your needs.

Keychron advertises that you can technically remap your keyboard’s keys at the OS level using programs like Karabiner on the Mac or SharpKeys on Windows, but it’s a bit hacky and means your keyboard’s layout will change if you ever need to connect it to another device. I don’t think most people will have major problems with Keychron’s 75 percent layout, but beware if you’ve got muscle memory built up from using another compact board.

There is one layout customization option built into the keyboard, and that’s a small switch on the top-left of the keyboard to swap it between Mac / iOS and Windows / Android layouts. The keyboard also comes with Mac-specific Command and Option keycaps out of the box, but if you’re a Windows user like me, there are Alt and Windows keys included for you to install on the board during setup. Just use the included keycap puller to whip off the Mac keys and press the Windows keys firmly onto the switches in their place. (Here’s a quick video guide in case you’ve never done this before.)

The other switch on the top left of the K3 is a slider to swap it between its wired and wireless modes. Wired mode works as expected over the K3’s included USB-C cable, while wireless mode lets you pair with up to three devices over Bluetooth 5.1. I paired the K3 with a Surface laptop, iPhone, and iPad, and the keyboard switched between them with no issues.

Wireless users should note that battery life has taken a dip compared to the K2. With the backlight off, Keychron says the K3 should last around 99 hours, down from 240 hours with the K2. With the backlight on, battery life drops as low as 34 hours (down from between 68 and 72 hours). That’s likely because the K3’s slim form factor means Keychron can only fit in a 1,550mAh battery rather than a 4,000mAh one like the K2. I was switching between wired and wireless modes throughout the review period, which meant I never saw the keyboard’s battery life run down to zero. But these numbers mean you’ll likely have to recharge the K3 on a weekly basis if you want to keep the lights on.

On the underside of my review sample, there is a pair of flip-out feet to adjust the angle of the keyboard. I’m told these were added as a revision compared to the first boards, which came with two sets of feet for you to swap between if you wanted to change its angle. I can’t speak for how annoying a system this might have been, but the new feet support two different angles, and they’re easy to use. Keychron tells me it still has stock of the model without flipping feet and that this new model should be in circulation by late May. Build quality is otherwise solid, with little flex in the keyboard’s casing on my model.

One of the nicest things about buying a mechanical keyboard with traditional Cherry MX-style switches is the customization options you get. If you want a more colorful or interesting set of keycaps or if the keycaps on your board wear out over time, then it’s normally easy to swap them out for a new set. Swapping out actual switches after the fact is generally a little harder because it often requires soldering, so it’s not popular in quite the same way.

In some ways, the Keychron K3 flips this dynamic on its head. Its hot-swappable keyswitches are easy to swap out without needing to pick up a soldering iron, but while its keycaps are just as easy to remove, there’s not much reason to. That’s because there are no third-party keycaps on the market that are fully compatible with Keychron’s low-profile design at the moment. The Cherry MX-style cross design suggests they should be, but when I tried some I had lying around, the stabilizer alignment on keys like the spacebar didn’t line up. Keychron tells me it plans to release new keycap sets later in the year for the board.

It’s a shame because it would be nice to have the option of replacing Keychron’s stock keycaps. They are made of thin ABS plastic rather than the more premium PBT or thicker ABS, and their gray-and-orange color scheme is plain dull. At least their legends are crisp, they’re nicely curved to let your fingers find their placement, and their double-shot construction allows the keyboard’s backlighting to shine through and illuminate each key label.

Swapping out the switches themselves was much easier than pulling out a soldering iron, though it still took a little bit of elbow grease to remove some of the more stubborn ones using the included tool. It works by clipping the metal hook around each switch and wiggling until it comes free. Swapping out all the switches took me around half an hour while watching TV in the background, plus an extra 15 minutes on either end to deal with the keycaps.

As well as being hot-swappable, the benefit of these low-profile switches is how thin they allow the board itself to be. At its thickest point, it’s a little over 22mm off the surface of your desk, and Keychron boasts that its low-profile optical switches are just 10.77mm tall, compared to 17.9mm for a conventional switch.

But being so low-profile makes these optical switches a bit of an acquired taste. Whether I used the brown optical switches that originally came installed in the board, or the stiff and clicky optical orange switches, I never loved the typing experience of the Keychron K3. It’s not awful. This isn’t a mushy rubber dome or MacBook butterfly keyboard. But the limited key travel of the K3’s low-profile switches feels unsatisfying if you’re used to, and like, regular Cherry MX-style switches.

Here’s what typing sounds like on the Keychron K3 with low-profile optical brown switches:

Here’s what typing sounds like on the Keychron K3 with low-profile optical orange switches:

Of the two switches I tried, I preferred the stiff and clicky orange switches over the tactile browns. The stiffness of the orange switches combined with the more tactile click went some way to making up for their low travel, while I ended up making more typos while typing on the browns.

At the end of the day, I just plain like the height of a standard MX switch. That extra distance gives your fingers space to make mistakes and pull back before pressing the wrong key. In contrast, there’s something jarring about having a key bottom out so quickly. If you’re used to typing on slim keyboards like Apple Magic Keyboard, then the K3’s low key travel might feel more pleasant and familiar. But as someone who likes regular MX-style switches, I wasn’t a fan.

The Keychron K3 is a feature-packed mechanical keyboard at a reasonable price. It works great over USB-C or wirelessly, and it has a 75 percent layout that covers the keys most people need, as well as a useful selection of function keys on top of that. The hot-swapping process is easy, and Keychron has a suitable selection of switches that work with its hot-swap system.

But Keychron has had to make a series of compromises to make a keyboard this slim, and you have to want a low-profile keyboard to put up with them. Battery life has taken a dip compared to the K2, and the K3’s low-profile switches can be an acquired taste. The lack of support for third-party keycaps is also unfortunate.

If you’ve got a strong preference for a low-profile keyboard and you’re not interested in trying out third-party keycaps, then the K3 is a nice package. But it can’t match the versatility of Keychron’s other boards.