A good phone for the price, but if you can spend a bit more you’ll get some worthwhile upgrades

The Moto G Play is the least expensive of four phones that Motorola introduced for the US market earlier this year. Introduced at $169, it’s already enjoying an apparently permanent $10 mark down, placing it firmly in budget territory.

Most of what you’ll find on the G Play’s spec list makes a lot of sense given that price point: a 6.5-inch 720p LCD with standard refresh rate, Snapdragon 460 processor with 3GB of RAM, and a generous 5,000mAh battery.

There’s another factor that might sway some shoppers toward the G Play, too: as LG leaves the budget phone space and its remaining stock disappears from retailers’ shelves, Motorola’s budget-friendly phone will be one of a smaller number of options. In the US. we haven’t seen the kind of sub-$150 devices from Motorola that the company has introduced in other markets this year, so for now, the G Play is a likely candidate for the budget-oriented phone shopper’s consideration. 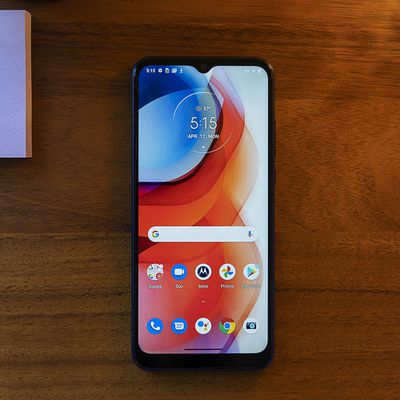 There are a couple of aspects of the phone’s feature set that feel underwhelming even considering the price: namely, a paltry 32GB of storage (though it can be expanded after the fact) and a 13-megapixel main camera when more advanced, high-resolution pixel-binning sensors are becoming the norm at every price point, for example. But in short, the G Play performs just fine for its price. Just know that you’ll need to bring patience and acceptance of a few shortcomings, and that spending an extra $50 to $100 if your budget allows would get you some meaningful upgrades.

The G Play uses a Snapdragon 460 chipset which was introduced over a year ago and is an entry-level Qualcomm processor. Coupled with 3GB of RAM, it manages to keep up with routine tasks like jumping between apps and scrolling social media, albeit with subtle-but-noticeable stuttering along the way. Heavier tasks like starting and stopping Google Maps navigation take an extra couple of beats. It’s not as frustrating as my experience with the LG Stylo 6 was, but it’s a step down from the kind of performance you can expect from a phone that’s $50-100 more expensive, including those in Motorola’s own G-series lineup.

The screen, likewise, gets the job done but doesn’t particularly shine. Its 720p resolution is stretched thin across the 6.5-inch display and images are noticeably pixelated. Colors are on the cooler side and the screen is a bit dim unless you max out the brightness. Even with the brightness cranked all the way up I had a hard time seeing it outdoors. We spend so many hours looking at our devices that this is one area where it might be worth upgrading. That said, there isn’t exactly anything wrong with the display — it’s just not very nice.

There’s better news on the battery front. The G Play includes a 5,000mAh battery, which is significantly bigger than the typical 4,000 or 4,500mAh found in other comparably sized Android phones. Motorola claims it will get three days of battery life, which is probably true if you’re a light user and conservative with your screen brightness. I had no problem getting two days on a charge with a couple of hours each day of screen-on time. A full day and then some of heavy use is definitely reasonable to expect.

Storage is expandable via microSD card, so plan on that extra $10-15 as a necessary part of the purchase

The Moto G Play includes just 32GB of storage — about as low as it gets in 2021. Considering roughly half of that will be taken up with operating system files, it’s just not enough. Storage is expandable via microSD card, so plan on that extra $10-15 as a necessary part of the purchase if you don’t already have one.

The G Play ships with Android 10 installed. While it’s on Motorola’s list to receive an Android 11 update, the timing is unclear and, given the company’s track record, could be many months away. The phone will receive security updates until January 2023. That’s an unfortunately short life span, so you might want to count on trading it in or cashing in your upgrade with your carrier after a couple of years.

The G Play has just one 13-megapixel rear-facing camera (accompanied by a 2-megapixel depth sensor) and a 5-megapixel selfie camera. That’s it. Even in the budget class, that’s not many cameras in 2021. I don’t think anyone (myself included) will miss having the low-quality macro camera that manufacturers keep putting on their devices these days, but not having an ultrawide is a bummer considering it’s not hard to find a phone that offers one at this price.

If nothing else, the G Play’s camera offerings are very straightforward. There are just two main shooting modes in the native camera app: photo and video. Portrait mode and a few other extras are available in the shooting menu, but there’s no night mode here.

Outside in good lighting, this 13-megapixel camera does okay. Overall exposures are balanced and the camera doesn’t try to do too much HDR-ing, which I appreciate, but you don’t have to look too close to notice that details in grass and leaves are smoothed over. Things go downhill quickly in less good light — the G Play just isn’t up to low-light photography. The selfie camera is also guilty of aggressive over-smoothing at its default “Face Beauty Auto” setting that made my face look like a glazed donut. Thankfully, you can turn this off.

Clearly the G Play has its share of shortcomings — at $160, it has to. The question is whether these are trade-offs you can live with for a couple of years. If you enjoy a very casual relationship with your phone, the G Play will do all of the things you need it to do.

If you enjoy a very casual relationship with your phone, the G Play will do all of the things you need it to do

Everyday performance for the basics — light web browsing, social media, email, music — is sufficient. If you just use your phone camera for quick snapshots out and about and don’t expect too much from it, the G Play will do fine.

If you suspect that you need a little more from your phone, or that you want the experience of using your phone to be a little more enjoyable, then I’d strongly encourage spending a bit more on something like Motorola’s own Moto G Power for a better camera. Samsung and OnePlus have recent entries in the sub-$200 class that are worth looking at, too; I haven’t tested them, but they’re specced competitively.

If your relationship with technology is less complicated than those of us who spend hours each day of our precious time on this Earth staring at the little glowing screen in our hands, jumping between social media apps, and pushing our phone cameras to their limits, then you’ll get along fine with the Moto G Play. Just spare a thought for the rest of us, please?

To actually use the Motorola Moto G Play, you must agree to: